At the mention of this historical road in Bangkok, different images surface in people's recollection. Art deco architecture and tree-lined avenue. A brown-coloured McDonald's. A site of political protests. At 121 years old, the road has become a landmark in both the country's history and culture that has housed everything from luxurious malls and hotels, to a boxing stadium, to the Democracy Monument. Museum Siam is currently displaying its "Traces Of Ratchadamnoen" exhibition to explore the people's shared memories along this century-old road.

Ratchadamnoen Road began its construction in 1899 under the order of King Rama V to connect the Grand Palace and Dusit Palace. Over the century, history basically played out here as the road bore witness to the Siamese Revolution in 1932, the construction of Democracy Monument at the roundabout in 1939, the Oct 14 uprising in 1973, and many other events.

"Traces Of Ratchadamnoen tells the story of an important road that everyone knows and has a connection with by combining the history and memory of people who have passed through and lived in it. It's trans-generational. And through these shared memories and experiences, they enable everyone to learn together and understand one another even though they are of different ages," said Rames Promyen, director-general of the Discovery Museum Institute (Museum Siam), under the Office of Knowledge Management and Development, at the exhibition's launch last month.

"As a discovery museum, Museum Siam uses history as content and presents it in different angles with a purpose to create a self-learning experience that people can enjoy while gaining knowledge," he continued. 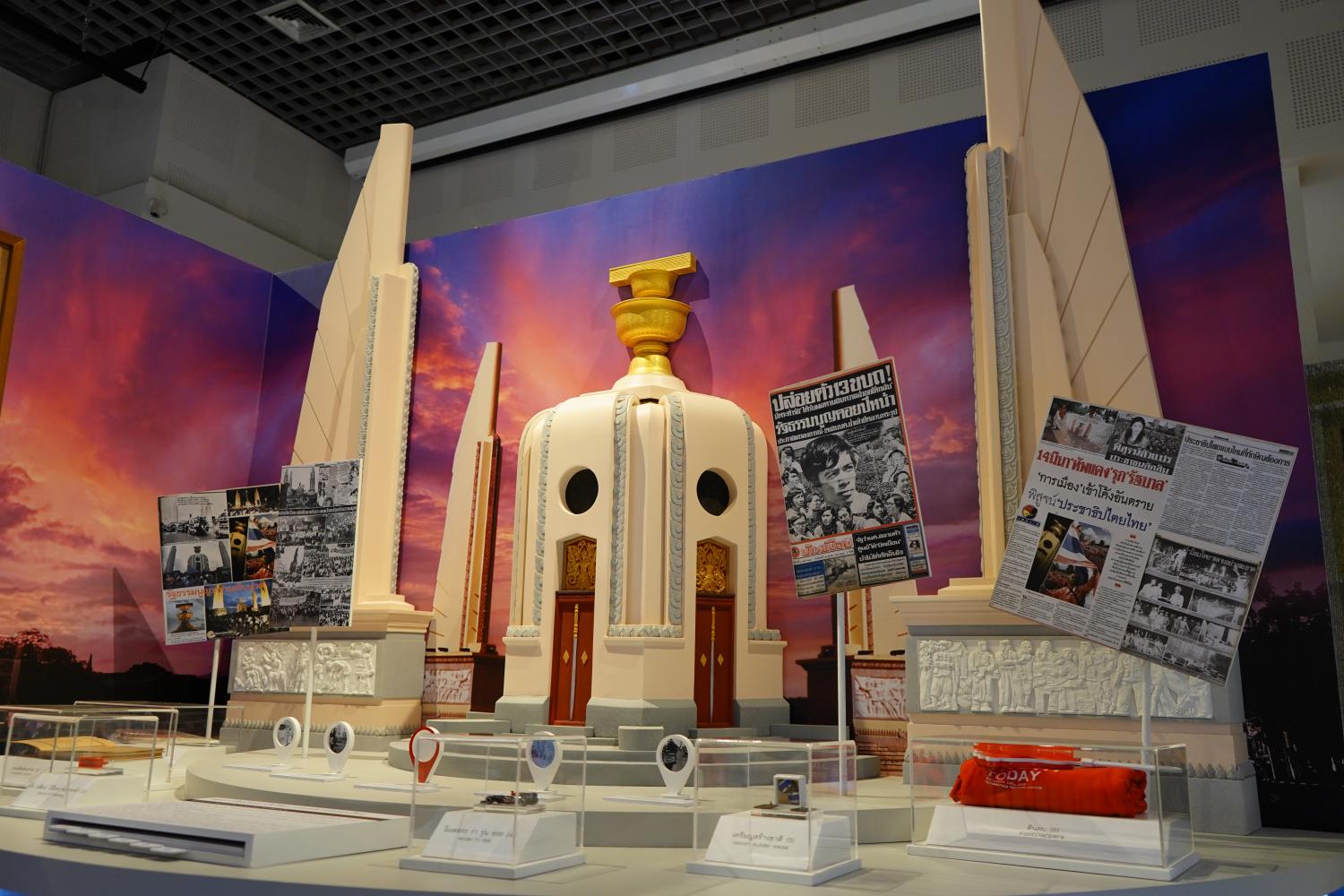 Taking a first step inside the exhibition area, visitors are welcomed by several punching bags installed at the entrance -- a fitting ode to the iconic Rajadamnern boxing stadium while also serving as a symbol of people's countless battles of beliefs, opinions and ideologies that have taken place here. Ratchadamnoen and its Democracy Monument have long served as a site for political demonstrations to this very day. In a sense, the exhibition couldn't have been more timely, being held in our current political climate.

"Ratchadamnoen is the road where ideas collide. Since its construction, it was bringing in Western ideas in an attempt to modernise Siam. Since then, modern ideas kept parading in -- from democracy, gender roles and freedom. They've all been here. It's a stage where people battle their ideas. That is unavoidable when new and old ideas coexist," said curator Taweesak Woraritrueangurai, who took us on tour of the exhibition, adding: "If we can understand this particular road, we can understand Thailand."

Inside, visitors can follow eight available routes, with coloured lines leading the exploration of different parts of Ratchadamnoen, from the views of people from all walks of life, tracing the steps of baby boomers, homeless people, gardeners, elites and more. Along the way, familiar sites like the Rattanakosin Hotel, the statue of Phra Mae Thorani who wrings water from her hair, Sueksaphan Phanit stationery shop, Sky High restaurant and more greet the eyes -- the places that have been here for decades but the public may not always be aware of their stories.

And there are also remnants of landmarks that are long gone, like Thai Niyom Mall, which played a crucial role in the movement towards gender equality by making women leave their home more. Currently, the building that once housed the mall is now serving as an insurance office. 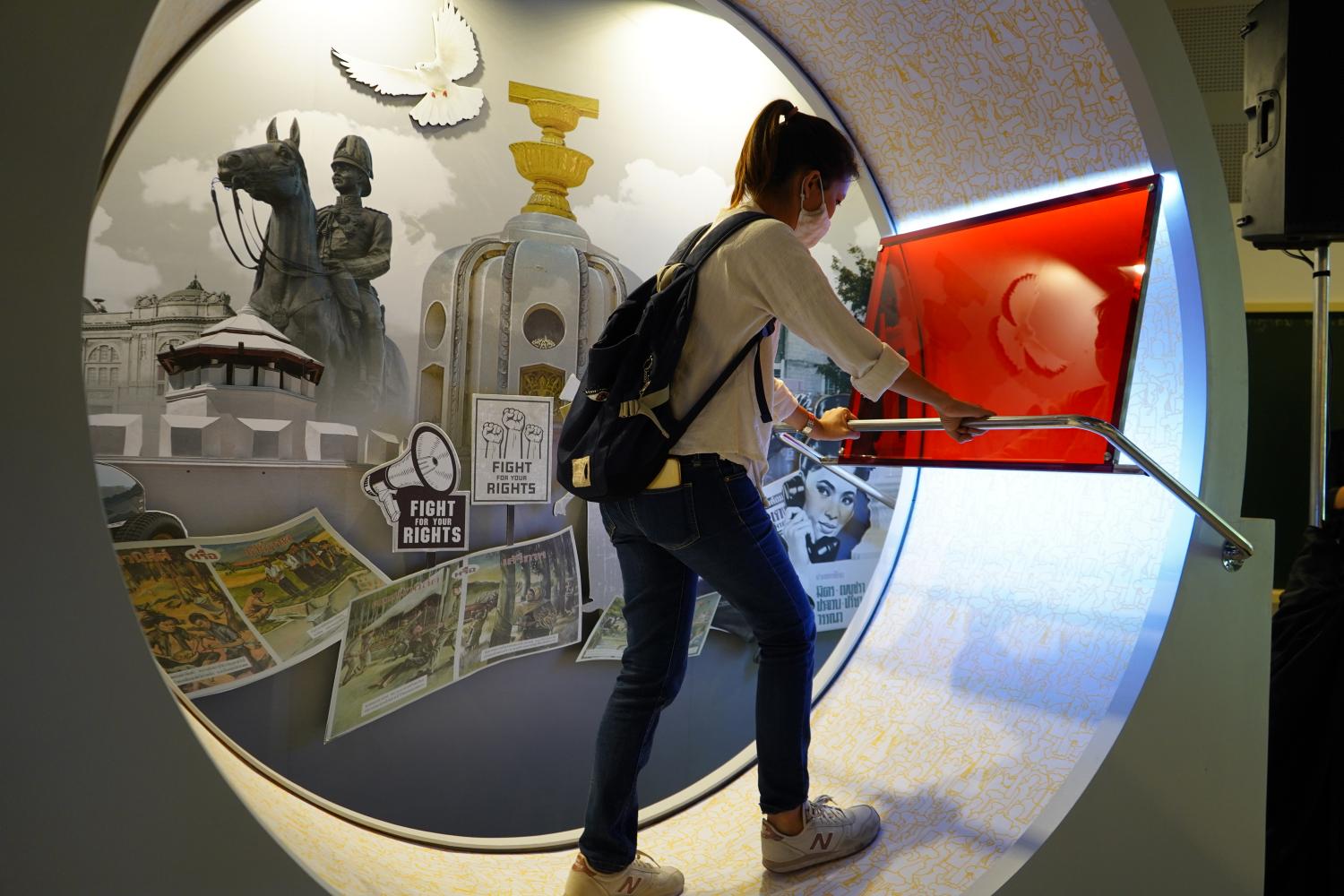 Walking in the wheel of history.

"The launch of Thai Niyom Mall allowed women to leave home and go about in public spaces," said Taweesak. "Before, women's places were in the kitchen. But with Ratchadamnoen prospering, and with the introduction of shopping malls, women left the kitchen and their home and were able to shine in the middle of the city. Subjects like culinary arts and homemaking were legitimised and taken seriously at university level, and not treated as simply random knowledge."

Then, in one part of the exhibition, we came upon perhaps the most controversial landmark on this road: the Democracy Monument.

"Today, we may know it from many political events. But, long before that, the monument was the definition of 'modern'. When people came to Thailand, they had to 'check in' here. To the previous generation, its image symbolises Thailand," said Taweesak. "Of course, that all changed in the Oct 14 uprising."

The items displayed in this zone will probably evoke different feelings for visitors. There are foot clappers and whistles -- must-have protest props of the political demonstrations from years ago. Old newspapers and photos are also displayed with a replica of the monument. The Democracy Monument never sleeps in the history of Thailand, and there's no other monument as iconic. 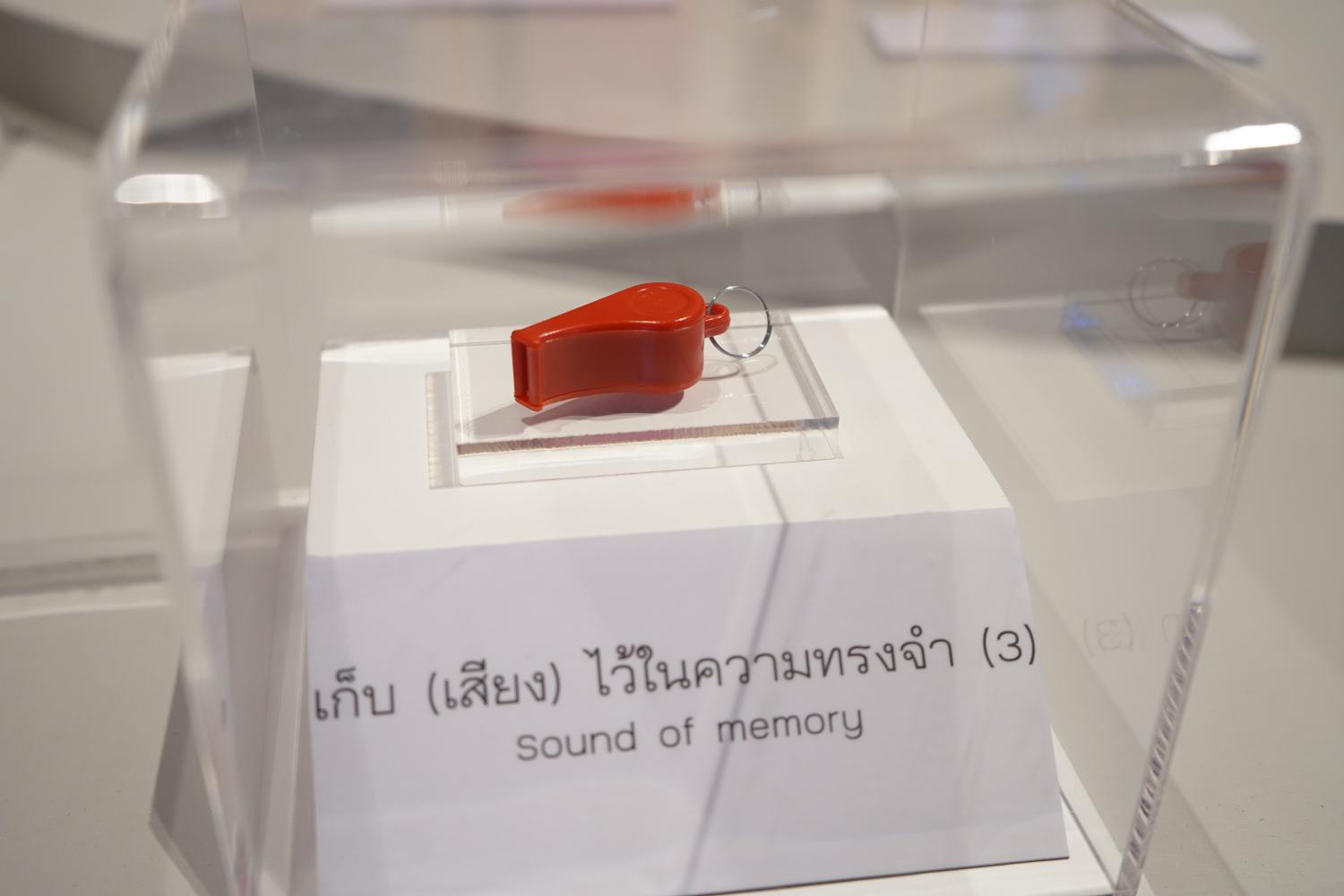 "This is one zone in the museum that we least tell the story of. That's because all of the displayed items are already telling that story themselves. And they're not just items, they're memories," said Taweesak.

Towards the end of the exhibition, there's also an area curated by seniors -- the museum's novel method in dealing with an ageing society. They are also dubbed "youths of the baby boomer era" who helped craft this trans-generational exhibition and added a more personal touch to the display. 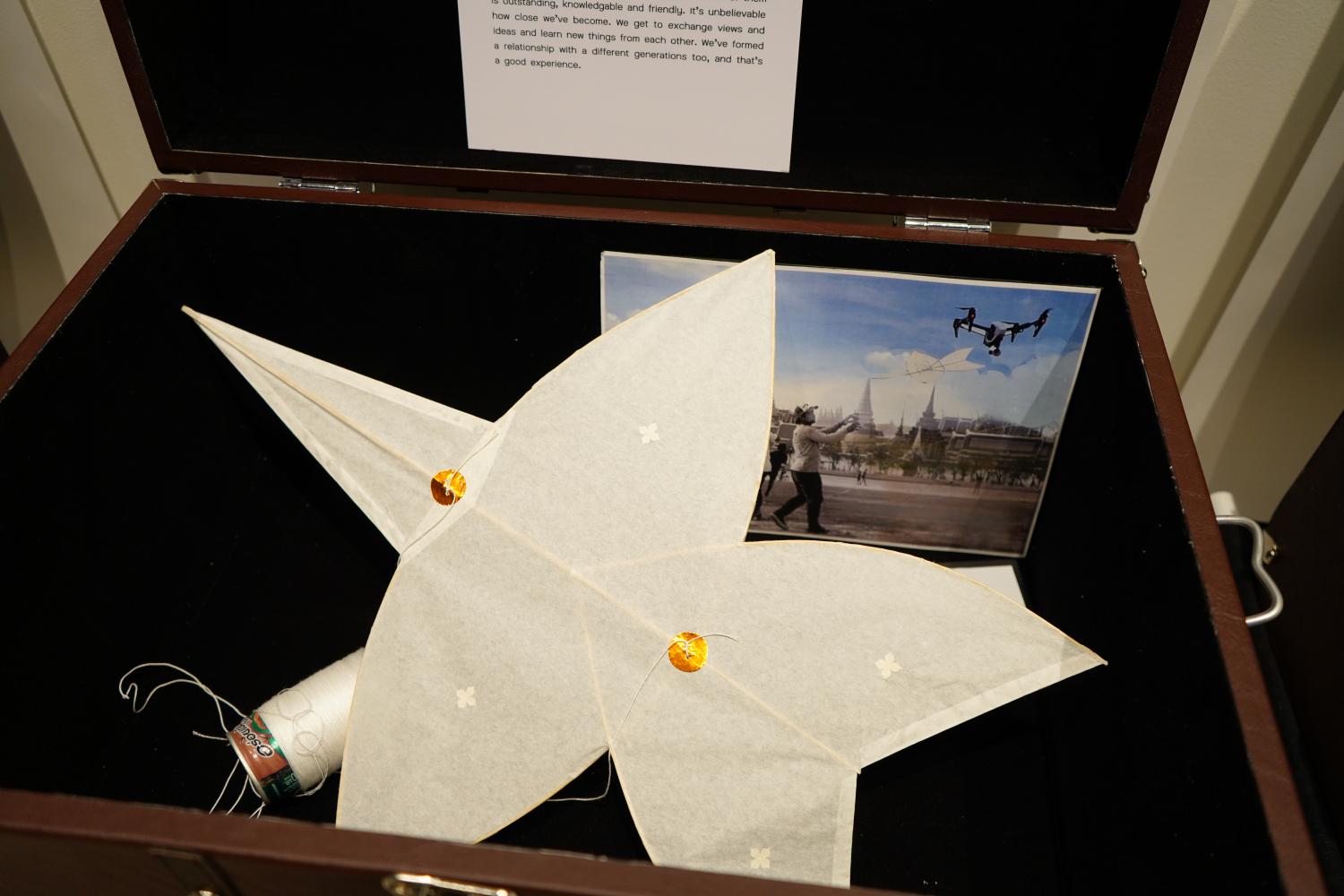 A kite display by a senior curator. 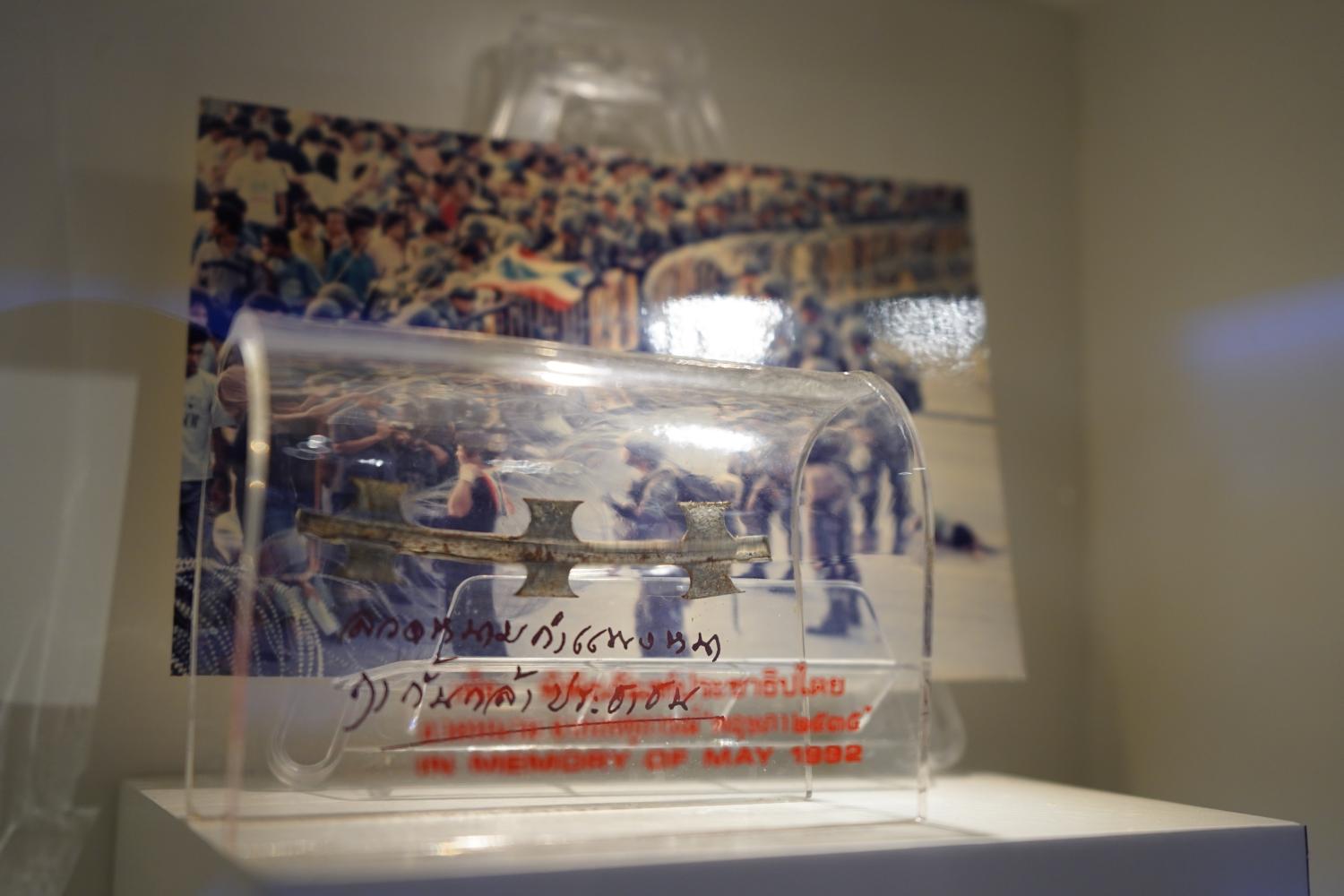 Razor wire from the 1992 Black May protests. 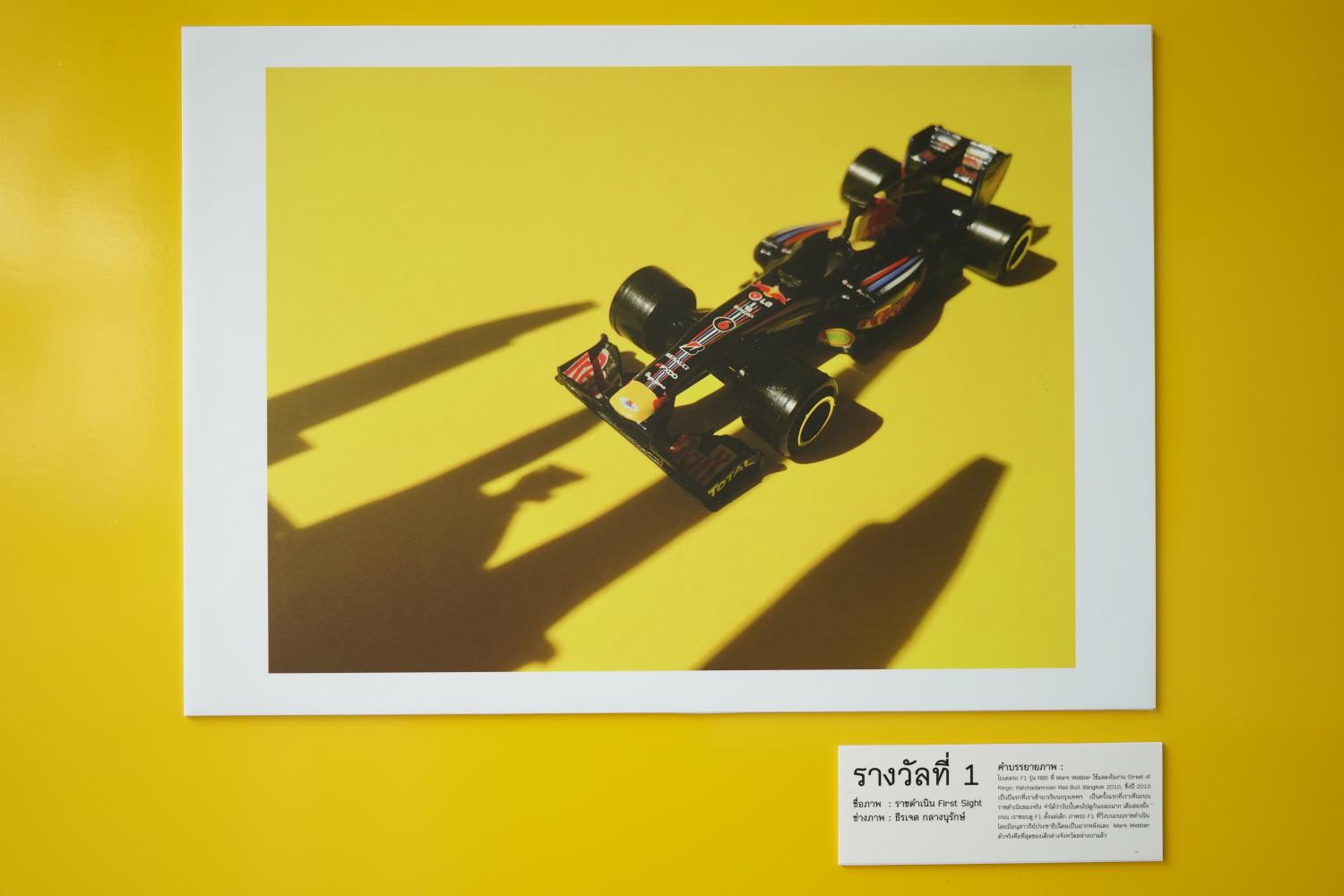 Outside, a photography exhibition shows people's memory of Ratchadamnoen Road. 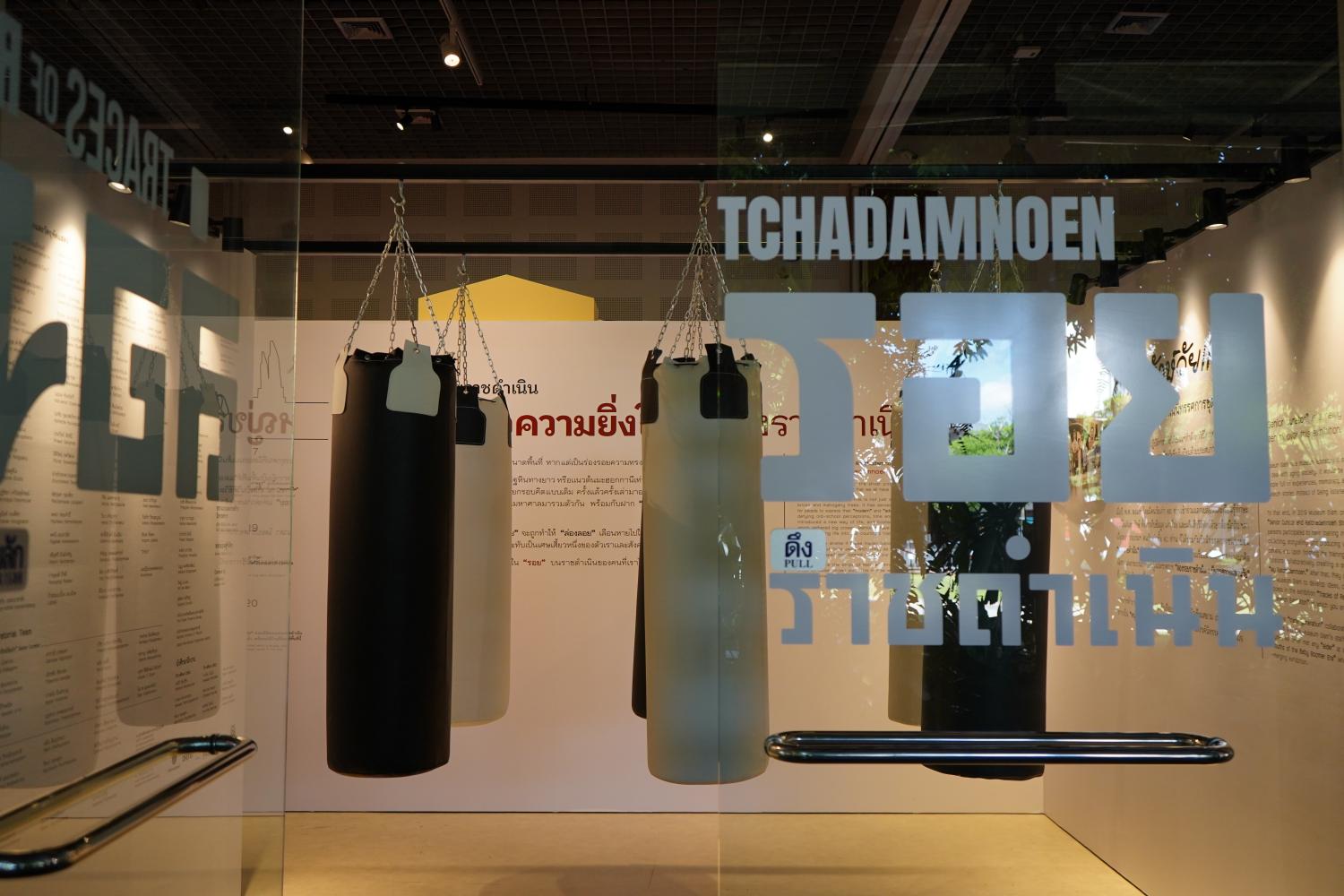 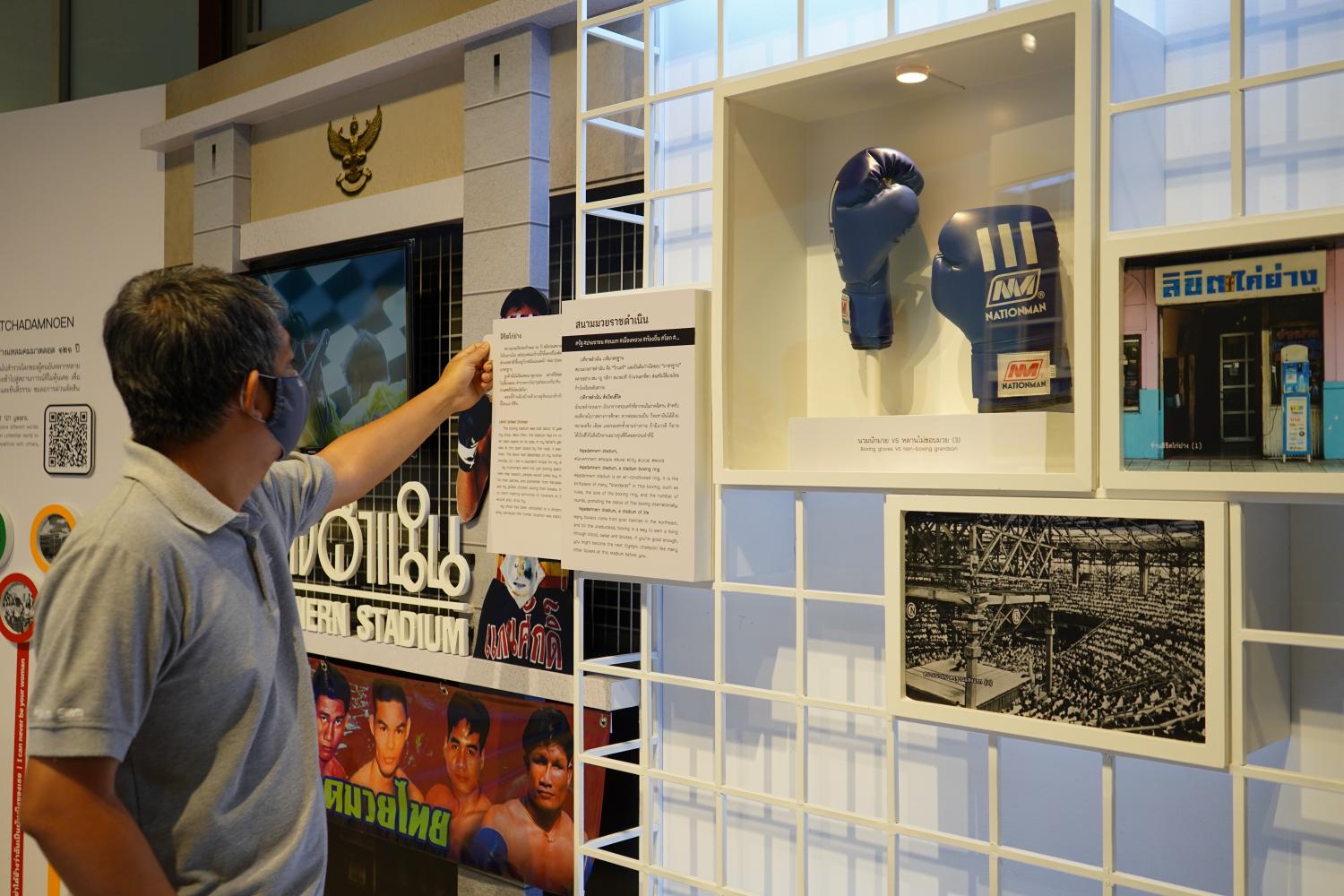 Inside the exhibition area.

"Traces Of Ratchadamnoen" will be exhibited at Museum Siam until Aug 31. The museum is open every day from 10am to 6pm (close on Mondays). Admission is free. The exhibition will move to Bangkok City Library on Ratchadamnoen Klang Road on Sept 8 and will be displayed there until Oct 31.