Like other cities across the world, Bangkok has been affected by the Covid-19 pandemic. As a result, people have been falling into depression over the past several months. So, in order to bring the cheerful spirit back, the Creative Economy Agency is joining hands with a crowd of new-wave and veteran artists in the "Colour Of Charoenkrung" project to revitalise Thailand's old commercial hub.

Along the alleys, the walls of classic shophouses, hip cafes and historical buildings are being covered with 30 colourful murals, visual art illusions, typography and art installations that illustrate the unique lifestyle along the Chao Phraya River and the cultural diversity of the neighbourhood where Buddhist temples have stood alongside Chinese shrines, churches and mosques for over a century.

Charoen Krung, Thailand's first road, was built during the reign of King Rama IV. As a result, the area instantly became a lively community of sea merchants arriving from China, Portugal, India and France.

The project aims to create a new movement and promote the skills of creatives in connecting history, people, culture and business as well as stimulate the local economy.

The highlights include Colour Of Charoenkrung -- the project's namesake work created by new-age artist Cherdsak Moeikunmak, aka 2 Choey. Just a five-minute walk from BTS Saphan Taksin to Charoen Krung 44, Cherdsak spent three days painting a wall at the Bangkok Check Inn to portray the traditional lifestyle of the waterside community through a modern cartoon character.

"My work is a reflection of the thriving waterside community and the lifestyle of the people here. This was Thailand's first road and it boasts a diversity of old and modern cultures with different ethnic groups living together in harmony. This is a place where the East meets West," Cherdsak said.

In the painting, a rabbit is seen riding a long-tailed boat and fishing along the Chao Phraya River with the background of the riverbank boasting a line of temples, mosques, old Thai houses and towering stylish buildings.

"Representing the new generation, the rabbit is standing on a boat-full of fish with a plastic bag around his foot to show that the old lifestyle has been forgotten in today's modern world," he recounted. 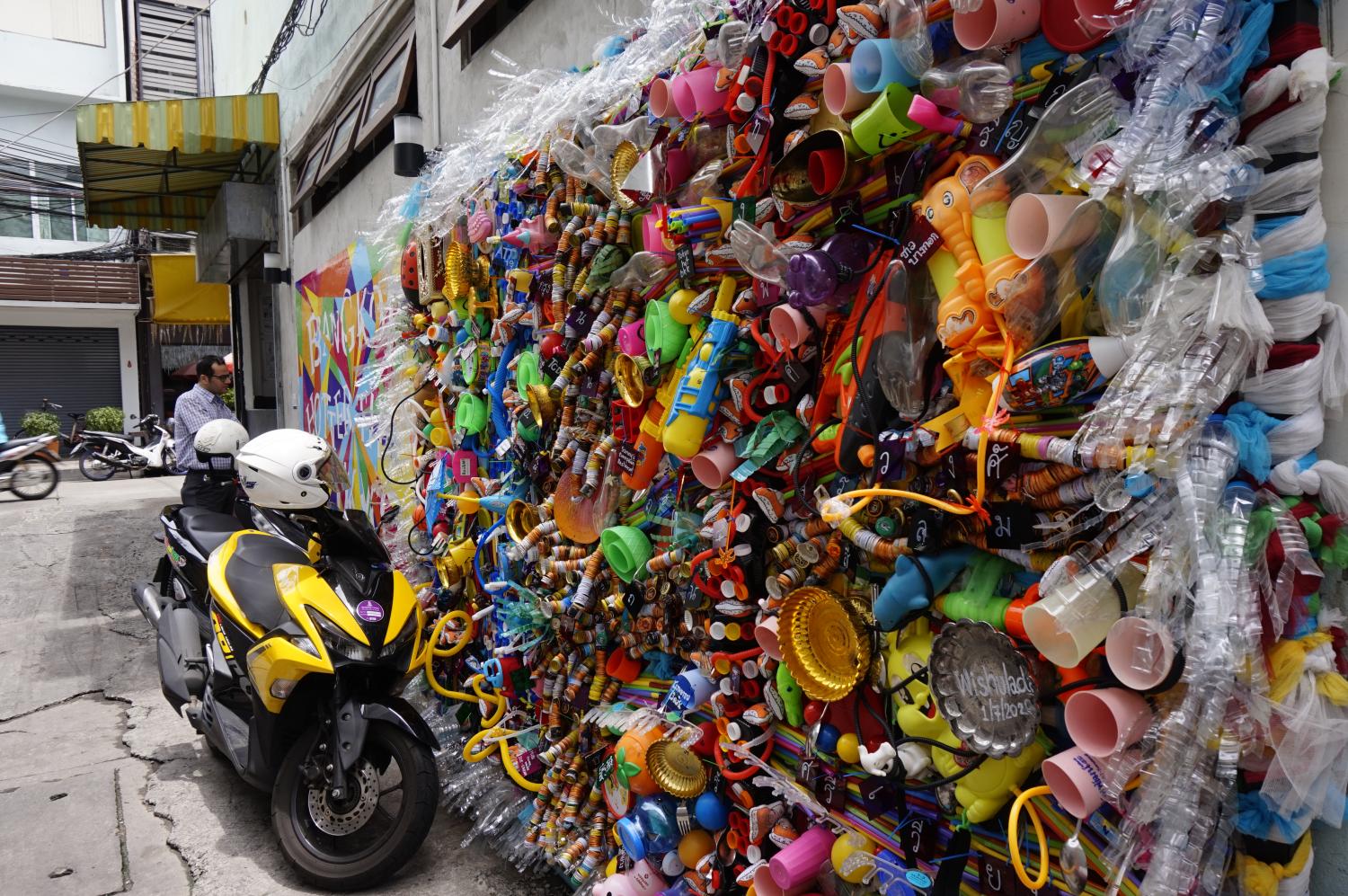 "Charoen Krung was the first road in the country, so people came to find trading opportunities. It is full of tourists and boasts a cultural diversity -- Indian, Chinese and Thai. This seemed like a utopia where people lived together and properly maintained their own identity. All nationalities have their own masks but the point is that we're all humans," said Wanus Choketaweesak, co-founder of Ease-Studio.

"Charoen Krung is also close to Sampheng and Phahurat markets, so I've used industrial tools to make handicrafts. My work is a blend of various techniques and materials from several industries such as screws, construction wire, cable ties, fabric and ropes to represent the divergence."

Meanwhile, young artist Nampeung Nokaew, aka Peungda, took over a wall on Charoen Krung 32 to evoke nostalgic moments through the vibrant digital painting 3:17 PM Sunray. Her work highlights Charoen Krung's diverse landscapes in which visitors can come across flowers amid a concrete jungle or a contrast of classic and modern architecture. 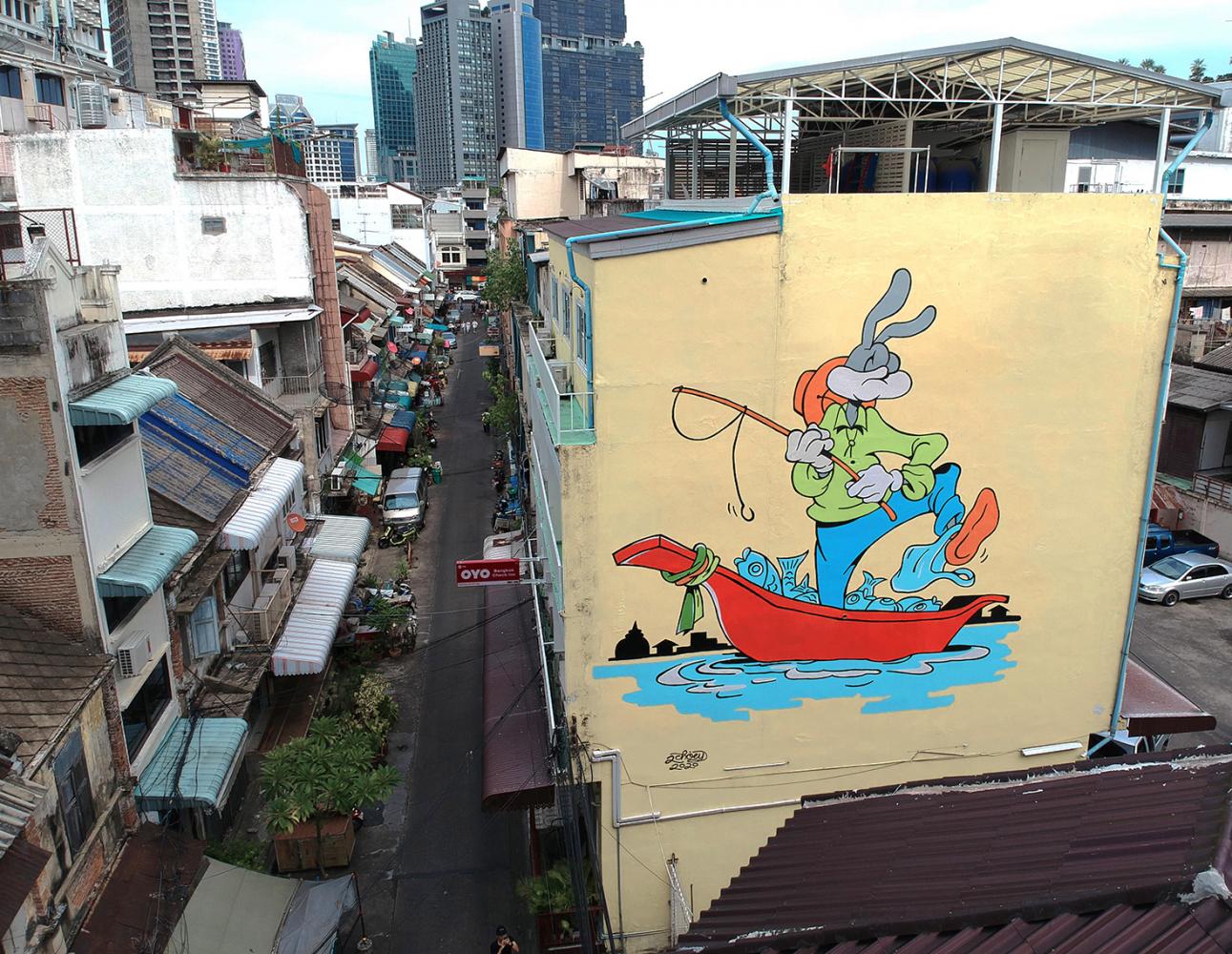 "The concept is about colour. I've applied an Indian-style drawing technique to refer to multiculturalism in Charoen Krung district, which is lined with mosques and churches. Personally, I often come and hang out around Charoen Krung district in late afternoon because I love sunshine in an orange shade. It evokes happy memories of when I studied in Chiang Mai," Nampeung said.

Tucked away on Charoen Krung 43, the Tokyo Hot cafe devotes its wall to the colourful mixed-media installation called Bird's Eye View. It is a masterpiece of the Wichulada Panthanuvong, a well-known artist, who has made efforts to promote the circular economy through art.

Playful and friendly with the environment, her work resembles a map that will help visitors navigate through Charoen Krung's iconic landmarks, popular restaurants, historical buildings and tourist attractions such as the famous porridge shop Jok Prince, The Peninsula Bangkok, Warehouse 30 creative art space and the Grand Postal Building.

"My work shows a bird's-eye view of Charoen Krung district. I've utilised a variety of recycled materials that can be found around the neighbourhood such as used M150 bottle caps and plastic bottles as well as some toys from my previous work. The idea was to bring Charoen Krung Road back to life," Wichulada said. 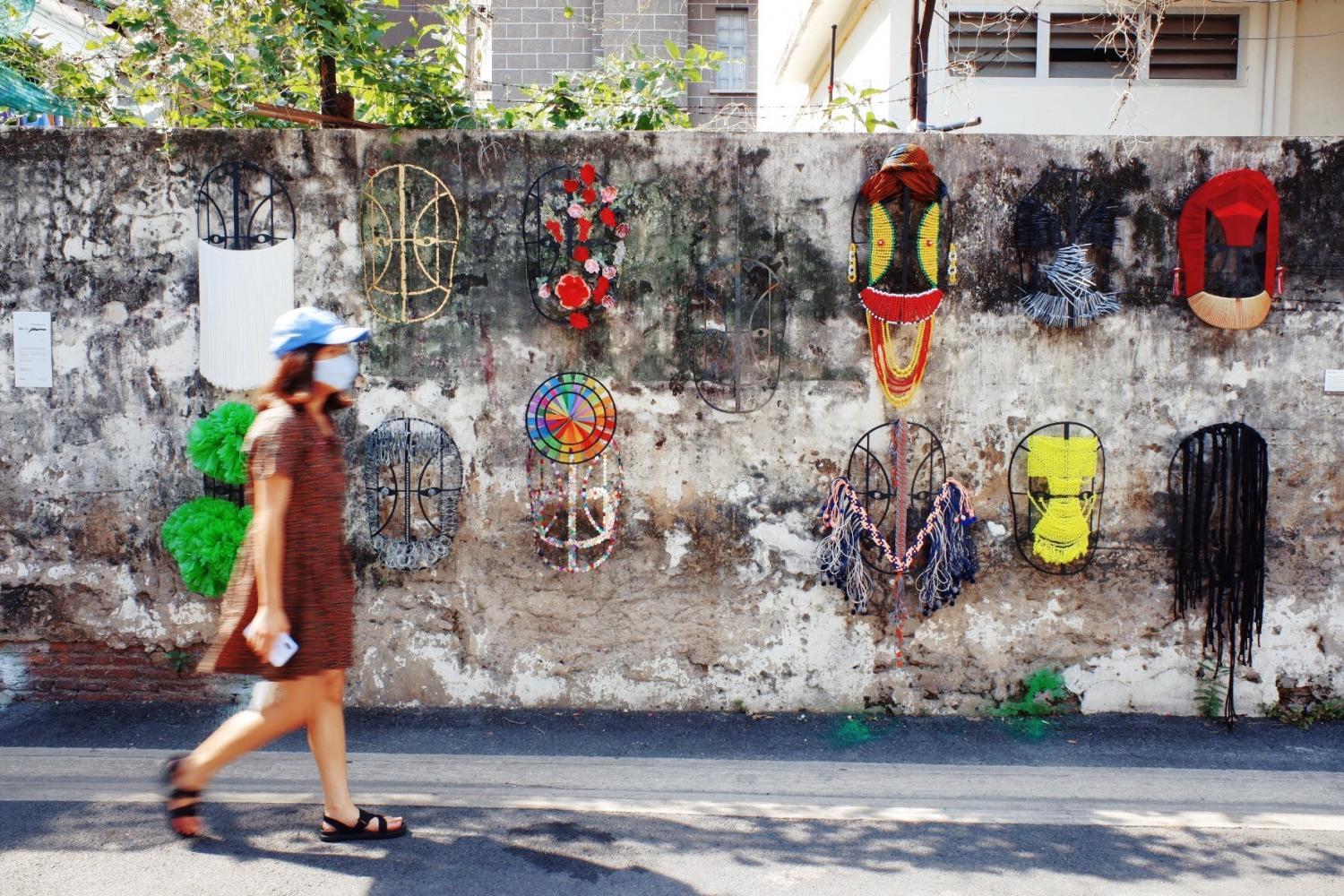 "At the same time, I applied the contents of the circular economy into my work to raise awareness about the environment among Thais. An artist might not be able to develop innovation but we can still change the world."

"The goose-like characters are influenced by the Urai Braised Goose Noodle and Rice shop's signature dish. It's about the bond of Thai-Chinese families in which parents and children live together. Like the Chao Phraya River, it links everyone in the community together," Sucha said.

Visitors can find out more details at Charoenkrung Creative District's Facebook page or check out the "Colour Of Charoenkrung" project's route at bit.ly/2Yb60uV. 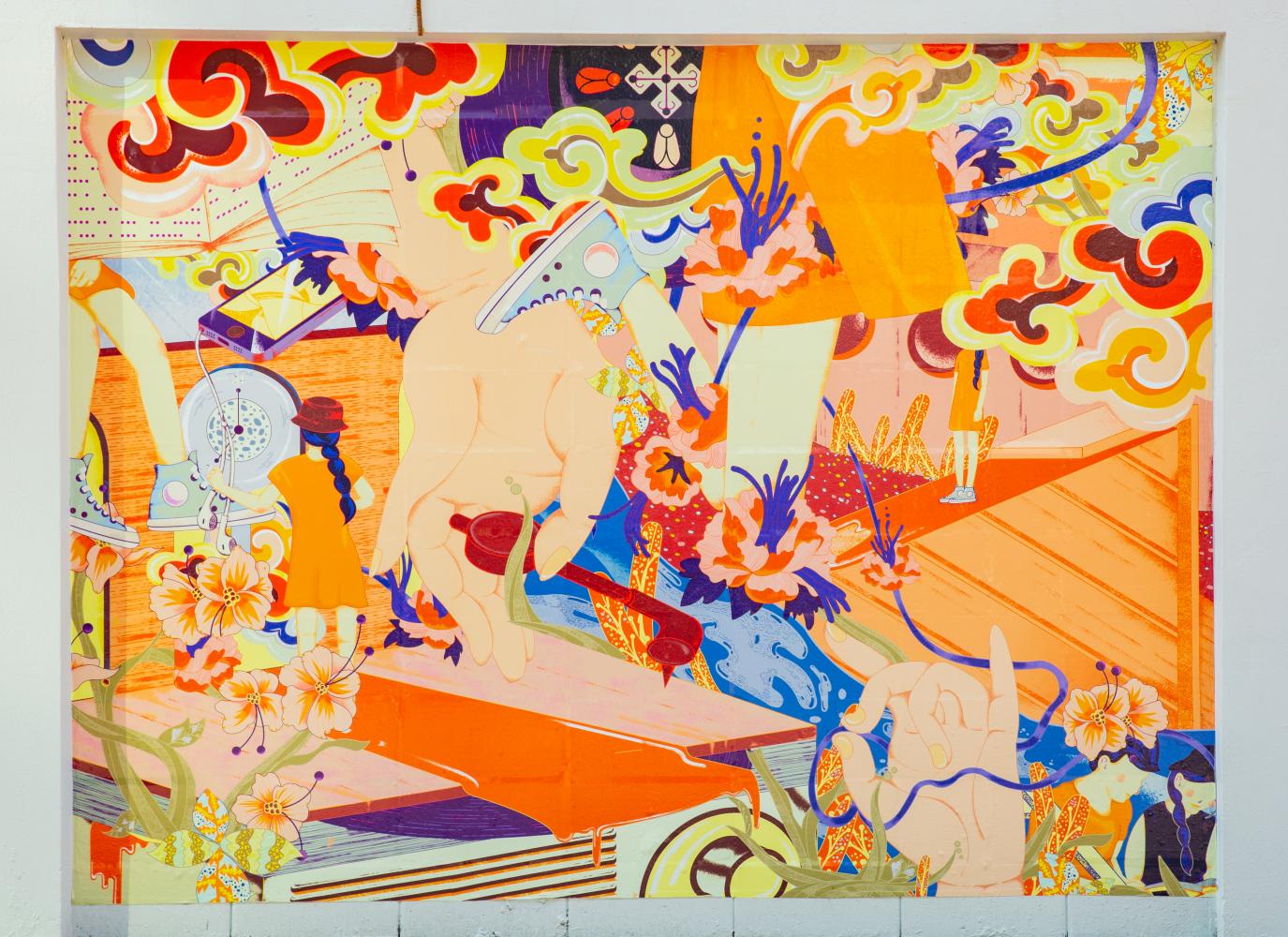 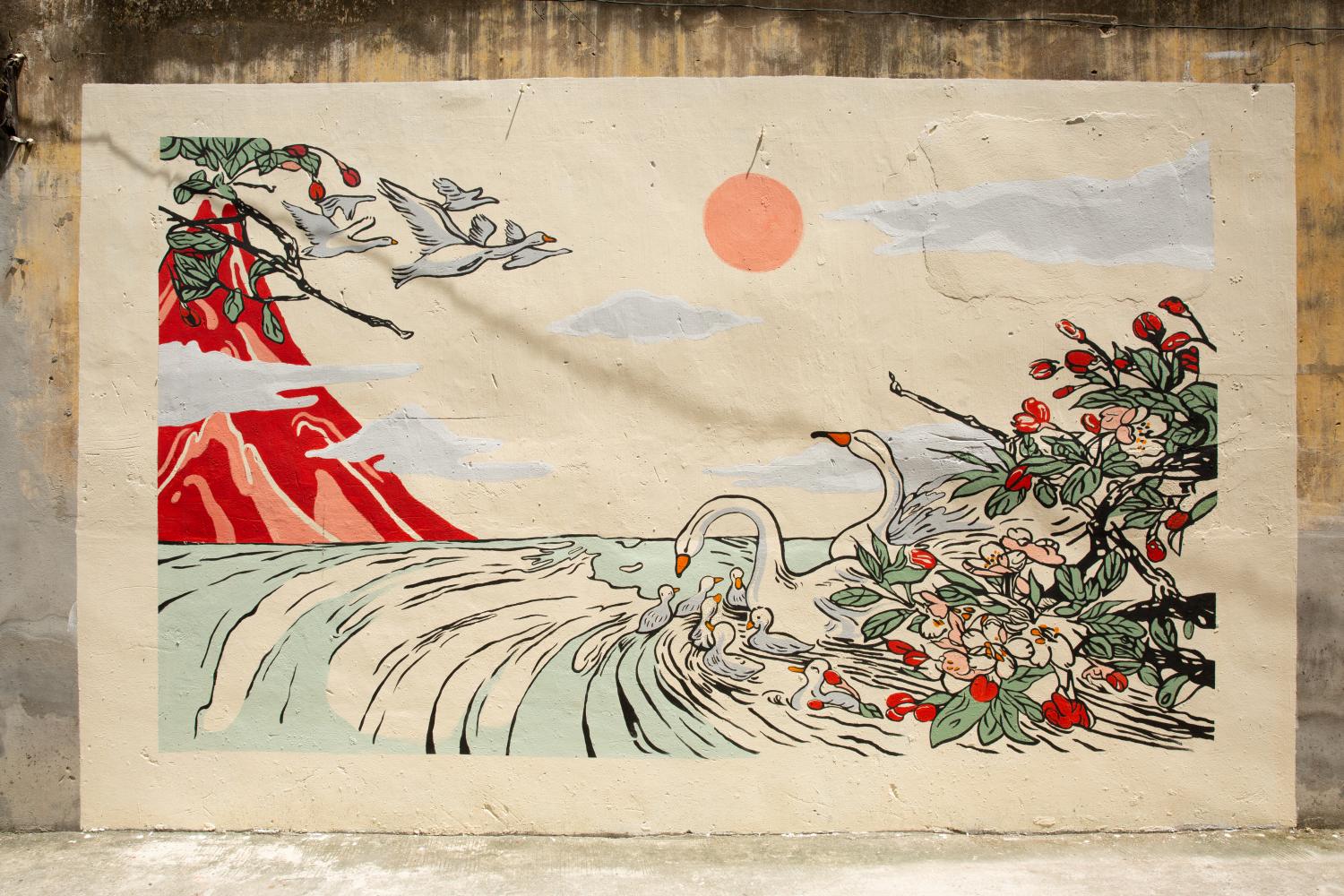