An intimate look at timeless masterpieces

S.A.C. Subhashok The Arts Centre is hosting Wonderscape, an exhibition featuring the works of five late Thai pioneers in their respective fields

It is a rare opportunity for art enthusiasts to view exquisite artworks from five departed Thai masters in one location.

However, that is exactly what is on view now at S.A.C. Subhashok The Arts Centre, as part of an exhibition titled "Wonderscape", which is showcasing the classical works of five late Thai pioneer artists -- Angkarn Kalayanapong, Chalood Nimsamer, Hem Vejakorn, Montien Boonma and Sawasdi Tantisuk. 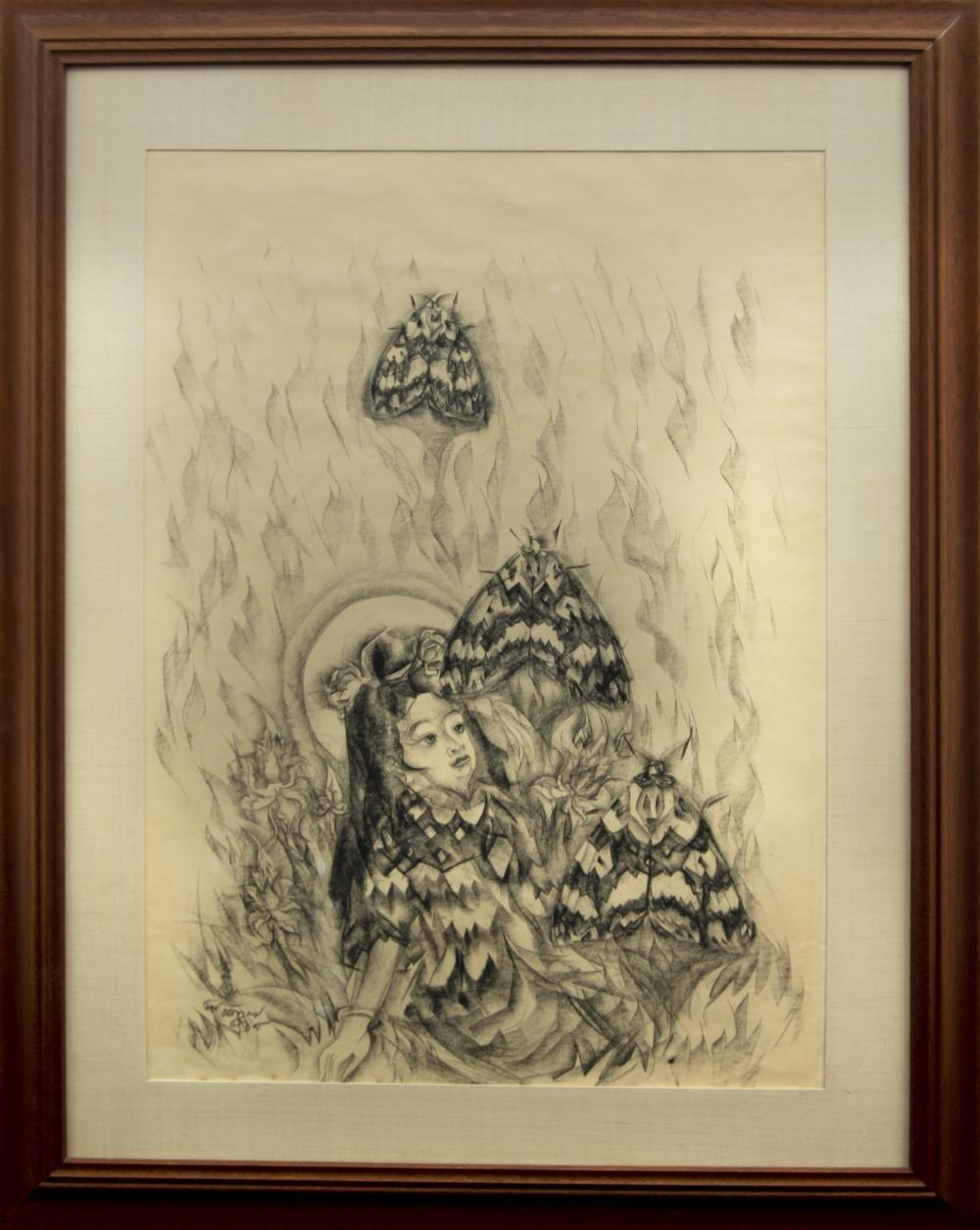 "These artworks were selected from collections by art collector Surapon Bunyapamai. It is a rare occasion for these unique artworks to be displayed together and it provides the general public with an opportunity to view master creations," said the curator at S.A.C. Subhashok The Arts Centre, Chol Janepraphaphan.

"The exhibition is called 'Wonderscape' because these masters created new landscapes in the art field. They pioneered movements and ways of thinking that have become the foundation for Thai contemporary art structure," Chol added.

Selected pieces in the Wonderscape collection are artworks on paper which some collectors have not paid much attention to in the past.

"Some young collectors think artwork on paper is fragile and more like sketches, instead of solid work. We chose to display the paper collection because we want Thais to value them like people in Western countries do. To preserve paper artwork, they must be stored in a room with ventilation. Don't hang artwork where the Sun can shine directly and don't store them in the bathroom or a kitchen where it is damp and there is a lot of moisture. Also, make sure to check for ants and termites in their storage place," Chol advised. 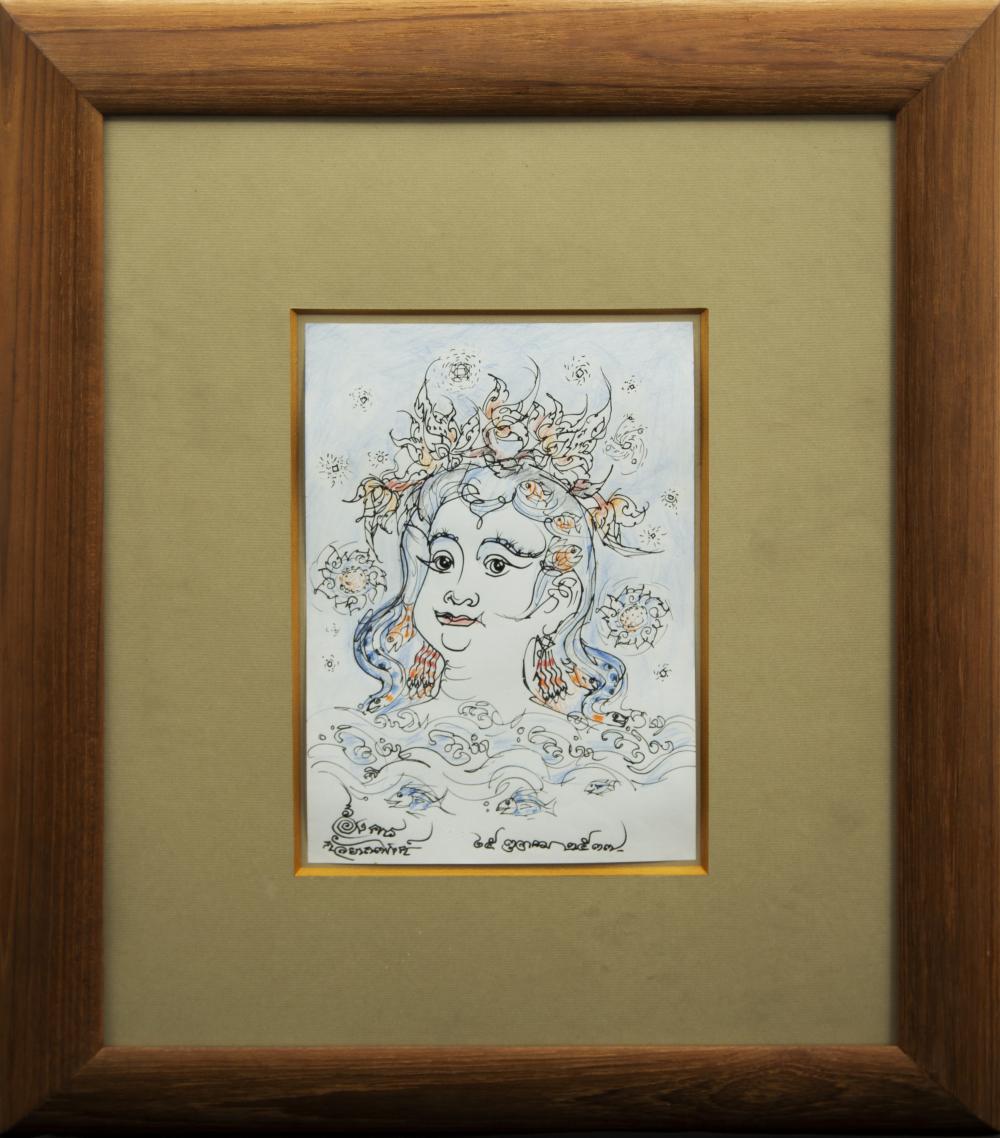 People might be more familiar with his poems rather than his artwork since Angkarn was the winner of the 1986 SEA Write Award for Panithan Kawee (The Poet's Pledge). He was also the 1989 National Artist of Thailand for literature. Moreover, Angkarn was also one of the few experts in traditional Thai mural paintings which he learned from the 1985 National Artist of Thailand, Fua Haripitak, before later going on to develop his own practice.

"Angkarn followed Fua to work on a traditional Thai mural painting project which focused on copying and documenting traditional mural paintings from the archaeological sites in Thailand. Angkarn told me about his experiences while working with Fua and how they had to sleep in old abandoned temples which was a risky affair. One time after they left a temple, the pagoda where they had slept just the previous night collapsed," said Chol.

Angkarn learned how to use different mediums for his painting from Fua including charcoal, tempera and gold leaf, but his charcoal painting skill is iconic.

"His charcoal techniques were praised because they were sharp, clean and accurate. At the exhibition, there is a painting in pastel colours, which is rare to find because he didn't create many paintings. Collectors also have an affinity with his handwritten poems because his writing style was unique," Chol said. 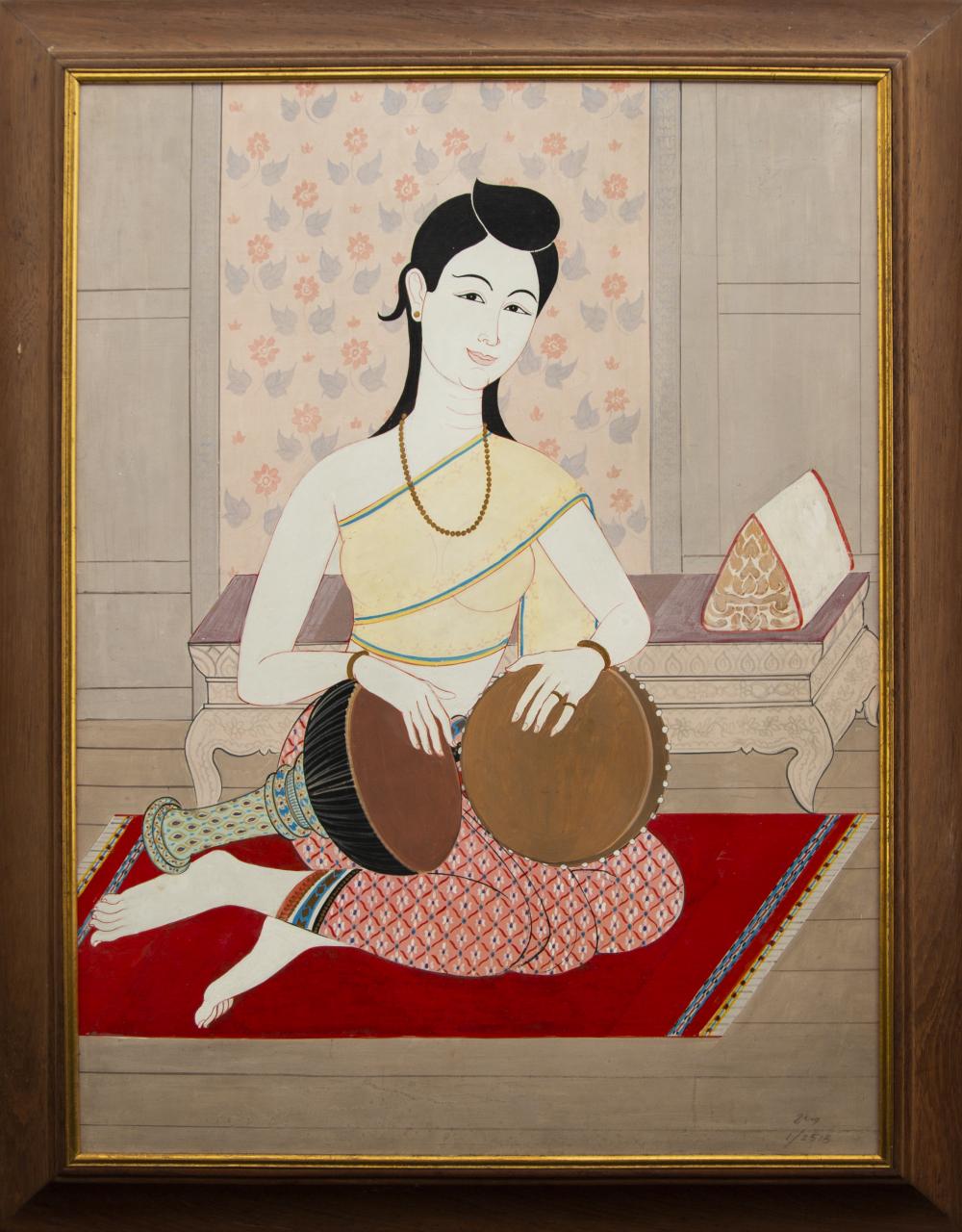 Chalood was the first student to graduate from the Faculty of Painting, Sculpture and Graphic Arts from Silpakorn University. Years later in 1955, he became an instructor at the very same university where he had studied. After some time, Chalood also went to study in Italy and France and with his extensive knowledge, he founded the Department of Printmaking and Thai Art in the Faculty of Painting, Sculpture and Graphic Arts at Silpakorn University. He also helped build a structure for art education through the books he wrote such as Art Composition and Art Approach In Traditional Thai Painting, the very first textbooks in Thai art education.

"It's interesting that Chalood used art theories from the Western world to examine Thai art. In the past, Thai paintings on temple walls displayed many characters in various scenes but Chalood deviated from that trend and drew one complete character in a frame. For example, after Chalood's mother passed away, he drew an imaginative character, Khun Nai Look In, who represented motherhood in order to be his spiritual anchor," Chol explained.

"Chalood's artworks stand out with simple elements and full body lines. Every single point, every brushstroke, and every single line was created meaningfully and depicted Thai culture beautifully," added Chol. 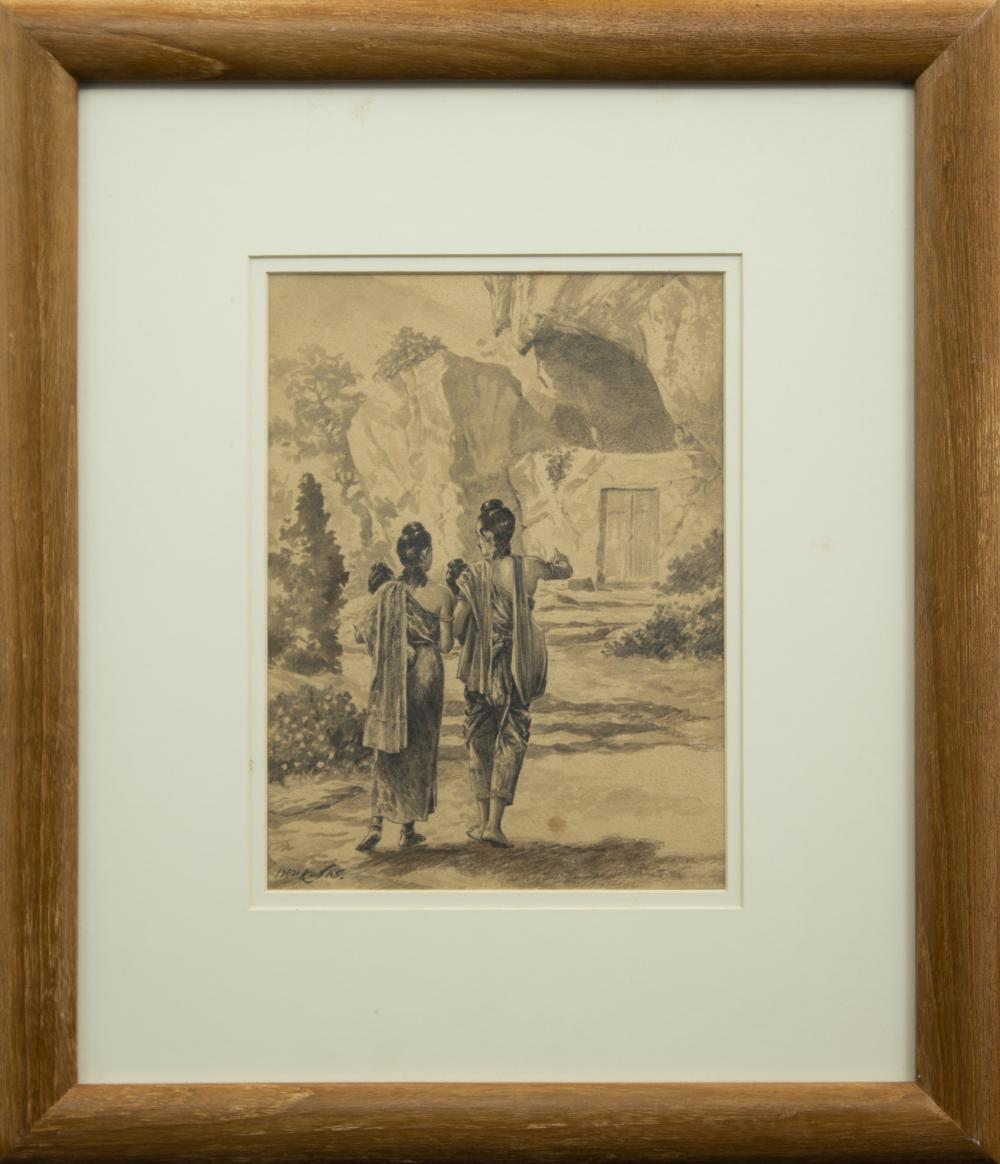 Pencil and watercolour illustration for the story of Phra Vejsandorn by Hem Vejakorn (circa 1940-1942).

Hem learned how to draw and paint by himself until Carlo Rigoli -- a famous Italian painter who was commissioned to design and decorate the ceiling of The Ananta Samakhom Throne Hall during the reign of King Rama VI -- saw his work and was impressed with his talent. Hem learned many techniques from Rigoli and therefore his works have some Italian art influence.

"Hem's artwork has influences from academic art from Italy. His paintings depict accurate figures of humans. At that time, characters in Thai paintings were flat but Hem drew characters with anatomical accuracy. Unlike Thai art, his works included light, shadow and perspective with details. Drawing academic art requires a lot of knowledge and skill. Students at Silpakorn University must learn this extensively before they can draw like the master Hem," explained Chol.

Hem was also recognised for his illustrations in novels, especially ghost stories.

"Art collectors have a lot of interest in Hem's illustrations because they became models for the next-generation of illustrators since they look realistic with light, shadow and movement. Many illustrators who draw for local stories, folklore and movie posters have been influenced by Hem," said Chol.

Montien graduated from the Faculty of Painting, Sculpture and Graphic Arts from Silpakorn University and was granted a scholarship to study art in Paris. Montien pioneered artwork that combined mixed media, installation art and conceptual art.

"People in the art industry have praised Montien as the Father of Contemporary Thai Art and he was accepted among the Southeast Asian art industry as well. His works were avant-garde and based on the principle of architecture, engineering and a form of mixing traditional Thai and Western art. Montien had interesting interpretations of Thai art because he not only used Thai patterns such as kanok but also easy-to-find materials such as herbs, chicken coops, branches and rice seeds in his works," Chol explained.

With his innovative ideas, Montien's art creations are still modern and trendy.

"Visitors can walk through and listen to sounds inside some installations designed by Montien. His works were so innovative. During his time, many of his artworks touched upon issues such as globalisation. Contemporary art content should cover broad and important issues and they can be about current politics or society. Montien's artworks were solid. Since his passing 20 years ago, mixed media in Thailand hasn't made any further advancement," said Chol. 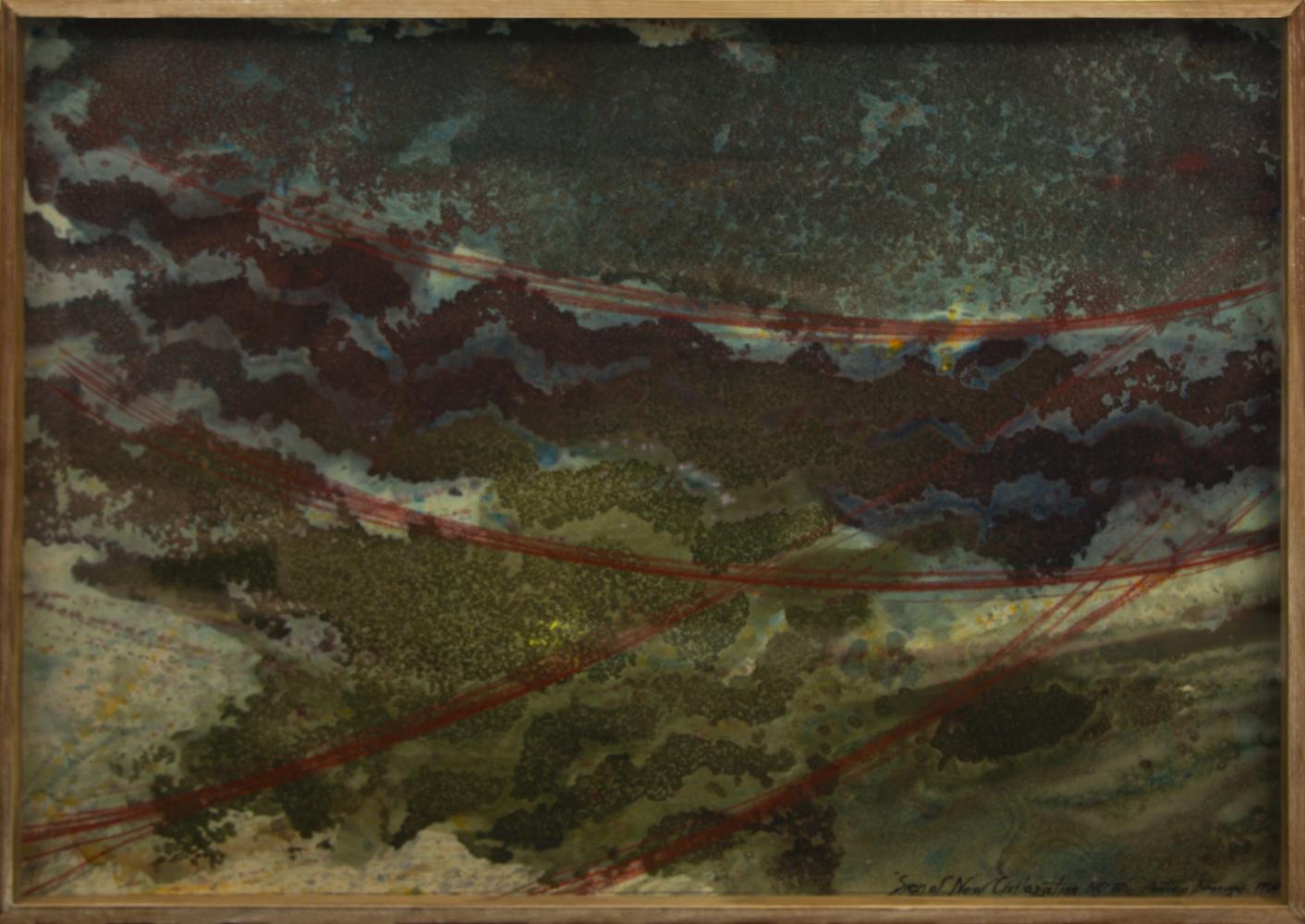 Sign Of New Civilization No.3 was created by Montien Boonma using mixed techniques.

Declared a National Artist of Thailand in visual arts (painting) in 1985, Sawasdi was a pioneer of the abstract painting movement and is celebrated for his iconic watercolour painting technique. His best works were paintings of landscapes and architecture which were created while travelling in Italy where he was granted a scholarship to study art.

"After Sawasdi and many Thai artists went to study in Italy and returned to Thailand, they created artworks which contained Thai elements. They wanted to get in touch with their Thai heritage and created art which reflects their Thai roots. At one period in time, watercolour paintings were not considered real artwork since it was used to study light and shadow. However, Sawasdi went beyond that. His works showed solid, accurate and swiftly drawn lines without any pencil sketch," explained Chol.

"I really have to mention another watercolour painting master, Aree Suthiphan, who is like a competitor of Sawasdi. However, Aree's paintings have been influenced by America, where he received his Master's degree. They both had their own techniques and styles but many times, their paintings were drawn using the same locations such as floating markets and temples. At 'Wonderscape', visitors can see Sawasdi's painting of Wat Pho or the Temple of the Reclining Buddha which was difficult to paint because of the complex lines. The exhibition is worth seeing even if you come to only see lines or colours which you can't normally find in this era," concluded Chol.

"Wonderscape" runs at Subhashok The Arts Centre, Sukhumvit 39, until Sept 27. Admission is free. Visit facebook.com/sacbangkok or call 02-662-0299 for more information. 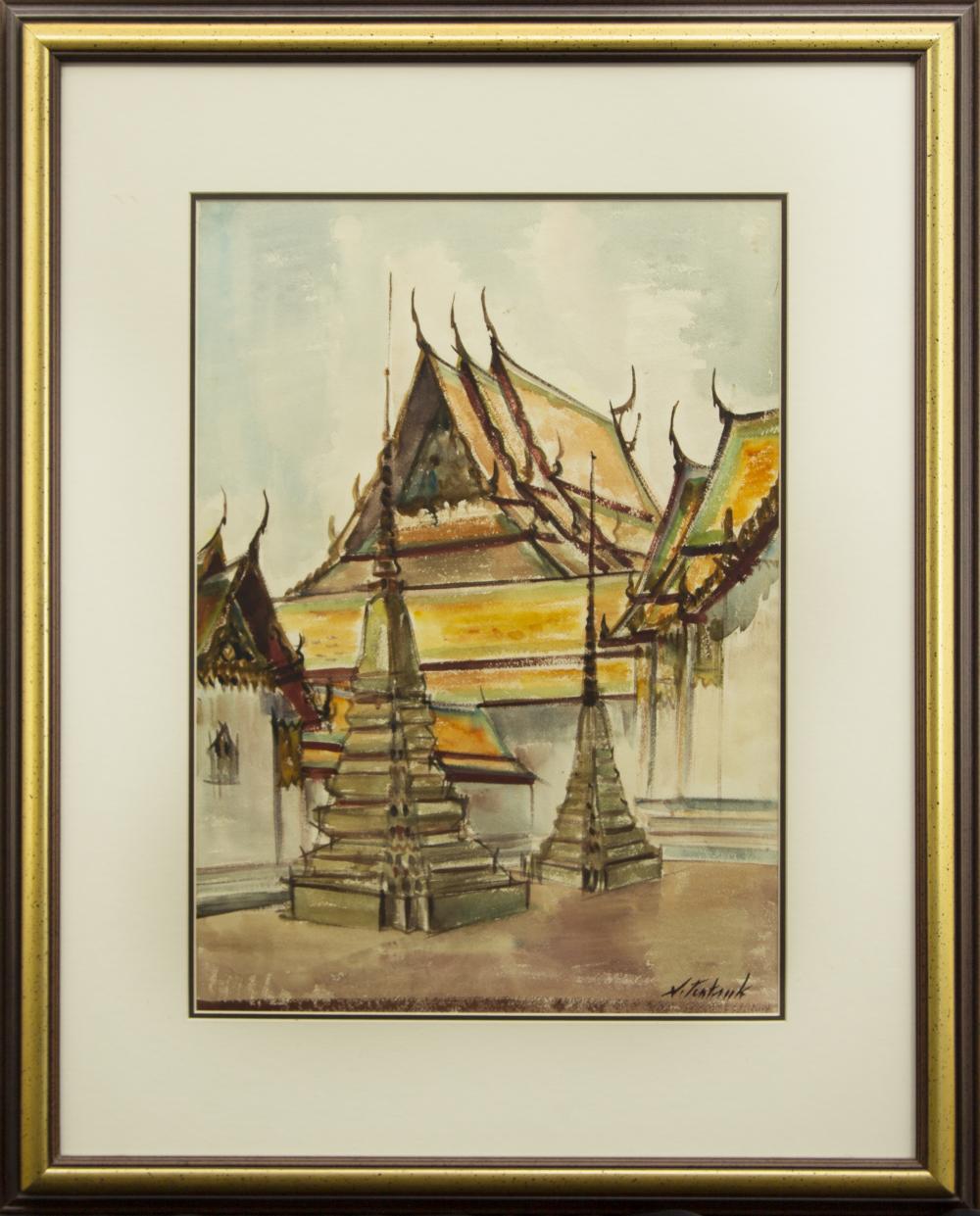 Watercolour painting on paper by Sawasdi Tantisuk (circa 1989). 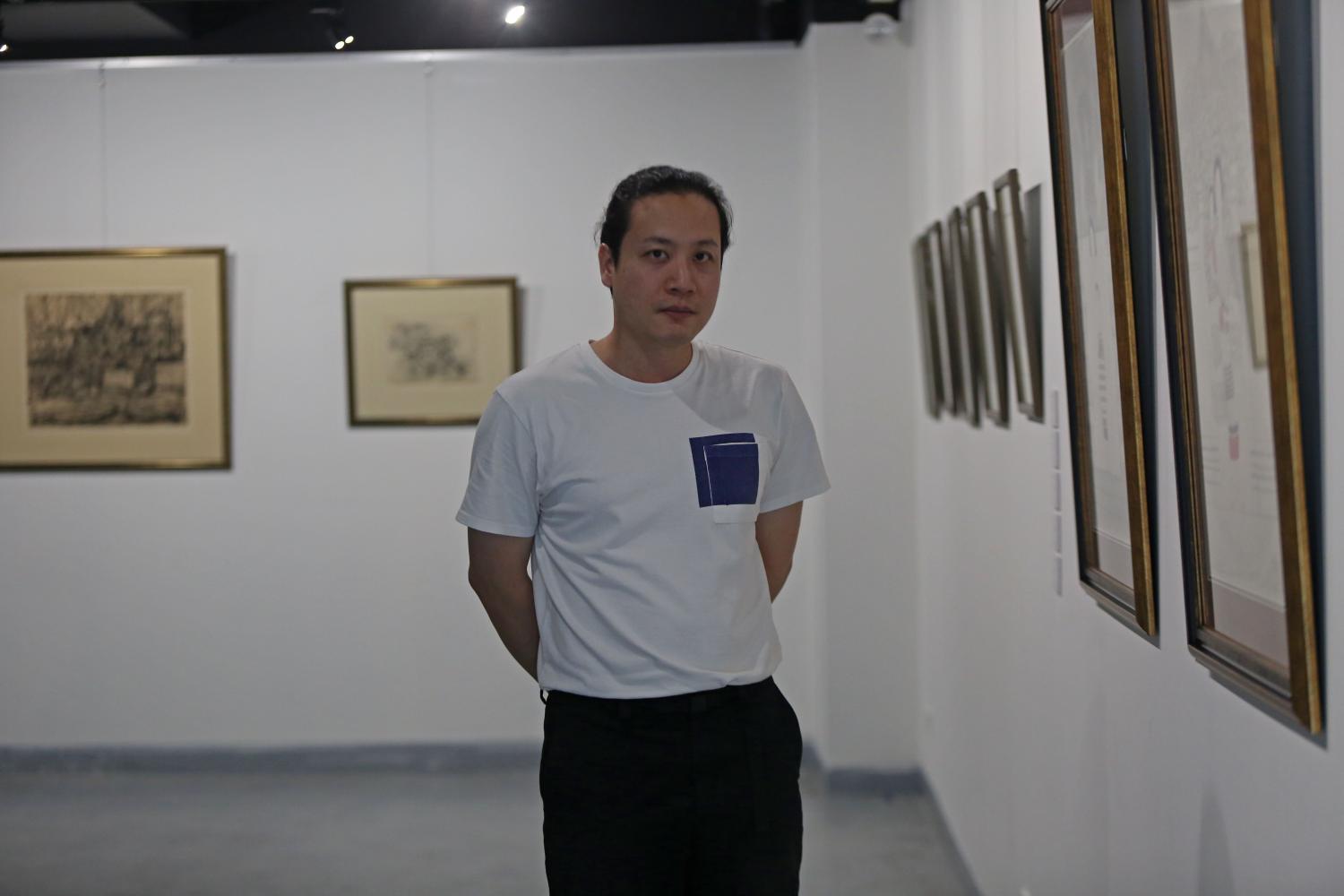