Female pioneers of cinema in focus

When cinematography was invented in 1895, the new machine was used to capture images to present reality as it was (women leaving a factory, a train approaching a station, family gatherings, etc). It was Guy who believed that the camera could also be used to tell a fictional story instead of just being a recording device of things taking place in real life. In 1896, Guy suggested to Léon Gaumont, the owner of Gaumont Film Company, that he abandon simple shots to shoot small scripted stories -- fiction films. She got the authorisation directly, an exceptional feat back then and still is today.

Until 1907, she reigned over Gaumont's production as a director, artistic director and screenwriter, and experimented with special effects and the possibility of visual representation.

At the 24th Thai Short Film and Video Festival, 13 short films made by Alice Guy between 1897 to 1906 will be screened in a programme titled "Women Film Pioneers". The selection features silent films in which Guy experimented with the potential of the camera for recording as well as manipulating reality. Whimsical and bold, amusing and revolutionary, these short films represented the vision of the world's first female filmmaker who is considered as one of the true pioneers in the art of films (the programme is supported by the French Embassy in Thailand and Institut Francaise).

Most of the 13 short films in the programme run for one, two or a maximum of 11 minutes, however, they all present Guy's astounding vision of what cinema could do, even in its early, somewhat primitive, days. For instance, viewers will see Chez Le Magnétiseur play with editing while there is also a six-minute film inspired by Les Miserables. Most importantly, audiences will see how Guy from the very beginning used cinema to explore the role of women in society. The seven-minute Les Résultats Du Féminisme (The Consequences Of Feminism) toys with the idea of switching genders and what could come after it.

The concept of feminism is also explored by another female filmmaker in the same programme with La Souriante Madame Beudet (The Smiling Madame Beudet) which is a 42-minute surreal film from 1923 directed by Germaine Dulac. The film is steeped in the impressionist/avant-garde school of the 1920s and more importantly is considered by some as "the first feminist film" which tells the story of an intelligent woman trapped in a loveless marriage.

At the turn of the 20th century, Dulac ran a feminist magazine in Paris. Soon, she took a deep interest in films and became a film theorist who studied the unique creative capability of cinema as independent from old media such as written text and paintings. Her films, along with those of Alice Guy's, show the contributions of female filmmakers in the evolution of narrative cinema in the first decades of the 20th century.

"Women Film Pioneers" will be held on Dec 22 at 3pm and Dec 26 at 5pm at the Thai Film Archive. Free admission. See details and reserve your seat at fapot.or.th. 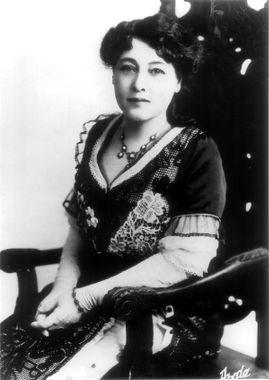