Internationally-acclaimed Thai contemporary artist Pinaree Sanpitak, who is known for her "breast stupa" artwork, found inspiration when she first started breastfeeding 27 years ago.

"I was looking for a symbol which differentiated between men and women," she said.

"However, I want to emphasise that breast stupa is more about womanhood than motherhood. In fact, breast stupa has developed alongside me, like a self-portrait. The inspiration behind using this symbol has been my personal life which I share with through artwork. Since 2001, I have designed installations that are interactive and explore sensorial perception, which allows visitors to interpret my work based on their background." 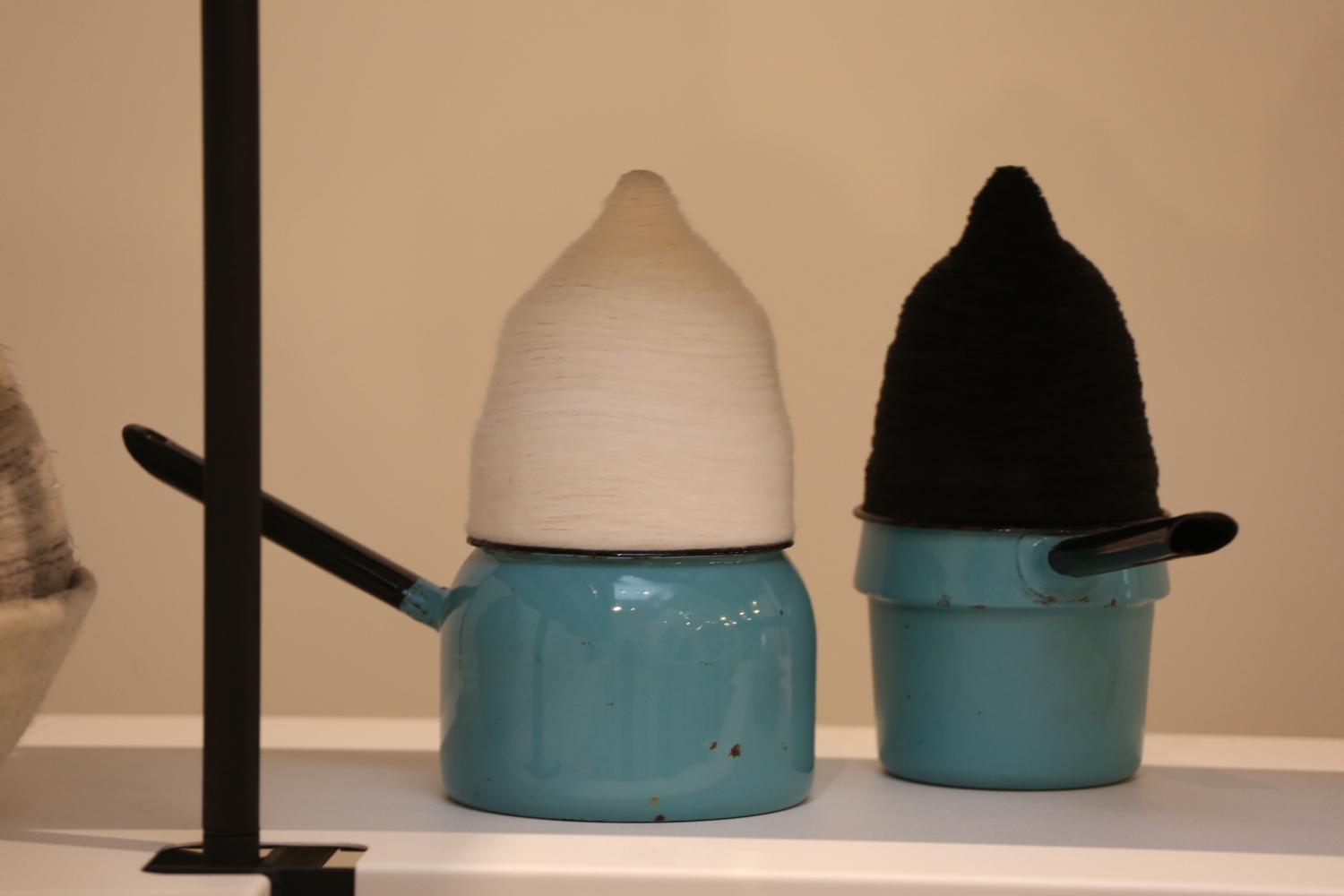 Below Two sculptures created from a double boiler made in the US in the 1950s.

On view now at 100 Tonson Gallery, her latest exhibition titled "House Calls" displays works created in the form of breast stupa using hand-torn stacks of natural paper from Japan, Korea, Laos, Vietnam and Thailand. These stacks are placed on top of various vessels, containers and utensils, which create new narratives of the sacred and the sensual. Some of the containers are decades old such as a double boiler made in the US in the 1950s, a vase from her parents, and a bamboo basket which some young people might not recognise.

"The vessels, containers and utensils come from my parents, grandparents and my own personal collection and they are topped with natural paper. Each sculpture is displayed on a shelf to allow visitors to get a 360-degree view. Moreover, the shelves were designed to react to motion and since the stacks of paper on top of the containers were stuck to a core made of a long pin, the sculptures vibrate when viewers move. 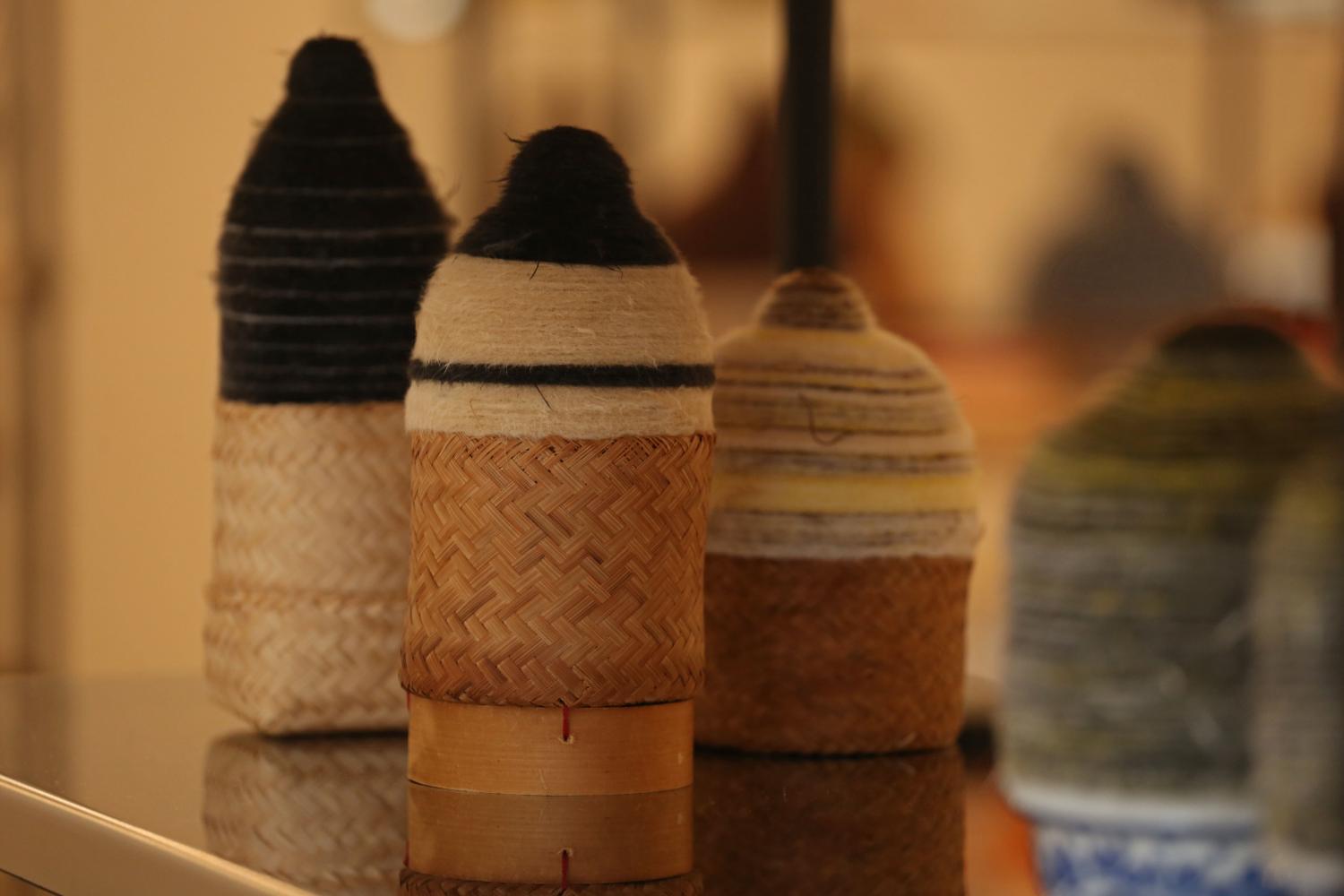 Below left At the exhibition, vessels, household utensils, kitchenware and tableware were sourced from the artist's parents and grandparents as well as her own collection.

The exhibition aims to encourage people to reflect on their own home, which can be either tangible or intangible in meaning. Meanwhile, the vibrations of shelves and containers symbolise an insecure life since not every house is safe. Furthermore, based on our personal experiences, there are stories and emotions connected to the containers that may be unique to each visitor," explained the artist.

Pinaree's breast stupas often involve a motif of female breasts and resemble architecture dedicated to Buddhism. For almost 30 years, she has presented breast stupas in various art forms including painting, printmaking, sculpture and art installation through several materials such as paper, textiles, glass, ceramics and metal. 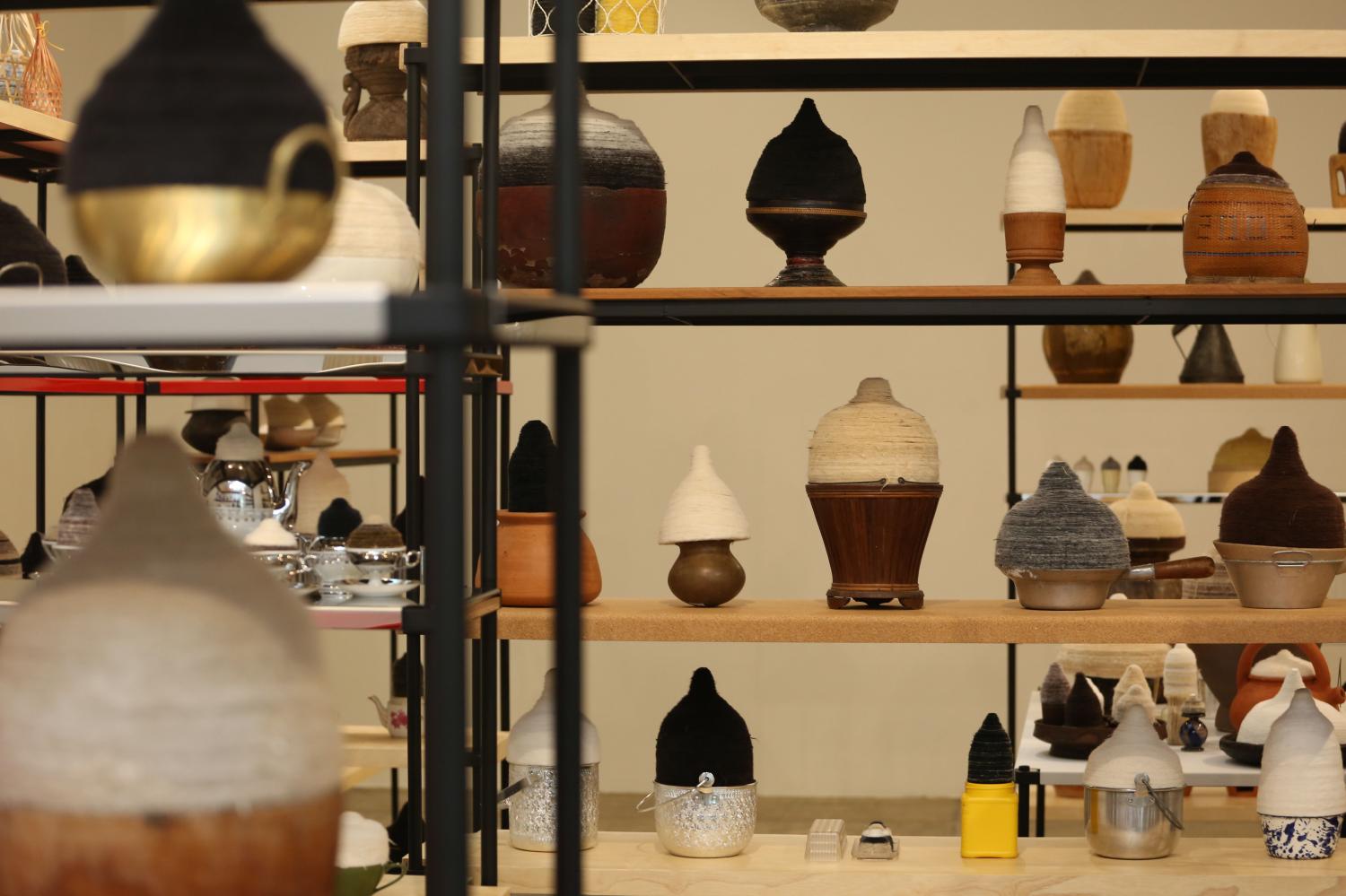 Almost 400 sculptures that vibrate in response to movement by visitors are displayed on shelves.

According to Pinaree, the idea for "House Calls" came from her work at the 2019 Setouchi Triennale, in Honjima, Japan, where she created eight sculptures resembling shrubs.

"The eight sculptures were placed in a tokonoma, a place to display artistic ideas such as floral arrangements or paintings of traditional Japanese homes. The sculptures were created to pay homage to Shiwaku carpenters who did not have descendants to carry on their traditional craft. After returning to Bangkok, I developed the idea from those sculptures and since I like vessels, containers and utensils, I used them to create breast stupa sculptures. To make sure there was variety, I searched for containers of various shapes, forms and colours. At first, I wanted to showcase sculptures on the floor but visitors probably would not be able to view differences clearly, so I decided to put them on shelves. One of my eight sculptures from Japan is also on display here." 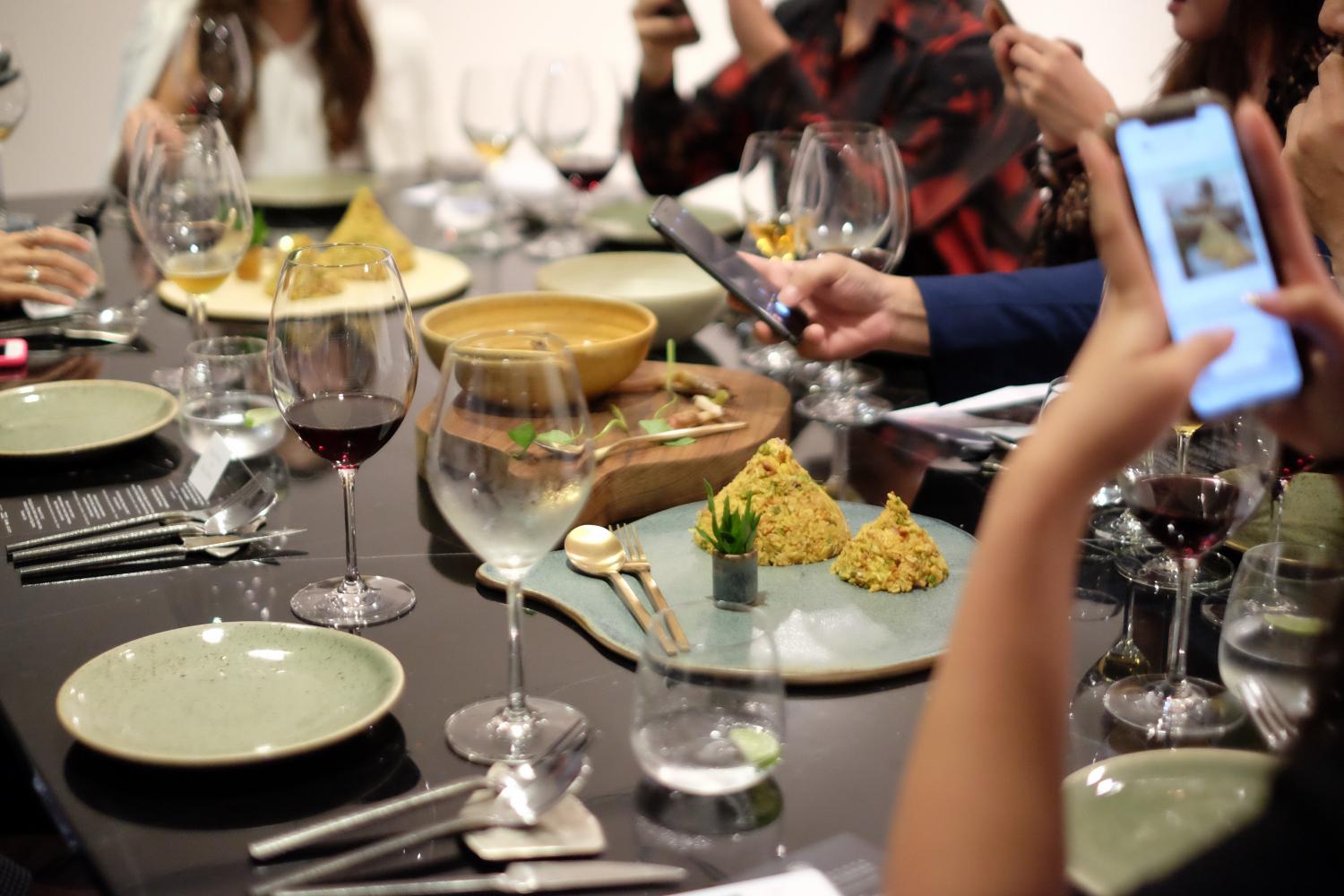 Some of the dishes at 'Breast Stupa Cookery: The World Turns Upside Down' at Nova Contemporary Gallery last November. NOVA CONTEMPORARY gallery

Besides art exhibitions, Pinaree has also incorporated her interest in cooking in an event known as "Breast Stupa Cookery", which has been running since 2005. In the beginning, the artist created ceramic cake moulds in the shape of breasts and later worked with several chefs who created menus and food containers inspired by the shape of a breast. Two recent events, "Breast Stupa Cookery: The World Turns Upside Down" and "Breast Stupa Cookery Café" were organised last November at Nova Contemporary Gallery by the artist. The highlights of the fine-dining experience included southern curry with smoked brisket served with turmeric rice salad; steamed curry crab eggs; and crab nam prik paw. Meanwhile, at the café, patisseries, cookies, ice cream and cakes were also served.

"Chefs are also artists and I learn from them. While some chefs have interpreted the motif of a breast stupa as figurative art, others design their menu in abstract form. 'Breast Stupa Cookery' at Nova Contemporary was the first time this cookery concept came to a food truck and it was fun. Seven courses were created by several chefs for a fine-dining experience. Food is an excellent medium and it led me to make new connections and visitors can also easily interact with these creations," she said. 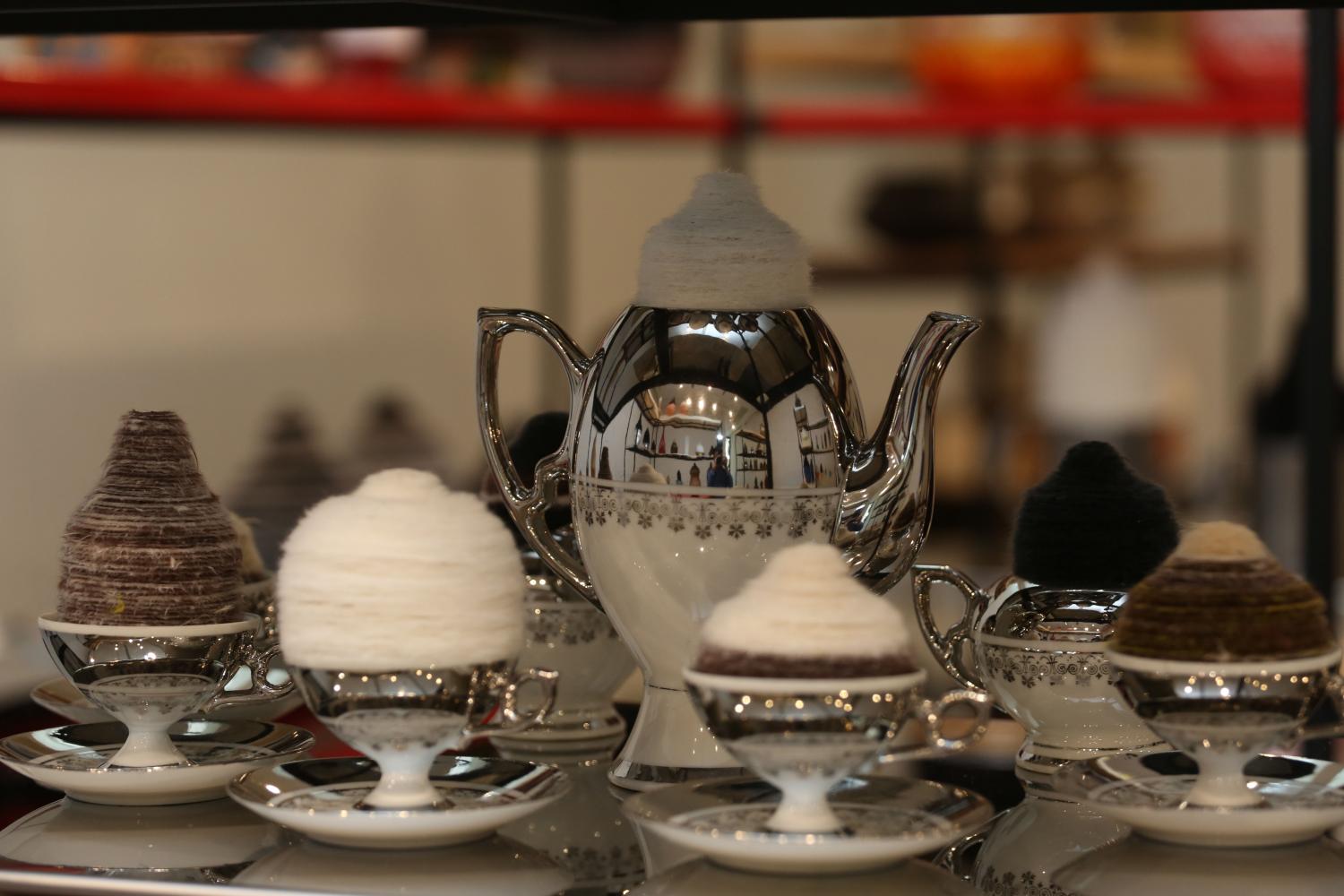 Some of Pinaree's other interactive exhibitions include "Noon-Nom" (2001-2002) and "Anything Can Break" (2018). "Noon-Nom" was a collection of soft breast stupa sculptures made of synthetic fibres covered in organza that visitors could touch, sit or sleep on. Meanwhile, "Anything Can Break" (2018) was an art installation featuring optic fibre, motion sensors and handmade glass. Visitors did not know the placement of 10 sensors and sound effects would trigger when a people walked past them. Even though Pinaree is dedicated to her work, she does not have any expectations from her audience.

"I do not have any expectations from visitors because after I create, the reactions of others are beyond my control. When 'Anything Can Break' was exhibited at the Toledo Museum of Art in the US, a ballet company in the area really liked the idea of having the installation on a ceiling and wanted to choreograph a dance performance under it. It was unexpected and although I am excited when visitors interact with my work, I cannot predict how they will react to each individual piece," said Pinaree.