Outside The Wire joins the assembly line of mediocre Netflix films

A dystopian near future warzone, robots and AI, Russian terrorists, action-packed firefights with tons of bullets and explosions. The story of a drone pilot who has to team up with an android officer in a top secret mission in order to save the world from a nuclear attack. Judging by its premise, the latest futuristic war film Outside The Wire seems to have all the ingredients good sci-fi action movies should have. And while it's setting the scene for what we can expect, that's not always necessarily a good thing as Outside The Wire feels like a middling effort with an ineffective gimmick and undercooked script.

By now many of us should be well familiar with the quality of Netflix original content. Especially when it comes to their action movies, the quality of the streaming service's output has been inconsistent. While last year alone we might have got some promisingly good action films like Project Power and The Old Guard, there were also quite a few underappreciated and forgettable ones, like Extraction, 6 Underground, The Last Day Of American Crime, Coffee And Kareem among others. So it seems like the bar has been set with regard to action movies on the service.

Written by Rob Yescombe and directed by Mikael Håfström, Outside The Wire is set in the year 2036. American peacekeeping troops are augmented by robot combatants (called Gumps), and most aircraft are operated by drone pilots, monitoring from thousands of kilometres away. But after headstrong drone pilot Lieutenant Harp (Damson Idris) disobeys a direct order, the army deploys him to a deadly militarised zone to confront the human cost of his button pushing. At the new military outpost, Harp finds himself working for Captain Leo (Anthony Mackie), an android commanding officer tasked to track down Victor Koval (Pilou Asbæk), a Russian terrorist warlord who intends to launch a network of doomsday devices. Harp learns that his theoretical experience as a drone pilot means very little on a real battlefield under enemy attack. On the ground level, Harp becomes a rookie and has to learn everything from super soldier Leo, a veteran who knows the terrain better. 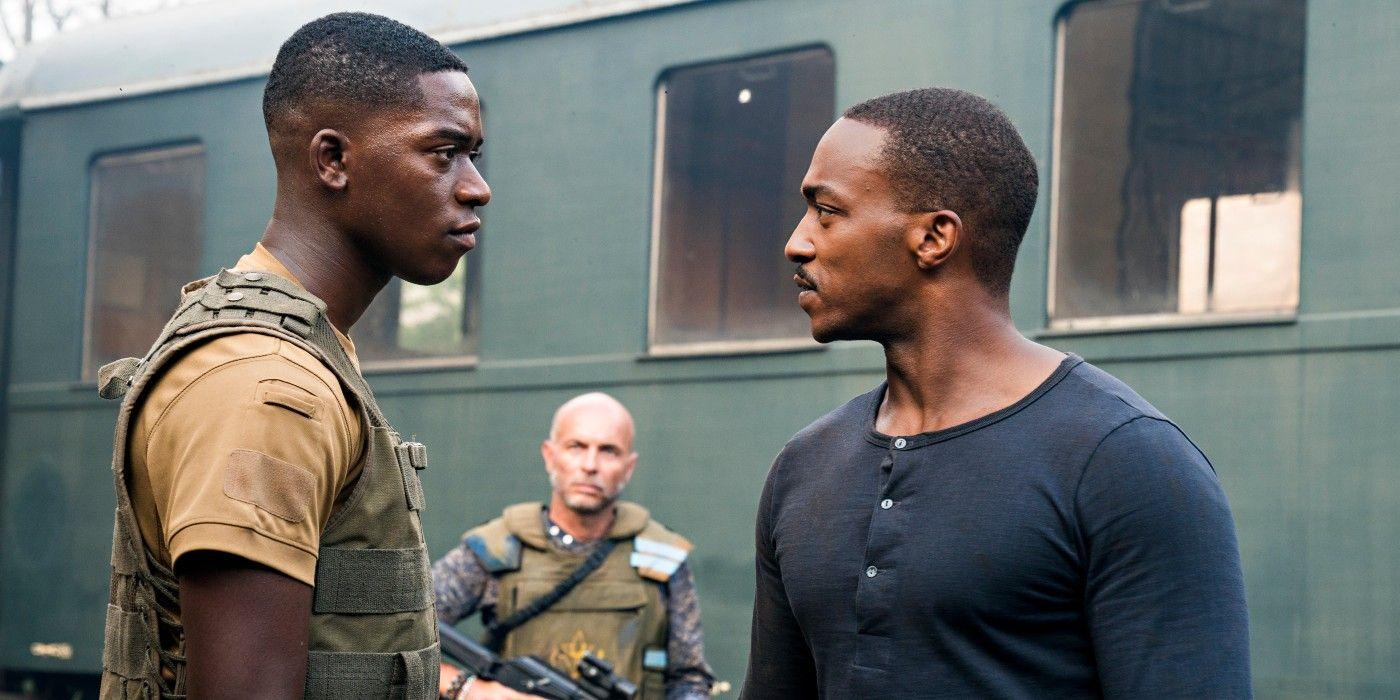 Damson Idris and Anthony Mackie in Outside The Wire. (Photos © NETFLIX)

Outside The Wire at its best reminded me of Training Day meets the Terminator. So if those films are your favourites, and you want to see what it would look like with AI, robots and drone technology, then you might find this film interesting. And while it almost sounds like Outside The Wire could be a buddy cop movie, unfortunately, we get almost no development in either of these two lead characters. In fact, we actually have no development in any of the characters in this movie for that matter. Despite the film being carried on the shoulders of Mackie's character Leo throughout its story, I thought that Mackie was not necessarily the lead. The most important character is actually Damson Idris, but he doesn't deliver well enough as Harp. His character is supposed to be a hotshot arrogant drone pilot, and I get his purpose. But I thought the execution and straight up performance was mediocre. It's unfortunate because his character is supposed to be the audience's way into this world, but you won't be rooting for him.

Along the way, we are introduced to a few throwaway characters and then the story just moves on. An engaging film should have characters that impact the story that ultimately makes us sympathise with their cause or make us root against them. But here they don't do either, and that makes many of the interactions seem random. The action sequences in this movie are also generic with poor execution. The camera doesn't know where to focus most of the time, and the use of special effects is amateur and cheap. The pacing is inconsistent and ultimately makes the movie feel longer than it is. So, if you're looking for a decent sci-fi action film with engaging storytelling, I'd suggest you skip Outside The Wire. But if you're looking for some gunfights and explosions with a futuristic setting, this might be an OK watch to pass the time. Ultimately, Outside The Wire will join the ranks of many Netflix assembly line action movies that come and go.

Frame up, or truth exposed?