Painting for the love of home
Life
Arts & Entertainment

Painting for the love of home

Experiences can play a profound role in how we navigate the direction of our life.

For 27-year-old artist Chayapong Charuvastr, it helped him develop a platform on which he explored his state of mind and the "feelings at home". He explores this theme in his latest exhibition titled "Without Leaving Home", which is running at La Lanta Art Gallery until June 1 and is also available for viewing online.

Much of Chayapong's creative skills were developed during his decade-long stay in the US. His affinity with buildings from the mid-century offer audiences a glimpse into the old soul of this promising artist.

Through a series of eight captivating paintings, the Thai talent depicts the facade of mid-century architecture and draws parallels between the stillness of artwork to what he regards as human peace of mind.

Using Bangkok as his visual library, the New York-educated painter rediscovers architectural gems from the 1950s and 1960s, which can often still be spotted across Bangkok's sprawling landscapes. He discovered these places, which he describes as neglected architectural gems, during various moments in life and they often left an intense effect on him. 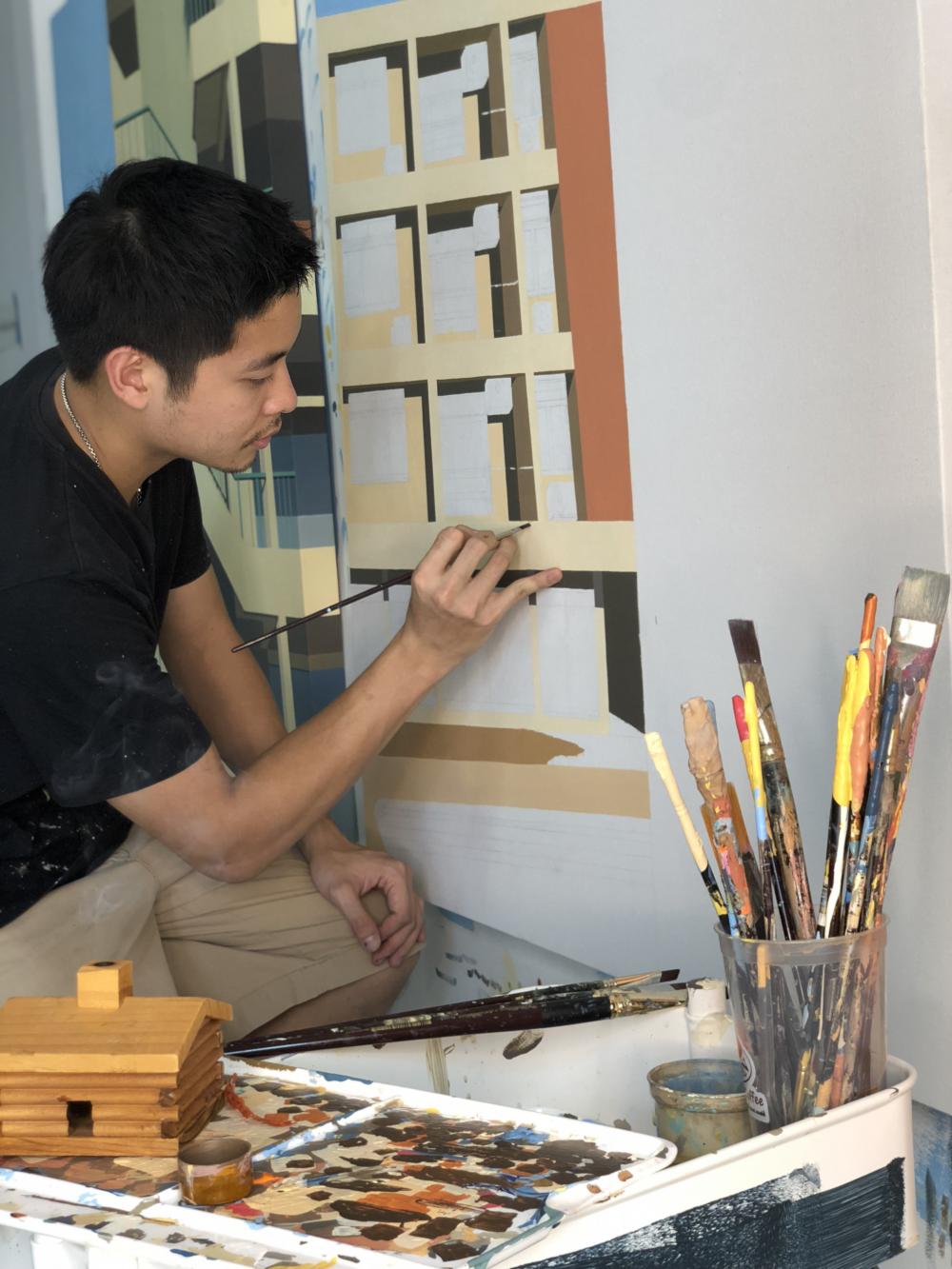 The pastel palette and defined shadows are a reference to the atmospheric light of the morning Sun, captured with the intent to express both the emotions of the viewer walking past and evoke the thought of these structures gradually becoming a memory as Bangkok continues on its path of change.

Despite being devoid of humans, the edifices he recreates on canvas have a life of their own. He captures angles with the tip of his paintbrush with impeccable perfection as the structures evolve to reach a point where the here and now amalgamate with the past and future.

Sharing how he developed an interest in capturing buildings as his subject and how this exhibition is different from his previous ones, Chayapong said that since he grew up in the city, he always considered himself a city kid even though he loved spending time in nature. This developed his passion to represent Bangkok in his own special perspective. Not long after, he built a systematic foundation for his visuals and the rest is history.

"With this exhibition, I'm not exactly using visuals to tell my story but using them as a tool to help flesh out my concept, which was an ongoing process after I decided to turn my life around and take a fresh approach. The more I cut out distractions from life, the more time I had to read and practise self-discipline. In short, I was able to connect with my inner self in a manner I had never encountered and I was able to find inner peace and emotional balance.

"The paintings from this series are still of mid-century buildings around Bangkok. However, I've made adjustments to make them suitable to the concept that I came up with and look more unified as a series."

Chayapong shared a pivotal life-changing experience that set in motion the coming together of his exhibition. 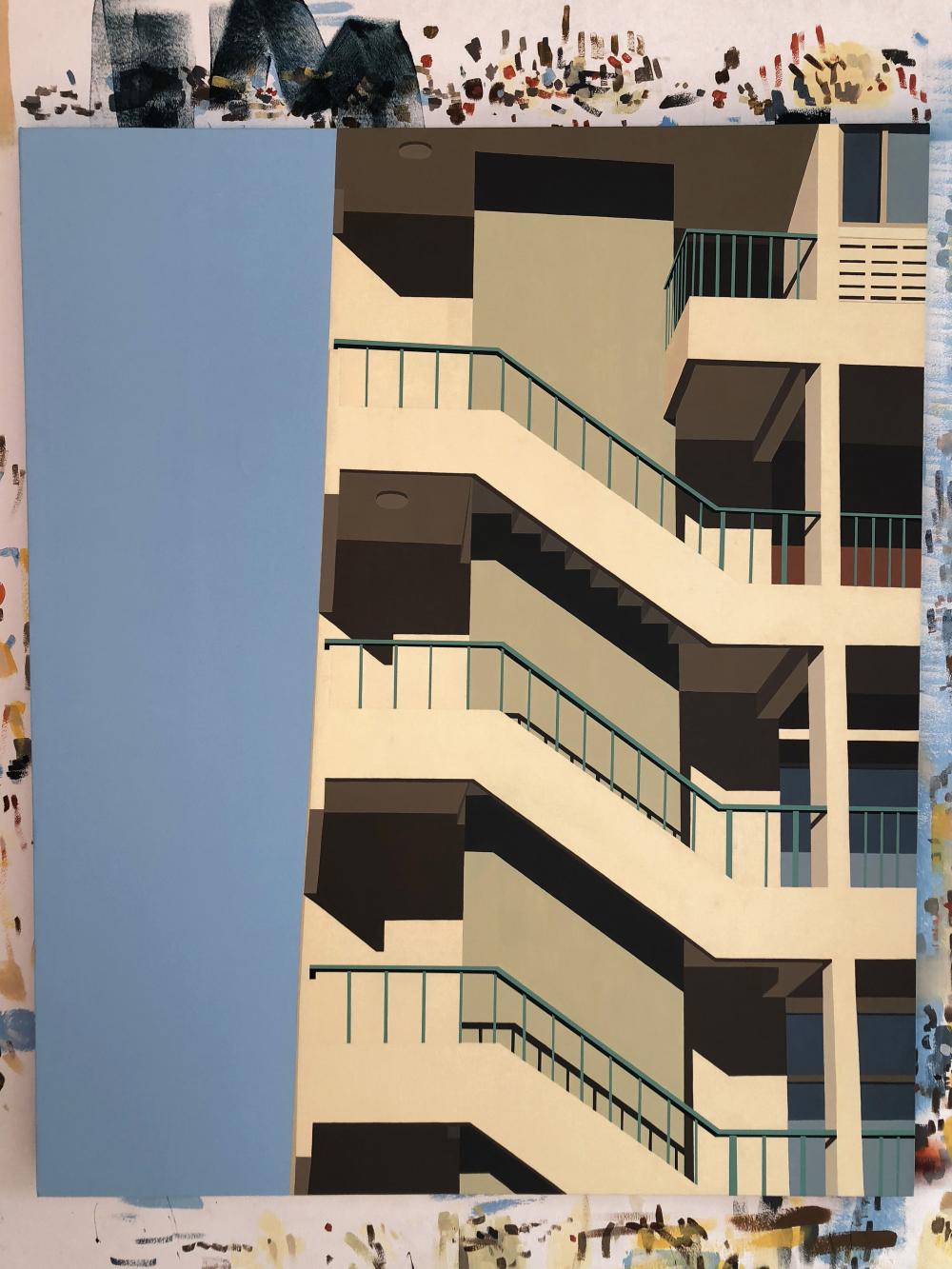 "It was at the end of 2019 when I volunteered to become a conscript for 10 weeks and boy was I in for an experience of a lifetime. Of course, we were cut off from the outside world and had no access to mobile phones but rather just a small notebook which I and the boys used to jot down notes to our loved ones. We shared our notes with each other which were often about how we missed and loved the people that most mattered to us. The bottom line was that we all missed home.

"I met people from all walks of life and that made the experience all the more special as we all desired to find that special place that would remind us of home. The lion's share of topics we conscripts talked about dealt with food and anything that would remind us of home. I have been studying abroad since the age of 11 so I know what homesickness is all about. Also for the first time, I was in a non-creative environment and the only colours I saw were white, grey and army green, which drove me insane. The only thing that kept me going was that small notepad on which I sketched for the duration of my time in boot camp."

Needless to say, Chayapong's mental and physical endurance were tested. He found himself lost in training and daily chores fit for the mundane life of a conscript.

Out of all his duties, what he looked forward to most was being assigned to clean the dorm bathrooms, which were surrounded by a scenic landscape and located away from the prying eyes of his drill sergeants.

It quickly became a place of refuge for him.

"Besides becoming a place where I could enjoy some me time, I liked this area because it overlooked the dorm building which was probably built during the 1960s and surrounded by a large grassy area. It was during one of my morning shifts just after the crack of dawn that I laid eyes on a beautiful sight that was so impressive it was etched in my mind forever. The angle I was standing at gave me a vantage point from where I could soak in the atmosphere and it reminded me of my paintings, but in real time.

"This is when I came up with the imagery of the current series, which focuses on morning light. That was the first layer and when combined with the feeling of being at home, that is when I came up with the idea that home is where the heart is. I quickly jotted down the emotions I was experiencing at the time as I did not have time to actually sketch the picturesque scene I was admiring."

Chayapong also thanks his conscription experience for helping him discern whether it was time to make drastic changes in life.

"Being away from social media for 10 weeks, among other life-changing experiences, really made me reflect just how it dominated my life. In fact, I found that disconnecting from it entirely made me better aware of my surroundings. I still use it to promote my work but that is the only reason I use it.

"Sometimes we humans need to go through boot camp to advance ourselves."

"Without Leaving Home" is available at lalanta.com/artists/chayapong-charuvastr.