The all-girl skateboard crew is back
Life
Arts & Entertainment

The all-girl skateboard crew is back

There's no denying that the return of skateboarding has not only become a hip new thing for the young generation but it is dominating pop culture.

In the last couple of years, we have seen more and more skateboard-inspired films, like the award-winning documentary Minding The Gap (2018), Jonah Hill's directorial feature debut Mid90s (2018), and Skater Girl (2021), a Netflix original about a rural Indian teen who discovers a life-changing passion for skateboarding.

Inspired as a TV spin-off of the 2018 Sundance indie hit Skate Kitchen by Crystal Moselle, Betty is now back on HBO for its second season. The series follows five young women on their journeys of self-discovery against the backdrop of New York City's male-dominated skateboarding scene. The six-episode season is now streaming on HBO GO with a new episode premiering every Saturday.

Just like Skate Kitchen, Betty features actresses who are real-life skateboarders. Moselle uses her unique vision to present a documentary-like storyline with beautiful aesthetics and stylish music and fashion. However, what makes Betty a great show to binge-watch isn't the fact that it's about skateboarding girls but rather how it manages to blend comedy with drama that delves into modern social issues such as LGBTI, sexism, racism, drug use, class privilege and the #MeToo movement. It's an authentic portrayal of the struggles faced by young women of Gen Z age.

Returning in Season 2 is the all-girl cast, including eccentric stoner lesbian Kirt (Nina Moran), introverted outcast Camille (Rachelle Vinberg), the street-savvy and part-time drug dealer Indigo (Ajani Russell), strong-willed YouTuber Janay (Dede Lovelace), and the shy, aspiring filmmaker Honeybear (Moonbear). Set in the last months of 2020, the season captures the pandemic in New York City, where masks were the norm. Life recently caught up with the girls in a round table interview via Zoom to talk about their skating routine during Covid-19 and to discuss the making of Betty Season 2. 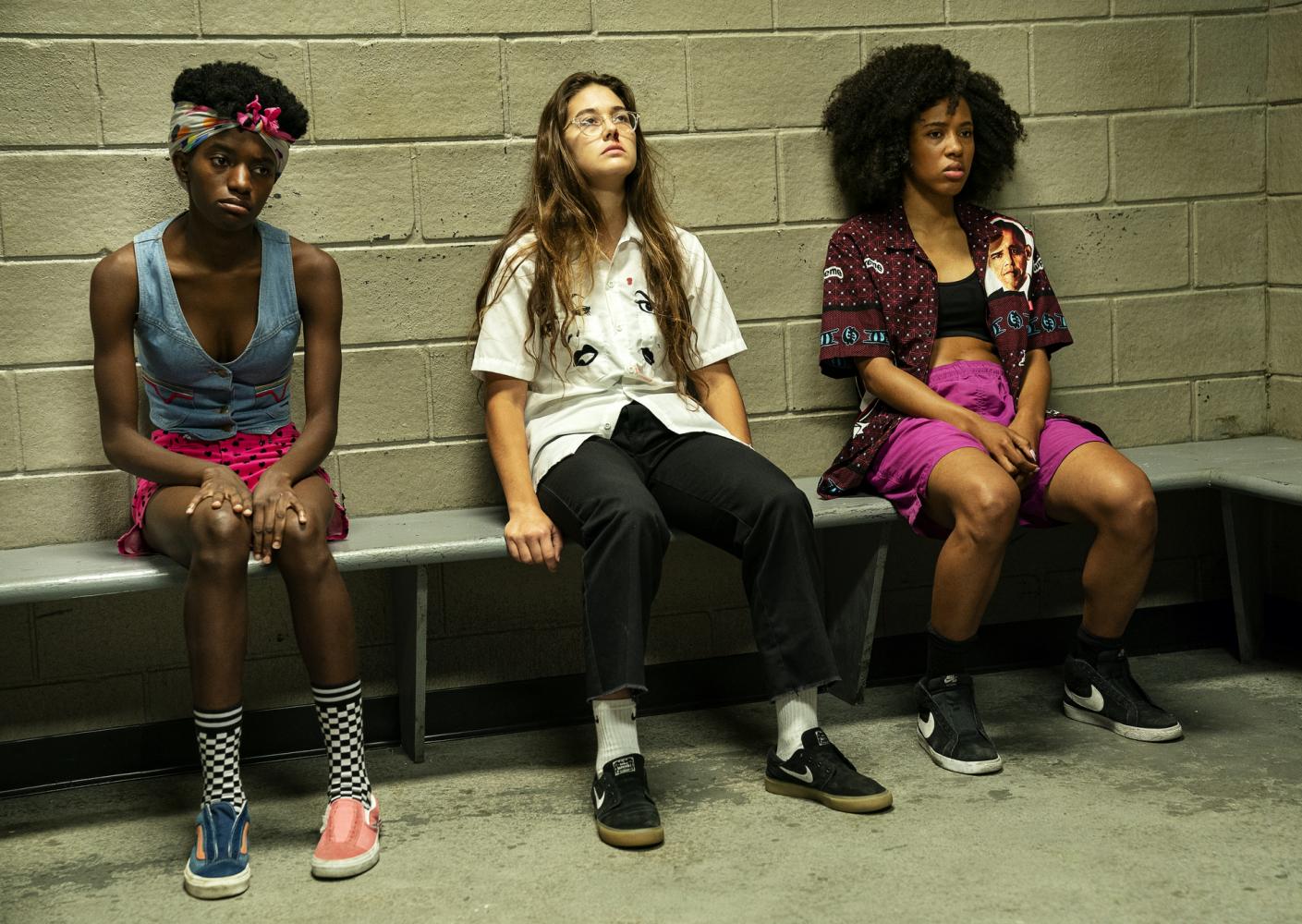 Why is the series named Betty?

Russell: Betty was actually a term used in the 90s for girls that would hang around the skate park or with skateboarders. But it's kind of derogatory, so it was more like reclaiming that title and reimagining what Betty and skater girls are actually like instead of their stereotypes.

It's been years since Skate Kitchen. From what you have been doing with the characters, did you ever think about how this could be a coming of age story? Did you ever want to see it that way?

Vinberg: Yeah, I see Skate Kitchen and both seasons of Betty as a coming of age story because it captures all of us. We started shooting when we were 17-18 and now we're going to be 23, so I think the show captures those times of our lives very accurately.

Russell: Yeah, we really got to explore ourselves, our personalities, and the versatility and ranges of emotions with our characters placed in different circumstances. So I think we've all grown a lot in the show really.

Apart from the show's main plot, the series is loosely based on your real lives. So, from your perspective, was there ever any apprehension regarding making a show about something you're so passionate about? Was there a worry that people on the outside just wouldn't get it?

Vinberg: I think maybe in the beginning. After Skate Kitchen, there were people and friends who said things and we thought they would have our backs but at the end of the day, we kind of realised this show is not for those people but for those who are scared to step on a skateboard or scared to be themselves. At the end of the day, if people are going to comment online and that's all they're going to do, then it doesn't really matter because we can take that.

Russell: It was my desire to share a story that outweighed the fear of letting myself be vulnerable and putting something so personal out there.

The show looked so realistic and felt almost like a documentary. Could you describe the way you worked with the director on set?

Moran: So basically we would consult in the writer's room. We would share parts of our lives and stories that seemed like they would fit well into the plot and sometimes they were chosen.

Russell: The way she works meant we shot a lot of improv. We were just given guidelines for different scenarios and then we played them out. I think that's why it feels authentic and natural because she gives us room to really explore those circumstances and the character.

Dede, your character Janay is described almost like the leader of the group. And although her character was involved in so many confrontations in the first season, it seems that's not the case in the new season. Could you describe what happened with Janay's character?

Lovelace: I mean there's only so much that Janay can do. I think she means well but everybody in the cast is growing and going through their own situations. So, at times, it's nice to see that she cares enough to bring everybody together and she wants everybody to see the bigger picture. However, it's also kind of overextending and overexerting, so I think the new season is a welcome change because compared to before, she takes the time to enjoy herself and being young. Yeah, Janay is figuring it out.

Ajani, there are some scenes in the first season where your character Indigo takes a modelling gig but then storms off in the middle of a fashion shoot because she is forced to act out racial stereotypes. Is it true that the scene actually happened in your life?

Russell: Yes, I wanted to put this scene into the show because it's something that I see often. I've been modelling for a lot longer than I've been skateboarding, so I've had to encounter experiences like that. That was the first time I ever walked off the set and I've endured other terrible things as well. I noticed the hair they were trying to put on me and the other girls. Just the way they were shooting everything was awful and I kept hearing the make-up artists say, 'Yeah make her more ghetto', and I was disgusted and decided I could not work in this environment. Yeah, I'm very grateful to be able to share that story.

What did you skaters do during the pandemic? And what were your lives like over the last year?

Vinberg: Honestly the pandemic wasn't that terrible for skateboarders. Think about it. All these places were closed and empty, the kids were out of school, which meant there were no security guards telling you to get off the sidewalk [laughs]. At one time last year, I was talking to friends who were skating together in a skate park and thinking what was happening in the world is horrible. But you know, it was kind of fun for us.

Russell: Yeah, the skating aspect of it was great.