Fish out of water

Pixar's latest animation Luca is an enjoyable summer flick with great themes for young kids, but the storyline fails to impress

Less than a year after the award-winning animated feature Soul, Pixar is back with a new feature called Luca. For whatever reason, the studio has decided to skip a theatrical release altogether for this film, which means we can appreciate it on the Disney+ streaming service.

Luca is a charming story about two underwater creatures that meet and become friends and go on adventures in a human village. On the surface, the story is about friendship and having fun in the summer but the film also has valuable lessons for young kids, especially when it comes to not hiding or being ashamed of who you really are and sharing that with people despite what they may think.

The film is directed by Enrico Casarosa and written by Jesse Andrews and Mike Jones. Luca is set in the sunbaked Italian town of Portorosso where shy young sea monster Luca (Jacob Tremblay) lives day-by-day with his family under the sea. He's forbidden from going to the surface due to the threat of humans and fishermen that live nearby as told by his parents. But Luca yearns for something more and that opportunity arises when he meets with a mysterious boy named Alberto (Dylan Grazer) from the surface. However, when it's revealed that Alberto is also a sea monster in disguise, Luca decides to step out of the water and venture onto dry land as Alberto shows him how living as a human can be fun. 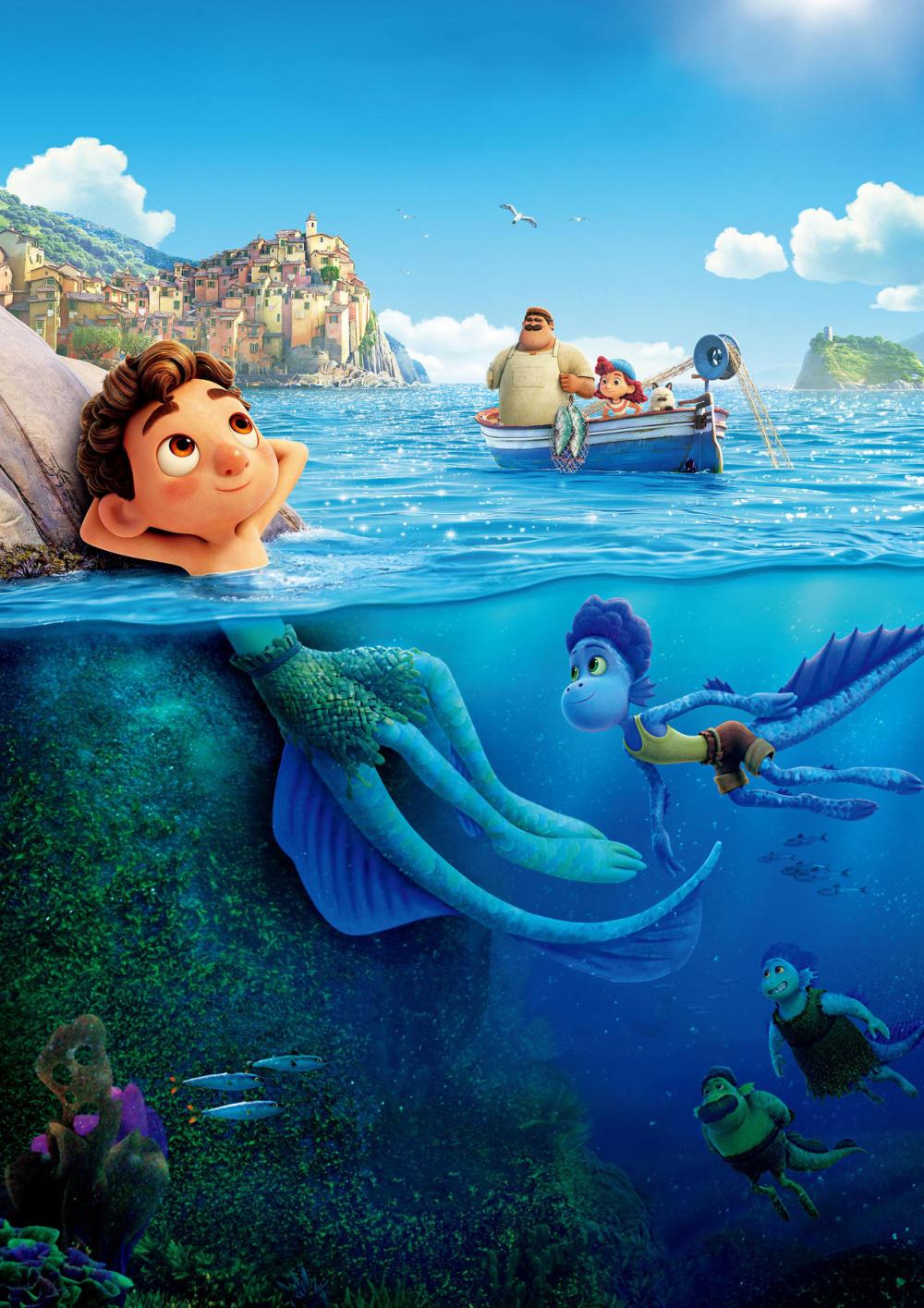 In the land of humans, the town hosts an annual race called the Portorosso Cup. Luca and Alberto set their eyes on the prize money which would let them buy a Vespa, which they see as a ticket to freedom. But Portorosso is also famous for hunting sea monsters and any time the boys are exposed to water, they transform back into sea creatures and risk getting caught.

Fans of fish-out-of water-type movies like The Little Mermaid (1989) or Splash (1984) might find this premise familiar. However, it really is just a movie about two sea creatures adventuring in an Italian town. There are no grand quests, no reflections on the nature of life or emotions or anything like that. The simplicity and clarity of the smallness of Lucas' world match the story of friendship and exploration as a little coming of age story.

Most of the characters in this are really charming and likeable. I particularly liked the quirky girl Giulia (Emma Berman) they meet and the outcast friendship they all form together. Her father is instantly likeable and is a unique character. The villain character, Ercole (Saverio Raimondo), is by far my favourite. This kid is so hilariously annoying it reminds me of Skinner from Ratatouille (2007). Of course, our protagonist Luca is a nice kid who isn't afraid to follow his dreams and I really loved the bond he formed with Alberto. The movie really sold me on the emotional moments these characters have. 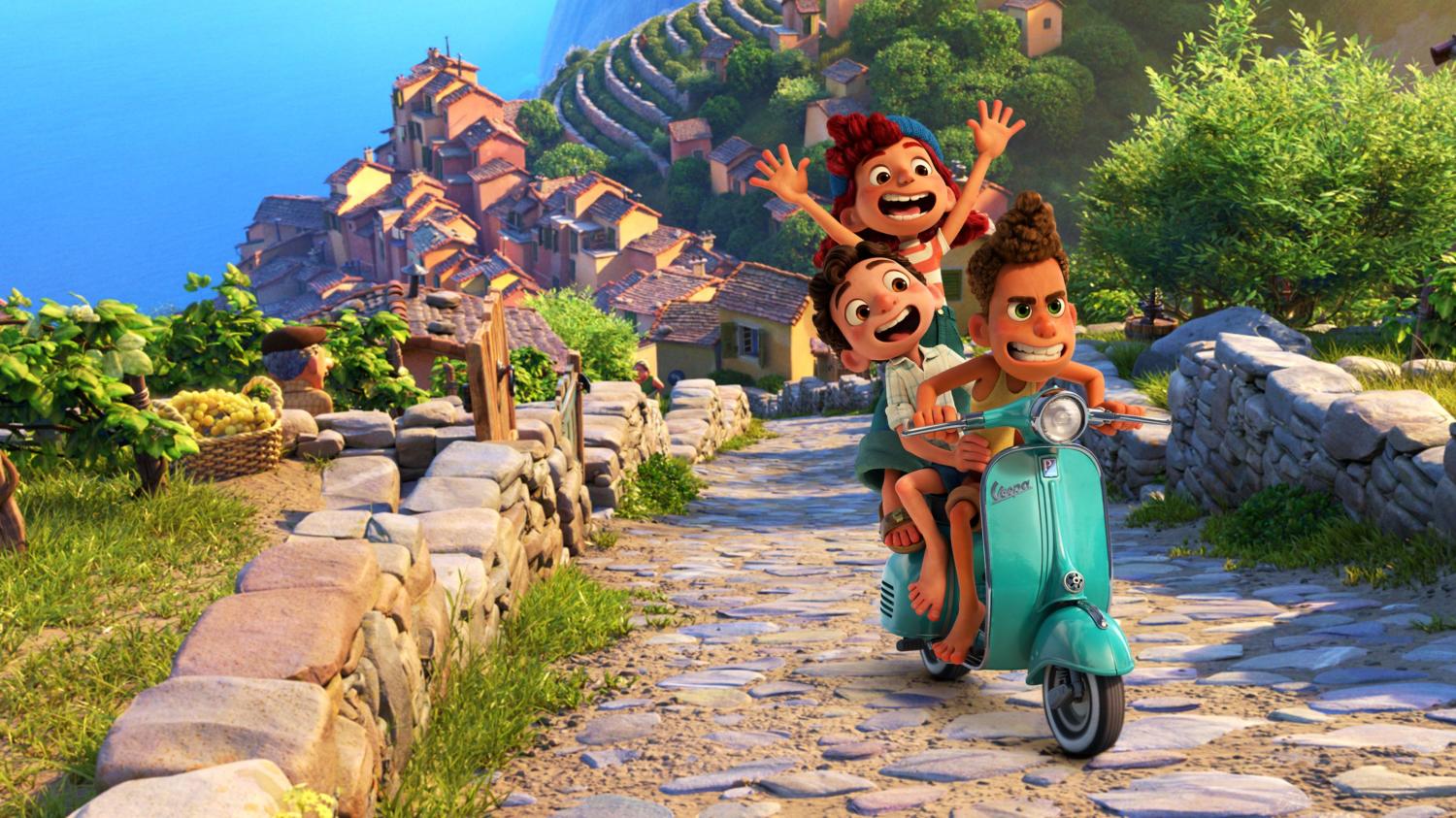 The first thing that comes to mind when I think about Luca is how jaw-droppingly gorgeous it is as the animation is luscious and vibrant. The character designs are more cartoony than other Pixar features and almost have a claymation feel to them. The backdrops -- while not fully photorealistic -- are nonetheless breathtaking. The simple premise of this movie offers lots of space for laughter. There's plenty of jokes thrown in throughout the film to keep it nice and light-hearted. However, I just can't help shake the feeling that this is one of Pixar's lazier efforts that doesn't live up to its standard.

All my issues with the film have nothing to do with the technical display or the actors but the story. First off, we don't really understand what Luca and his family do under the sea. The film begins with him leading around some mindless fish but we don't have any backstory on them at all like why they're afraid of humans or being found by them. Also, when Luca walks out of the ocean into the fresh air and meets Alberto, he transforms into a human being, but the movie makes no attempts to really explain how this transformation works. Luca and Alberto's backstories are too thinly drawn for viewers to really emotionally invest in. The ending of the film also didn't quite have that punch, whether it be emotional or something completely unexpected. Moreover, I felt this town accepts these sea monsters a little too quickly, considering how much anti sea monster imagery there is. While I found the final scene to be quite sweet, the climax itself was kind of a little underwhelming. Pixar movies are supposed to make you cry or feel or think. They're supposed to be whimsical adventures but also be emotionally moving experiences that get better as you get older. Unfortunately, Luca isn't on that level. As I have said, the themes ring true in so many ways but the story's main beats are a little run-of-the-mill and predictable.

However, while it is hamstrung by a lack of depth, storytelling and character development which keeps it from reaching Pixar's stellar storytelling reputation, it is a beautifully done animation with captivating characters and profound and resonant themes. Luca is still an enjoyable summer flick about adolescence and independence.