Not so pretty in pink
Life
Arts & Entertainment

Not so pretty in pink

Pink Man appeared for the first time on Silom Road in 1997. The chubby poker-faced middle-aged man wearing a shocking pink suit was created by renowned artist and photographer Manit Sriwanichpoom.

The artist's inspiration for the iconic character came after he saw shoppers at a supermarket filling their shopping carts with piles of products. As a satire against consumerism, he decided to stage a performance art project on Silom Road with Pink Man pushing an empty pink shopping cart around.

"Pink Man in his pink suit represents an executive or a powerful man who entertains audiences and triggers them to questions relating to consumerism. The character is played by a poet and performing artist, Sompong Thawee, who has anger like a time bomb. In Thai society, many people are repressed like time bombs, which can explode without any warning. Sompong's anger reflects the anger and dissatisfaction that some Thai people keep suppressed inside them. I chose the flashy suit because pink is a very eye-catching colour. Once you see Pink Man, he is imprinted in your memory," explained Manit.

Following positive feedback, Pink Man was later used to address many other social and political issues in Thailand. For more than two decades, the character has been present in various forms. To watch Pink Man is like going through a chronicle of Thai history. For example, to criticise a tourism campaign, Pink Man appeared at several places such as a farm, in front of historical sites and in markets. To tackle materialism and self-image, Pink Man dressed up in several styles, but still in shocking pink. Pink Man covered the eyes of a student holding the national flag to raise questions about nationalism. 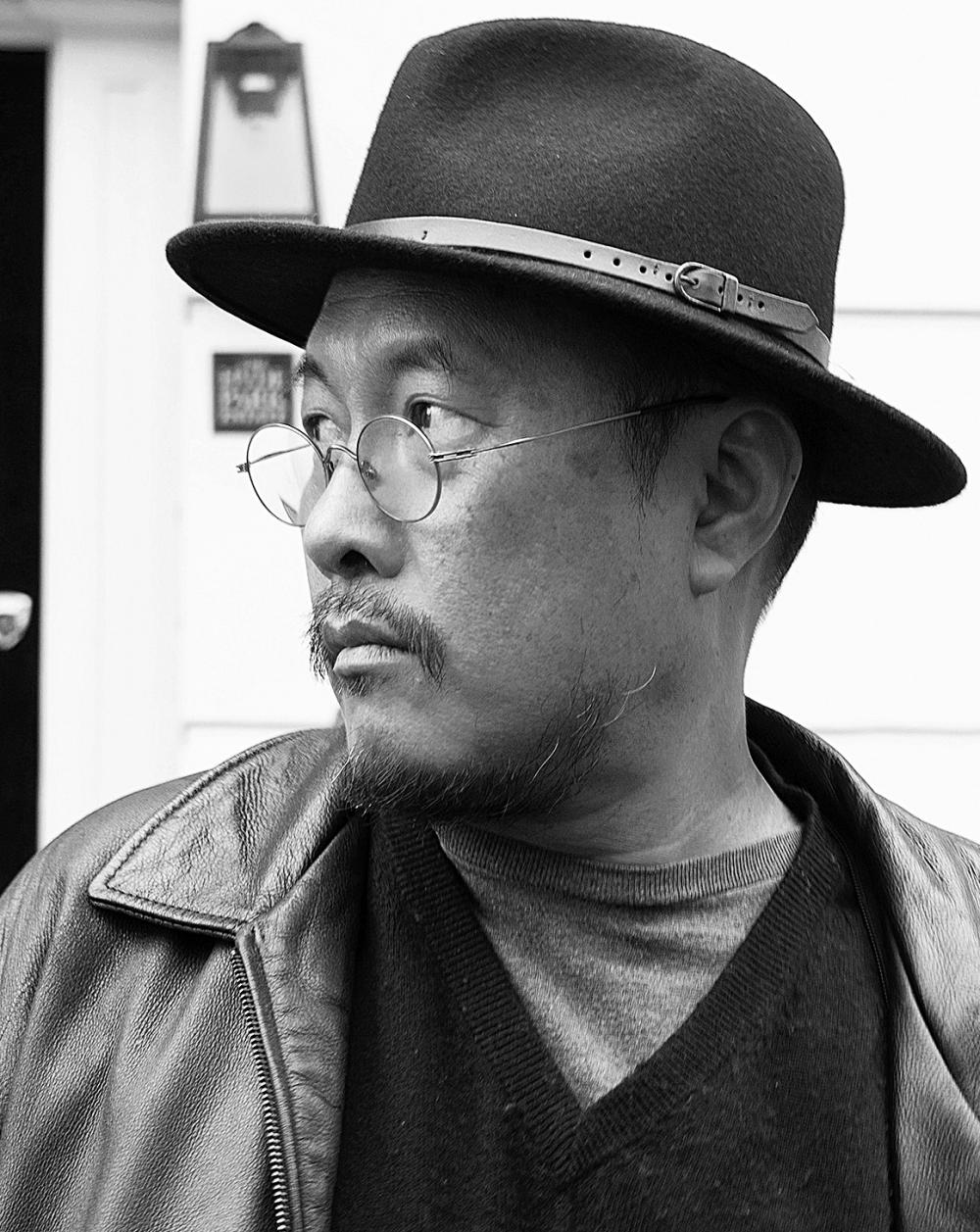 And now people can read all about Pink Man and a chronicle of Thailand from 1997 to 2018 in the book, Pink Man Story, currently available at kathmanduphotobkk.com and facebook.com/kathmanduphotogallery. In light of this, Life spoke with Manit about the iconic character.

Why did you decide to debut Pink Man in the form of performance art?

I have always been interested in acting and performance art. I think art is something created to spark conversations in society. I planned to create only a couple of events of Pink Man, so that the character would spark conversations and then I would quit the project. However, after the debut performance appeared in the media, people talked about Pink Man and curators overseas were interested. My friends told me to not kill Pink Man and to have the character appear in more situations. As a result, I kept this character and developed the Pink Man series, so he appeared in artistic forms to comment and criticise issues that I was interested in.

Why did you want to tackle the concept of consumerism?

Capitalism cannot grow without consumerism. Before Thailand's financial crisis in 1997, Thai people had a high-income rate and spent money extravagantly. Advertising companies encouraged people to spend money and people became materialistic. I felt that something was wrong and questioned this kind of prosperity. When the economic bubble burst, it was revealed that many Thai people were in debt because they took out loans from foreign investment companies. The value of the Thai baht dropped 50% when converted to the US dollar. It was like Thai people lost 50% of the money that they borrowed. The question is who was responsible for what happened. That's why I question capitalism and consumerism. 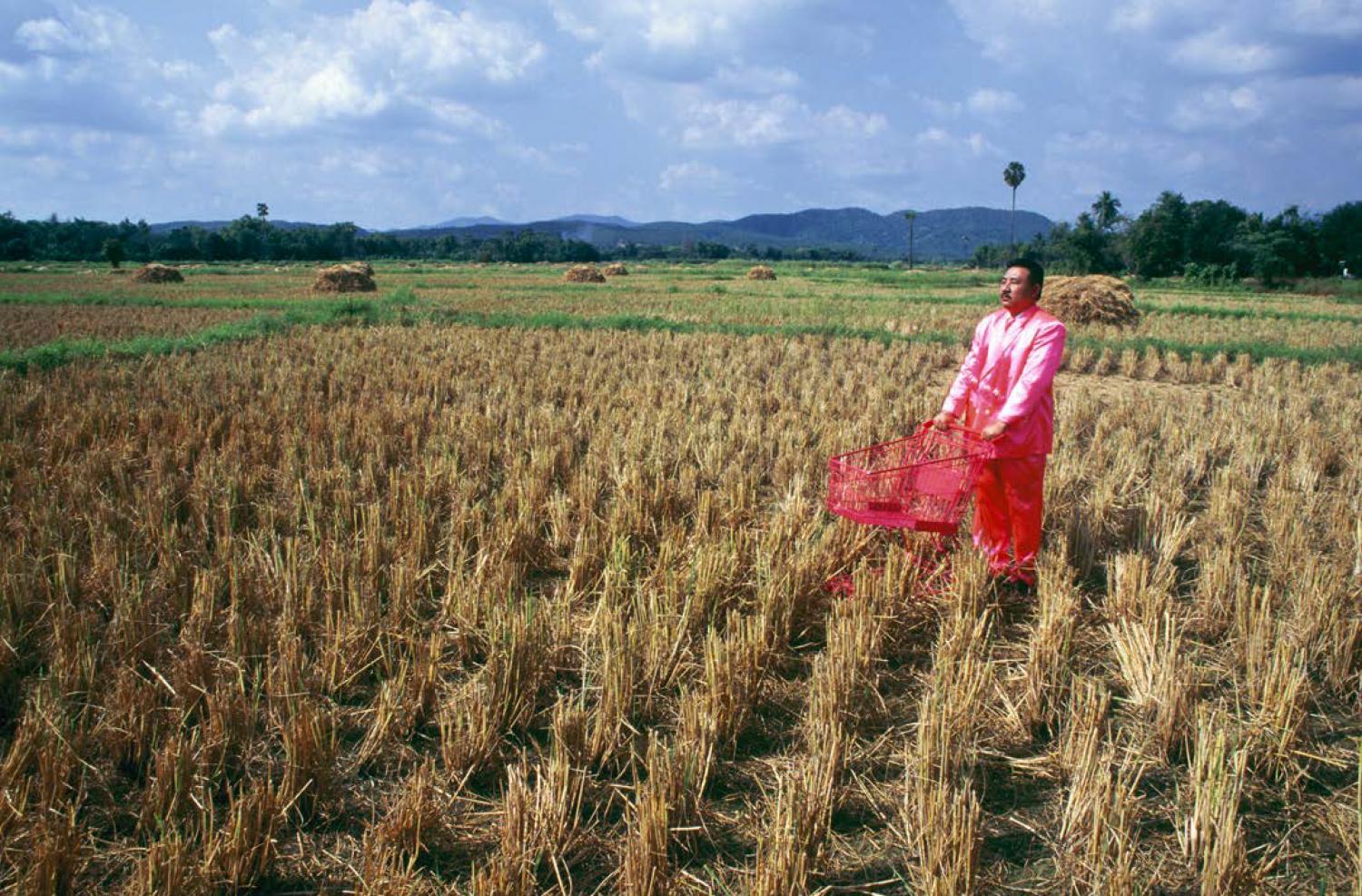 Why did you criticise the tourism campaign in 'Pink Man On Tour'?

Thailand's tourism campaign was launched when Prem Tinsulanonda was the prime minister. The campaign claimed the tourism industry requires low investment because Thailand already has cultural and natural resources. However, tourism has negative effects on the environment. During the Covid-19 pandemic, we can see that the tourism industry is vulnerable and the decline in the tourism business has severely impacted the country's economy. Tourism is also another form of consumerism since it is more about quantity and price, not quality and value of learning.

What was the feedback in Europe to 'Pink Man On European Tour'?

Pink Man was invited to perform in public and on streets in Europe such as Austria, Denmark and Italy. People in Europe are also interested in consumerism and thought Pink Man represented Asian people because although the suit is a universal outfit, shocking pink reminds them of Asian people due to its flashy colour. Audiences liked Pink Man because they like humour and contemporary issues. 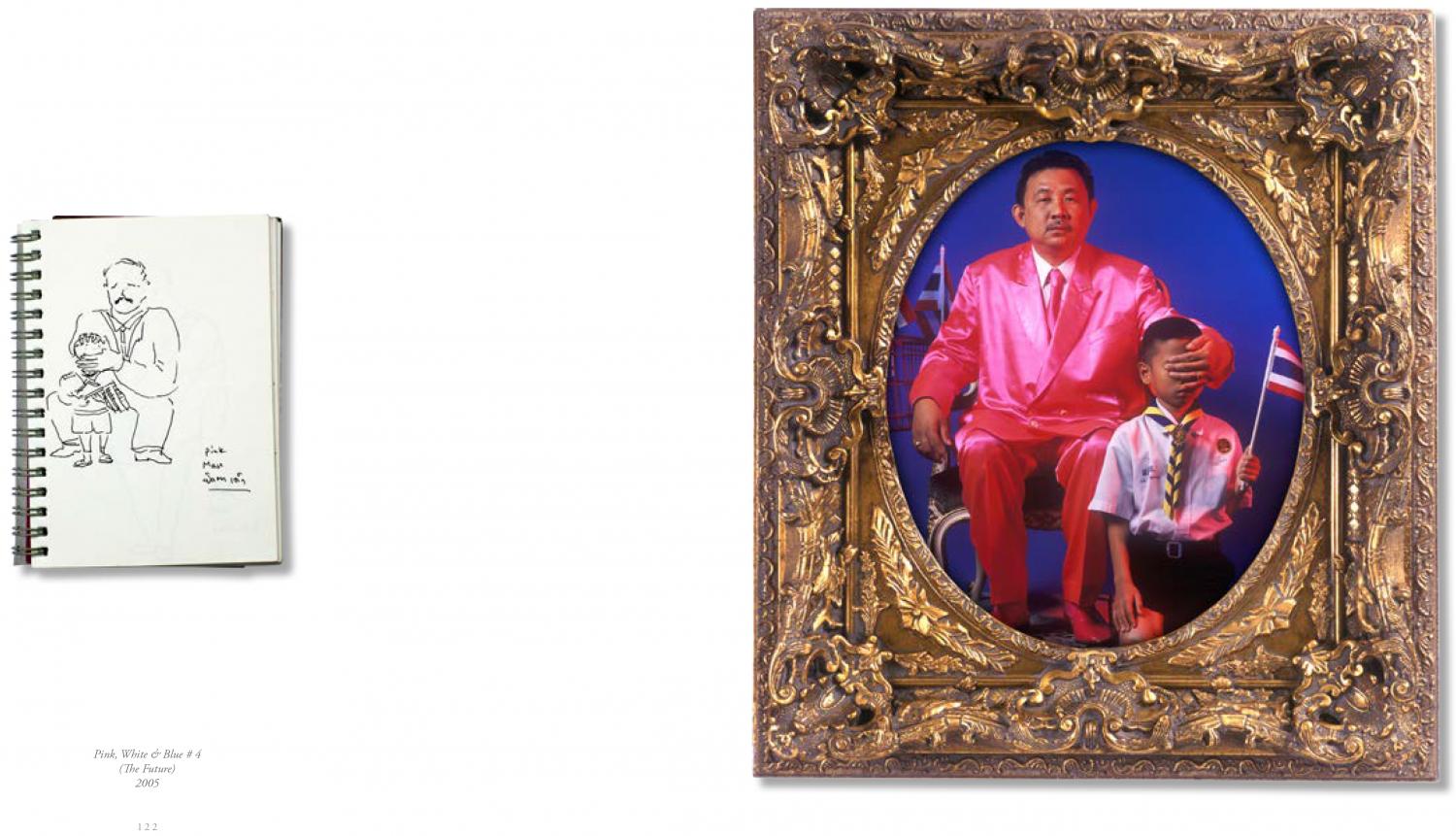 What was the idea behind the collection 'Horror In Pink', in which Pink Man appeared at the Oct 6, 1976, massacre?

The collection was inspired when a politician won votes in an election even though he was the supporter of a group which massacred students in 1976. It is about historical memory which questioned the Thai education system. Is historical memory controlled by someone or some groups in order to make people either remember or forget particular events in the past?

Why did you want to raise questions about nationalism in the collection 'Pink, White & Blue'? 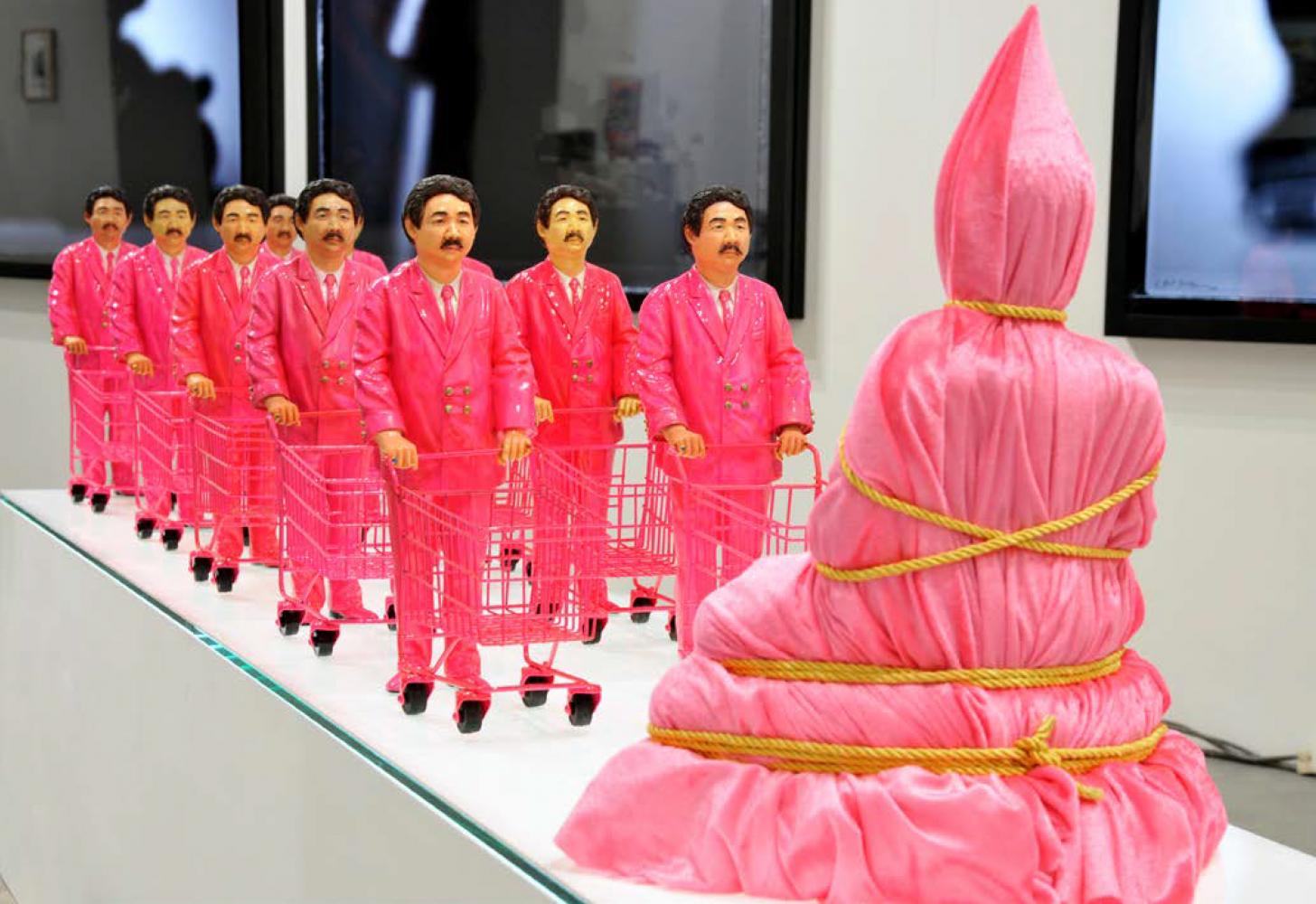 Can you tell us more about 'Pink Man: Icon Of Consumerism', where Pink Man was developed into a sculpture?

Thai people can worship many things, from trees wrapped with colourful fabrics and two-headed animals to sewage drain water. In Thailand, country heroes or famous monks can become monuments and sacred images or sculptures. I created the sculpture of Pink Man with the intention of making him like a sacred icon, 'Icon Of Consumerism'. In the collection, Pink Man meets with traditional sacred images such as a Buddha statue, Guan Yu statue and the goddess of rice statue. It is a confrontation between traditional religious statues and a modern statue with a concept of consumerism.

How did you come up with the idea of the ending of Pink Man in 'The Last Man And The End Of His Story'?

Pink Man was invited to perform in New York in 2018. Gun violence and mass shootings are issues in the US that cannot be solved. I decided to end Pink Man in the US. A pink body bag with a mannequin inside was exhibited on the streets. This is like the image I saw of an American shot on the street.

Despite the ending, I am planning a performance of Post Pink Man, where Pink Man is an angel who comes to visit Earth, but due to the pandemic, the performance has been postponed. 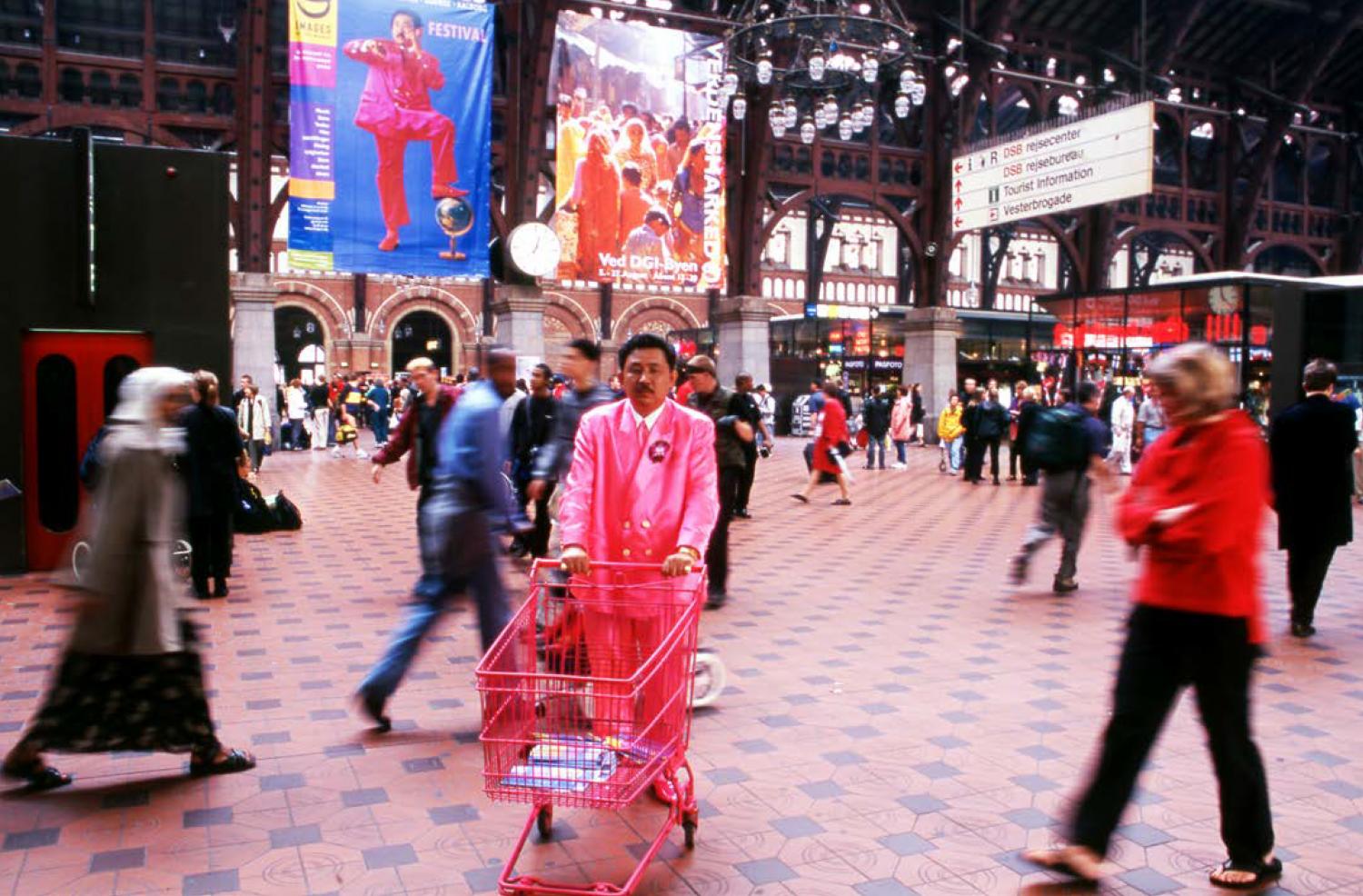 Politics is related to everyone's life. In a democracy, everyone has rights to express their opinions and concerns about the country. I criticise or comment because of my concern or worry about certain issues. As an artist, I am lucky to have the means to express my ideas and it is necessary to protect my freedom of speech. 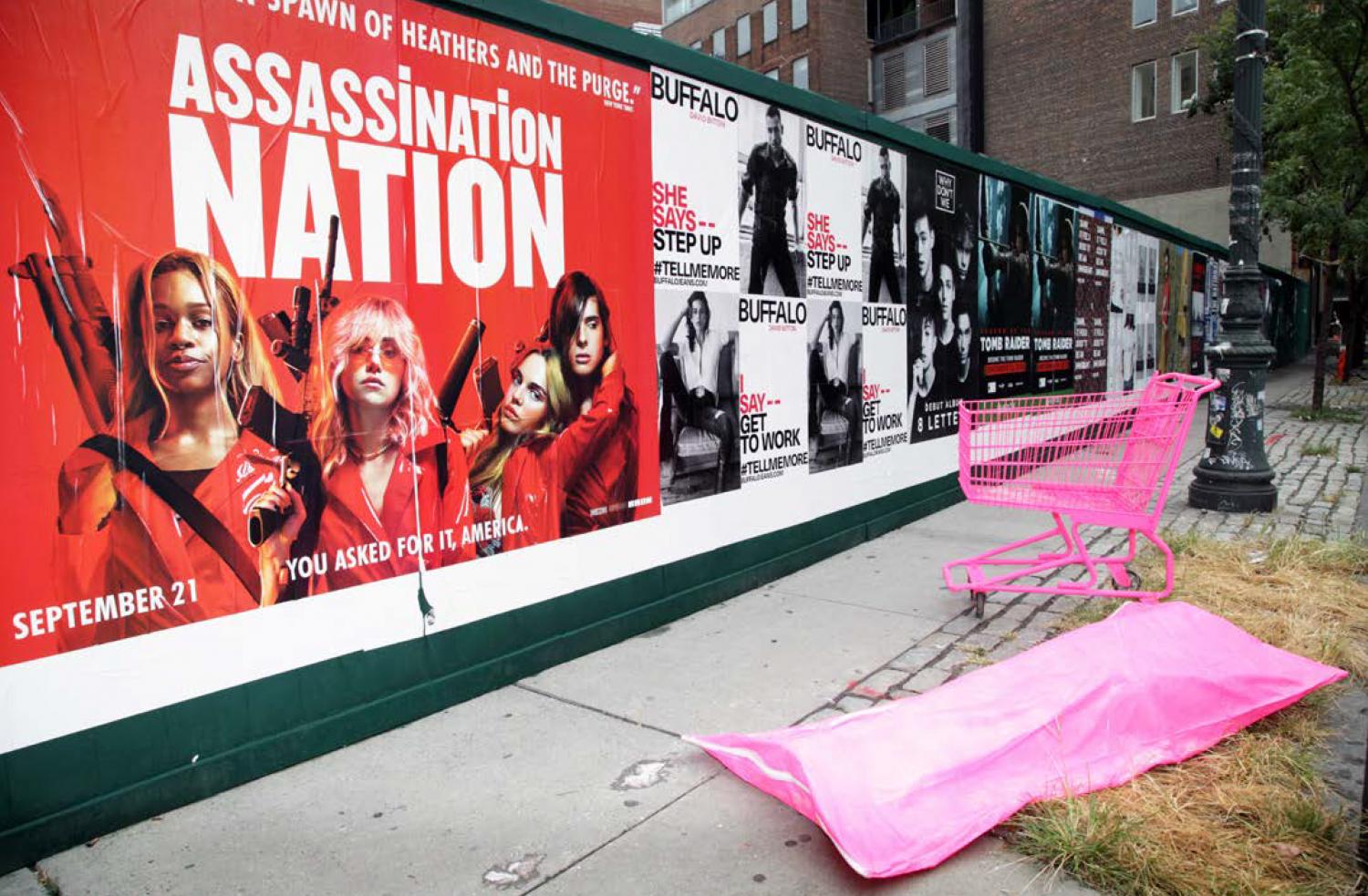 'The Last Man And The End Of His Story'. (Photo: Manit Sriwanichpoom)