Dreams of the City of Light
Life
Arts & Entertainment

Dreams of the City of Light

If you plan to visit France for the 2024 Olympics take a virtual stroll through historic, beautiful Paris on Google Arts and Culture's platform

The City of Light (La Ville-Lumière) will play host to the Olympic Games in 2024, and the French capital's colours will be on display to lure sports lovers from all over the world. 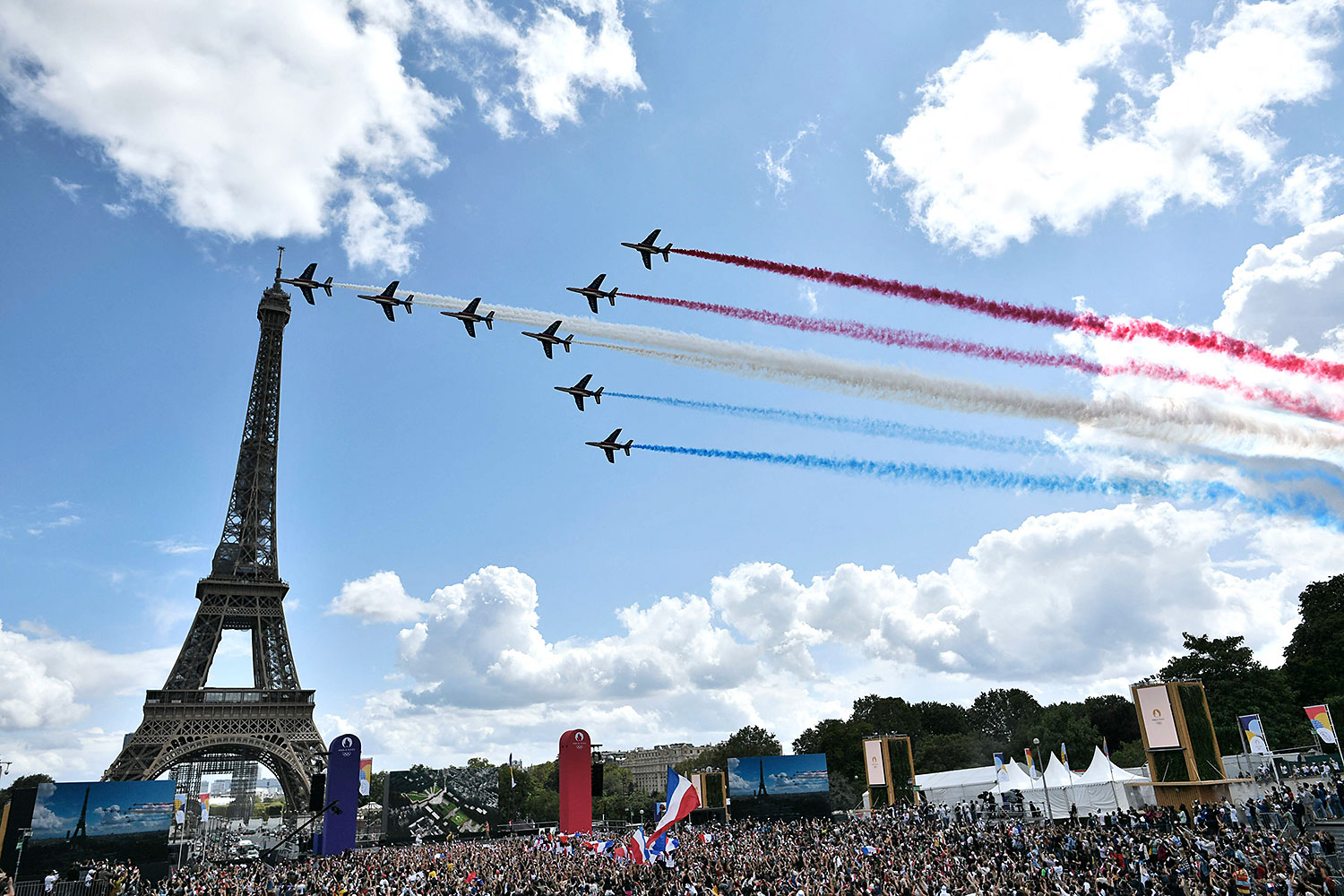 A virtual tour of the Eiffel Tower allows visitors to enjoy a panoramic view of Paris from home. (Photo © eiFFeL toweR)

Those planning a trip to Paris in the next three years may warm up and experience the splendour of cultural heritage and rich history by taking virtual sightseeing tours and viewing online exhibitions on Google Arts and Culture's platform.

Scrolling up to the top of the Eiffel Tower allows you to take in the panoramic views of Paris and envision yourself wandering through the realm of haute couture and fashion, while the tower collaborates with Google Arts and Culture to curate an online exhibition that takes visitors back to its roots.

A collection of old black-and-white photographs and paintings depict the construction of the Eiffel Tower to mark the 100th anniversary of the French Revolution and pledge to the 1889 Exposition Universelle.

Gustave Eiffel spent two years building the 300m tower in the heart of the city and his masterpiece became a symbol of technological prowess in the industrial era. All 18,000 components were produced at his factory in Levallois-Perret on the outskirts of Paris and each was specifically designed and calculated, then traced out to a tenth-of-a-millimetre precision before being assembled.

Gustave Eiffel was awarded the Légion d'Honneur for his vertical, technical and architectural achievement using 18,038 metal parts, 2.5 million rivets, 7,300 tonnes of iron and 60 tonnes of paint in the construction. Currently, this tower attracts almost 7 million visitors a year. 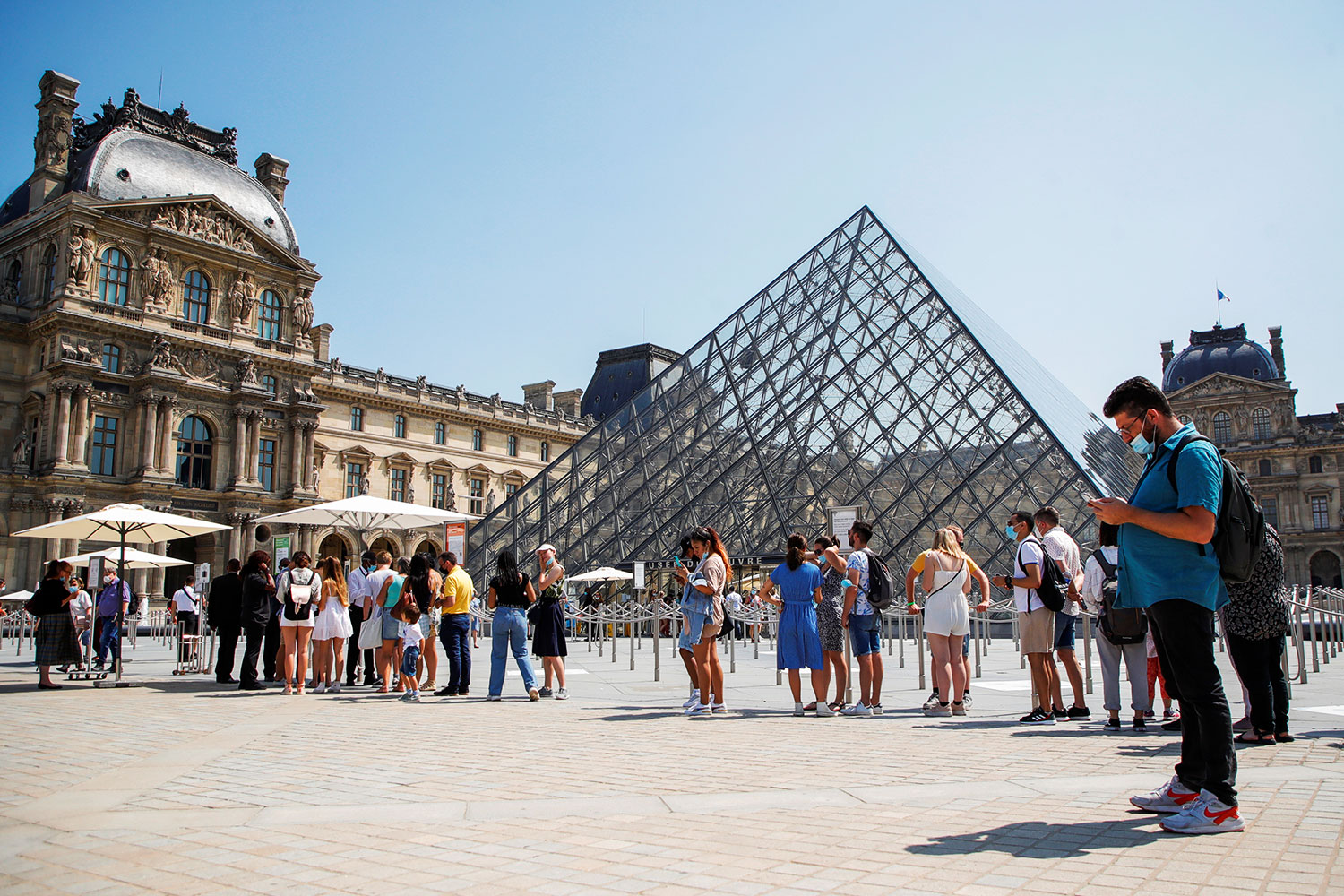 A virtual tour can begin at the Hall of Mirrors, which was built in 1678 and embellished with 17 windows, 17 mirror-ornamented arches, eight busts of Roman Emperors and eight sculptures of ancient divinities.

Zooming in and out, visitors can catch a glimpse of a striking barrel-vaulted ceiling, which is covered with 30 paintings by artist Charles Le Brun depicting the first 18 years of Louis XIV's life. This multipurpose hall served as a concourse and reception chamber to celebrate regal magnificence. In 1745, Marie-Antoinette danced here at a gala honouring her marriage to future King Louis XVI.

The War Salon is right next door, where a collection of gilded bronze sculptures depicting the king's insignia, trophies and shields is displayed on the marble walls. Continue scrolling as visitors enter Louis XIV's bed chambers and picture a scene, in which the king woke up at 8.30am every day to wash his face, comb his hair, shave and dress before breakfast.

Also on view is a reproduction of the bed from the summer furnishings, which was used between 1723 and 1785 and commissioned by Louis XV when he returned to live in the palace.

The Coronation Chamber will transport visitors back to 1789 when rioters stormed into the Queen's Apartment to mark the start of the French Revolution.

Its walls are covered with paintings by artist Antoine-Jean Gros depicting the Battle of Aboukir in 1799 and artist Jacques Louis David capturing historical events such as The Distribution Of The Eagle Standards from 1810 and The Coronation Of Napoleon from 1807.

At the same time, a series of Sciences at Versailles online exhibitions showcases a rare collection of antiques, paintings and ornate decoration that illustrates the booming period of science and astronomy in France. 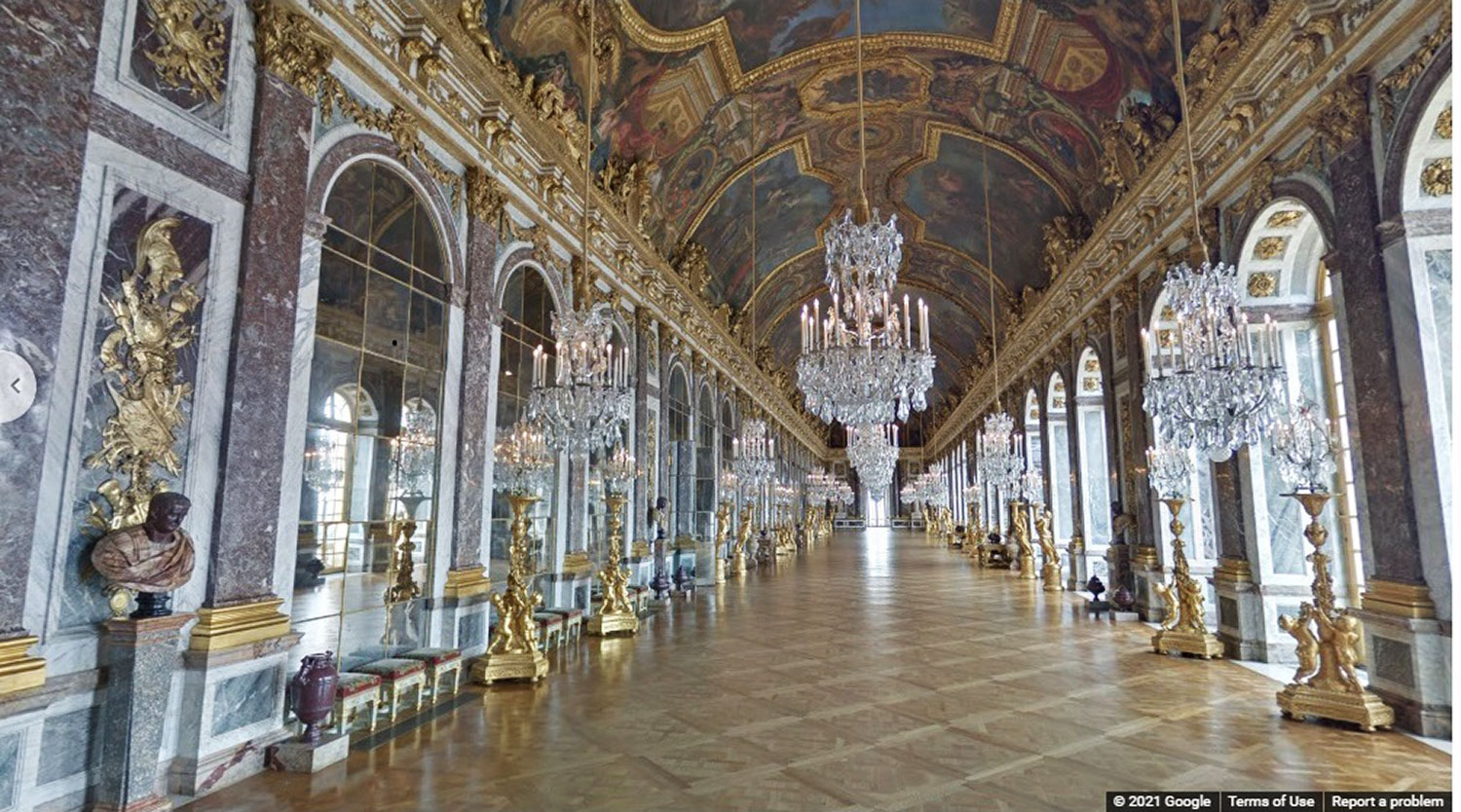 The Hall of Mirrors in the Palace of Versailles.

The Coronation Chamber in the Palace of Versailles.

Created by Jacques Louis David, a painting in the Coronation Chamber depicts the army taking an oath to Emperor Napoleon. (Photos © The Palace of Versailles)

On display is a sketch of the world's oldest Paris Observatory built from wood in 1667, the Terrestrial globe created by French mathematician Guillaume Delisle, Jean-Baptiste Delure's Armillary sphere with the Earth setting up at the centre of the zodiac system and the great astronomical pendulum designed by Claude-Simeon Passemant in 1754.

Art enthusiasts can now enjoy an overnight stay at the Palace of Versailles while pretending to be a princess. After undergoing an extensive restoration, Le Grand Contrôle recently reopened its door to welcome guests and offers a range of 14 luxury rooms and suites for an exceptional holiday experience.

With access to the 2,000 acre gardens, the interior decoration highlights a mixture of vintage furniture and artworks with modern technology to celebrate the rich history while providing guests with contemporary comfort.

Focusing on sustainability, geothermal energy has been utilised to heat the building and LED lights breathe new life into antique chandeliers, while single-use plastics are banned in the rooms.

Looking out the windows, guests can enjoy beautiful views of the Orangery Garden and the Lake of the Swiss Guards, while the lighting has been delicately crafted in unique 18th-century fashion. The Alain Ducasse restaurant is devoted to traditional French cuisine using local produce to brighten up the dining scene.

Leaving the palace, visitors can check in at one of the world's largest opera and ballet houses. The Opéra National de Paris was founded by Louis XIV and is now home to two theatres -- the Palais Garnier (1875) and the Opéra Bastille (1989), where a troop of famous composers such as Rameau, Gluck, Rossini, Verdi, Wagner, Gounod, Massenet, Poulenc and Messiaen made their debut. Each year, the national opera offers more than 350 performances to develop and promote French performing art heritage. 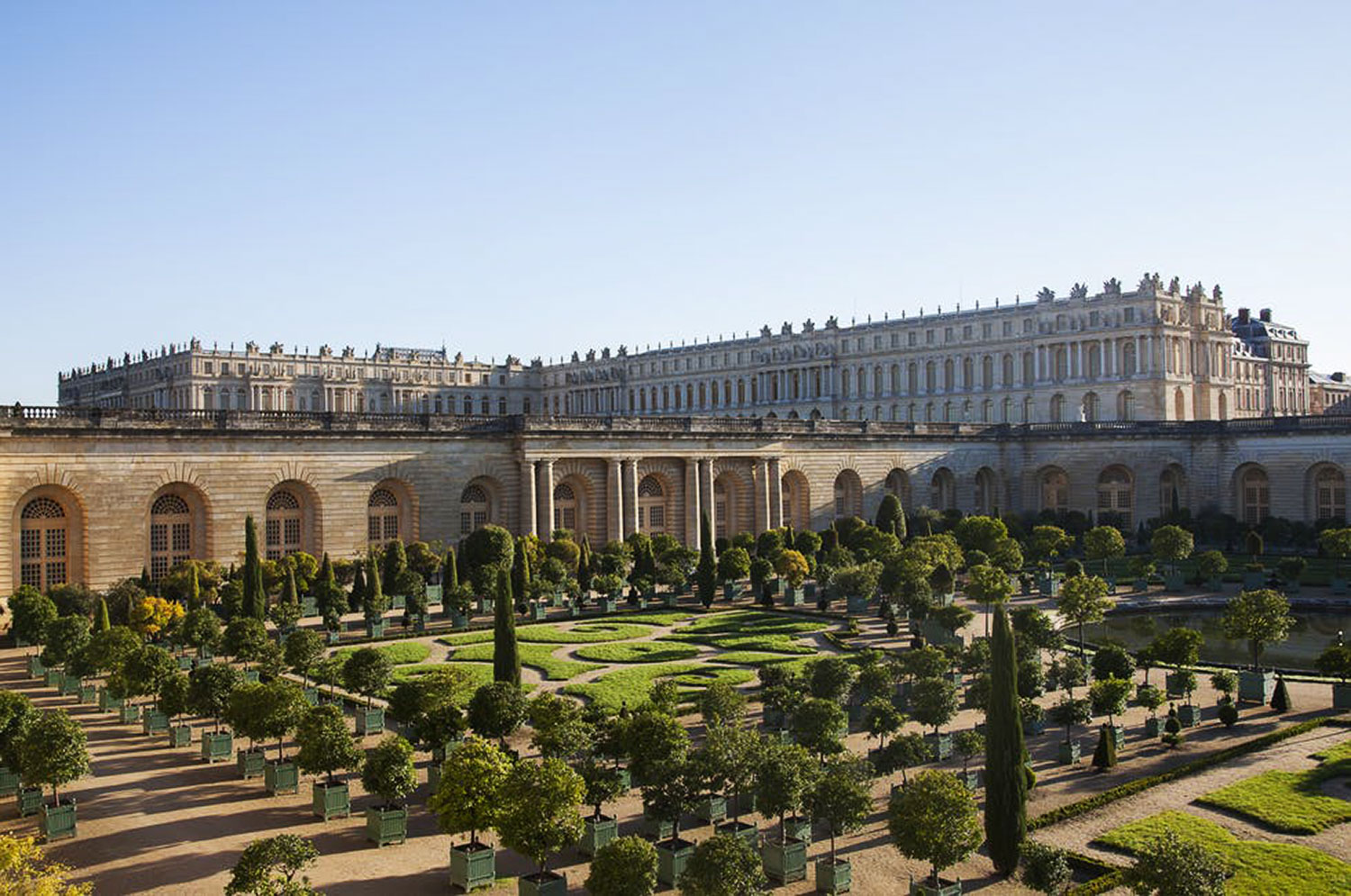 Walking through the entrance, you will be greeted by a long gold corridor with an astonishing painted ceiling portraying Greek characters such as Calliope, Euterpe and Clio gathered in heaven.

My adventure continued to the Musée d'Orsay Paris on the banks of the Seine. It was originally built in 1898 as the Gare d'Orsay railway station before being converted into a museum in 1986.

The museum is home to more than 3,000 works, ranging from decorative arts to photography and sculptures to paintings such as Starry Night and The Church At Auvers-sur-Oise and View From The Chevet by Vincent van Gogh as well as The Luncheon On The Grass by Édouard Manet and Poppy Field by Claude Monet.

Created by French scenographer Richard Peduzzi, a 1:100 scale replica of the Paris Opera and surrounding region encased beneath glass flooring that visitors may walk on and move through the museum is one of the attractions. This artwork allows visitors to learn about Paris' urban planning during that period.

My tour came to a close in the Louvre Museum. Set up in 1793, it's home to the Mona Lisa and a collection of 35,000 artworks, which is divided into eight curatorial departments -- Egyptian Antiquities; Near Eastern Antiquities; Greek, Etruscan and Roman Antiquities; Islamic Art; Sculpture; Decorative Arts; Paintings; and Prints and Drawings.

As part of the Leonardo da Vinci exhibition last year, the museum developed a mobile application called Mona Lisa: Beyond The Glass, which allows visitors to view the famous portrait in 360 degrees while wearing a VR headset.

Based on a decade of research by curators Louis Frank and Vincent Delieuvin, this eight-minute VR experience takes us back in time to the original setting to see how Leonardo da Vinci used specific techniques to bring a painting of Lisa Gherardini, wife of Florentine silk merchant Francesco del Giocondo, to life.