As the exhibition's title suggests, "Xhibition In The Dark" by Chookiat Likitpunyarut showcases art installations in a dimly dark space, Chookiat, who worked as an interior designer, brand builder and design consultant in New York for almost a decade, said his first solo exhibition in Thailand is experimental art.

"The exhibition involves experiments that go beyond art. It is about perceptions towards humans, creations and data. Since the Renaissance, art, design and anything concerning people has been relevant to information collection. Information is digested and analysed for a purpose. Every decision that people make is part of an algorithmic process, but people are unaware of it," said Chookiat.

One of his inspirations for the exhibition came from the book Hard-Boiled Wonderland And The End Of The World by Murakami Haruki.

"People see beauty and form of objects related to light. I wanted viewers to see another side of beauty in a space with limited light. In Hard-Boiled Wonderland And The End Of The World, people live in a world where their shadows are cut off. As a result, the main female character does not feel love. Shadows are beautiful; they are like the souls and lives of people. The book was inspiring. Thus, I wanted to create an unusual space where viewers do not depend on light to see beauty. Also, I discovered that insignificant objects can make beautiful shadows and when viewers move their flashlights around, there will be movement of shadows," explained Chookiat. 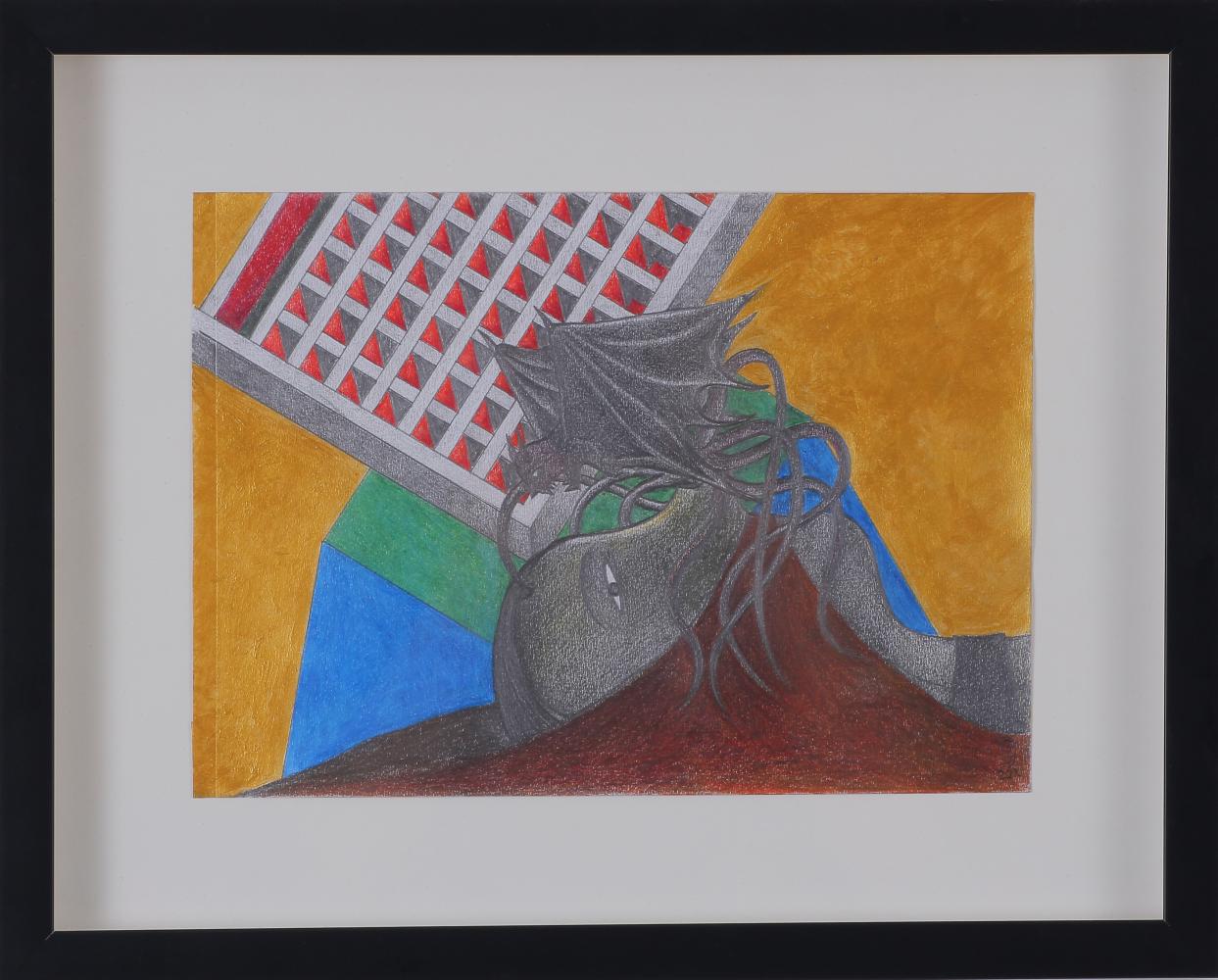 With his special interests in algorithms and databases, Chookiat created an algorithm visual that resembles some kind of fantasy creature. In his paintings, the algorithm sucks data from people as well as transmitting data to people.

"I realised the algorithm is an important issue after I read the book Algorithm To Live By Human Decision," he said.

"Every decision that people make today links their future thoughts and decisions. An algorithm can manipulate our lives and smart people can control all the algorithms. If you notice, people in my paintings are emotionless because they are controlled by algorithms."

"Xhibition In The Dark" is divided into four major themes -- Tree Of Knowledge, New York, New York, You Are What You Eat and Kinetic Space. Tree Of Knowledge is an art installation of encyclopaedias relevant to big data in art, architecture, philosophy, history, literature and politics. There is data that the artist accumulated for decades. 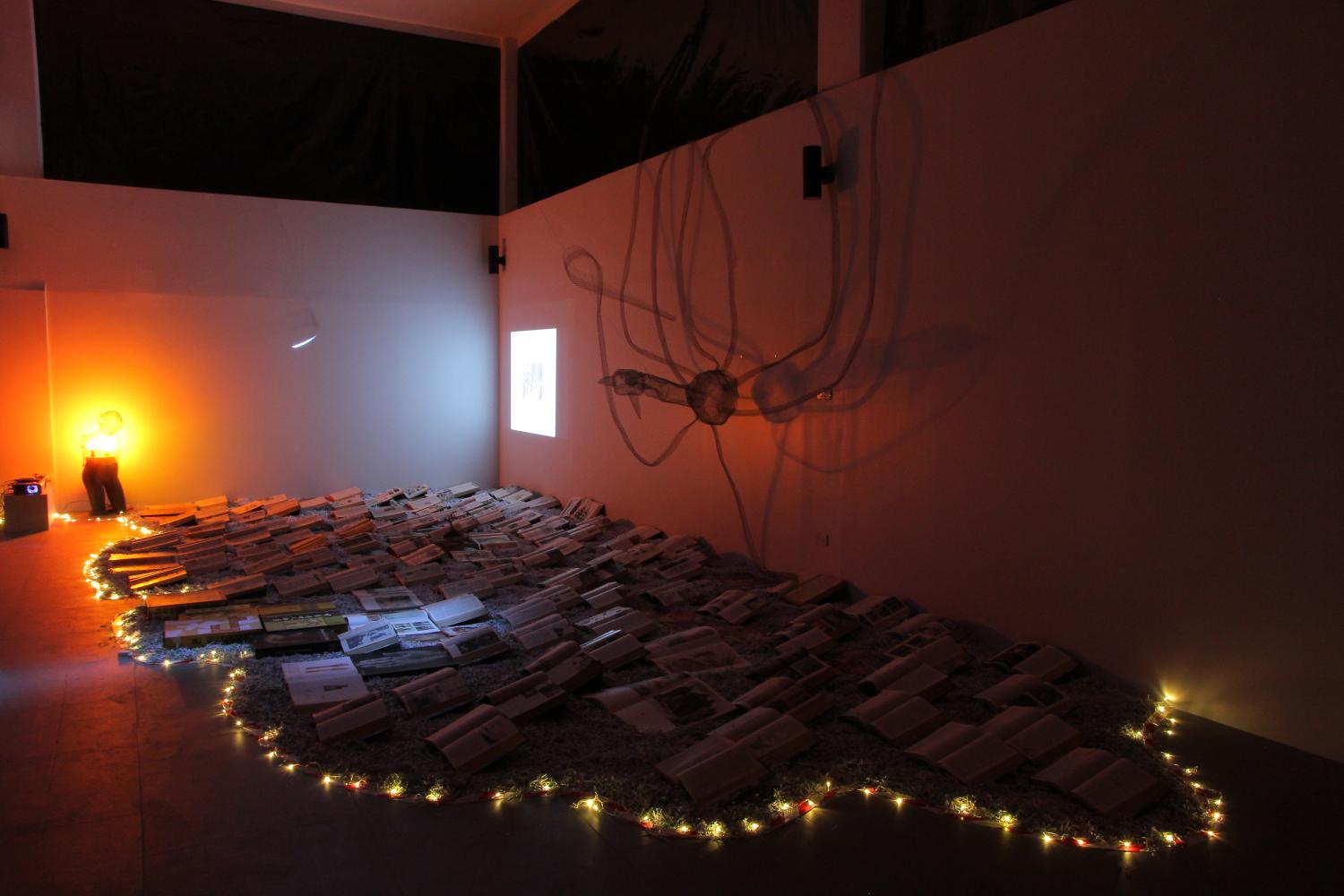 "I believe that art is knowledge and not only beauty. Each step of art is about an idea. All encyclopaedias on display were bought by my father who encouraged me to read. I discovered that facts in an encyclopaedia are linked to other issues. For example, Thomas More wrote the book Utopia and later, I got to know that Thomas More served Henry VIII of England as a counsellor. I also learned that Henry VIII was excommunicated by the Catholic church. My generation enjoys reading books, especially books regarding ideology and philosophy," said Chookiat.

New York, New York represents collectable objects that the artist acquired while he was working as an interior designer and brand builder in New York. Chookiat earned his master's degree in Interior and Environmental Design from the Pratt Institute, a top art school in New York. After that, he worked with leading design companies including Landor, Interbrand and BrandCreate and was one of the brand builders for world-class companies, including American Express, Northwest Airlines, Citibank and Fuji Bank.

"While Tree Of Knowledge features collective data, New York, New York shares my own personal data. I wanted to share what I gained with others. Objects include a book that Andy Warhol was the editor of, a poster of The Rolling Stones, a black and white New York photo collection taken by me and a poster of a Korean art exhibition. Meanwhile, a 1900s poster of a streamliner is important because it was an era when travel became easier," said Chookiat.

You Are What You Eat is an algorithm process of people's experiences, passions, education and way of life. It is an art installation resembling a dining table with one side dominated by the US and the other side by China. 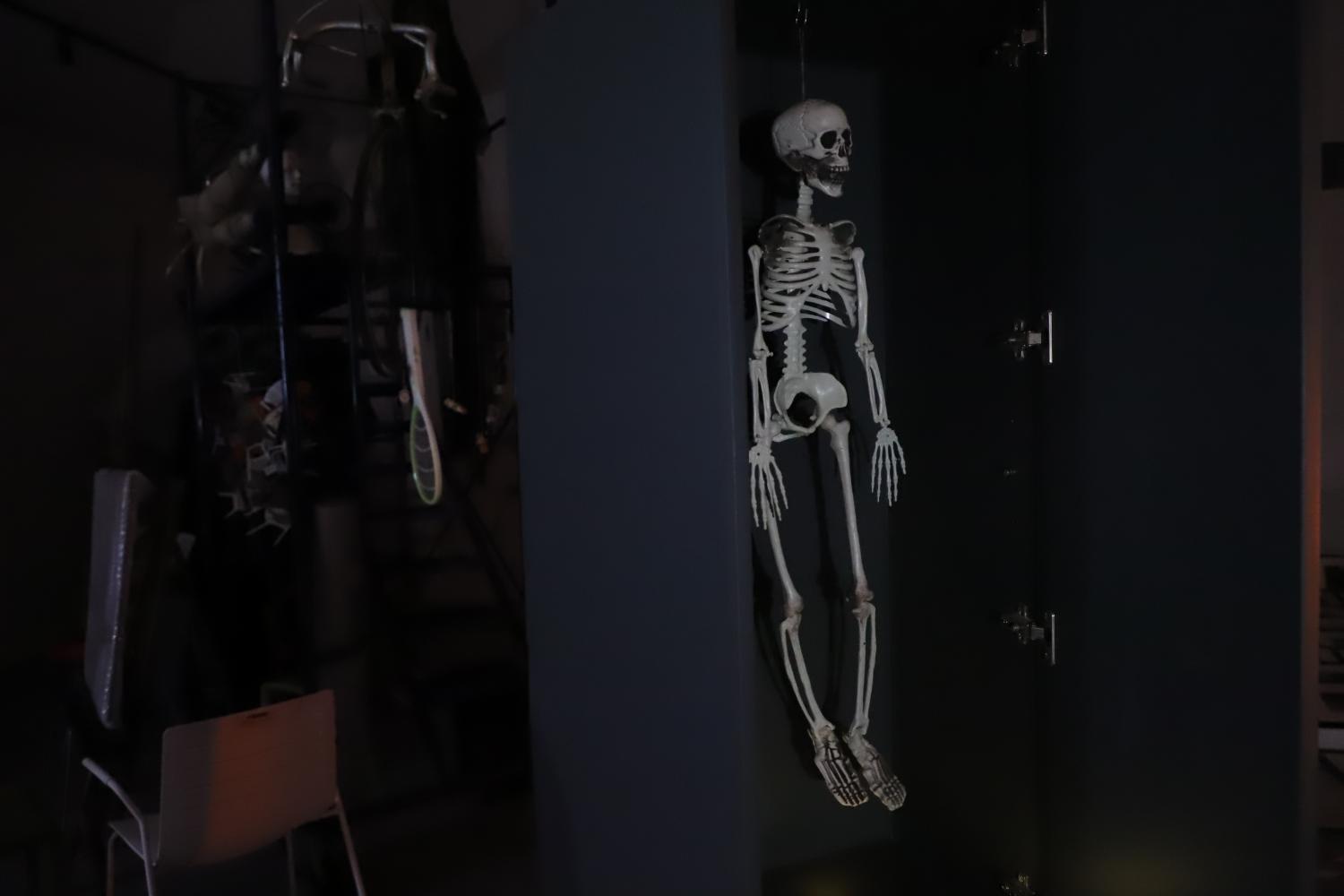 A skeleton in a closet, referring to hidden agendas. (Photos: Pornprom Satrabhaya)

"Next to the American table, there is a skeleton in the closet which refers to the United States' hidden agendas. People are what they consume or the kind of data they ingest. People also have different beliefs, but in the past, people shared many similar main ideas. However, nowadays people have deviated from the common belief and have developed more individual and different thoughts," said Chookiat.

Kinetic Space is an interactive installation that showcases the moving energy of objects or particles. Viewers can use their flashlights to create shadows and movements from selected objects by the artists.

"I have been interested in kinetic art or motion sculptures since I was a freshman at Silpakorn University. A kinetic space is created from movements of shadow and light that cause the space to move around. At the exhibition, viewers can use their flashlights to see shadows and movements of objects," he said.

In addition to the four themes, there are many paintings and illustrations that Chookiat created on different materials such as an envelope, a paper plate, a box and an advertising brochure. Moreover, his illustrations that were published in The New York Times are also showcased in this area. Chookiat said his works for The New York Times were his proudest pieces during his time in The Big Apple. 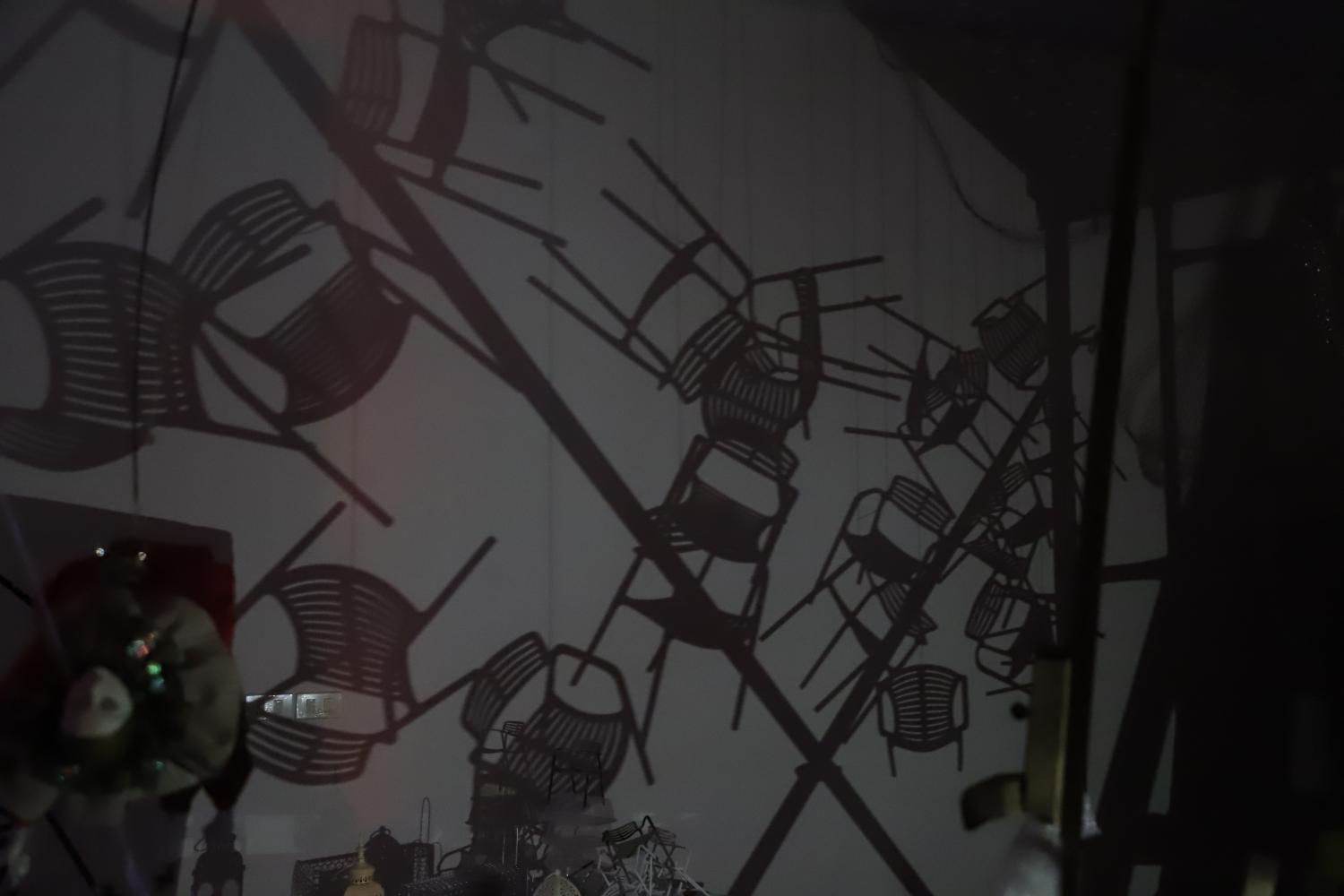 "I like to improvise paintings or illustrations, so I draw on anything that I can find. Art does not have to be luxurious. It can be anything around us. I even drew on a popcorn container. The paintings are from information or data that I have stored in my head," he said.

"For The New York Times, I sent my illustrations to the newspaper. At that time, computers had limitations in creating shapes, lines and images, so I mostly created cubism images. The New York Times purchased my work and used them to accompany the Book Review column. It was one of my proudest achievements in New York because many people want to work with The New York Times," Chookiat added.

When asked about the most challenging aspect of creating this exhibition, the artist emphasised that he wanted to present art as ideas.

"The exhibition is the experiment. I wanted to express art in a different way and show that it is not about skill only. In Thailand, most people believe that skill is a priority, but art actually is about ideas. I also believe that people have their own talents. In the exhibition, I told a custodian to take some nicely designed chairs and pile them up to a certain height -- the result looked great. When I was in the countryside, I saw people who had never been to art schools arrange cans of baby powder to look like pop art," concluded Chookiat. 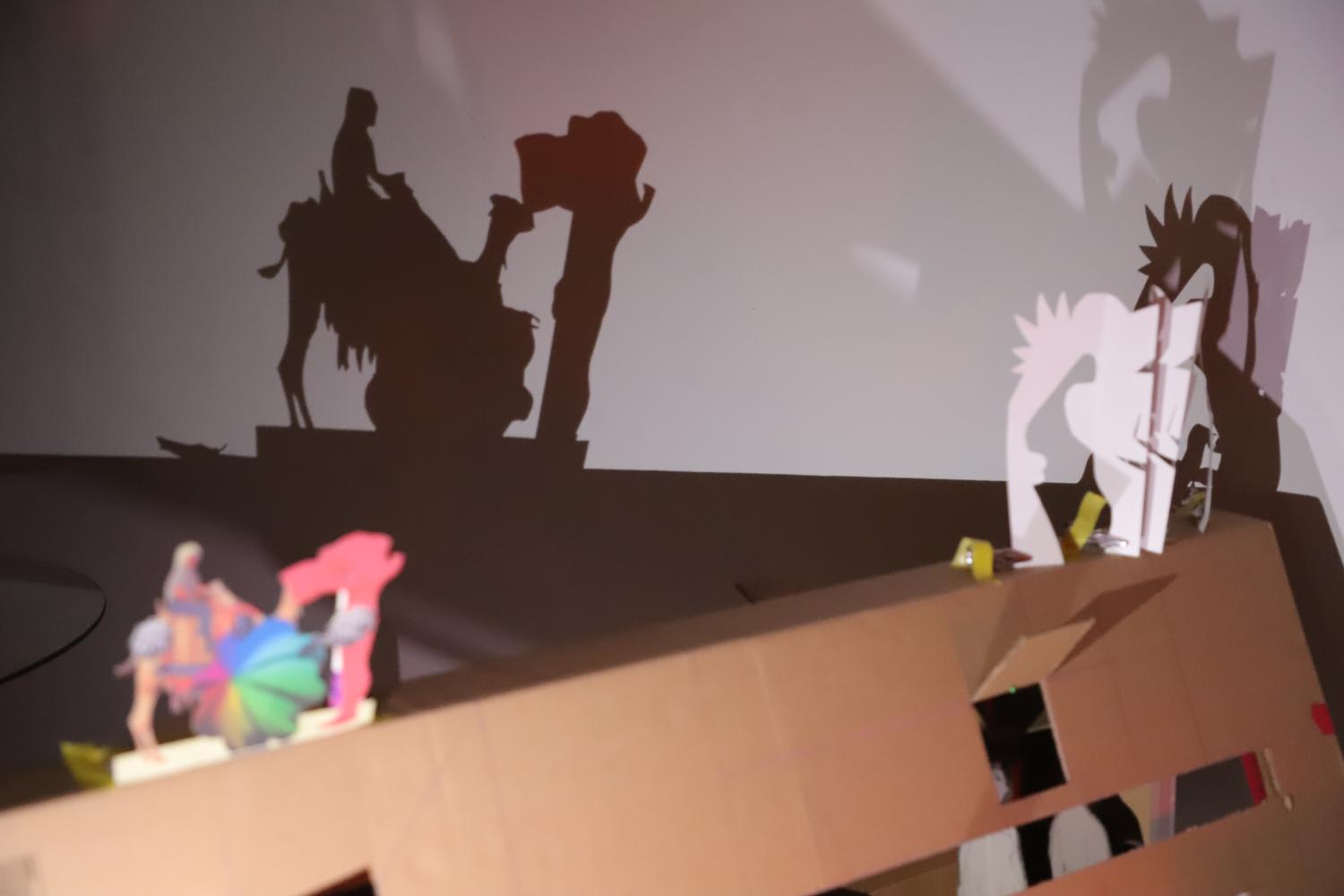 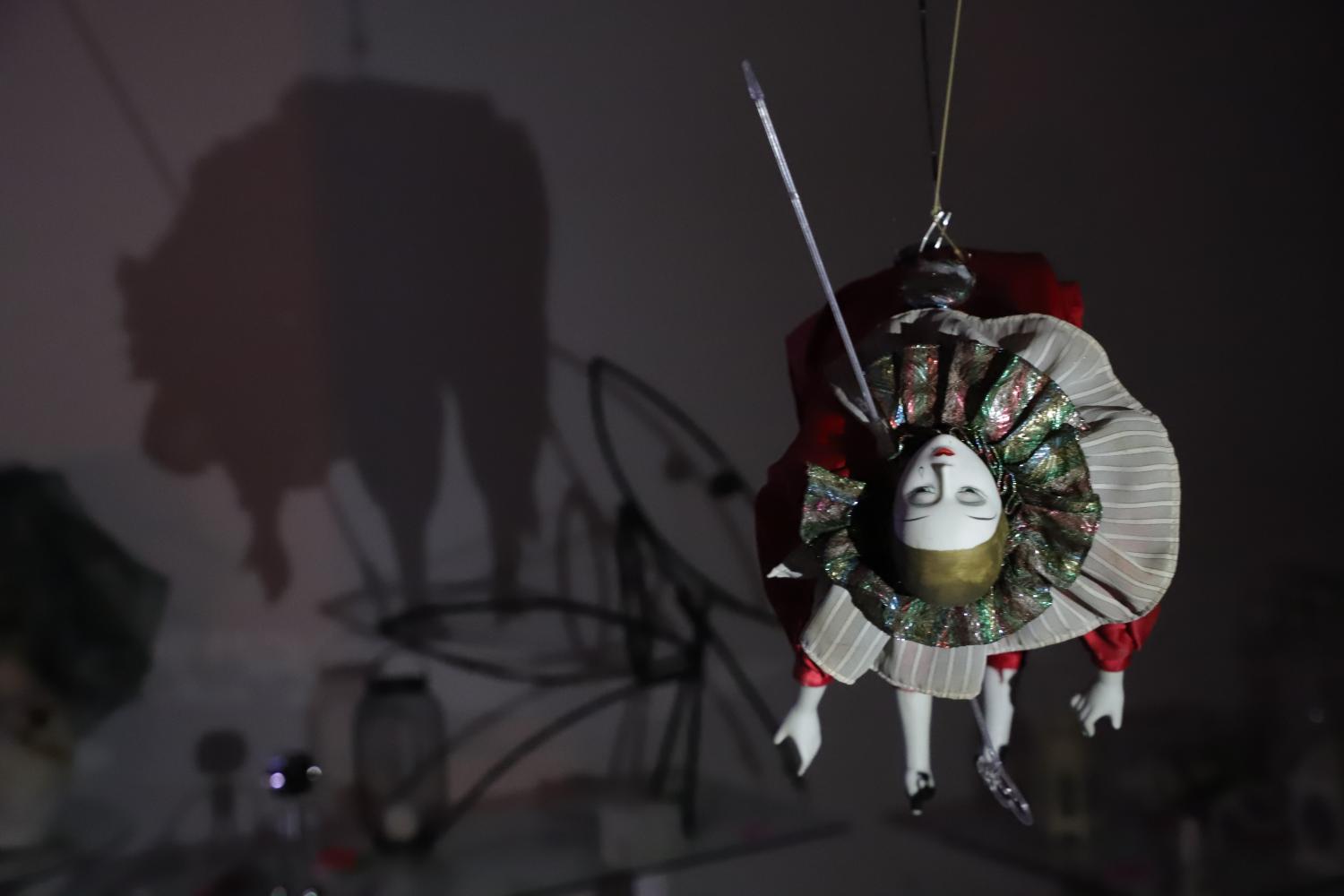 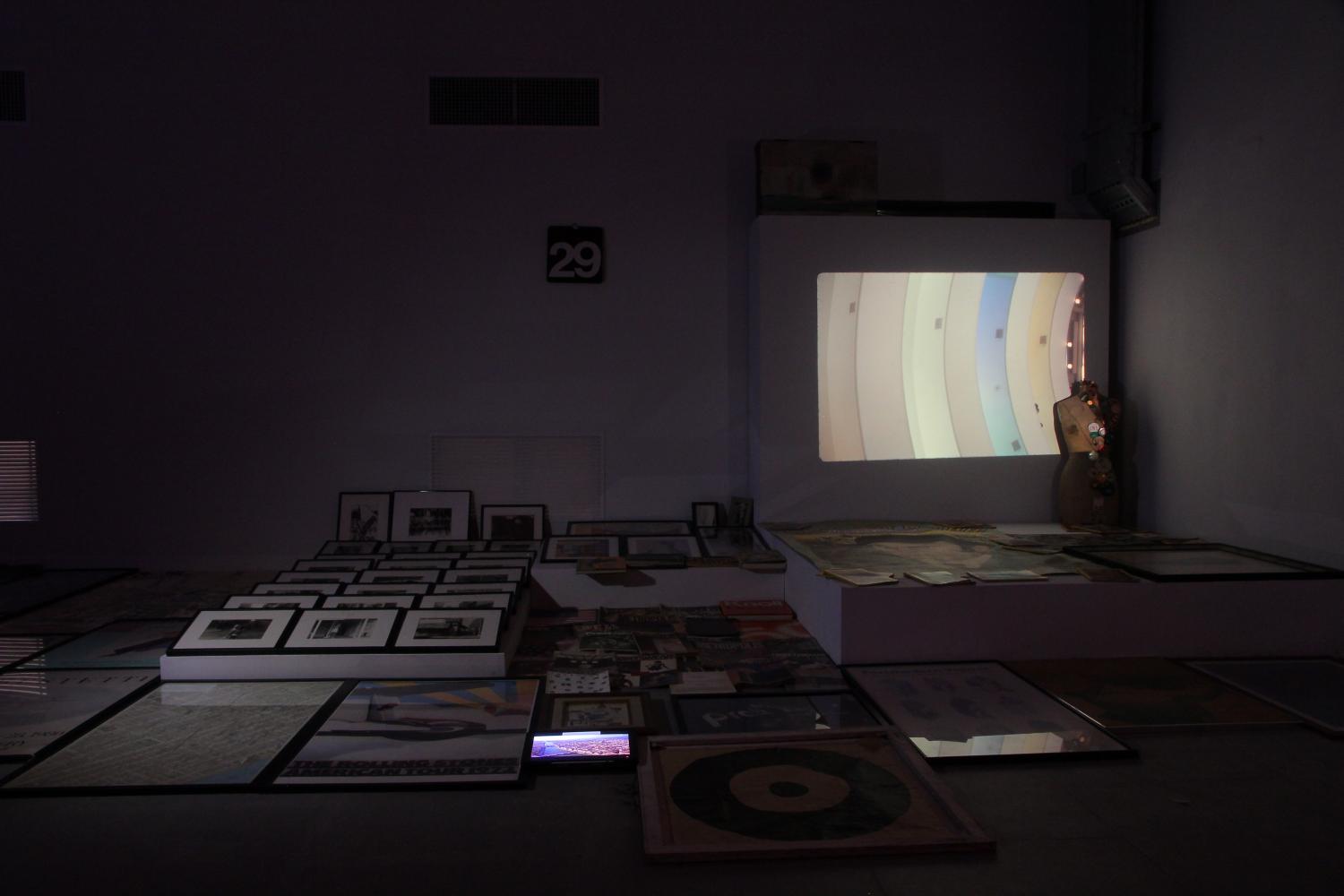 New York, New York represents collectable objects that the artist acquired when he was in New York. 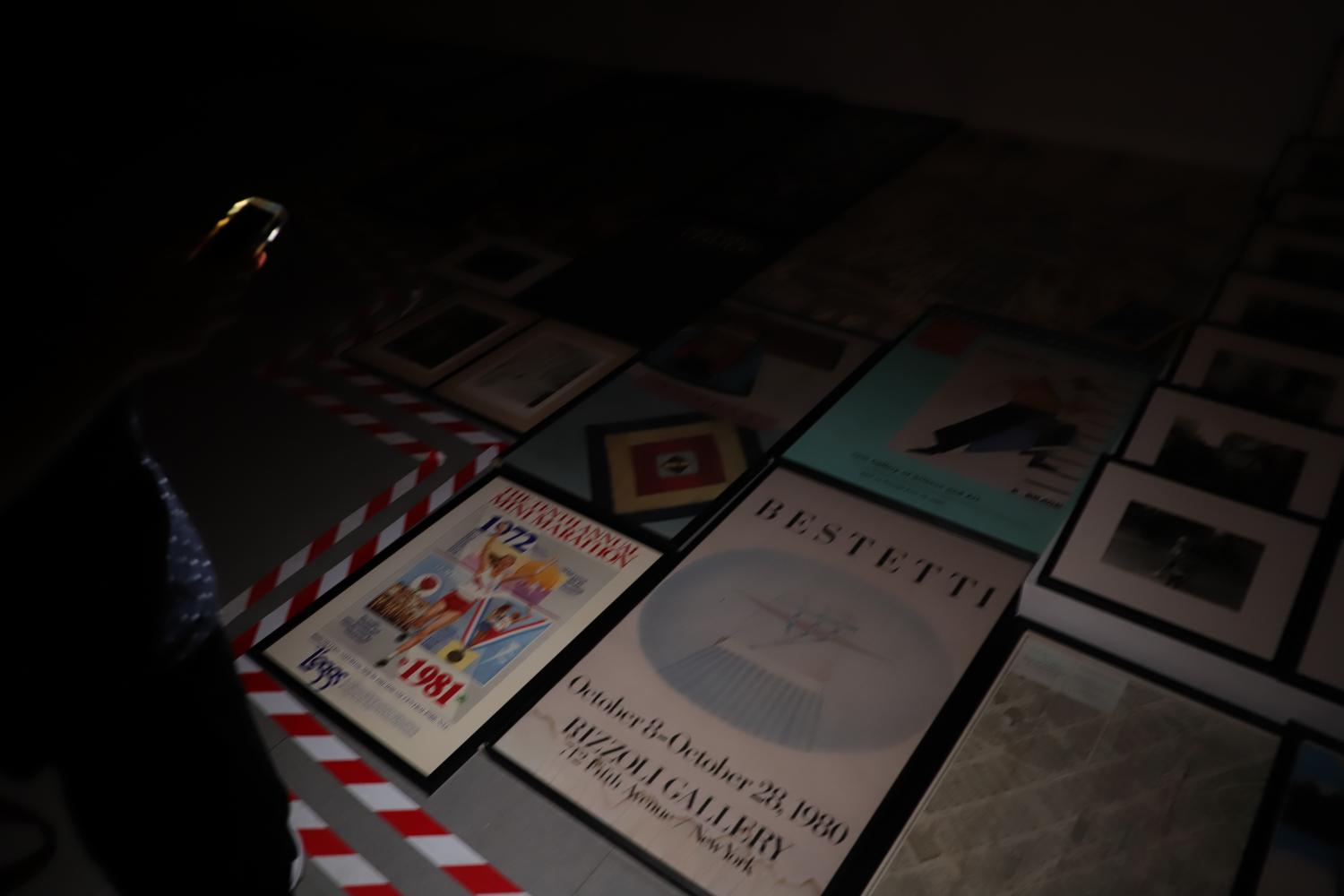 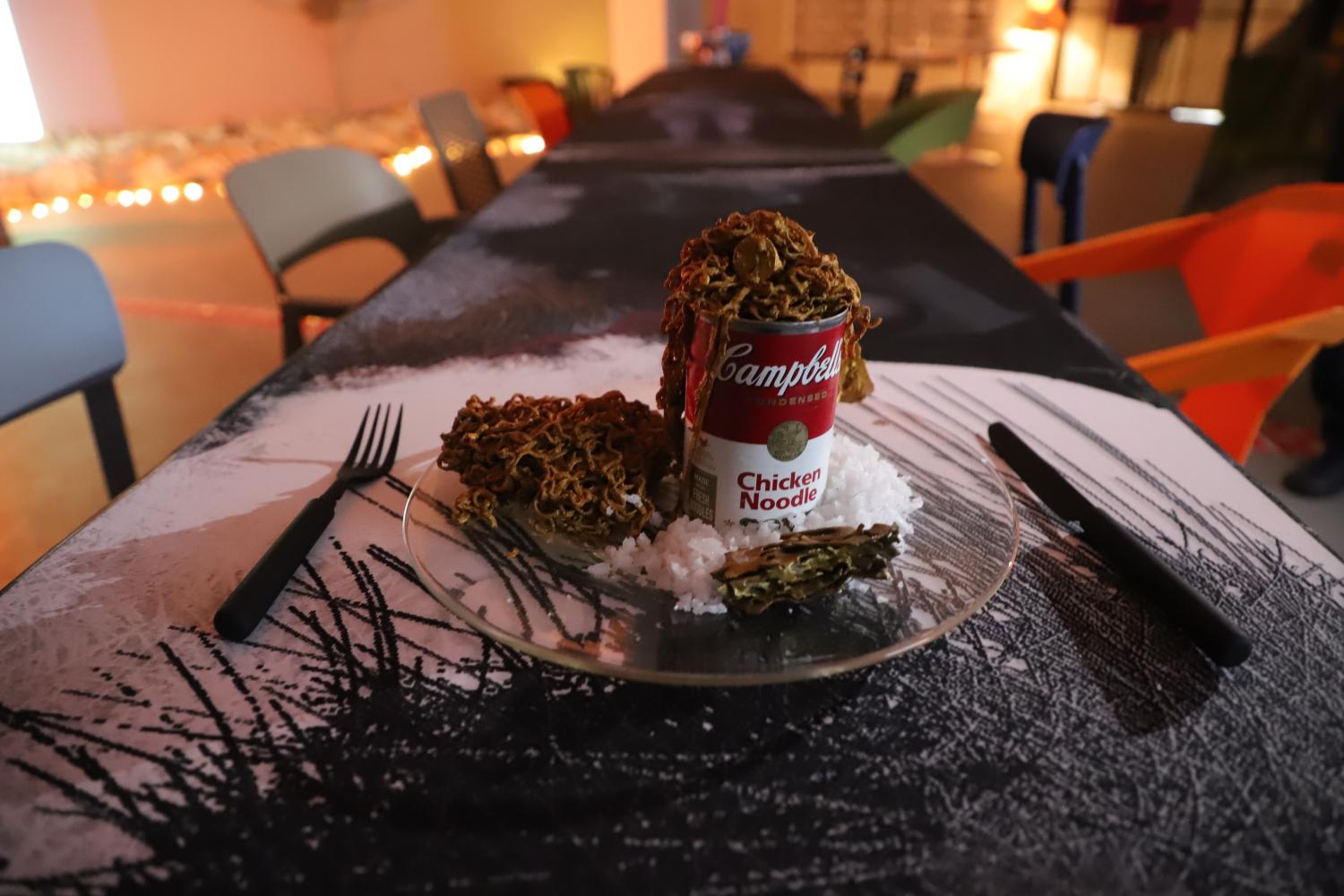 You Are What You Eat is an art installation resembling a dining table. (Photo: Pornprom Satrabhaya) 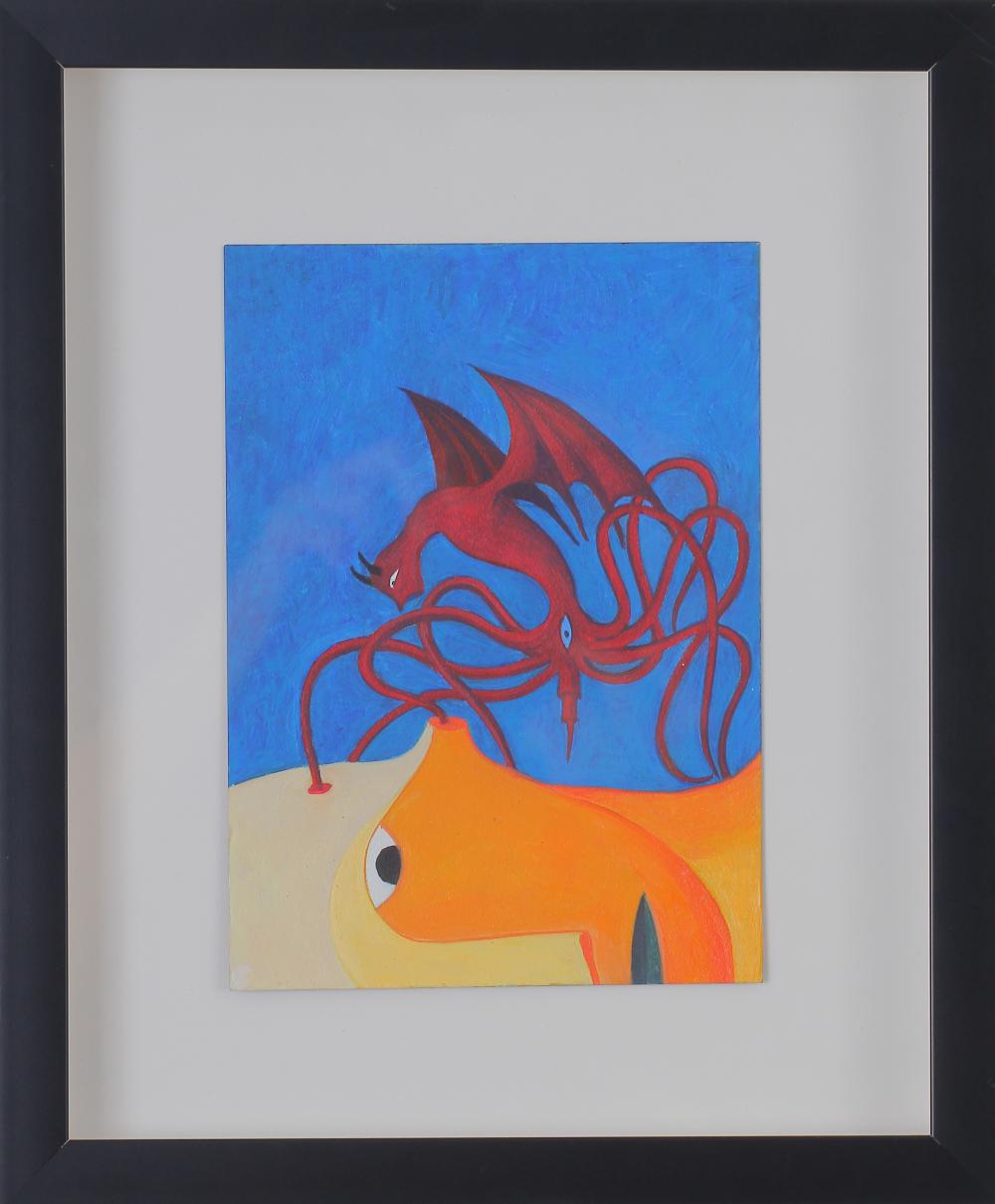