It's all about perspectives
Life
Arts & Entertainment

It's all about perspectives

It is difficult to overcome something you believe is your weakness. Wisut Ponnimit, a cartoonist, animator, artist and musician who is known for his cheerful and cute girl character Mamuang (translated as mango), is not comfortable painting because he thinks he is not good at it.

When Wisut was a university student, an art lecturer criticised his paintings and said he should not work in the field. His paintings were displayed on a bulletin board as a bad example. There was a moment when Wisut wanted to quit studying, but thanks to his mother who encouraged him to continue, he decided to put his energy into drawing cartoons and playing musical instruments.

From 2003 to 2005, Wisut was in Japan to study Japanese. Due to his remarkable cartoon characters, he got an opportunity to work for Japanese publishing companies such as Shinchosa and Shogakukan. His manga series Blanco was published in the Japanese magazine Ikki Comics between 2007 and 2010. His character Mamuang and ongoing series HeSheIt are popular both in Thailand and Japan.

Recently, Wisut challenged himself to paint for his solo exhibition "Uoy Ma I" -- read as "I Am You" -- on display at River City Bangkok. The exhibition features Mamuang in paintings, illustrations and sculptures. Wisut admitted he was terrified to paint, but he tried to overcome his fear and eventually created a huge painting of Mamuang.

Life spoke to Wisut about the "Uoy Ma I" concept, his fear of painting, and his experience in Japan. 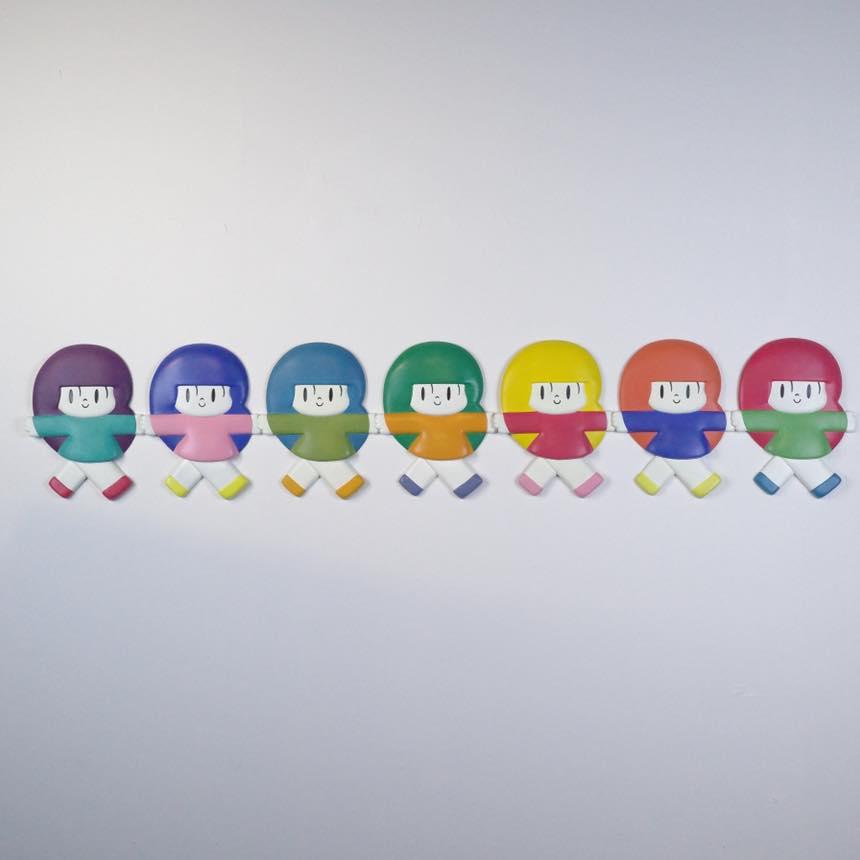 How did you stay positive after being criticised by an art lecturer?

I was about to quit, but my mother had me consult an agency to study abroad. However, the process was complicated. I could not immediately leave, so my mother encouraged me to finish studying in Thailand. I then decided to focus my energy on activities that were not judged or graded by a lecturer such as drawing cartoons and playing musical instruments. By doing this, I received positive feedback.

How did you come up with the exhibition for your animation HeSheIt in Japan?

I saw cafés with leaflets created by indie creators. These leaflets advertised various activities such as stuffed toy workshops, gardening workshops and music performances. I also decided to create leaflets and asked the staff if I could leave them there. Each leaflet included information about an episode of my comic HeSheIt, the admission fee, the date, and the location of my animation exhibition. Then I rented a restaurant in Kyoto to exhibit the animation. Ninety people paid ¥5,000 each to attend my first exhibition.

How did you come up with the idea of performing on piano or a guitar while screening an animation?

After holding exhibitions a couple of times, I wanted to screen a new episode of my animation in Tokyo, but I was not good at it. So I decided to show cartoons as slides and tried to record background music on a computer, but it was not successful. Fortunately, there was a piano at the venue, so I decided to play that while screening the last episode of the animation. The audience responded that they enjoyed it, so I now play a musical instrument while screening the animation.

I do not know exactly, but if I had to guess, I think Japanese manga artists are good at drawing and their works are perfect and neat, but my characters do not have perfect lines which may give Japanese readers a more relaxed feeling. My cartoon characters are not cool or chic, but they give readers different vibes and feelings from the usual Japanese manga style. 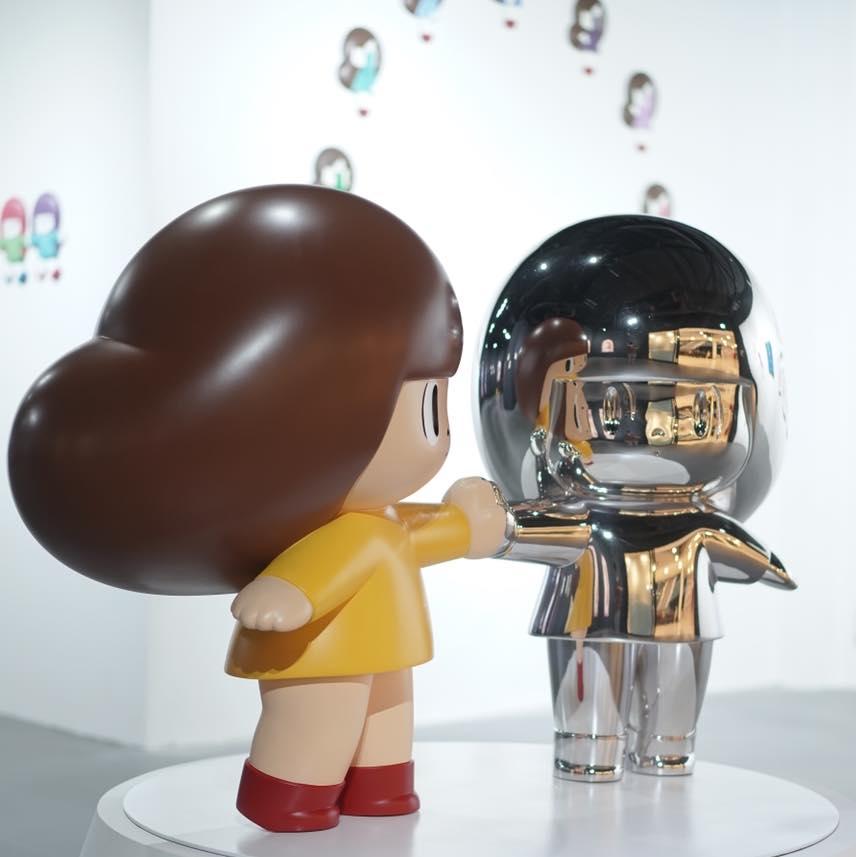 A sculpture at 'Uoy Ma I'. Photos © River City Bangkok

Is there any difference between working in Japan and Thailand?

My experience in Japan involved working with small brands, independent artists and galleries, but in Thailand, I've worked with bigger brands. I am not egotistic. If a client tells me to change my work, I do not have a problem with it. In Japan, I created a CD cover that featured a drawing of a man playing the guitar. His little finger was hidden behind the guitar and I was told to complete the image. If not, an association of disabled people may file a complaint. I was surprised to hear that but did not mind re-doing it.

Was there any pressure working in Japan?

There was no pressure at work because I did not do anything that I could not handle. I was glad to have Japanese people read my work. The most difficult thing in Japan for me was to get an internet connection. A man who came to connect the internet spoke in formal language. When I asked him to explain what he meant, he got mad at me. He tried to hide his anger, but I saw his expression while looking down to see a document. His expression quickly changed when I looked up. I was scared of his pretentiousness.

What is the concept of the exhibition 'Uoy Ma I'?

Despite living in the same world, people have different perspectives. While some people feel miserable, some feel fine. "Uoy Ma I" means "I Am You", or I am the one that you see. It is like looking in a mirror. I interpreted the concept into a visual by using a mirror and the reflection in it. 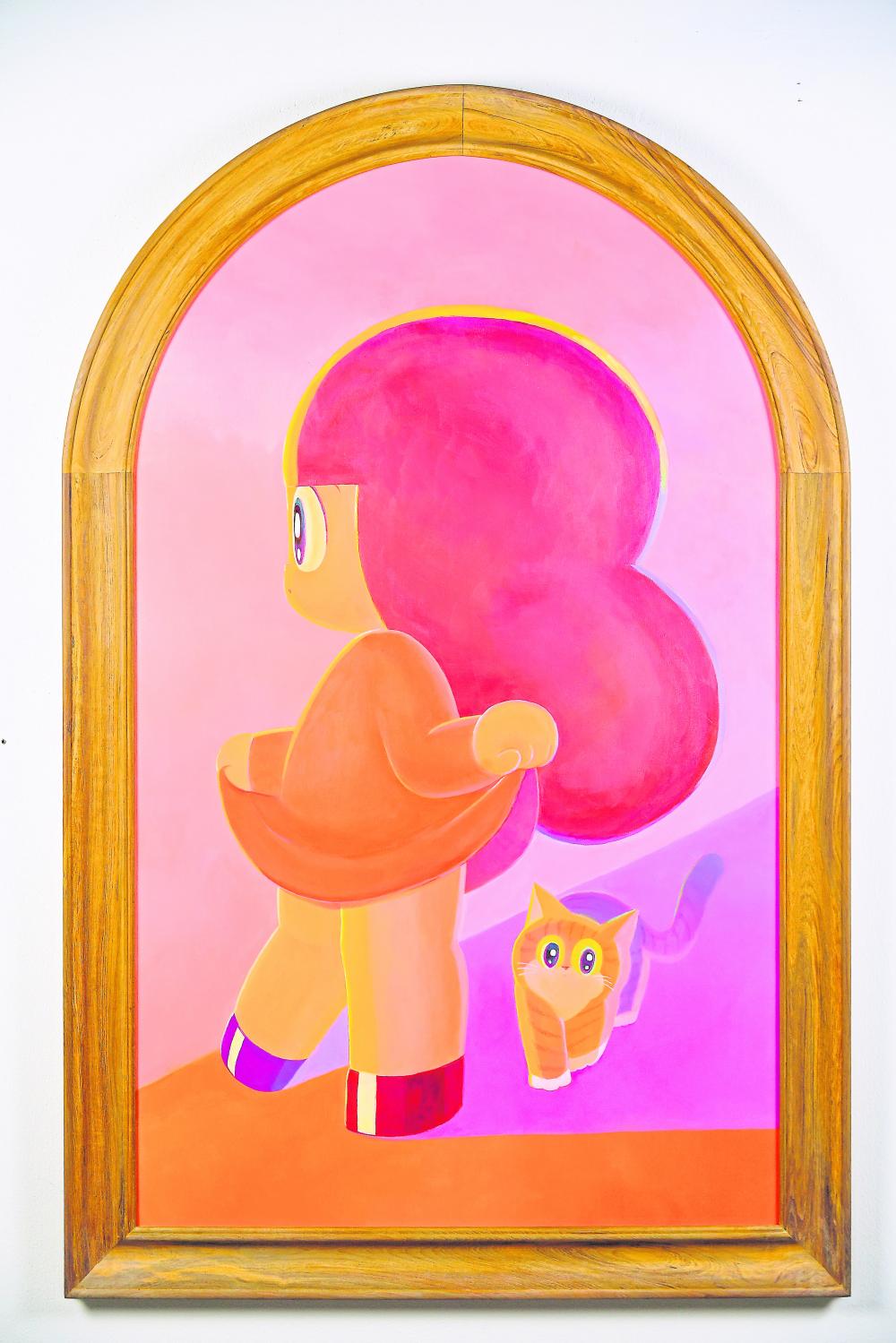 Were there any challenges working on this exhibition?

The challenge was to create paintings. It has been 15 years since I did a large painting for an exhibition. I was terrified when I worked on it because it reminded me of the criticism of that university lecturer. Nonetheless, I tried to face my fear as I did not want to run away anymore. After the paintings were completed, I felt better.

What is the best thing about being a cartoonist?

A Japanese reader who waited in line for over an hour for my autograph told me that her mother who was hospitalised recovered after reading a book featuring Mamuang. Also, many people approached me and thanked me. I guess Mamuang helped them feel better.

What message do you have for aspiring artists who may have experienced negative comments as you did?

When I performed in a concert at school, I sometimes saw illustrations or paintings on the bulletin board. Next to grade A drawings, there were grade F drawings on display to humiliate students. I really want to tell the students of the grade F drawing don't believe in the judgement of only one person and do not let it hurt you or destroy your dream. Life will be more than this.

What is your advice for young people who want to work abroad?

There is no formula for success. New generations should be confident and have fun doing things. They should try to do whatever they want to do as long as it does not get them into trouble.