At 'Paradise Lost', a group of creators present Bangkok from a new angle covering the past to present while imagining its future

Most people believe planting trees is good for the environment, but in some cases, it can be a threat. At the exhibition "Paradise Lost", a video interview with botanist Assoc Prof Kitichate Sridith helps visitors understand that forests cannot be built.

"Assoc Prof Kitichate says that people are part of the ecosystem. A forest cannot be built since it has its own evolution. What people grow is man-made and not natural. For example, some people grow plants in a mudflat in a mangrove where scallops and cockles live but these plants destroy the ecosystem. A forest must have a diverse range of trees. Thus, when people plant a pine forest, birds do not make their nests there and when there is a wildfire in a pine-dominated forest, it is difficult to extinguish," said guest curator Sanitas Pradittasnee.

On view now at the Bangkok Art and Culture Centre (BACC), "Paradise Lost" displays 12 exhibitions created by 17 creators and 22 children. The retrospective is divided into three main sections -- "Step Back And Revisit The Past", "Urban Green Project" and "Redefine Bangkok". "Paradise Lost" refers to Bangkok, or Krung Thep, which means City of Angels and conveys how it, or paradise, has changed from its past to present and how it may change in the future. 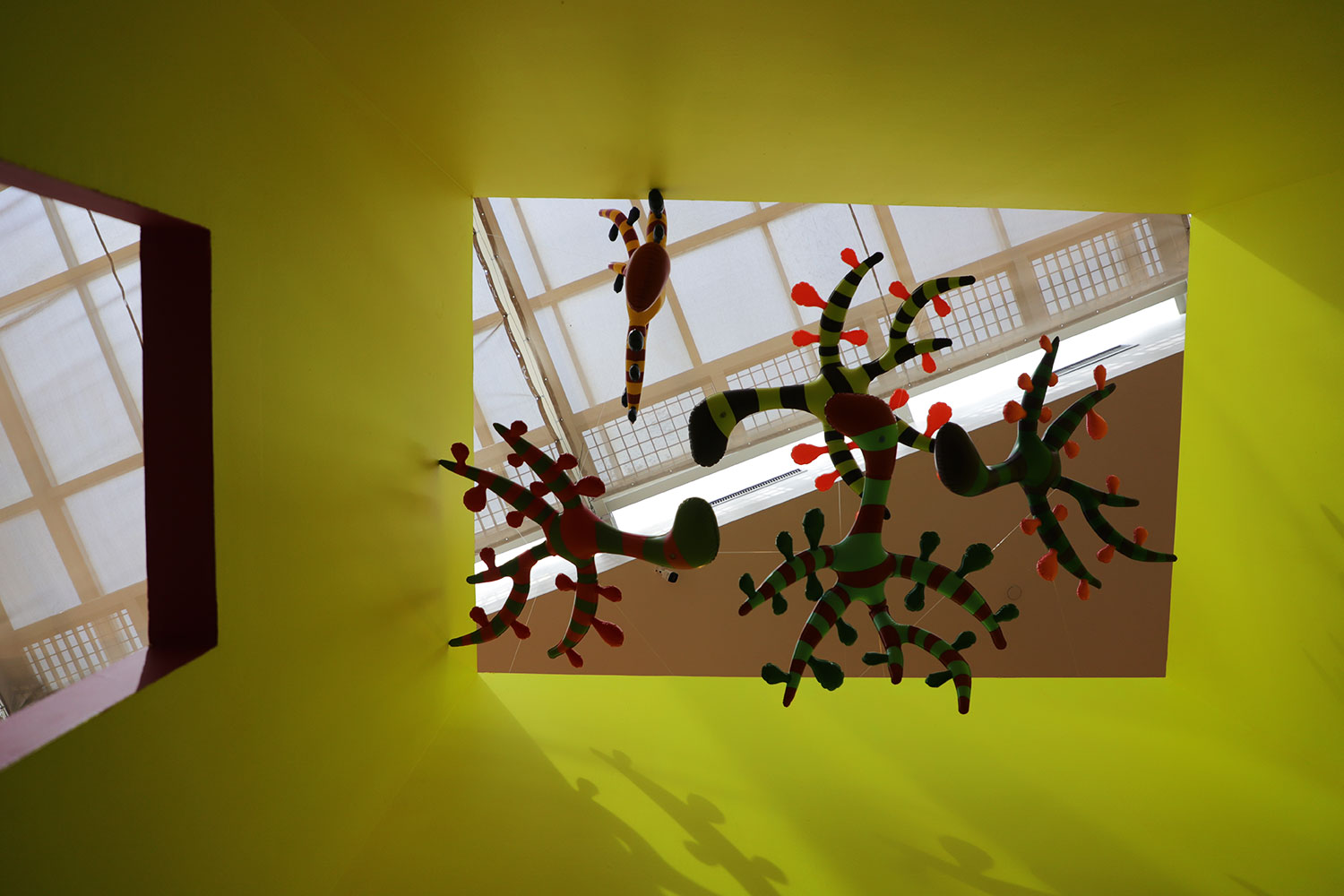 "'Paradise Lost' displays relationships between the city and nature. While man-made construction in the city has been promoted, nature has been forgotten. Bangkok has luxurious and comfortable buildings, but they became empty during the Covid-19 pandemic. People adjusted to the pandemic and PM2.5 by wearing masks. In the next 100 years, will people have to wear space helmets? We want viewers to think how we can strike a balance between man-made materials and nature," said Sanitas.

"As curators, we are interested in the diversity of people. In order to show the city from different angles, we chose creators from different professions, including a historian, a botanist, landscape architects, contemporary artists, a performance artist, a graphic designer and a ceramicist," added co-curator, Narongsak Nikhet.

The video interview with botanist Assoc Prof Kitichate is titled Nature of The State Of Ultimate Truth (No Embellishment). The interview is informative and provides knowledge about the ecosystem many visitors may not know about. The botanist said areas named Bang such as Bangkok, Bangkrajao or Bangpo are areas that regularly flood.

"Assoc Prof Kitichate explained that people used to grow rice in Bangkok because it is a wet area. However, because of the construction of dams and houses, people face floods. He also said the name of the area suggested native plants found there. For example, kok in Bangkok refers to wild olive. Assoc Prof Kitichate mentions that groundwater should be allowed to flow. People cannot control nature. Even though people have built flood protection structures around the city, flooding still occurs," said Narongsak. 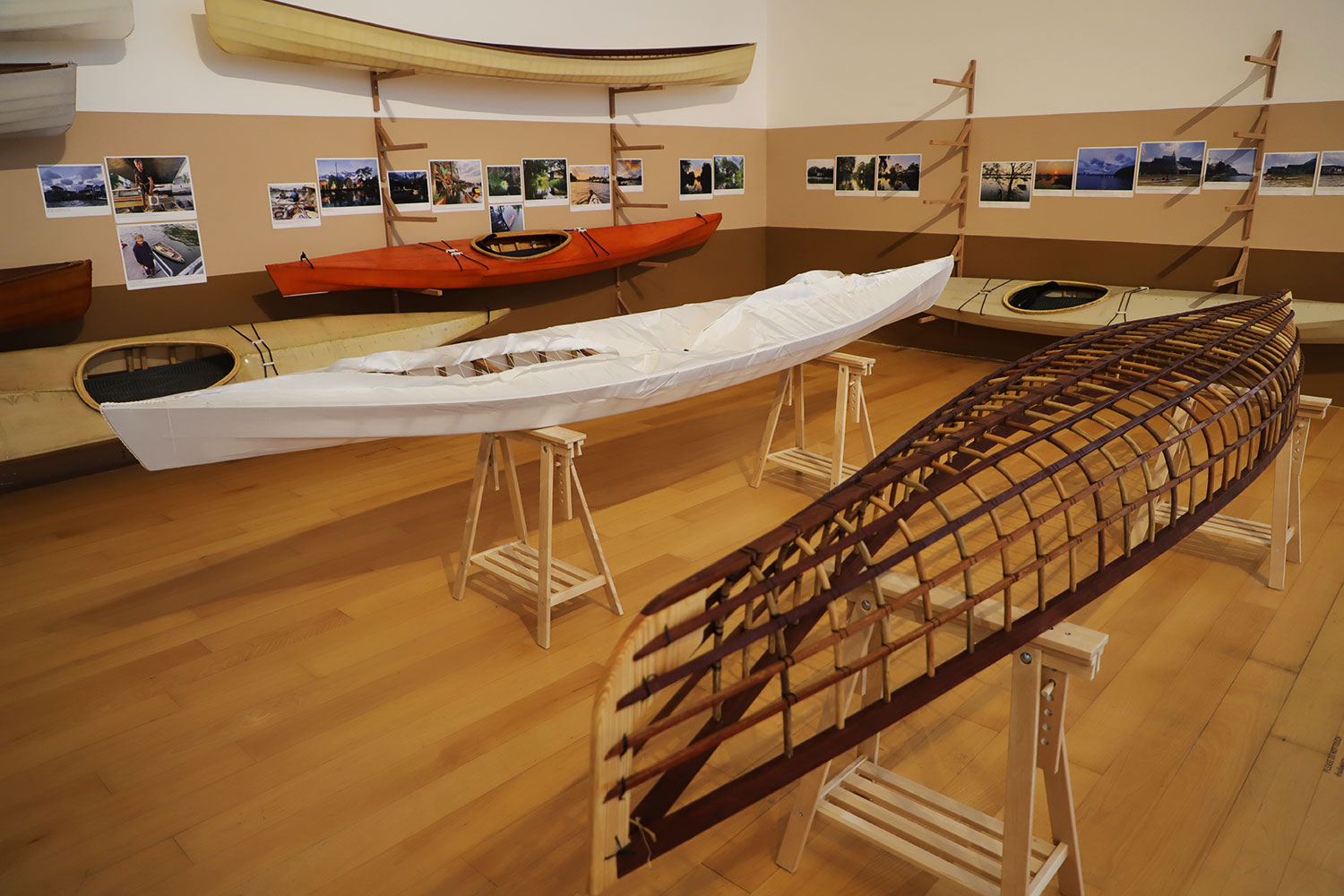 Documenting The Exploration Of Bangkok’s Waterways And Its Vicinities by Wit Pimkanchanapong.

"Assoc Prof Kitichate emphasises water resources. He told the video crew to film woodland edges to show that when we destroy the connection between a woodland edge and water resource, the ecosystem is ruined. While filming, we found desolate forests connected to Phra Khranong Canal," Sanitas added.

At this point, people may worry that we should not plant trees because they can destroy the ecosystem. As a matter of fact, instead of growing alien trees, people should plant native or local trees since they thrive in the area. Architect and university lecturer Chunlaporn Nuntapanich selected 60 local trees which Bangkokians may not be familiar with, such as ton satue (Crudia chrysantha), ton sarapee (Mammea siamensis) and ton maglea (ebony tree). Some of the trees on his list are from poems written by Sunthorn Phu. The display provides the details of each tree.

"Chunlaporn wants people to learn about trees and if they want to grow them to help nature, they should be interested in local trees. Chunlaporn is an architect, so he understands that some trees can cause problems to owners such as too many falling leaves or tree roots damaging construction. On the list of 60 plants, there are evergreen trees and their roots do not damage the foundation. Trees like ton pru and makamkai are good at capturing dust in the air," said Narongsak. 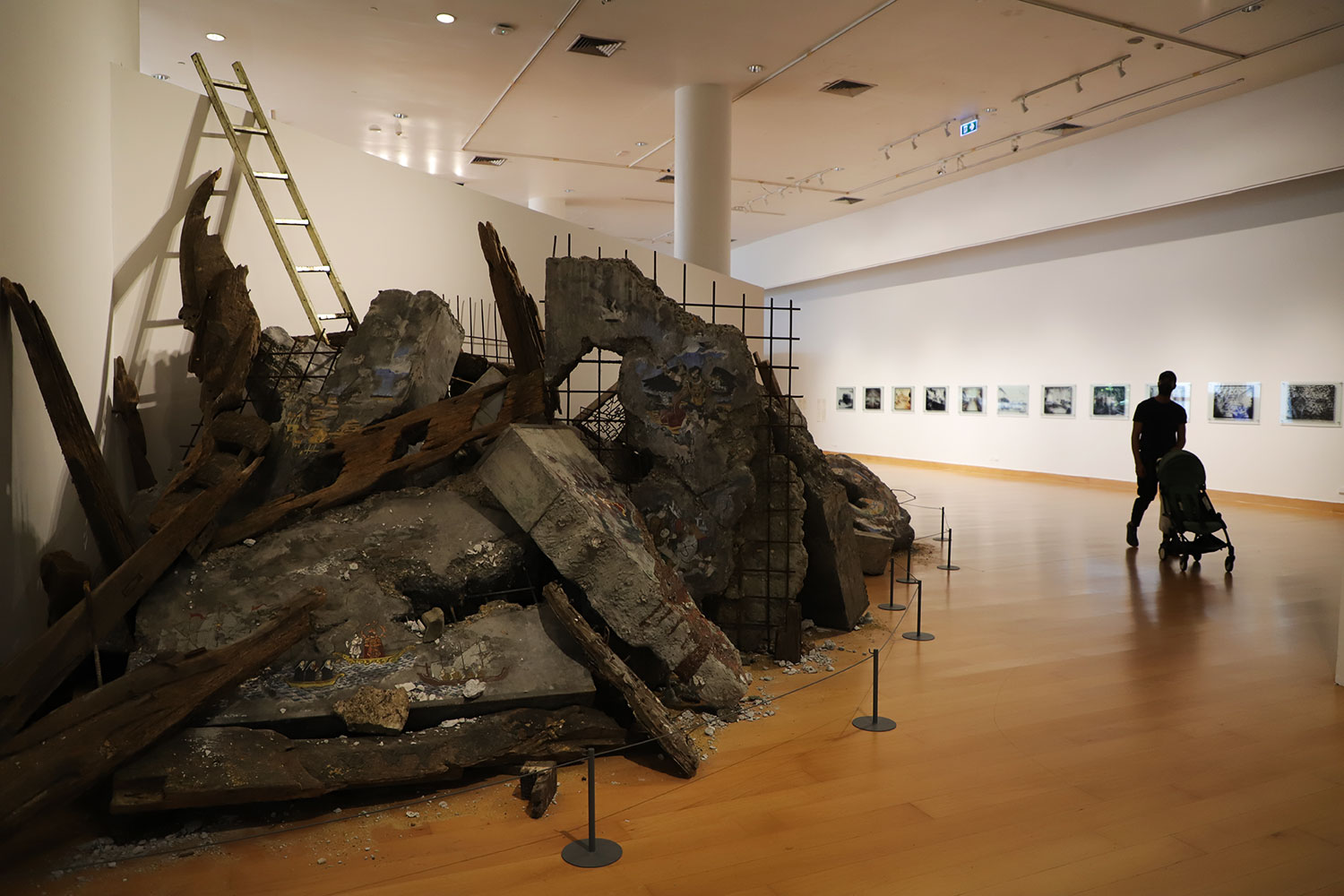 Sediments Of Time by Pannaphan Yodmanee.

Sanitas said the World Health Organization recommends there should be 9m² of urban green space per person, but Bangkok has only 6.9m² per person. In order to introduce green projects, the curators collected information on green projects from professionals such as Big Trees, we!park and the Urban Design and Development Center as well as arranged an open call for the public. Narongsak said the blue wall of the Urban Green Project at "Paraide Lost" is full of photos and information and has received positive feedback from viewers.

"I saw many young people read the text at the exhibition and asked their friends to visit those projects or parks. Although they wanted to visit to post photos on their Instagram, I am fine with it. My duty is only to provide them information," Narongsak said.

The final section "Redefine Bangkok" presents the capital from different points of view. Exploration Of Bangkok's Waterways And Its Vicinities by contemporary artist Wit Pimkanchanapong takes viewers around Bangkok by boats. On display are canoes, kayaks, a canal map and photos of Wit's first boat as well as many photos that Wit took when he travelled by boat. 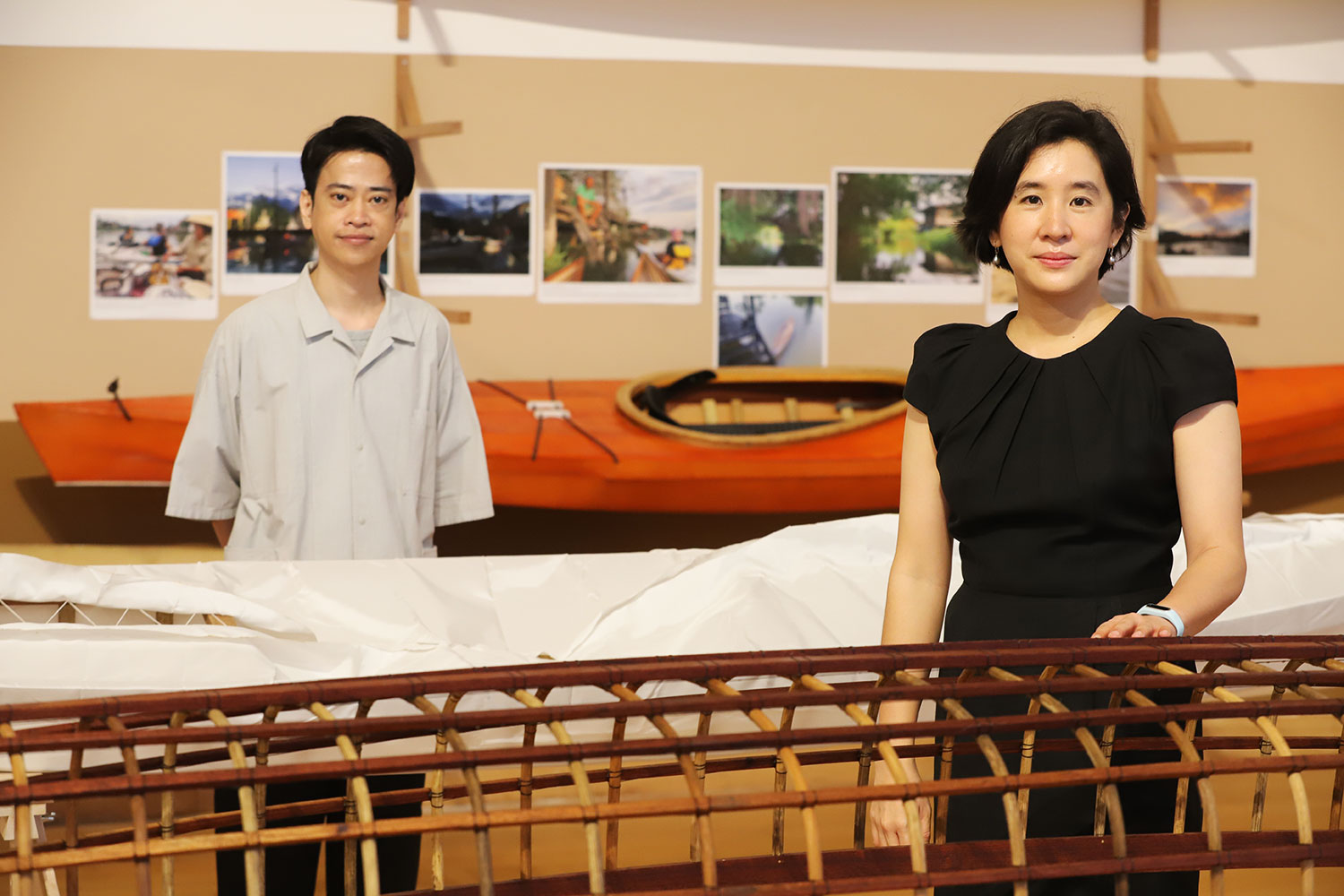 "Wit started to travel by boat after the floods in Bangkok in 2011. He made his first boat from a plastic tub. The artist has experienced a different side of Bangkok which is not so far from the road. He discovered serene, natural areas and different sides of the Saen Saep Canal and Phra Khanong Canal which are cleaner than what we are used to. It is another angle of Bangkok," said Sanitas.

The graphic designer Santi Lawrachawee explored Bangkok through his work Nice To Meet You, which includes wall paintings, drawings and a video. Santi walked from his house on Rama III Road to BACC on Rama I Road. On his way, he talked to strangers and created drawings from their names and characters.

"Bangkokians do not pay much attention to one another. Santi had to use several tactics while talking to strangers because they were wary and cautious. Santi talked to various people, including a street sweeper, a motorcycle taxi rider and a street vendor. He said around 60% of the people he talked to were labourers from other countries. Bangkok is a diverse city," said Narongsak.

Children are the future of the city. Thus, art lecturer and artist Jedsada Tangtrakulwong created a space for 22 children to express themselves freely by using natural colours of their choices to create their own drawings and paintings. The display was arranged and designed by children. Jedsada created colourful balloons inspired by the drawing of a child to emphasise that children are the key to the city.

As the co-curator of the exhibition, Narongsak hopes that viewers will have fun and relax at "Paradise Lost". He also hopes that the exhibition can trigger viewers to think about issues. Sanitas hopes that in the future, Bangkok will be a place to relax and rest minds.

"I hope Bangkok will become a city that provides quality of life to people, so Bangkokians do not have to escape the city when they have time to do so. Nature is an important part that can make people happy. If Bangkokians understand the ecosystem and can make the city more sustainable, people may not want to escape," concluded Sanitas.