To promote the diversity found Down Under, 33 artists are showcasing their work in Bangkok

Australia is known for diversity and multiculturism. Through comics, 33 Australian artists express their creativity and identity at the exhibition titled "Australian Comics – Promoting Culture Through Visual Story Telling", which is on view at the Bangkok Art and Culture Centre (BACC). In collaboration with the Australian embassy and curator Jakub Mazerant of IllustrateYourLife, this series of retrospectives showcases the best and most original comic art from Down Under.

"In this exhibition, the artists are diverse. We have men, women, LGBTI and indigenous artists. It is important to make the exhibition accessible and open to everyone. Thankfully, we were able to have 33 artists showcase diversity. Also, the exhibition has at least one artist to represent every state of Australia. There is a map of Australia in the exhibition for Thai viewers, so they can learn where the states are," said Jakub, the exhibition curator.

"Regarding diversity, it is easy to assume that comics are a masculine game, but my favourites are created by women, including Claudia Chinyere Akole, Madeleine Karutz and Tatiana Davidson. Claudia released a comic in 2020 about the Black Lives Matter movement while Madeleine created comics about history which is informative and funny. Tatiana is known for horror comics which are gruesome and frightening," freelance illustrator and cartoonist Ben Mitchell added. 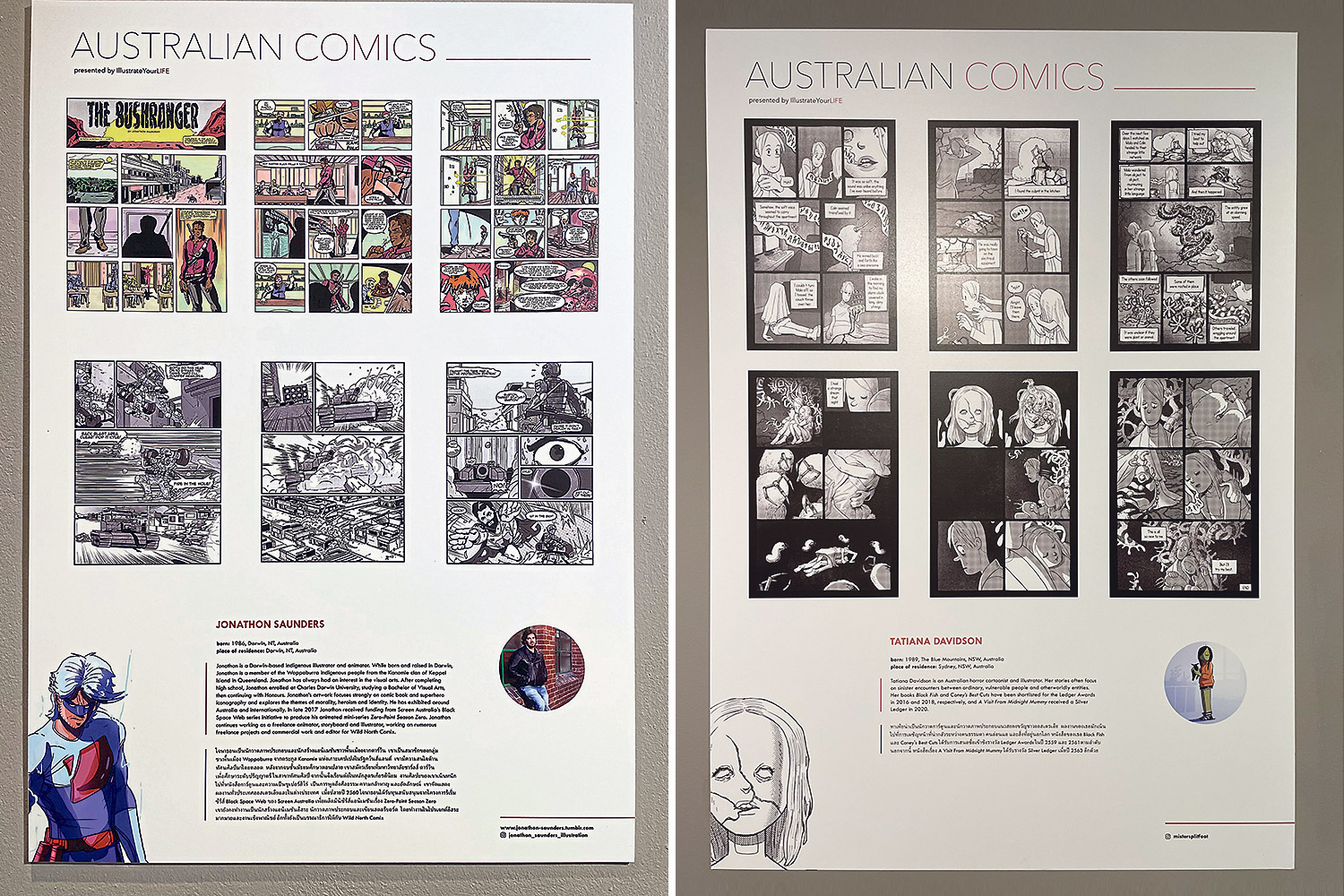 The first edition of "Australian Comics" was launched in 2018 as part of the "International Festival Of Comics And Games" in Poland -- a prominent comic festival in Central and Eastern Europe. In early 2020, the second edition was organised in Berlin, Germany, in co-operation with the Australian embassy. The current exhibition in Thailand is the third edition. Jakub, who created the event, said it was designed to promote Australian artists and give them a chance to reach international audiences.

"I am originally from Poland and moved to Australia in 2007. I started thinking about ways that I could help artists in Australia promote their art outside the country because for me being from overseas, I felt the Australian comic scene was not appreciated enough," explained Jakub.

Since this is the first time that "Australian Comics" is being officially showcased in Thailand, Jakub said it is challenging.

"This is the first time that we brought 'Australian Comics' to Asia, which has a different culture. This is something that I needed to keep in mind when I selected works. It was very exciting and it came to be because of a special invitation from the Australian embassy. Thailand is a place I really wanted to bring Australian comics because there are probably more differences between the two countries' comics," said Jakub.

With 33 artists, the third edition of "Australian Comics – Promoting Culture Through Visual Story Telling" is the biggest event in the series so far. Jakub said when the exhibition was organised at the Australian embassy in Berlin, it made a difference. 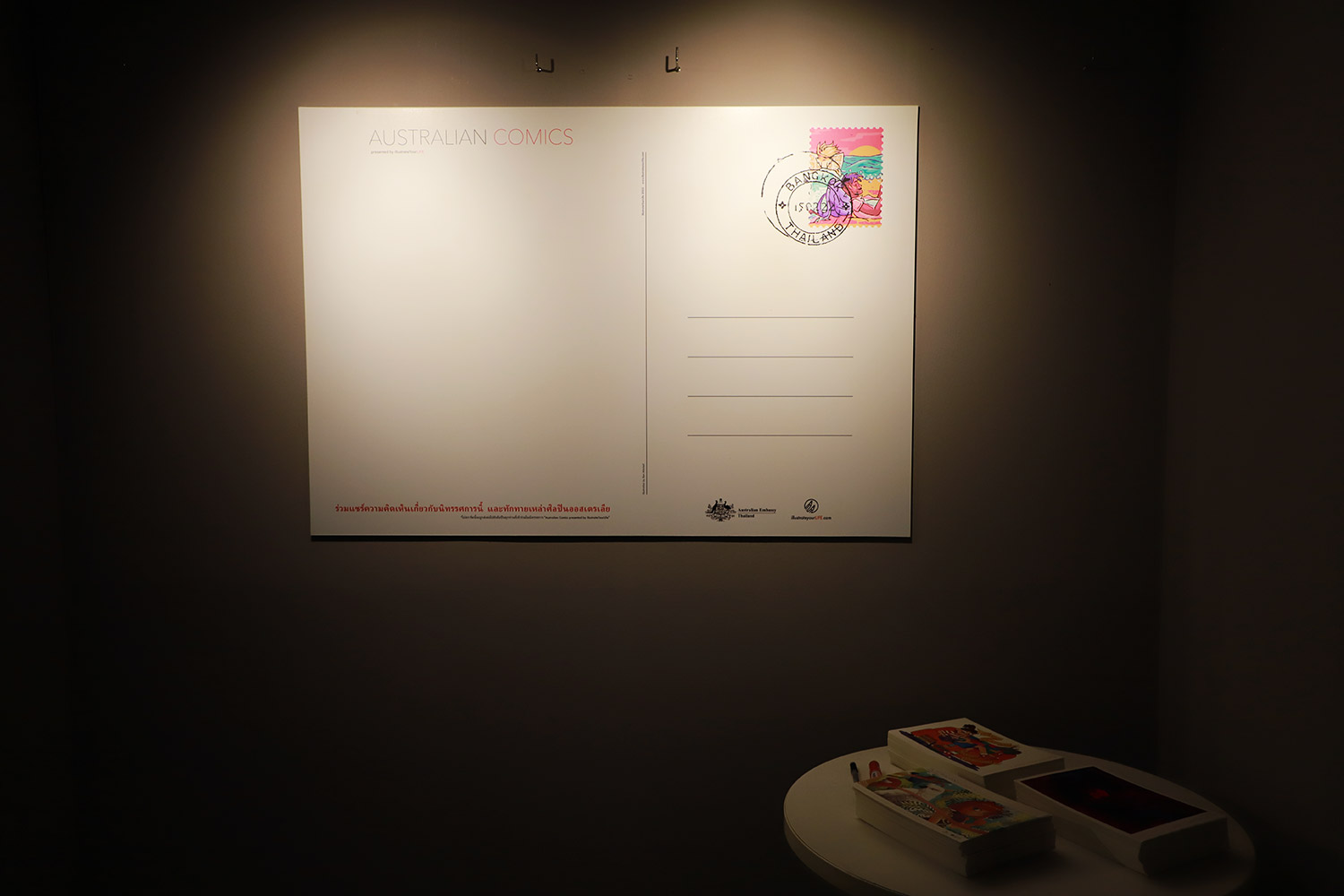 "It was the first time we broke barriers, as an embassy is normally perceived as a very formal place, but we brought comics into it. It is a new context that we added to the perception of the exhibition because, at the embassy, people think about something strict and formal and having to behave, but then, they see beautiful comics and very colourful artwork. We proved that comics are actually an art that belongs in many places and can be viewed by several kinds of audiences," Jakub said.

On display at BACC, viewers will see works of each artist on a one-page poster that includes their comics, a brief biography, their website and social media.

"There is no specific topic covering these comic books from the pages we present. We have comics for kids and for grown-ups. Artists present different themes and techniques. Since I am more of a visual person, comics have to be visually attractive. I select works that I like visually and the next step for me is reading what the comic is about. In this exhibition, we have 33 artists, so the selection is broad. I really admire their styles and topics they tried to raise in the comic books speak to me deeply," said Jakub.

When asked about the uniqueness of Australian comics, Ben said he thinks Australian comics are a little rougher around the edges and look a little bit messy. Jakub added that the comics include many Australian characters. He gave an example of his artwork which has the character, George the Kangaroo, to represent a character in Australia.

There are many intriguing works in the exhibition. One of the highlights is from bestselling cartoonist Gavin Aung Than, who created the famous cartoon blog Zen Pencils, which later was launched into four books. His latest project is the action-adventure kid series, Super Sidekicks. Another cartoonist, Jonathon Saunders, is a Darwin-based indigenous illustrator and animator. His artwork focuses on superhero iconography and explores the themes of morality, heroism and identity. His recent work is the animated mini-series Zero-Point Season Zero.

While Jakub prefers to present his colourful cartoon characters including George the Kangaroo, Ben, displays six artworks that present fiction and non-fiction. 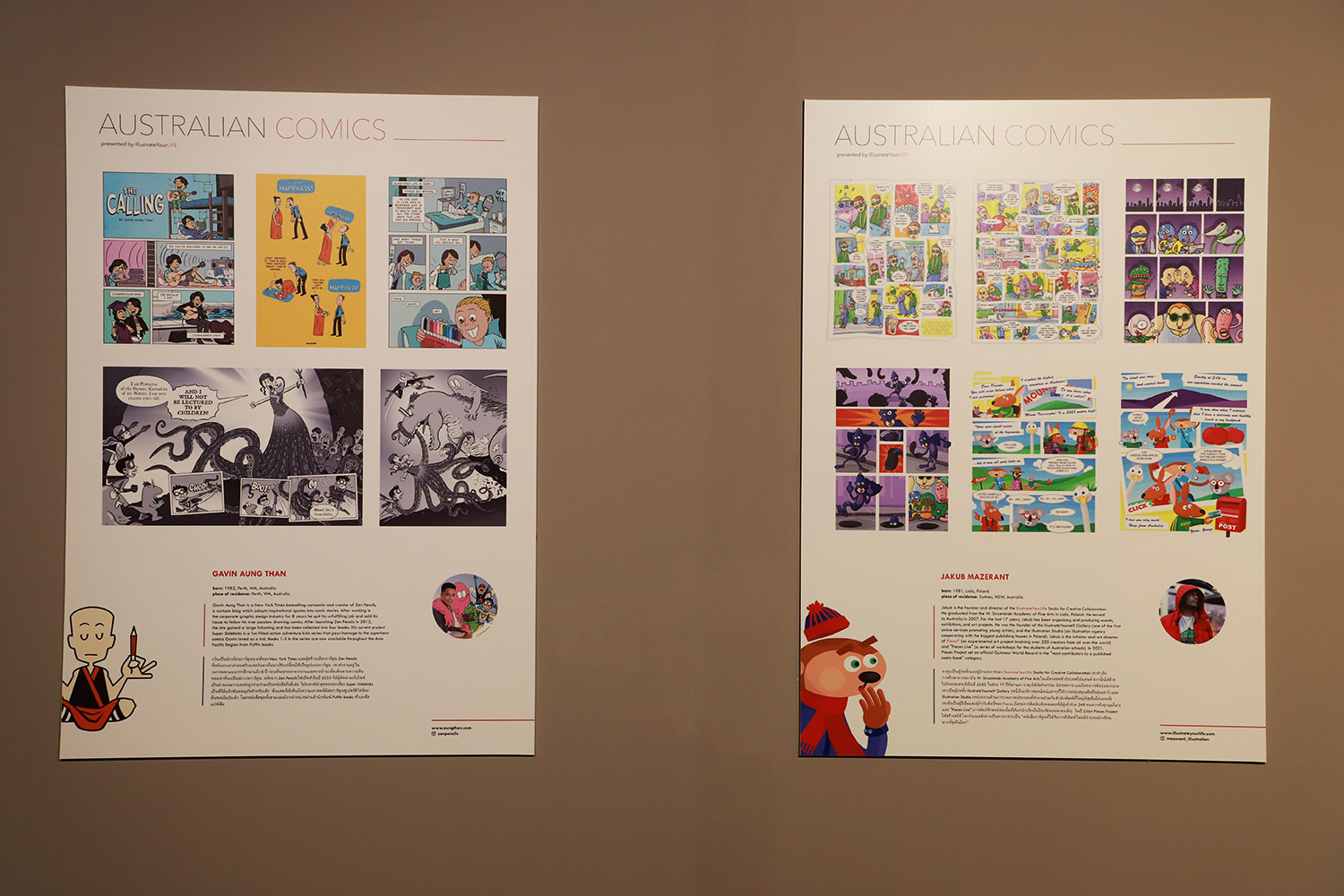 From left, artworks by Gavin Aung Than, a New York Times best-selling cartoonist, and Jakub Mazerant.

"My early work was fiction set in the city that I grew up in. Since then, I have been focusing on non-fiction which I treat like journalism stories. In one story, I interviewed a man who runs an organic farm and in another one, I interviewed a very famous local punk rock band. I also chose a story of my friend opening a grocery store during the initial Covid-19 lockdown and a story about bushfires that happened at the beginning of 2020," said Ben.

At "Australian Comics" in Poland and Germany, "Postcard" posters were available for viewers to write down comments. They allowed Jakub to know that he was on the right track.

"The 'Postcard' posters are risky because if somebody does not like the exhibition, they can write their comments on the board and all can see it. In Germany, 'Australian Comics' was held at the same time as a big German comics exhibition. One German comic artist, whom I look up to, came to give me good feedback. He drew his cartoon character on a 'Postcard' and wrote that our exhibition was great. I was happy about it," said Jakub.

Making a living in an art industry has never been easy, even in a developed country like Australia. Jakub and Ben said they do not know anyone who makes a living as a comic artist only, because they have to keep many jobs to earn sufficient income. Jakub said he works on promoting and organising events and exhibitions and runs projects that involve artists. Besides creating non-fiction comics, Ben said he has been working as a commercial illustrator for more than a decade.

Ben and Jakub are fond of comics because they feel they are a language that can connect people with the same interests and they hope the exhibition will open some opportunities for Australian artists.

"I hope people will come to the exhibition and enjoy themselves. In the morning before the opening of the exhibition, we held a comic workshop at a university in Thailand and the workshop result was a student and a comic artist following each other on Instagram. 'Australia Comics' was designed to build this kind of connection. This is something that is really close to my heart. It is the main goal of the project. I do it to actually build bridges between countries and cultures," concluded Jakub.