For me, the word "ritual" evokes tradition and cycle. And there's plenty that is traditional and cyclical at this year's Singapore International Festival of Arts (Sifa). But with a new festival director, Natalie Hennedige, the programme under the theme "Anatomy Of Performance: Ritual" also embraces questions of the future and the digital space.

The more obvious futuristic works in the festival include Holly Herndon's Proto, a concert featuring human and AI–made sounds; sci-fi artist and body architect's Sifa-commissioned short film Delicate Spells Of Mind; and the closing performance, Once And Future, which brings together Singapore's filmmaker Yeo Siew Hua and members of the Berliner Philharmoniker to ponder the future of Earth and humanity.

The less obvious is something like ubin, which takes the audience into nature to contemplate the future of a place where human settlement and activity have dwindled over the years. The way Hennedige mixes and matches artists across genres, cultures and performance traditions so boldly, as if with little care for clashes and chaos, could also be interpreted as something forward-looking or as broaching impossible notions.

Let's start with failures here, shall we, so we can end on a triumphant note? I got to see two performances during Sifa's opening weekend: Mepaan (May 20 and 21), and Ceremonial Enactments (May 21 and 22).

So the failure that was Ceremonial Enactments. What initially excited me about this production, which brings together Max.Tan, Nadi Singapura and Bhaskar's Arts Academy, was the obvious and radical mismatch between this group of artists.

Max.Tan is a Singaporean fashion brand that has achieved commercial success and garnered international recognition. Nadi Singapura is an 11-year-old Malay percussion ensemble co-founded by two musicians from two different generations. And Bhaskar's Arts Academy, established in 1952, is a Singapore-based school and company of classical Indian dance, music and theatre. 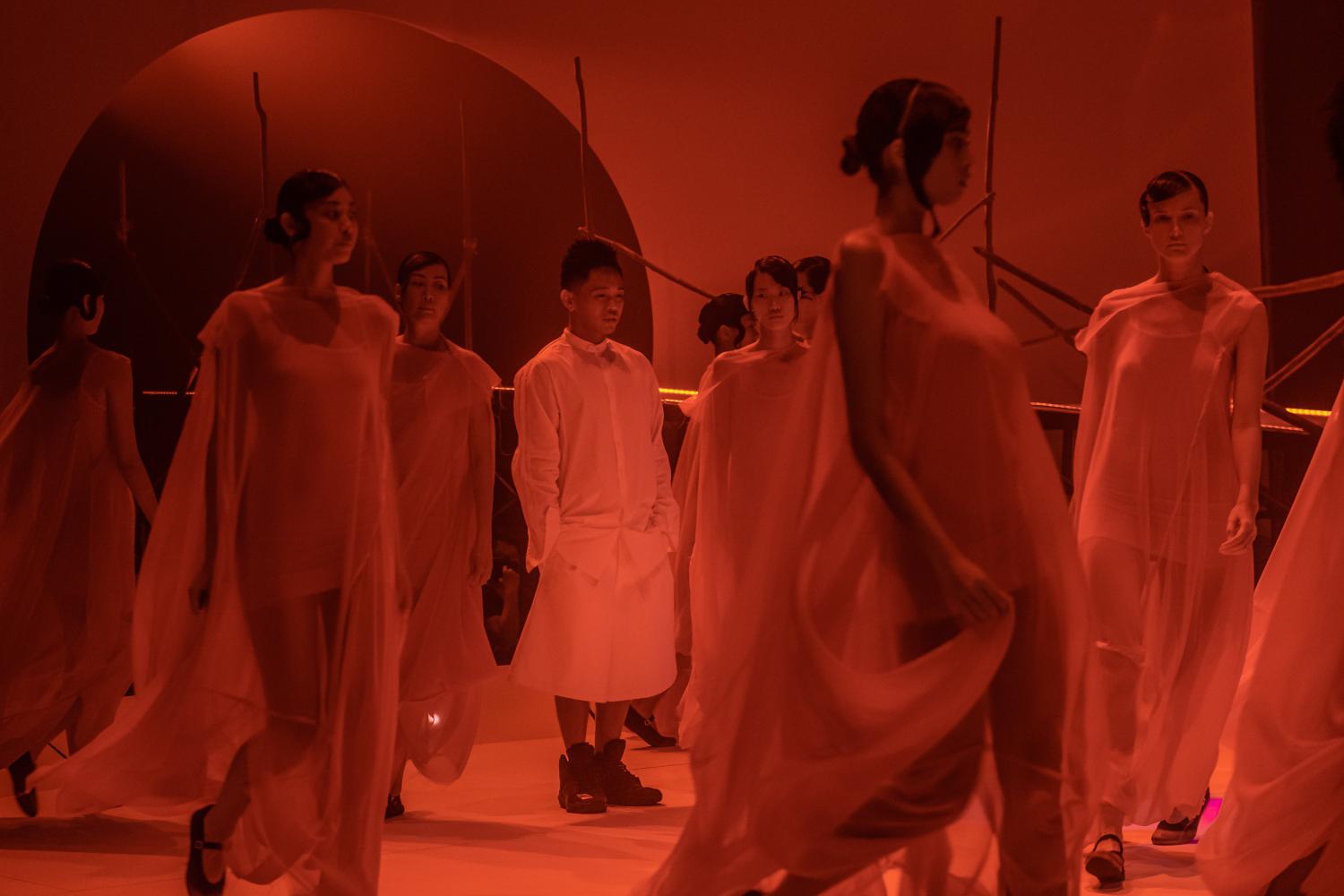 How are they going to work together in the same show?

The answer, unfortunately, is that these artists didn't exactly get to work together. And this was obvious from just watching the show. There was Ceremonial Enactments that came out looking like the kind of cultural showcase assembled together more by a government's tourism board rather than an arts festival's curation.

The performance was divided into three acts, with each company/artist taking charge of their own separate act. Hennedige and choreographer Gino Babagay helped oversee the way the three shows come together, but there was no single director for Ceremonial Enactments. The three performances were superficially tied together by the theme of "ritual", which they interpreted in vastly different ways.

In Act I, designer Max Tan's Ang explores birth and death through fabric, fashion show, and recorded conversations with his mother about birth and death. Nadi Singapura's 293NW depicts a Malay wedding ceremony. And in the final act, Bhaskar's Arts Academy's Yantra Mantra pays respect to celestial custodians of Hindu temples with a dance choreographed by the late Santha Bhaskar (who died in February) and her daughter Meenakshy Bhaskar.

These three acts are also linked by Tan's costume design (Tan also designed for several other productions in this year's Sifa) and a man and a woman who walked around the stage like ghostly figures. As I was sitting in the majestic Esplanade Theatre trying to figure out whether this production was a daredevil artistic stunt or an unholy mess or both, it was these two ghostly figures that annoyed me almost immediately. They seemed to blend in with Tan's performance the most but stuck out awkwardly in the second and third acts. This superficial attempt at knitting the three shows together only grew more unconvincing and desperate as the show progressed and the parade of two ballooned into one of the entire cast by the end.

Despite being the most ostensibly personal, Tan's Ang was the least emotional. Visually, it could be compelling, with all the red cloths and red lights that flushed the gleaming white set, not to mention all those models marching up and down the ramp that extended into the audience. But the fashion show itself was bland and cold. It didn't help that the ramp designed by Randy Chan, though beautiful and brimming with possibilities when you first entered the theatre, only extended from one side of the stage into the audience. From where I was sitting, the fashion show felt like a sideshow. 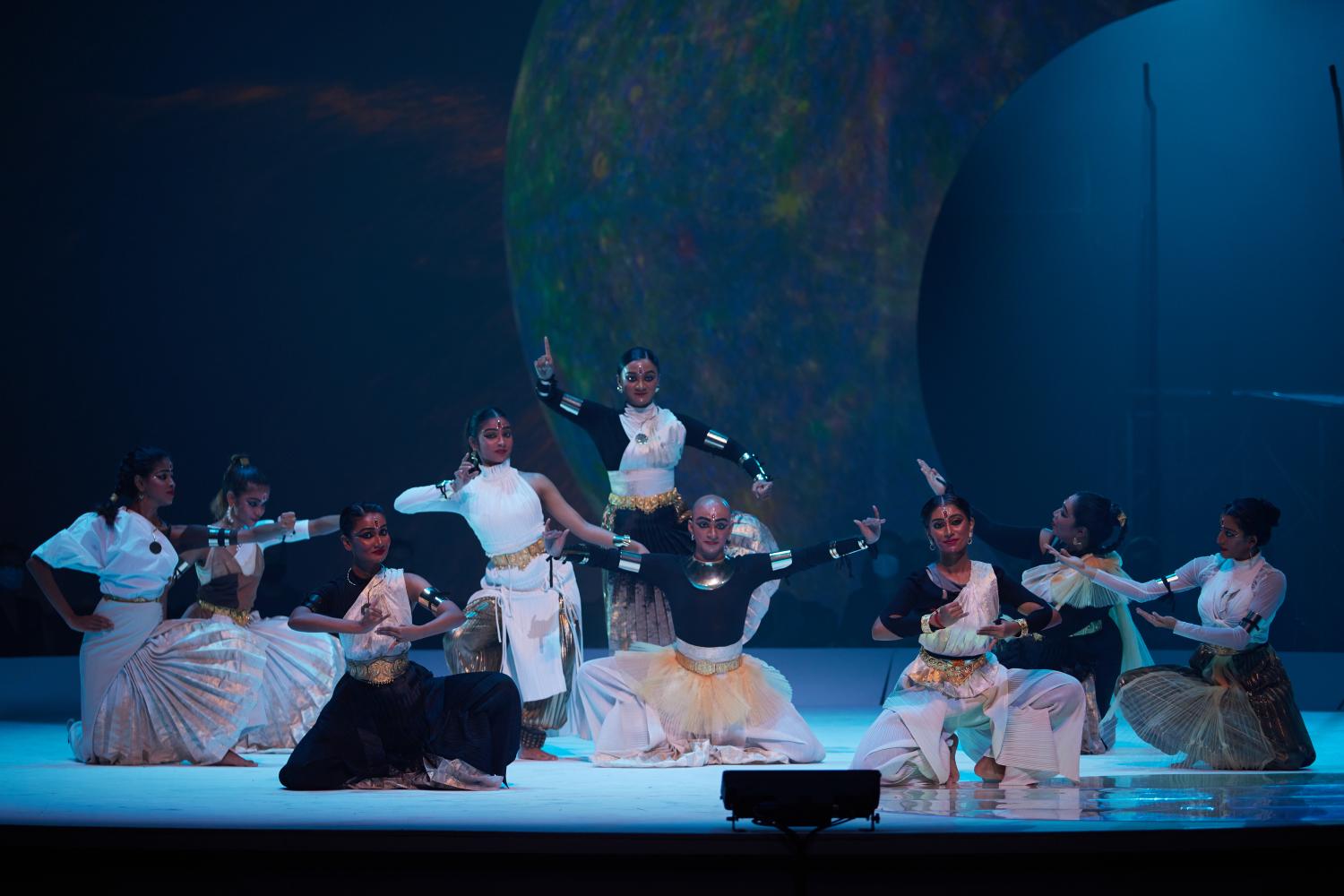 The other two shows may have appealed less to people with a penchant for more contemporary aesthetics and language. I'm one of those people, but I found Nadi Singapura's and Bhaskar's Arts Academy's creations to be much more satisfying. Director Riduan Zalani of Nadi Singapura had created something joyous and at times rousing. My favourite moment of Act II, and perhaps of Ceremonial Enactments, was when the bridal party burst forth onto the ramp with their drums and gave a stirring performance. It was a powerful, sexy and surprising moment in a performance that was more focused on men and the man's journey towards husbandhood.

In Yantra Mantra, the dancers' skills were uneven, but their performance felt suitably devotional, sacred and disciplined. All the design elements were at their most harmonious here. With a shimmering and muted palette, Tan's costume design was an elegant play on traditional mohiniyattam dance costumes and sci-fi looks. Brian Gothong Tan's multimedia design of planets and lighting design by Andy Lim also came together beautifully.

I got to speak with Zalani and Bhaskar the day after the performance, and it gave me a much deeper appreciation for what they do as artists and how boundary-breaking they actually are. Zalani's performance brought together different types of Malay percussion traditions from across the region. He even included Malay hip-hop in the act. And Bhaskar's Arts Academy has been working with dances and stories of other cultures for a long time.

That's the main problem with Ceremonial Enactments. The way these artists and their works are presented -- like Singapore's cultural showcase for tourists -- flattened them by making them seem like mere representatives of their ethnicity and artistic genres. And that did these artists a great disservice: their limitations were underlined, while their potential went under-explored. The lack of genuine collaboration stifled their capabilities to cross artistic borders and robbed them of their abilities to have any kind of artistic tension. Their collaboration could have certainly resulted in a massive failure, sure, but we would have at least appreciated the effort if not the result.

I have no doubt that Sifa had the good intention of giving these leading Singapore artists an equal platform to be seen together in one space. But Ceremonial Enactments ended up saying a lot more about the contemporary art world's lack of curiosity and attitude towards traditional arts practitioners (not that these labels aren't limiting): "You do you. We'll do the cool conceptual, cross-disciplinary stuff for you." 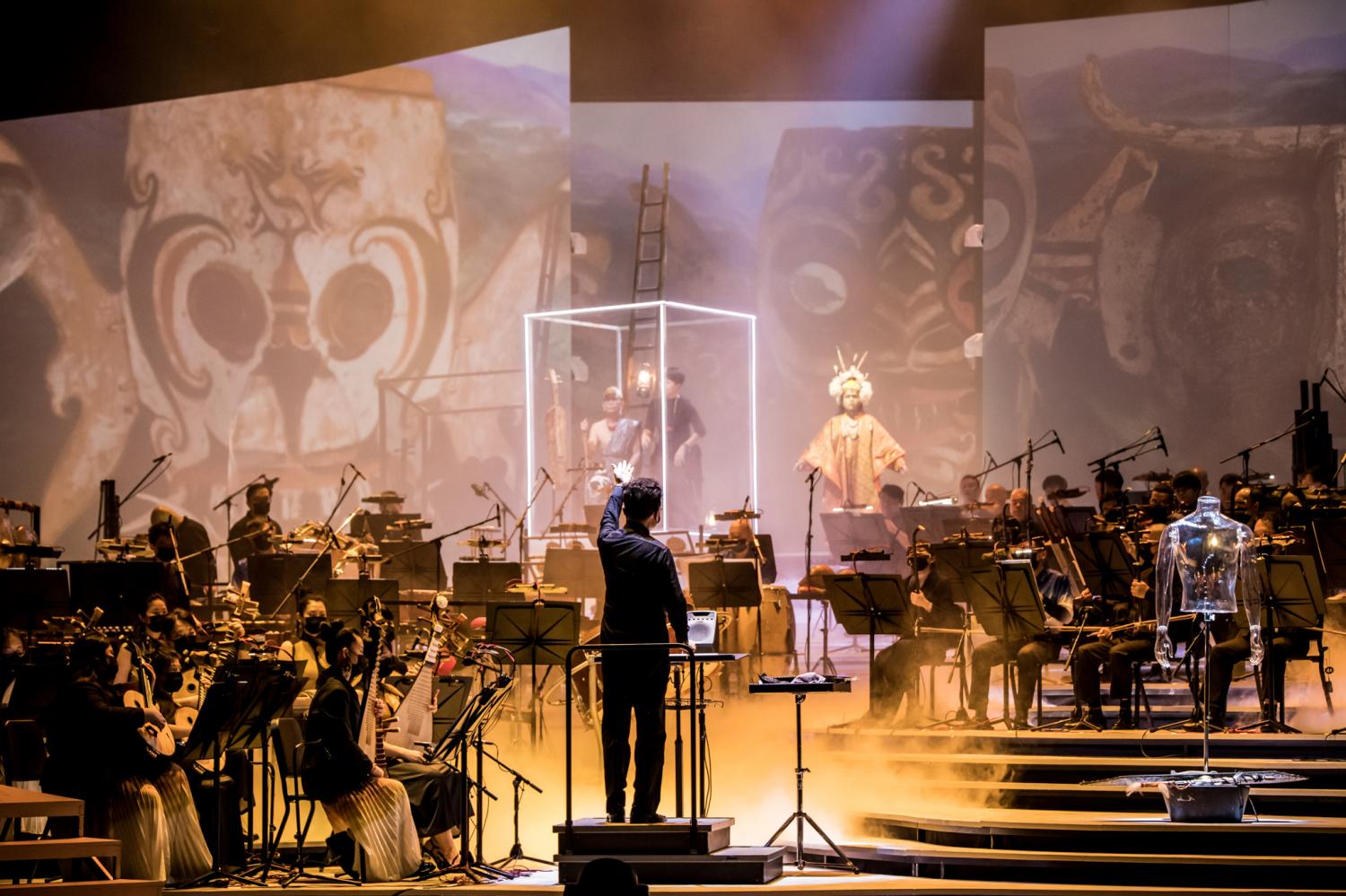 From the final rehearsal of Mepaan.

A bolder and much more successful collaboration could be seen in Sifa's opening performance, Mepaan. Directed by Hennedige, the concert was one of the most beautiful musical experiences I've ever had. Performed at Pasir Panjang Power Station, Mepaan brought together the Singapore Chinese Orchestra and Kayan performers who are represented by the Tuyang Initiative, a social enterprise based in the Sarawak state on the island of Borneo, Malaysia, that connects cultural practitioners in indigenous communities to the creative industry.

Both the musical and the visual elements in Mepaan came together so harmoniously. Compositions by Koh Cheng Jin, Kong Zhixuan, Tang Jianping and Wang Chenwei took us through a journey that started off delicate and gentle, dipped into darkness, emerged lush and sensual and finished off on a rousing and triumphant note. As transporting as the compositions were, they were always restrained. Even when they sounded war-like and eerie, they were never fully terrifying. The Singapore Chinese Orchestra, led by Maestro Tsung Yeh, delivered a stirring performance.

The Kayan performers‚ Adrian Jo Milang and sape master Mathew Ngau Jau, gave a stunning and dignified performance. I wish the camera that was capturing Jau's carving his sape live onstage would have stayed with him longer. I would have appreciated watching an artist deep in concentration and hard at work preparing his musical instrument. Milang is a practitioner and inheritor of two Kayan oral art forms: parap (improvised poetic song) and takna (delivery of epic songs about heroes that could last for days). He has a breathtaking voice that could command attention from a great distance.

Music has long been a medium, a language that strangers use to speak to one another. Hennedige succeeded here in the way that she didn't with Ceremonial Enactments. While both showed her boldness of vision as an artist and festival director, Mepaan revealed a more curious and daring effort to bring artistic and cultural strangers together. It didn't shy away from aesthetic confrontation, and the result was, luckily, one of harmony and beauty.

Sifa 2022 ran from May 20 to June 5. Mepaan and Ceremonial Enactments are available via Sifa on Demand from June 20 to July 10, along with other titles. For more information, visit sifa.sg.