published : 31 Jul 2022 at 18:04
writer: South China Morning Post
Members of the media stand in front of a background showing Hong Kong boy band Mirror during a news conference on Friday after a giant video panel fell onto the stage during a concert in Hong Kong on Thursday. (Reuters photo)

HONG KONG: Concert organisers may be barred from installing large stage sets for coming shows until the full completion of a probe into a shocking accident involving boy band Mirror, the city's culture minister has said.

Secretary for Culture, Sports and Tourism Kevin Yeung also sought public understanding on Saturday to allow authorities to look into the full details of the case, which he said might take a few weeks. Outraged fans had demanded more explanation from the concert's main contractor, Engineering Impact.

The furore centred on a mishap on Thursday night in which two Mirror members were performing at the Hong Kong Coliseum in Hung Hom when dancer Mo Lee Kai-yin, 27, was hit by a giant, four-by-four-metre screen that fell from above the stage.

Mo is in danger of becoming paralysed from the neck down, while another dancer Chang Tsz-fung, 29, who was knocked over by the screen after it crashed, was discharged on Friday.

Preliminary investigations had found that one of the two metal cords suspending the large screen had snapped in the middle of the performance.

Yeung added on Saturday that government departments needed more time to clearly identify the roles of the main and subcontractors behind the concert structure, as well as installation procedures.

"We pledged to investigate the incident fully, including the design and materials used for the metal cords. Since the screen can be rotated and lifted, we won't rule out that accidents can easily occur during operation," said Yeung, who will lead a task force under the Leisure and Cultural Services Department to find out what went wrong.

But Yeung refused to reveal the identity of the contractor who set up the screen at the coliseum, suggesting departments might need "a few weeks" to complete the full investigation. 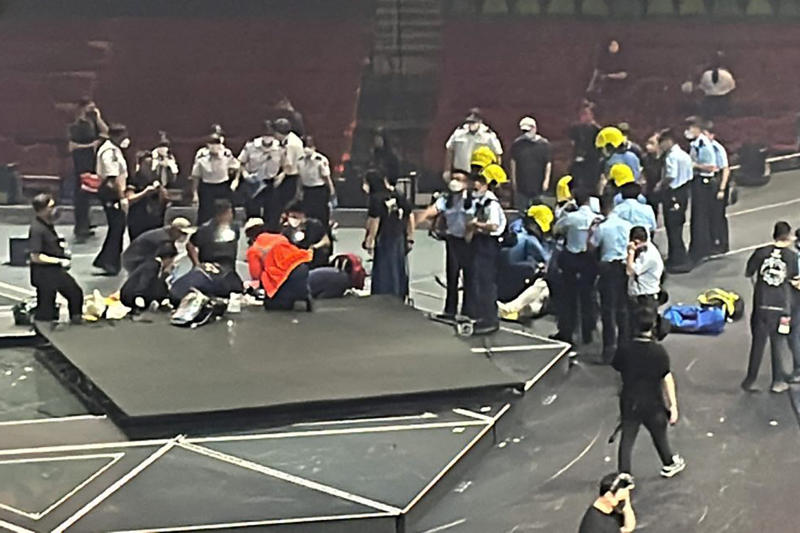 Paramedics treat two dancers on stage after an overhead video screen fell during a concert by boy band Mirror at the Hong Kong Coliseum in Hong Kong on Thursday. (AFP / courtesy of anomymous source photo)

The minister said the next concert at the coliseum was set for mid-August, while authorities would discuss with organisers how to adjust stage arrangements for safety.

"If it is some static performances, not too tricky, with simple dancing and light arrangements, we will allow them to carry on, but if the show involves installations similar to those in the accident, we may have to ask them to cancel," he said.

"Safety is the top priority for performances. It is important to have a good performance, but it is definitely not worth it at the cost of safety, especially when it involves human life."

Canton-pop singers Terence Lam Ka-him and Endy Chow Kwok-yin will be the next two to perform in the Coliseum. Lam has six shows starting from Aug 19, while Chow's three-day concert will begin on Sept 2.

The department will also reach out to organisers of shows at all public venues, including orchestra or drama performances, with the Mirror probe under way.

Yeung also pledged to make improvements if problems were found in the current regulatory system, but added he believed the mechanism at present, requiring organisers to hire professionals to inspect stage installations and issue certification, was reliable.