The Royal Bangkok Symphony Orchestra has for a very long time enjoyed the enthusiastic support of a sizeable, loyal local cohort of music aficionados who attend many (in a few cases, all) of each season's concerts as a significant part of their essential cultural experience. Following the latest outing by Thailand's most august classical symphony orchestra, a particularly ardent concertgoer who follows the entire Bangkok music scene very closely could be overheard stating in the foyer: "That was one of the finest concerts I have ever heard by the RBSO!"

Joined on this occasion by the impressively authoritative Russian violinist Eugenia Karni, Tchaikovsky's evergreen Violin Concerto received a particularly invigorating interpretation by the amassed forces, with German-Indonesian guest conductor Adrian Prabava bringing out all of the exquisite subtleties of this sunniest of scores, while allowing the soloist to sail atop the texture with a blissful expressivity. One could immediately anticipate something special from the way that Karni engaged herself so persuasively with the first subject of the concerto -- coaxingly at first, building assertively with the double-stopped reprise. Every subsequent phrase ensued with an effortless vitality, while her interpretive style came across very much in the traditional Russian, romantic manner.

Playing on a Vincenzo Panormo violin built in Paris in 1975, her liberal utilisation of rubato and wide dynamic contrasts were unashamedly free, as she spun her sound like a supreme singer, often reducing the tone quickly from forte to subito pianissimo and then back again in true bel canto fashion. She managed this technique quite demurely, notably with the second subject of the first movement and once again in the second movement canzonetta. This central movement was so lovingly played, characterised by a wonderfully natural flow. There was indeed a rare intimacy about her playing, which sat well with the attentive ranks of the Royal Bangkok Symphony Orchestra.

However, in many ways it was the wild Cossack-dancing finale that sent this convincing interpretation spinning into the orbit of the very best. The partnership with conductor Adrian Prabava could hardly have been any tighter as the finale abruptly picked up the tempo. Here she avoided the often heard rhetorical slacking of tempo at this crucial juncture. Instead Karni responded to the fiery orchestral introduction in kind, pressing forward with an iron will.

Known primarily as a concertmaster, from 2014-2019 Karni was first concertmaster with the Nordwestdeutsche Philharmonie and from 2020-2021 with the Südwestdeutsche Philharmonie in Konstanz. Since 2022, she has been second concertmaster of the Bern Symphony Orchestra and first concertmaster of the Orchestre de Chambre de Fribourg. Her first appearance with the Royal Bangkok Symphony Orchestra was indeed as concertmaster, in a memorable performance of Brahms' Symphony No.4 in 2019. Hence, the sense that Karni was to some extent the first among equals here on the stage of the TCC made for especially telling interplay with her RBSO colleagues. This performance shall long be remembered for its consistent imagination, flair and exceptionally clean playing. 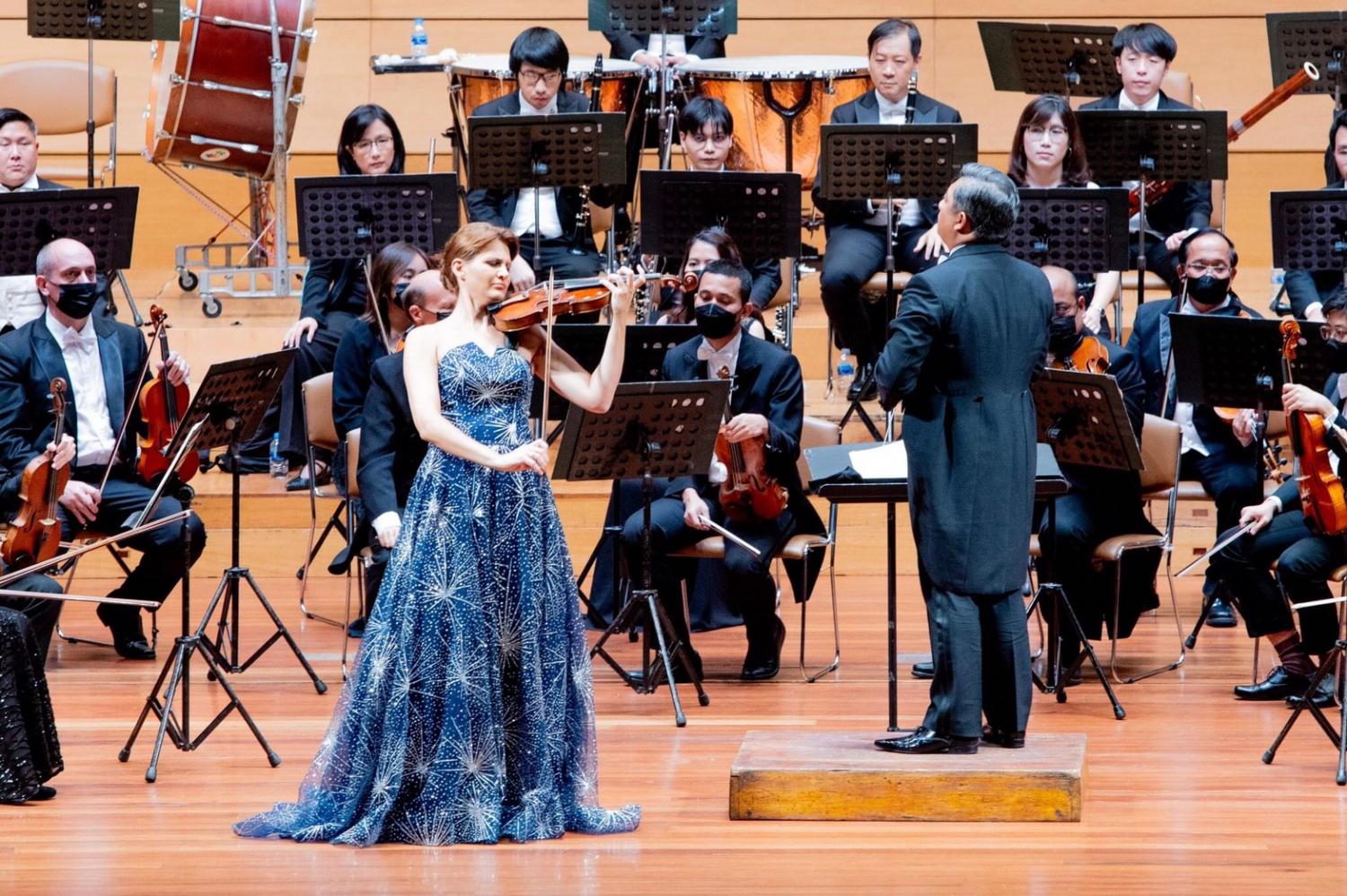 Maestro Prabava began the concert with Sibelius' rousing Finlandia, opening with a series of searing brass statements that gave way to a more pastoral woodwind section passage, then followed by a supplicating hymn heard in the strings. Effectively a second national anthem for Finland, the RBSO was fully galvanised from the very start and entered wholeheartedly into the spirit of the piece.

After the interval he then conducted a truly beautiful work from the orchestral repertoire -- Schumann's Symphony No.4 In D Minor. The four movements flow together without interruption, effecting an ingeniously novel cyclic form whereby the composer's famous "Clara motif", for example, reappears at significant moments throughout the work. Prabava was clearly most attentive to this aspect of Schumann's culminating symphonic masterpiece. The first movement's final cadence lead directly into the Romanze: Ziemlich Langsam with the smoothest of temporal gear-changes. Here a far more intimate, songlike world featured a beautiful lamenting melody in the solo oboe and cello. This was later taken up by solo violin obbligato, played convincingly by RBSO concertmaster Bing Han.

The scherzo was full of jovial ferocity, interrupted only by the flowing repose of a sublime trio section, which itself faded into the quiet mystery of the bridge section into the final movement. (This is Schumann's tribute to the parallel moment in Beethoven's Fifth Symphony.)

The finale then erupted with euphoric joy and an exhilarating forward momentum. References to the preceding movements were crisply articulated by Prabava, not least the Clara motif, which received a resoundingly celebratory statement in the French horns. The exuberant coda section then duly brought this great cyclic drama to a thrilling conclusion.