If you wake up and discover that your favourite celebrity has suddenly disappeared from this world, what would you do? Pim, who is a plastic surgeon, experienced this incident. She is also a devoted fan of the popular K-pop group Little Tiger. One day, she finds she is the only one who remembers K, the leader of Little Tiger. Pim later experiences time travel to the Korean War in 1950. It was a time when Pim's grandfather, Kram, joined the 21st Royal Thai Regiment in the Korean War.

Pim's story is a webtoon series titled One Day, My Favorite K-Pop Idol Group Leader Disappeared!. The Korean Cultural Center (KCC) in Thailand and Kakao Webtoon, a platform from South Korea, collaborated to launch the series to commemorate the sacrifices of Thai veterans who participated in the Korean War to protect freedom and peace.

Cho Jae-il, KCC Thailand director, said in a statement that although there is K-pop fever among young Thais, they are not aware of the sacrifices made by Thai war veterans and rice support provided by the Thai government to South Korea during the Korean War.

"This realisation is what prompted us to launch this webtoon series to help young people remember Thai war veterans. I also hope that this webcomic series will promote friendly relations between the two countries, and it will be a successful Korean-Thai soft power co-operation."

In addition to launching One Day, My Favorite K-Pop Idol Group Leader Disappeared!, KCC co-operated with Kakao Webtoon to organise "K-Webtoon Exhibition", which displays illustrations of famous characters and beautiful scenes from popular webtoons such as the romantic comedy Business Proposal, the action fantasy Solo Leveling and the romantic fantasy Solitary Lady. Visitors can take photos with their favourite characters at KCC until Jan 31. 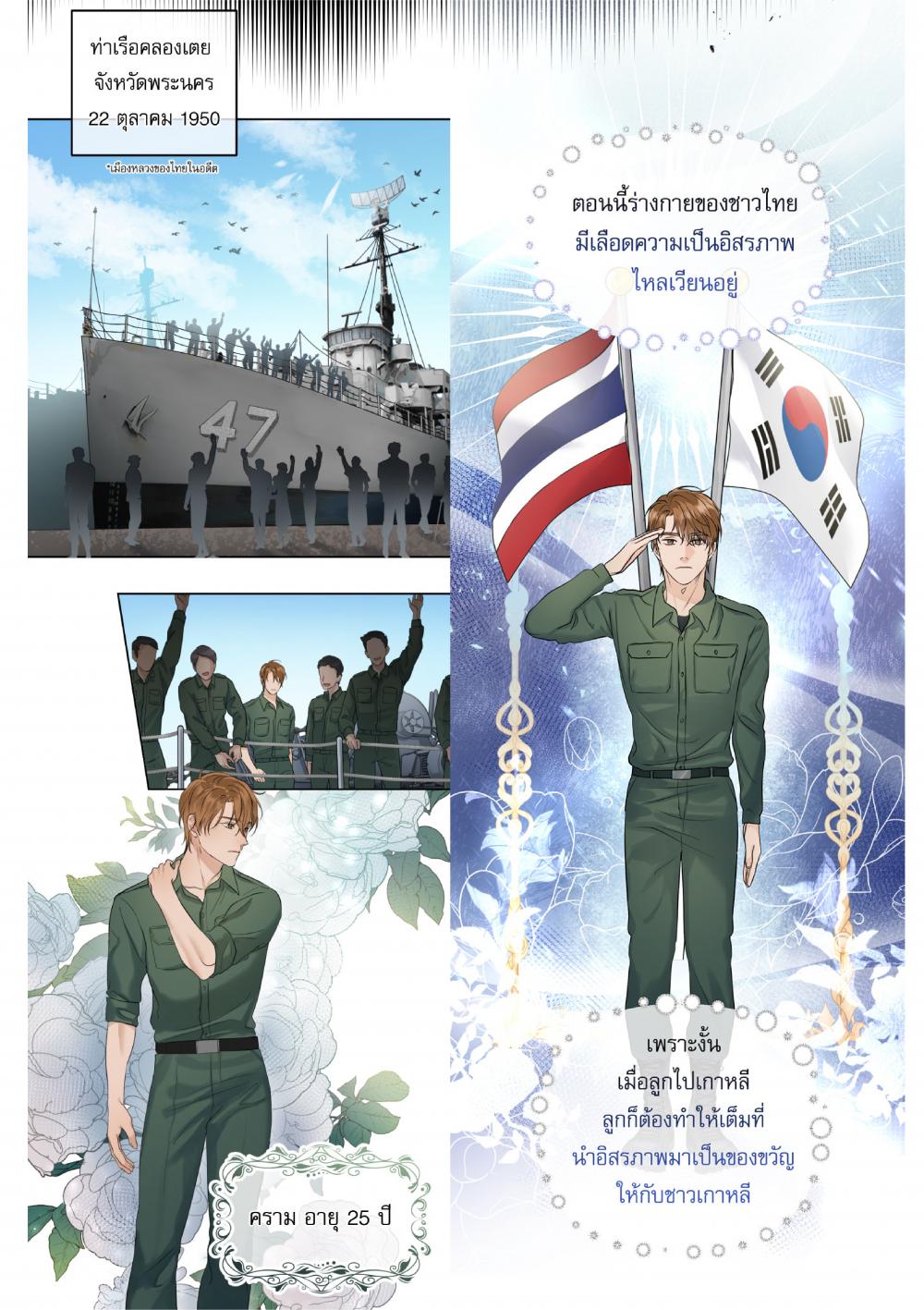 Kim Suea is the pseudonym of a Korean author who wrote dialogue and storylines for One Day, My Favorite K-Pop Idol Group Leader Disappeared!. Kim Suea, who is also a scriptwriter for many TV series in South Korea, told Life through a translator Cho contacted him and asked him to write a story to pay tribute to Thai war veterans. Kim Suea admitted that before writing this webtoon, he did not know the Thai army had joined the Korean War.

"Most Koreans know that the UN helped South Korea during the war and most soldiers came from the US and Europe. I knew that Thailand supported South Korea by contributing rice, but I did not know that the Thai military participated in the Korean War. Due to this webtoon, I learned the Thai military joined the Korean War to help us," said Kim Suea.

To create a solid story, Kim Suea spent four months researching the Thai military in the Korean War. He travelled to Chon Buri to speak with Thai war veterans and visited the Korean War Veteran Museum there.

"I spoke with a few Thai war veterans including Gen Bandit Malaiarisoon, president of the Thai Korean War Veterans Association, about their experiences in the war. This webtoon was created with the aim of building a better relationship between South Korea and Thailand, so I asked veterans to tell me about their difficulties during the war and stories of people who helped them. They told me about their Korean girlfriends and people who gave them water and food. It was the first time that Thai veterans experienced snow, so they felt numb and their limbs were frozen. It was difficult for them to deal with very cold weather. However, most historical facts are based on a thesis about the Thai military during the Korean War written in Korean by a Thai PhD student," he said. 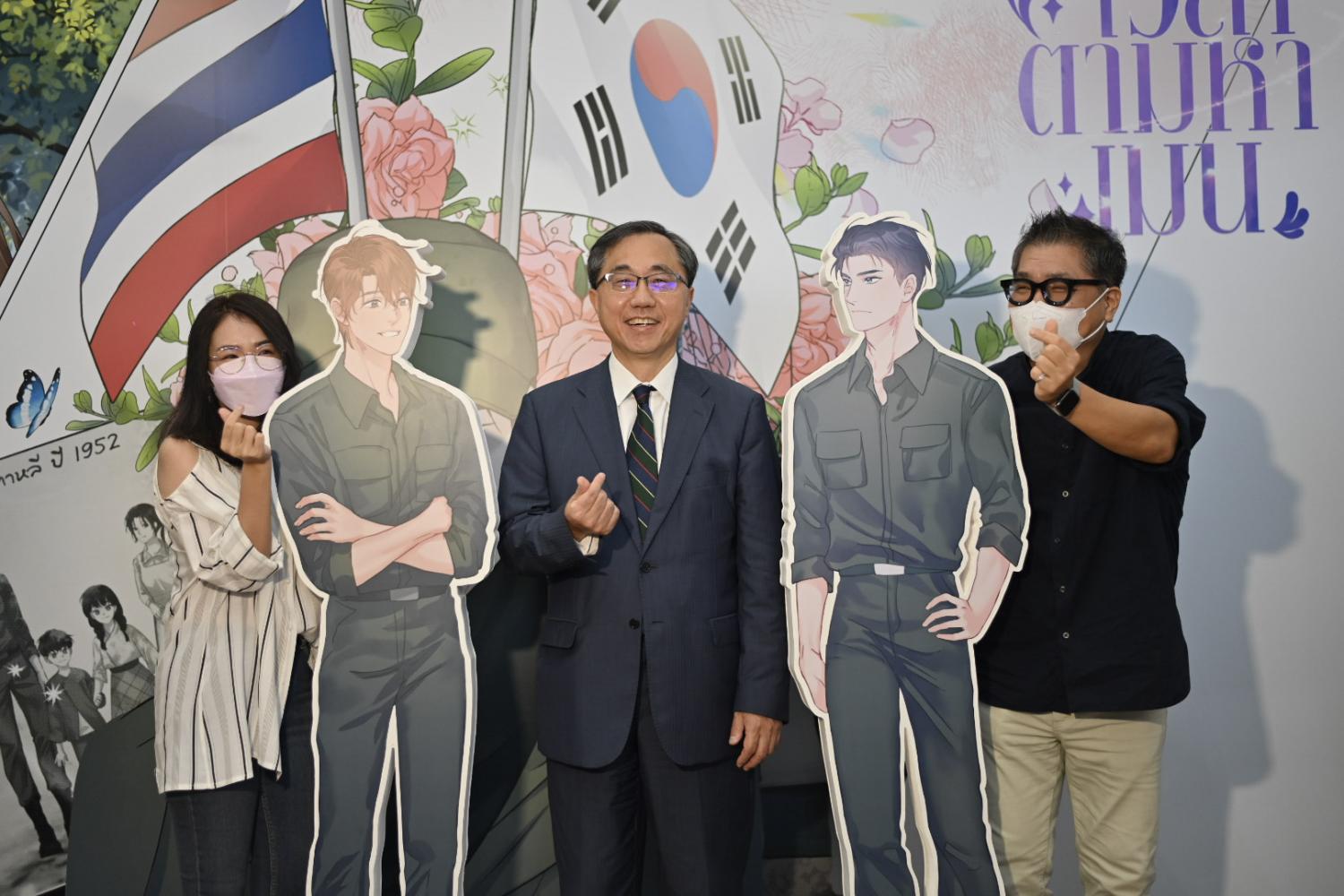 here are many details that Kim Suea added to the story after research.

"The K-pop group in the story was named Little Tiger because Little Tiger was the nickname given by the then-commander of the 8th United States Army to recognise the Thai battalion's valour. I developed the character of the female protagonist, Pim, from the Thai actress Noona Nuengthida. I saw her in a TV series, Oh My Ghost, which was remade from a Korean series with the same title," the author said.

After Kim Suea created dialogue and stories, he developed them into storyboards and sent them to the Thai cartoonist Fynnyx, the pseudonym of the illustrator and cartoonist in charge of drawing One Day, My Favorite K-Pop Idol Group Leader Disappeared!. Fynnyx has been a freelance illustrator for seven years, but this was the first time she drew for a webtoon.

"I am thrilled to have an opportunity to work on this project since I am a fan of webtoons. I was selected through an audition held by Kakao Webtoon. As a Thai person, I knew that the Thai army participated in the Korean War, but I did not know many details. Drawing for the webtoon is different from other illustrations because cartoon images should express emotions and feelings. For example, in a romantic scene, I have to add flowers and sparkling props to make the scene sweeter," said Fynnyx.

Although both Kim Suea and Fynnyx worked hard to gain information about the Thai military during the war, they still made mistakes in the webtoon.

"I tried my best to find accurate information about the uniform, but there were still mistakes because I could not find details of military rank insignia," said Fynnyx. 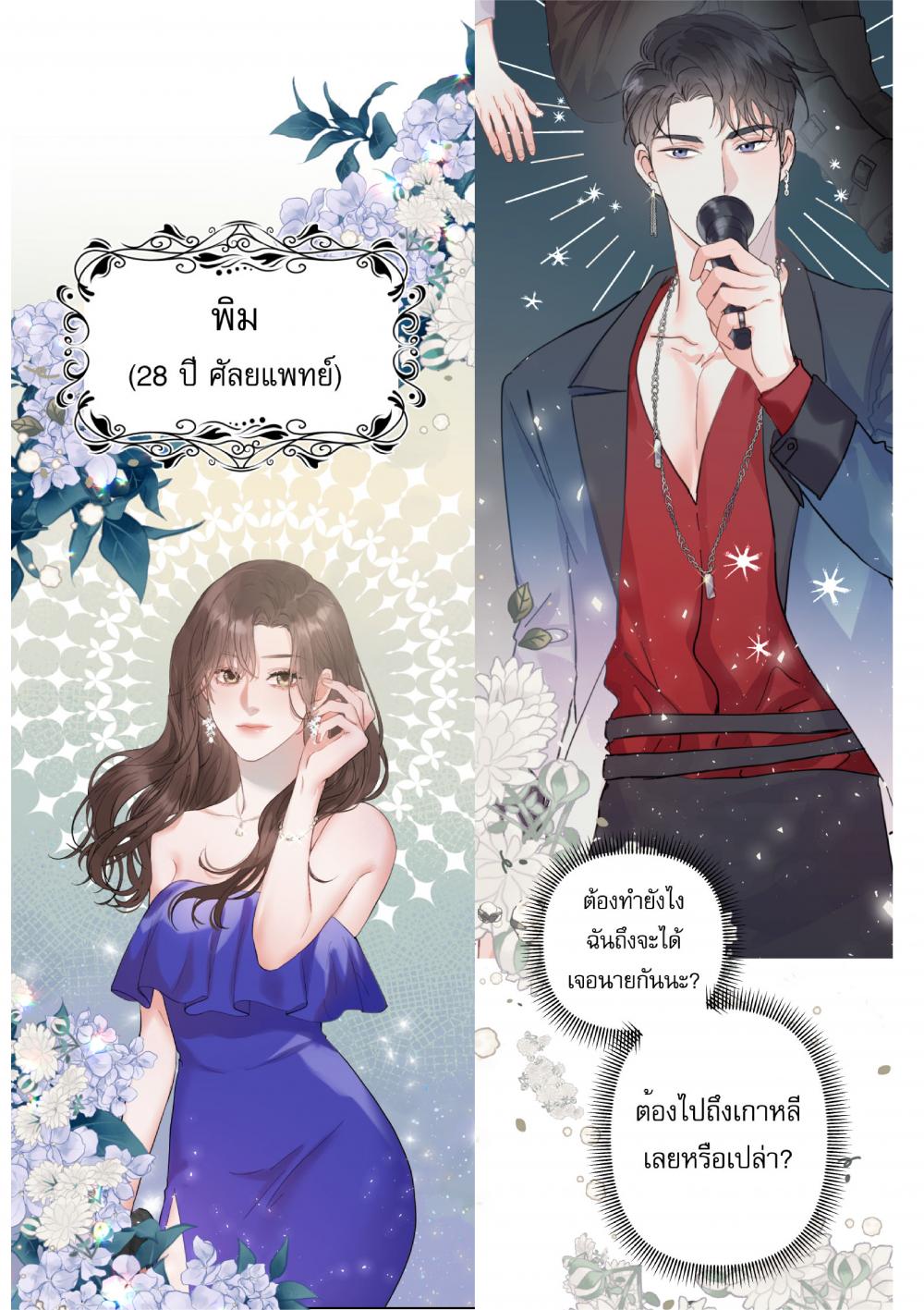 "We knew about the mistakes from readers' comments. If readers see any mistakes, please be kind and understand that it is difficult to make everything perfect. Another comment is that the males have long hair even though they are soldiers, but this is a webtoon. The characters should be handsome," said Kim Suea.

In Thailand, most history classes require students to memorise information from textbooks to pass exams. Students cannot discuss or give their own comments. This is similar to South Korea.

"When I was a student, students had to memorise history facts for exams. History was a very important subject in order to enter a good university. I do not know how the new generation learns about history, but I feel that younger generations lack knowledge of history. Many of them do not know about the Korean War," Kim Suea said.

Kim Suea revealed that he has finished the synopsis of the webtoon which includes the end episode. However, the author said the story can be changed according to reactions and feedback from readers.

One Day, My Favorite K-Pop Idol Group Leader Disappeared! is available at bit.ly/3X56sHL. 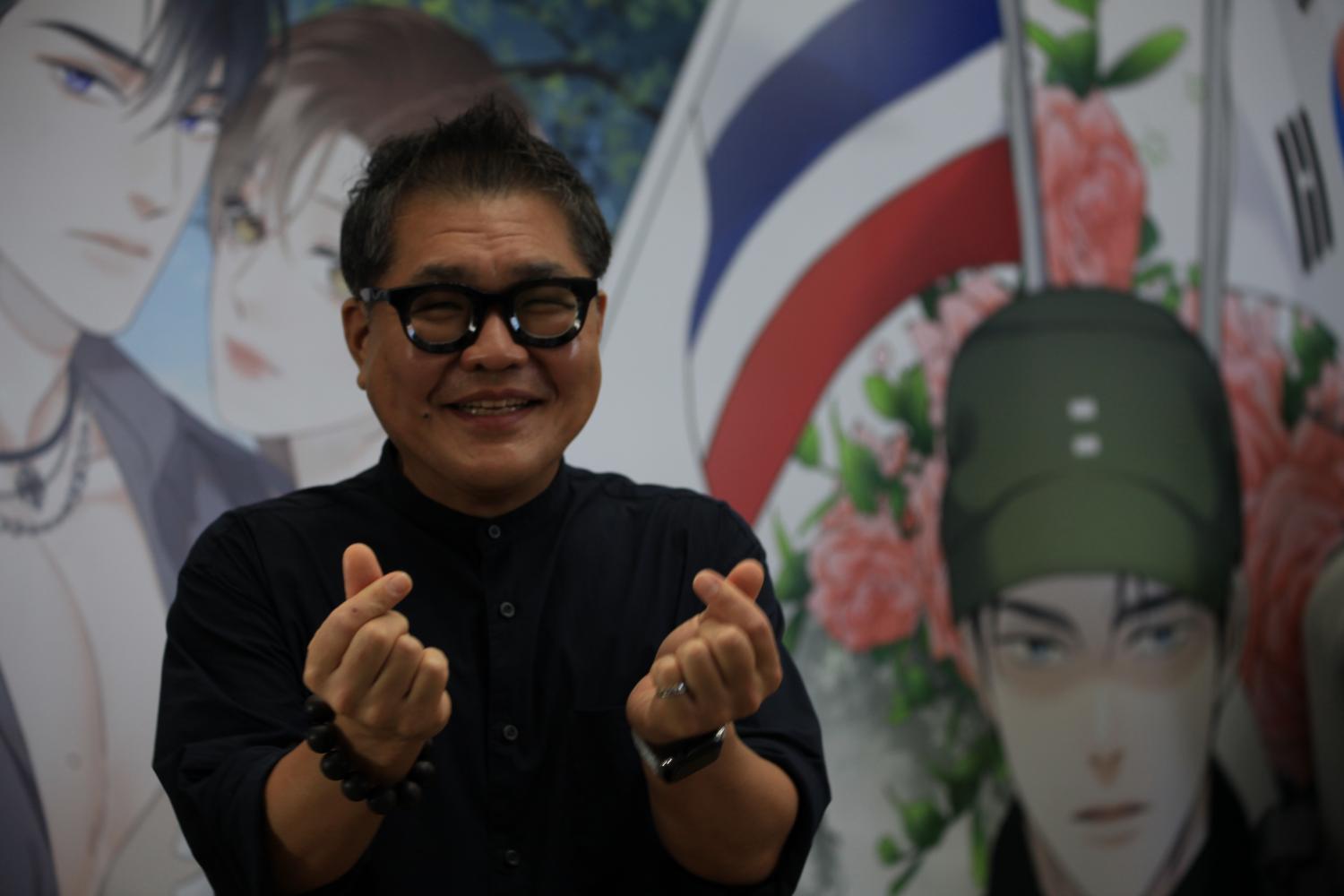