Graffiti artist Alex Face looks back at his two-decade career in a new exhibition, but says he's not hanging up his cans yet

The first time street artist Patcharapol Tangruen sprayed his pseudonym Alex Face on an old car in 2002, he did not know that in the coming decades his graffiti, paintings, sculptures and other art pieces would be well-received by art enthusiasts and the public. In the beginning, Patcharapol's signature artwork was a graphic of half his face. After Patcharapol became a father, his young daughter inspired him to create an iconic character -- a moody-looking three-eyed childlike figure in a rabbit suit.

Because of this cute character, masterful techniques and meaningful messages, Patcharapol became a renowned Thai artist whose exhibitions sold out in Thailand and abroad. To review, summarise and analyse his career over the past two decades, Patcharapol held the exhibition "20th Year Alex Face" at a four-storey building and warehouse located at 127 Na Ranong Road off Rama IV Road. 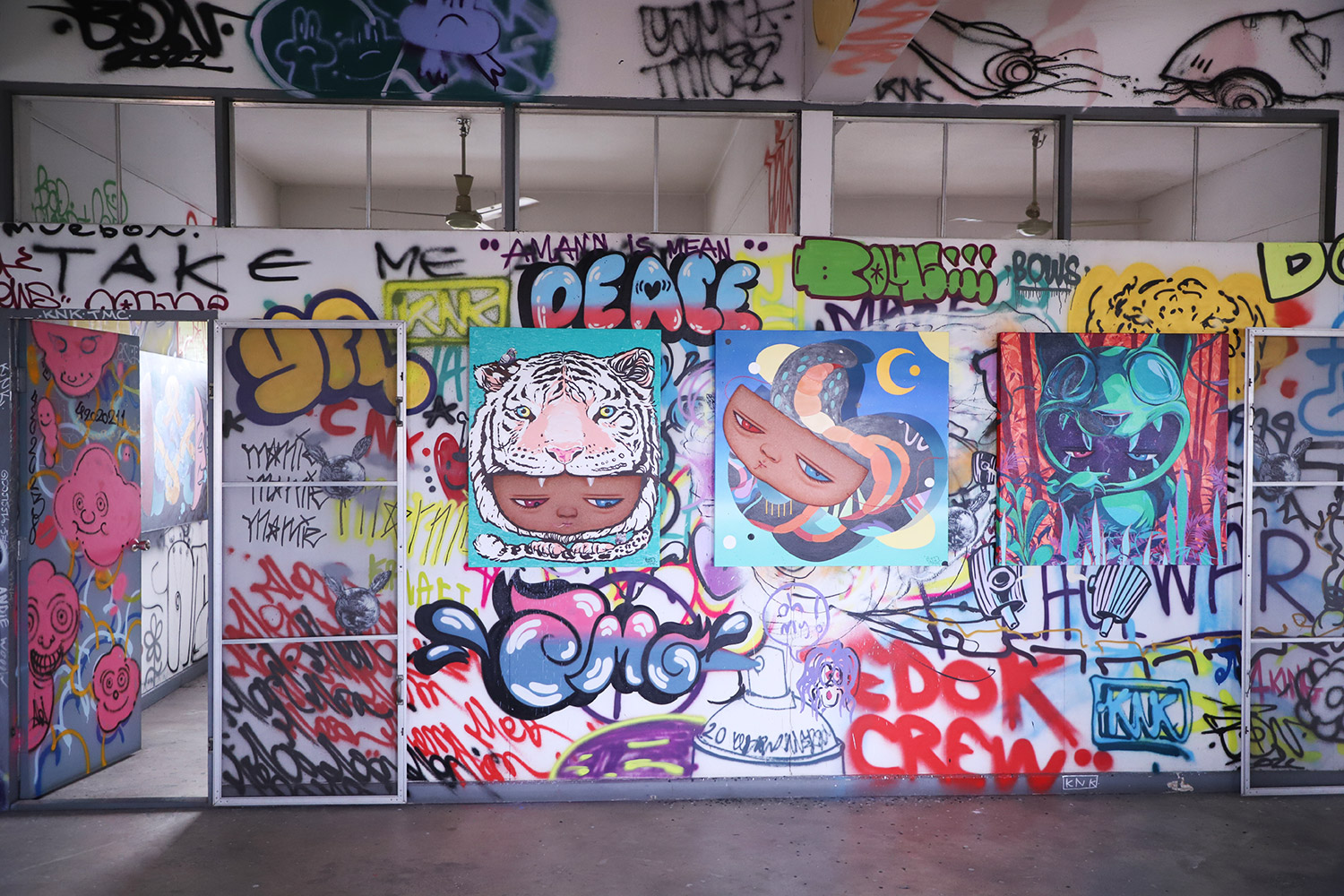 A graphic of half the artist’s face. (Photo: Suwitcha Chaiyong)

"Twenty years is half my life, so I wanted to review what I had done and whom I had worked with. It was not my intention to broadcast my career. I merely intended to show the collaborations between 30 street artists and myself. I wanted to tell stories about the countries I visited and the street artists I met there," he explained.

On the 1st floor of the exhibition, a collection of paintings were created based on photographs documenting street art he created in many countries. Patcharapol explained he selected photos of his artwork he took at memorable locations and made them into paintings. These paintings are similar to the original. They show Patcharapol is a master at drawing realistic paintings in elaborate detail.

"I was asked if I felt any different when working at different locations such as walls, abandoned buildings or art galleries. When I work on art, I want everything to blend together. While working on the reproduction of each painting from a photo, I felt like I was back in the location again. Each painting reminded me of my experience on that day when I first painted the graffiti. I also saw objects that I had not noticed before in the photo. I thought the paintings would serve as the conclusion of my 20-year career, but I actually learned more techniques when I worked on them," said Patcharapol. 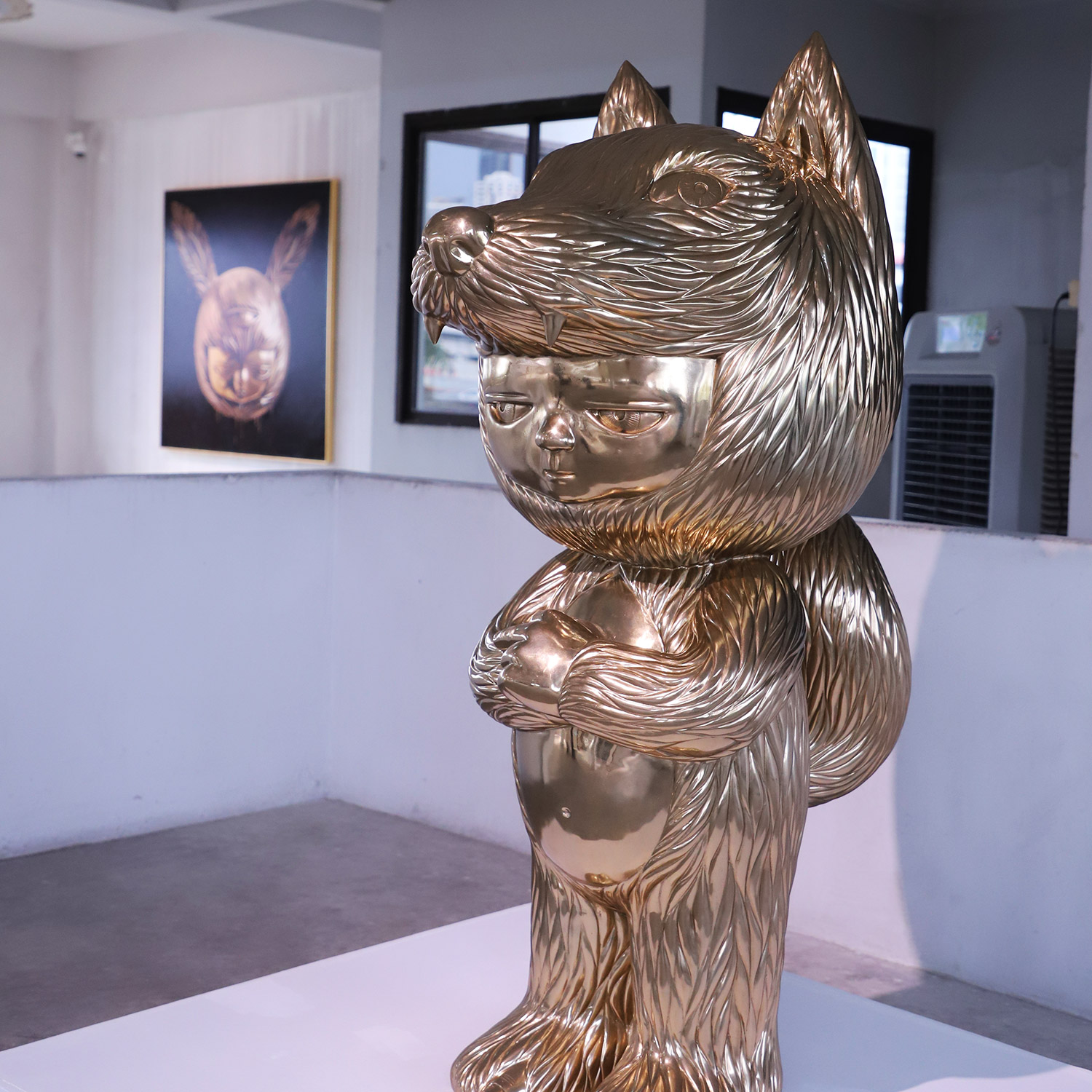 The third-eye character in sculpture form.

On the 2nd floor, there are paintings inspired by impressionist artists such as Water Lilies And Japanese Bridge by Claude Monet, Olympia and The Luncheon On The Grass by Edouard Manet. The other side of this floor exhibits graphics of half of Patcharapol's face, a signature style of his early career. The third-eye character in sculpture form can be seen on the 3rd floor. Sculptures were designed in various poses, sizes and made from several materials. Walls on the 4th floor overflow with multicoloured graffiti and mural art created by Patcharapol and fellow street artists. A rare half-face graphic of Patcharapol also appears on this floor.

"My crew and I decided to exhibit my work in this four-storey building instead of a gallery because it gives a vibe of an abandoned building where graffiti artists gather and freely express themselves through art. Sculptures are displayed because I realised that my art is impermanent since it can be destroyed or erased. I used to think bronze sculptures would stay longer than me. However, I later learned that even a historical monument can be destroyed and disappear if people with power want to demolish it. Therefore, even durable materials do not guarantee a permanent existence," he said. 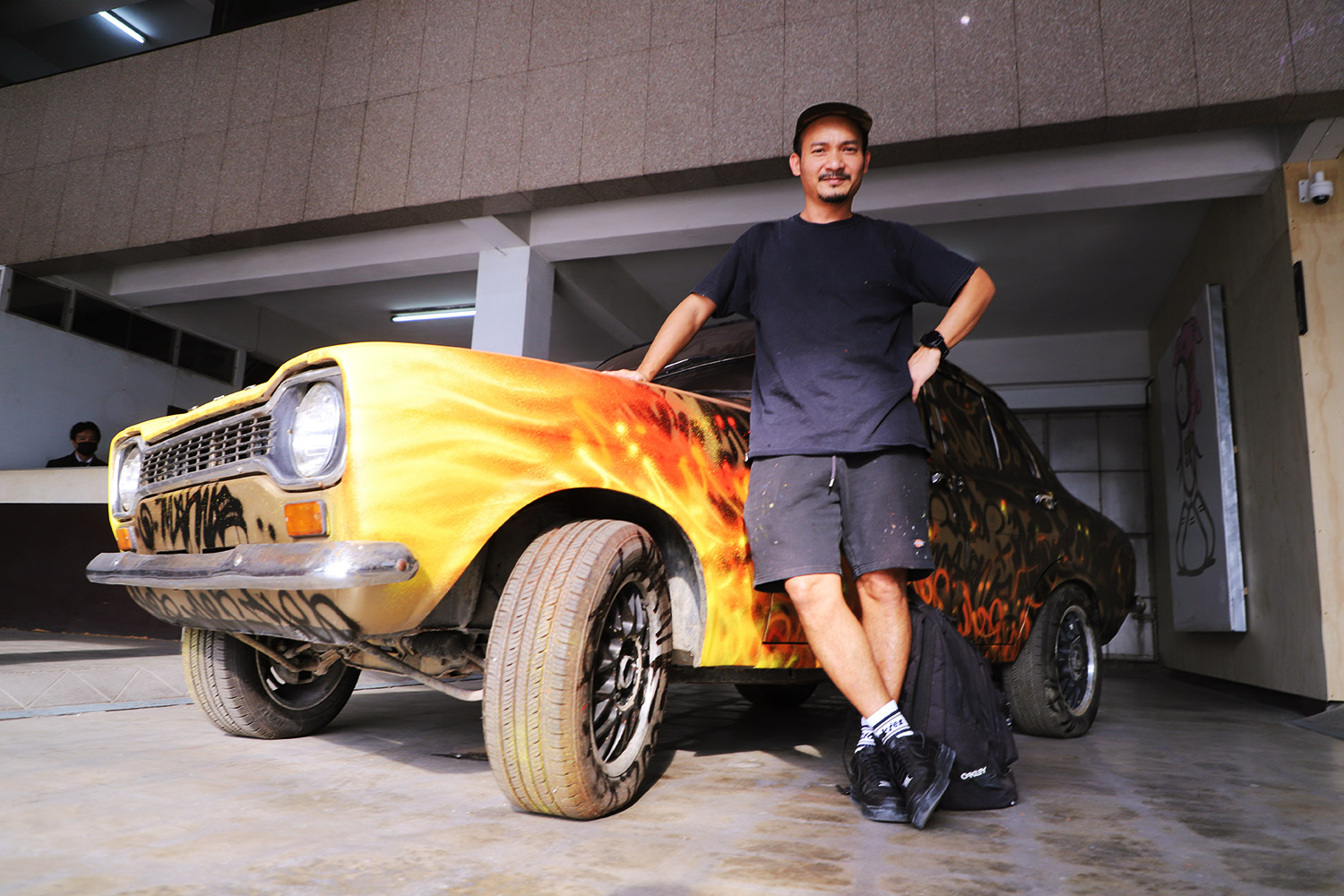 Patcharapol Tangruen first sprayed his pseudonym Alex Face on an old car in 2002.

"The 4th floor displays artwork of fellow street artists who were involved in my creations seen on the 1st floor. For example, Thu Myat, a Myanmar artist, helped me create street art in Myanmar, so I reproduced that piece into a painting that is displayed on the 1st floor and invited him to paint his graffiti on the 4th floor. In addition to local artists, there are Asian, European, and American artists such as Hecto [Japan], The London Police [Netherlands] and Yok and Sheryo [USA]," he added.

Born and raised in Chachoengsao, Patcharapol had a passion for art since primary school. He became more determined in secondary school when his art teacher pushed him to participate in painting competitions.

"I was excited at every competition. I tried my best and had fun. What I learned from competitions was discipline. I practiced after lunch, after school and on weekends. I aimed to participate in national competitions. However, when I entered national competitions I always lost because other students were more talented. Those experiences broadened my horizon," Patcharapol said.

After receiving his bachelor's in printmaking from King Mongkut's Institute of Technology Ladkrabang, Patcharapol jobbed as a freelance artist and continued working on his signature graffiti. There was a time when he questioned himself about his path, but he never thought of giving up. 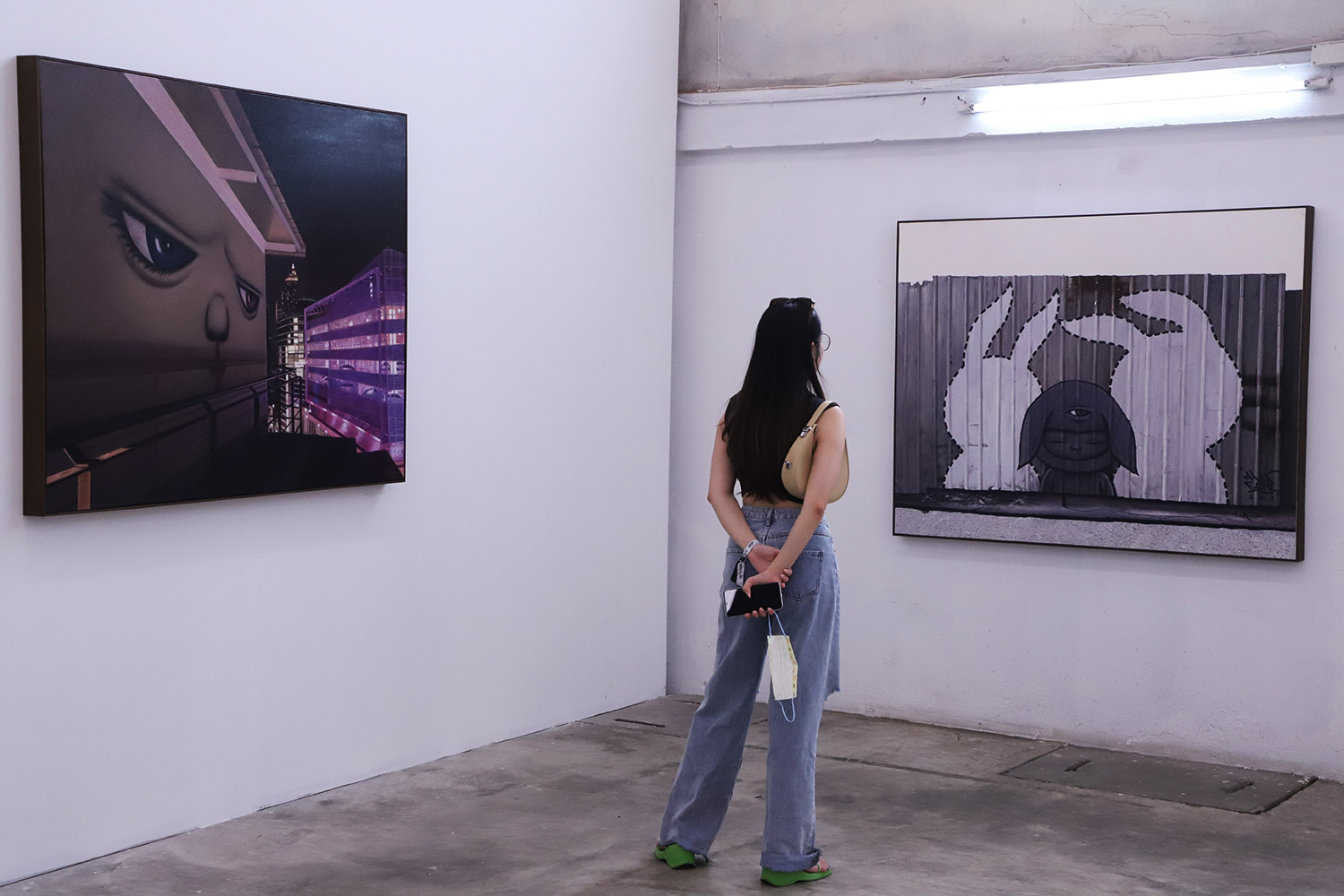 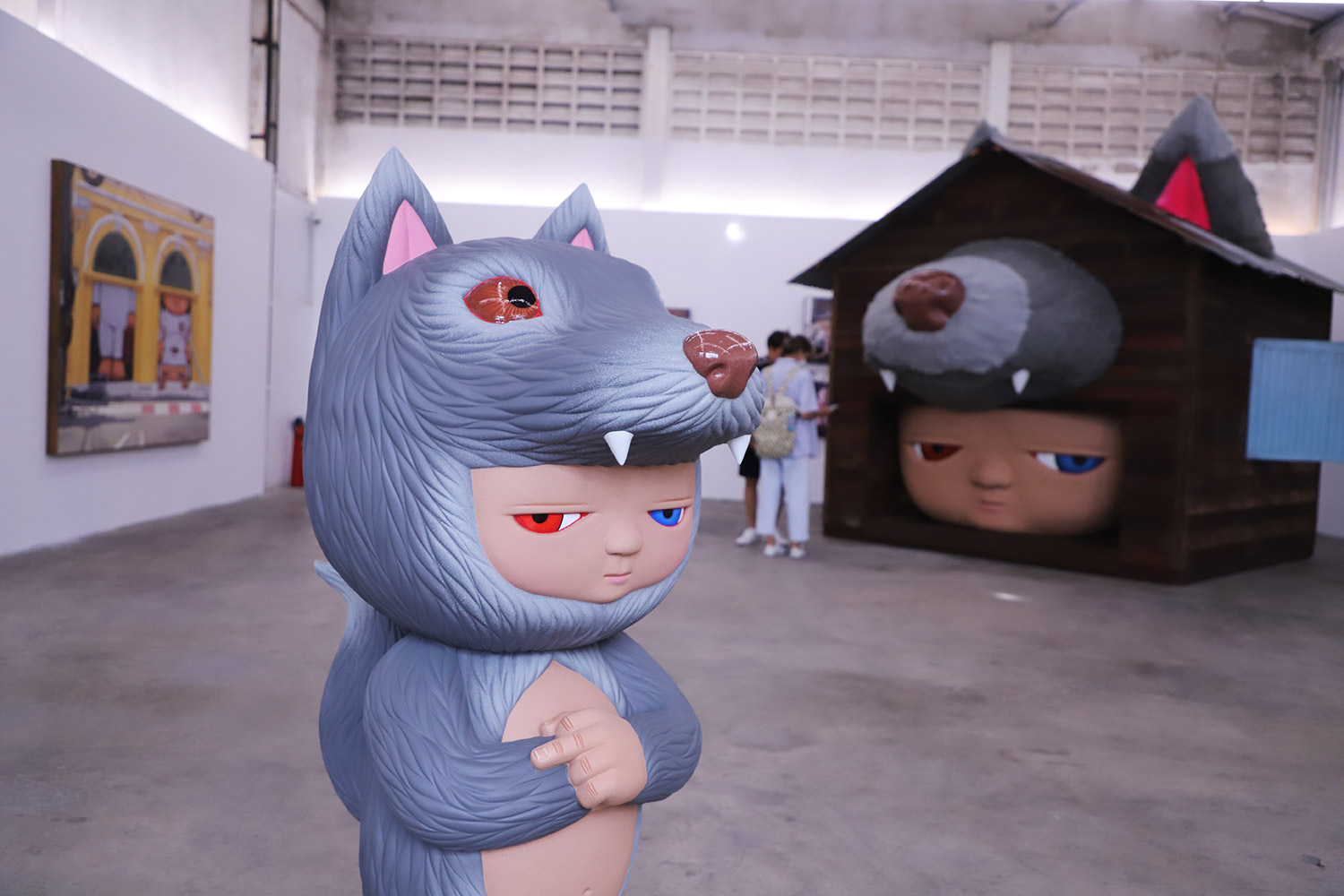 "I never felt discouraged or thought about stopping my graffiti. I sometimes questioned how would I make a living because I spent money on painting materials and transportation, but got nothing in return. However, I did not want to think about it too much and kept doing street art. Deep down, I believed my street art could go far," he said.

After Patcharapol discovered his iconic third-eye character, he decided to challenge himself by aiming for a sell-out exhibition. In 2012, Patcharapol gave his all for "The Underground Adventure Part 1".

"It was my first exhibition with the third-eye childlike character. Unlike the half-face character which did not require much skill, I invested a lot to create the third-eye character. I thought that if I dedicated myself to the exhibition, it might bring some change. I also hoped it would be a turning point. 'The Underground Adventure Part 1' was my first sold-out exhibition that received positive feedback," said Patcharapol.

After show, Patcharapol has had many sold-out exhibitions including his recent "Faces" in Chicago, USA.

"I experienced people lying to me. Due to the pandemic, people still wear masks, so I used masks as a symbol of hypocrisy. In paintings, some characters have many layers of masks while some have double faces. In the business aspect, our team is good at marketing, so all the artwork in the exhibition was sold out. I also feel great that people of different cultures from other parts of the world like my work," he said.

People may think Patcharapol has reached the peak of his career, but the artist said there are many goals that he has not yet accomplished.

"There are many countries and venues that I want to visit and create street art. My work has not been exhibited in a global museum yet. Since people think I am successful, I have to work hard to maintain my standard. I do not pressure myself. I do not think I know it all. I will keep improving myself," said Patcharapol.

"20th Year Alex Face" runs at 127 Na Ranong Road, off Rama IV Road, Klong Toey, until Dec 18. The fee is 350 baht per round and can be purchased from bit.ly/3AtPHfA. For more information, visit facebook.com/bangkokcitycity and facebook.com/Alexfacebkk. 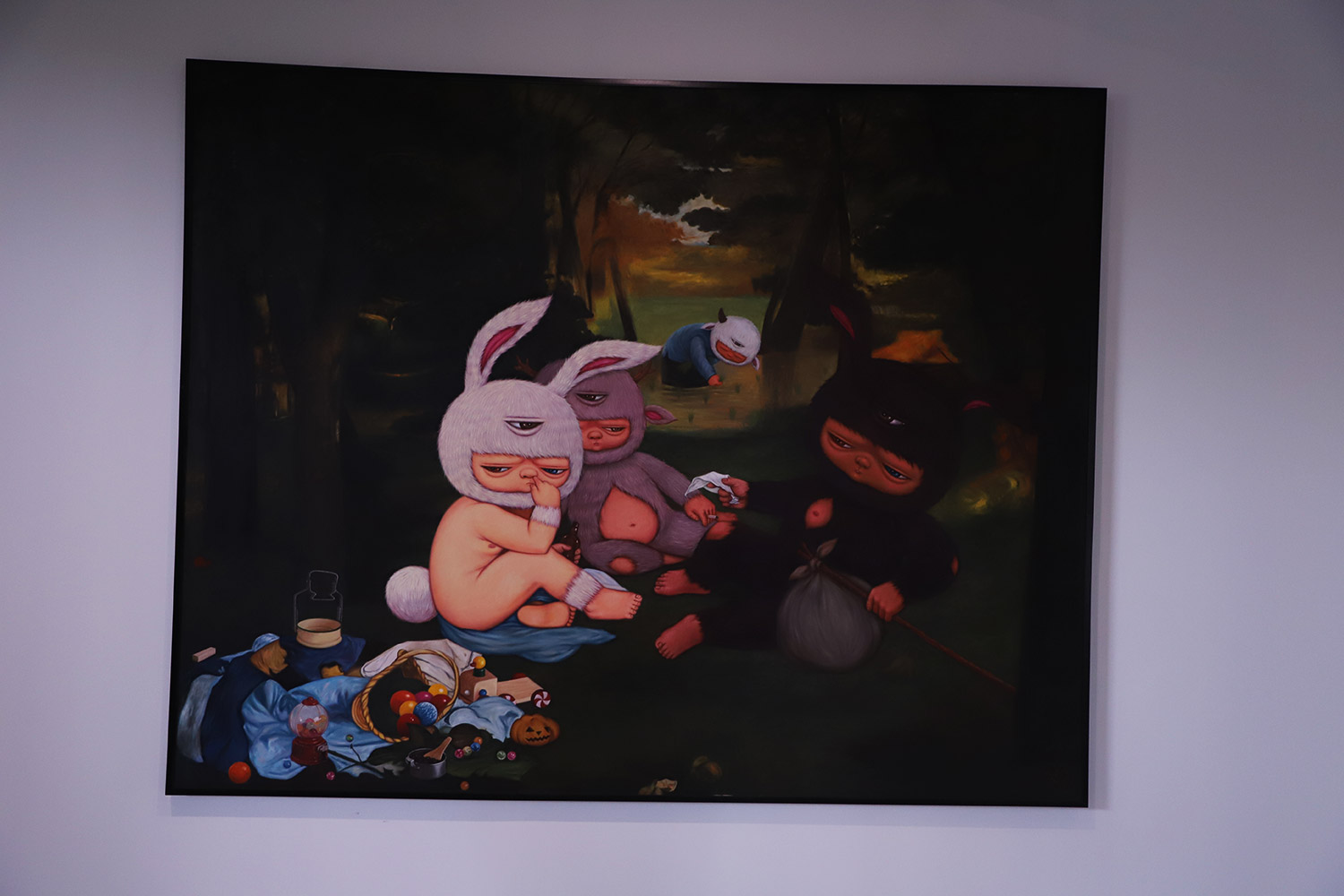 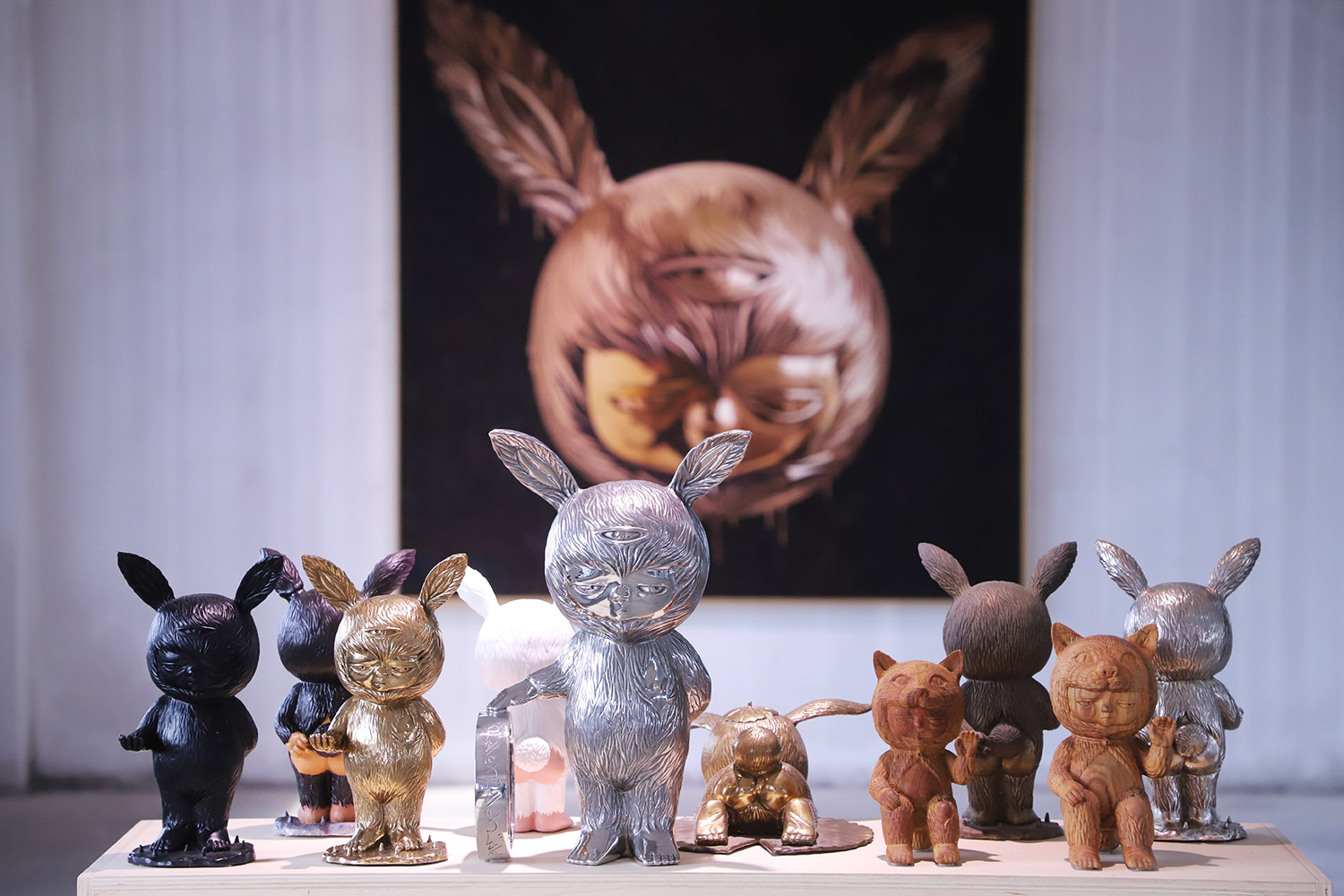 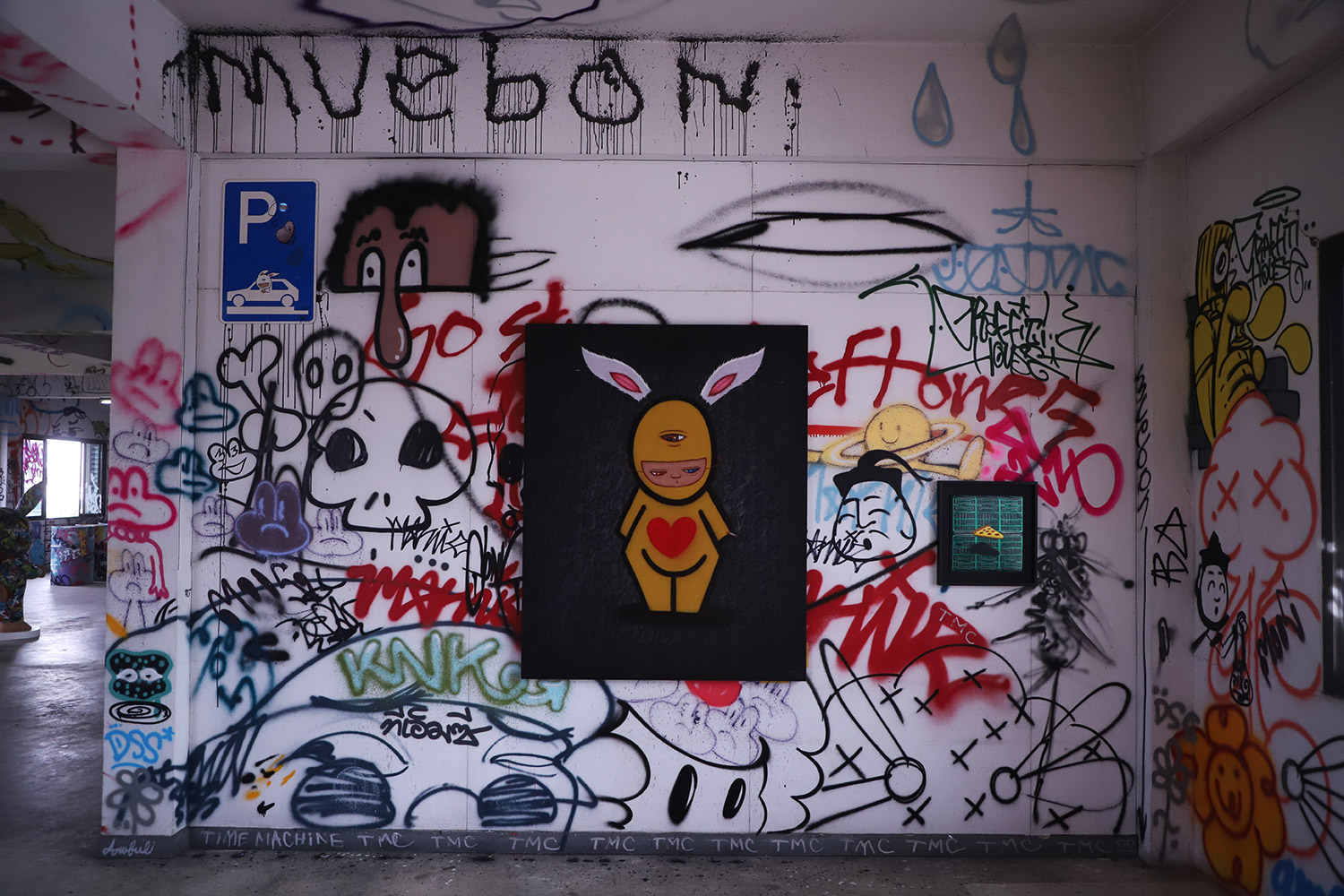 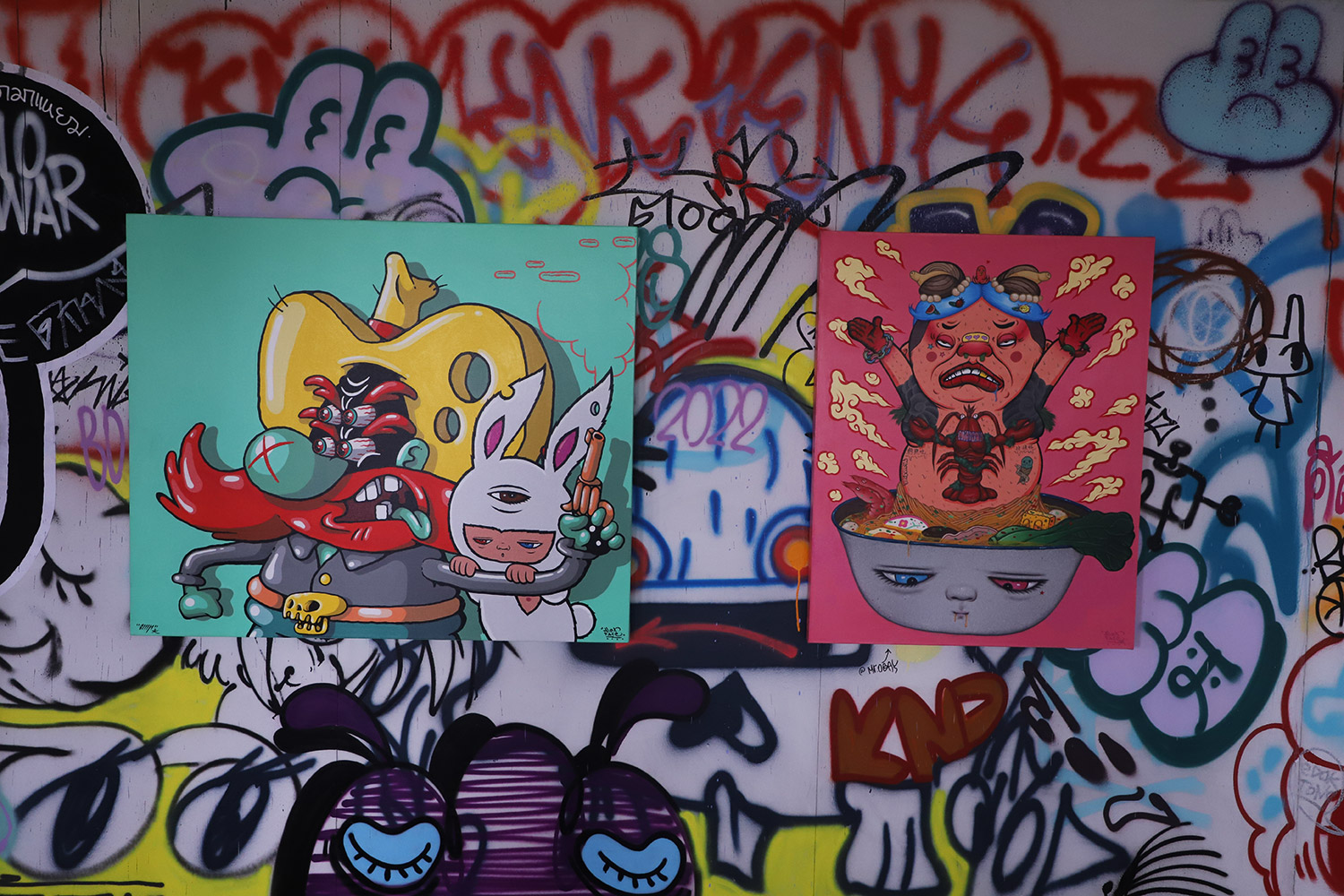