Charlie is a college writing instructor who never leaves his apartment. He conducts his classes online, disabling his laptop camera so the students cannot see him.

The movie camera, guided by Darren Aronofsky and his go-to cinematographer, Matthew Libatique, also stays indoors most of the time. Occasionally you get an exterior view of the drab low-rise building where Charlie lives, or a breath of fresh air on the landing outside his front door. But these respites only emphasize a pervasive sense of confinement.

Based on a play by Samuel D. Hunter (who wrote the script), "The Whale" is an exercise in claustrophobia. Rather than open up a stage-bound text, as a less confident film director might, Aronofsky intensifies the stasis, the calamitous sense of stuckness that defines Charlie’s existence. Charlie is trapped — in his rooms, in a life that has run off the rails, and above all in his own body. He was always a big guy, he says, but after the suicide of his lover, his eating "just got out of control". Now his blood pressure is spiking, his heart is failing, and the simple physical exertions of standing up and sitting down require enormous effort and mechanical assistance. 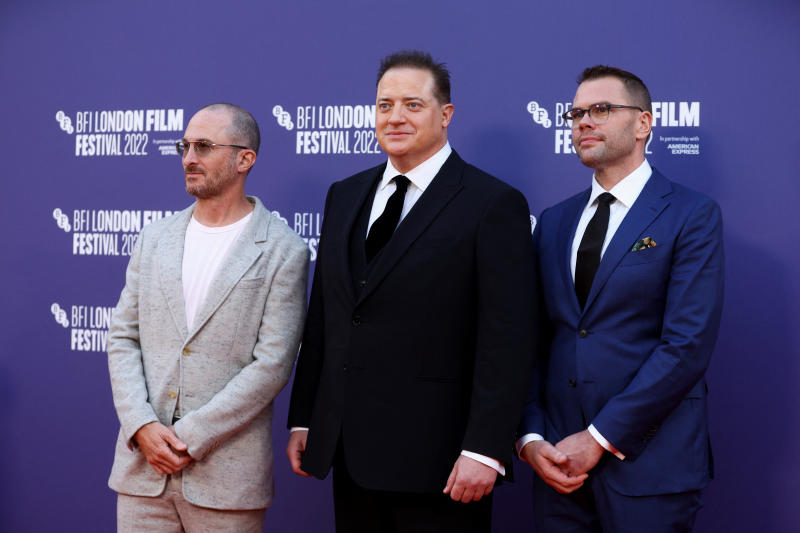 Charlie's size is the movie's governing symbol and principal special effect. Encased in prosthetic flesh, Brendan Fraser, who plays Charlie, gives a performance that is sometimes disarmingly graceful. He uses his voice and his big, sad eyes to convey a delicacy at odds with the character's corporeal grossness. But nearly everything about Charlie — the sound of his breathing, the way he eats, moves and perspires — underlines his abjection, to an extent that starts to feel cruel and voyeuristic.

"The Whale" unfolds over the course of a week, during which Charlie receives a series of visits: from his friend and informal caretaker, Liz (Hong Chau); from Thomas (Ty Simpkins), a young missionary who wants to save his soul; from his estranged teenage daughter, Ellie (Sadie Sink), and embittered ex-wife, Mary (Samantha Morton). There is also a pizza delivery guy (Sathya Sridharan), and a bird that occasionally shows up outside Charlie’s window. I’m not an ornithologist, but my guidebook identifies it as a Common Western Metaphor.

Speaking of which, Charlie is not the only whale in "The Whale". His most prized possession is a student paper on "Moby-Dick", the authorship of which is revealed at the movie's end. It is a fine piece of naive literary criticism — maybe the best writing in the movie — about how Ishmael’s troubles compelled the author to think about "my own life".

Perhaps Charlie’s troubles are meant to have the same effect. He becomes the nodal point in a web of trauma and regret, variously the agent, victim and witness of someone else’s unhappiness. He left Mary when he fell in love with a male student, Alan, who was Liz’s brother and had been raised in the church that Thomas represents. Mary, a heavy drinker, has kept Charlie away from Ellie, who has grown into a seething adolescent.

All this drama bursts out in freshets of stagy verbiage and blubbering. The script overwhelms narrative logic while demanding extra credit for emotional honesty. But the working out of the various issues involves a lot of blame-shifting and ethical evasion. Everyone and no one is responsible; actions do and do not have consequences. Real-world topics like sexuality, addiction and religious intolerance float around untethered to any credible sense of social reality. The moral that bubbles up through the shouting (and the strenuous nerve-pumping of Robert Simonsen's score) is that people are incapable of not caring about one another.

Maybe? Herman Melville and Walt Whitman provide some literary ballast for this idea, but as an exploration of — and argument for — the power of human sympathy, "The Whale" is undone by simplistic psychologiaing and intellectual fuzziness.

Aronofsky has a tendency to misjudge his own strengths as a filmmaker. He is a brilliant manipulator of moods and a formidable director of actors, specialising in characters fighting their way through anguish and delusion toward something like transcendence. Mickey Rourke did that in “The Wrestler”, Natalie Portman in "Black Swan", Russell Crowe in "Noah" and Jennifer Lawrence in "Mother!". Fraser makes a bid to join their company — Chau is also excellent — but "The Whale", like some of Aronofsky’s other projects, is swamped by its grand and vague ambitions. It is overwrought and also strangely insubstantial.