Funky feline pounces in for a party
Life
Arts & Entertainment

Funky feline pounces in for a party 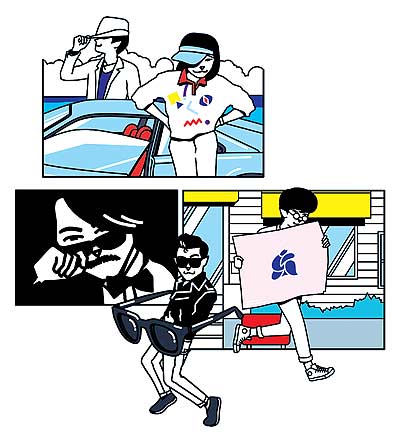 Comprised of an eclectic mix of local and international musicians and graphic designers, Kitsch Cat was originally borne of the shared love of electronic music between Cyndi Seui, Yuri's Nominee and Gramaphone Children (aka Cesar B De Guzman, Peera Sukasuk and Jaree Thanapura respectively). Thanks to indie music blogs and word of mouth, it has made a name for itself as one of Thailand's most exciting record labels. A testament to this claim is the label's 2008 debut compilation, Kitsch Cat No1, a collection of 11 tunes that pay homage to the music of the '80s.

Now, two albums (Gramaphone Children's solo outing Ah-Huh, Ah-Huh, and a special collaboration with Thonglor's club Demo) and almost four years later, the cool cats are at it again with a follow-up release, Kitsch Cat No2. With more recognition of the local scene (finally) and more people on board, the album is as refreshing and diverse as they come.

Take the opener, Yuri's Nominee's Like This. Apart from being the album's only Thai song, it reminds us why we fell in love with Kitsch Cat in the first place. It's a cutesy bubblegum pop tune with fitting lyrics about having a crush on someone.

Cyndi Seui takes things up a notch with the following track, Don't You Have a Feeling, a synth-tastic jam with echoes of French and US duos such as Daft Punk and Holy Ghost! Gramaphone Children pick up the cues, throwing in a fair bit of funk and plenty of lovin' in Just Give Your Love-in.

Interestingly, the album's brightest moments lie in the tracks by the label's newcomers such as the homegrown Aerolips and the Italian/Norwegian duo the Pelifics. Dream of You and Make Believe both have effortlessly lavish melodies that don't require packing in piles of sound effects. While the majority of the album leans towards mid-tempo mellowness, it does finish off with quite a bang. Tracks such as Cyndi Seui's Ever Ready, Stargazer's Memory Machine and Astrolabe's Night Cruising rival each other in the booty-shaking department. Play them loud, put them on repeat and you're guaranteed to have yourself one raging party _ possibly an all-nighter.

Less adventurous listeners may be put off by words such as ''electro'' and ''indie'', however, Kitsch Cat No2 at its essence is simply a pop record that cherishes the spirit of the '80s. It's optimistic, fun and there's not one song on the album that veers away from pop catchiness and listenability. As a continued effort to promote local electro, we think Kitsch Cat No2 is a solid move and definitely a step forward.

Madonna (featuring MIA and Nicki Minaj)/ Give Me All Your Luvin'

The queen of pop returns to reclaim her throne with Give Me All Your Luvin', the first cut off her upcoming 12th studio album. Armed with two strong pop icons, MIA and Nicki Minaj, Madge croons uninspired lines like ''Don't play the stupid game, 'cause I'm a different kind of girl/Every record sounds the same, you've got to step into my world'' to a no-frills pop beat. Minaj is obviously doing her thing, but we wish MIA would be doing more than mindlessly shout-cheerleading and spelling out things such as ''L-U-V Madonna, Y-O-U You wanna.''R Kelly/ Share My Love

After 2010's slightly lukewarm Love Letter, veteran R&B crooner R Kelly returns to form with a new single from his forthcoming 11th studio outing, Write Me Back. Fittingly due to be released on Valentine's Day, Share My Love harks back to the glorious disco era with the kind of cruisy soul backdrop synonymous with artists like Cee Lo Green and George Michael. ''Now that we're in this room/Let's do what we're born to do/Populate, populate!'' cooing over scintillating strings, the King of R&B is still as smooth and raunchy as ever.

Forget her cameo on Madonna's single for a moment because MIA is back with new material. OK, this may not be new in the truest sense of the word since Bad Girls was originally included on MIA's Vicki Leekx mixtape back in 2010. After some studio scrubbing-up, the track emerges as a slightly more polished mid-tempo number coupled with bouncy Middle Eastern beats to boot. The hook may be ridiculously low-brow (''Live fast, die young/Bad girls do it well''), however, without the political agenda found on Born Free or in any of her earlier work, Bad Girls serves up no-nonsense catchiness, thanks to the help of hit-making producer Danja (Britney Spears' Gimme More, Madonna's 4 Minutes to name but two).

Given the split-up of the White Stripes, it only seems natural, not to mention inevitable, for Jack White to go down a solo path. Here, we are treated to Love Interruption, the first taste of his solo debut, Blunderbuss. The track rides on acoustic guitar and electric piano as White makes a bold statement ''I won't let love disrupt, corrupt, or interrupt me'' alongside a female backing vocalist. It's wonderfully catchy with a hint of gospel and folk thrown in for good measure.

With his upcoming album Trouble Man due to be released soon, American rapper TI takes some time out of his busy schedule and lends his expertise to the DJ duo MLK and Scream on I Need Dollas. The track is from the mixtape dedicated to this year's Super Bowl, and it samples the best bits of Aloe Blacc's I Need a Dollar, the anthemic theme music of the recent HBO series, How to Make it in America. TI is still reliable when it comes to delivering slick verses, and, with the overriding dancey hip hop beats, the song's sure to become another dancefloor classic.