It's been a hectic year for local DJ and Zundrangma Records label owner Maft Sai. He's been on successful overseas tours to Europe and Japan with his partner DJ Chris Menist and the pair has put together two excellent internationally released compilations of Thai luk thung music, The Sound of Siam (Soundway, UK) and Thai? Dai! (Finders Keepers, UK). Never still for a moment, the duo's popular "Bangkok Paradise" night returns this month with a one-off concert by the legendary Wong Dontri Molam Theppabutr band to celebrate the event's third anniversary. 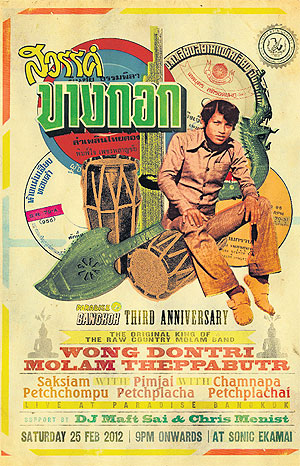 Maft says he's been more focused on molam than luk thung in recent months, spurred on by signing a deal with the famous molam producer Theppabutr Satirodchompu to license molam tracks from his back catalogue. It's taken him several years to persuade Theppabutr to agree but the wait has been worth it. "At first, I liked the faster molam styles," he explained, "but then I heard some of the slower tunes while I was playing at a gig in Tokyo. The sound system was so good, you could hear all these subtle effects and sounds. So I found more of this kind of molam and played it at my shows along with reggae _ it gave me a new perspective and I started 'Isan Dancehall' (his current DJ night in Bangkok)."

He says that there are so many aspects to molam music that are attractive. "You can really feel the music _ even before the music starts, the voice of the molam gives you goosebumps," he said. He says the accompanying instruments such as the khaen (free-reed bamboo mouth organ), phin (lute) and even the production give the music a unique sound.

The particular period he likes is when the modern sound was created and developed during live recordings by originators like Theppabutr, mainly in the early to late 1970s; he searches tirelessly for vinyl seven-inch singles from the period and if you visit Zundrangama Records' HQ and record shop on Sukhumvit Soi 51 you'll hear some of this great but somewhat forgotten music blaring from the shop speakers. 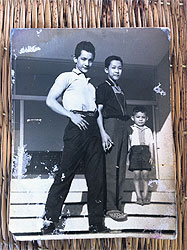 The flyer from the gig and a photo of Theppabutr Satirodchompu as a young ‘Shadow’ (as in ‘Wong Shadow’).

Look out for the seven-inch pressings from the Double-Chicken Number 31 and Theppanom labels, for these are some of the earliest vinyl records of modern molam and they were forged in Theppabutr's studio in Maha Sarakham. I can attest to just how difficult it is to persuade copyright owners to consider licensing in the luk thung industry. I tried it years ago and failed miserably. Maft says that he had to be patient. His dealings with record companies have been mixed; most want huge advances and are not interested in whether international audiences get to hear Thai roots music. "Theppabutr is different. He was a creator not a distributor and he is happy for others to know about this great music."

In addition to the new CD compilation, "Bangkok Paradise" will also feature the launch of a new vinyl seven-inch label of the same name. Great news for fans of Thai vinyl.

Not content with putting out a compilation, Maft wanted to hear the sound for himself, to recreate the glorious sound of one of the best molam bands in the business, Wong Dontri Molam Theppabutr. So he arranged for the band to reform for a one-off gig, rather like the Dao Bandon show he promoted last year (Bandon was also a Theppabutr artist but then many were; by 1972 Theppabutr had formed more than 200 molam bands) but the difference this time is that some of the original musicians like phin player Kummao Perdtanon and vocalist Saksiam Petchchompu, as well as molam duo Pimjai Petchplachai and Chamnapa Petchplachai, will be performing. "It's a great opportunity to see one of the great molam bands play live," said Maft, and not one to be missed. More information: www.zudrangmarecords.com

This columnist can be contacted at clewley.john@gmail.