In rocks we trust

Our boat cut through the dark water in search of light. Salt-sprayed, wind-whipped and guided by shadows, we finally found it: in the lagoon of Kudu Island, a screen had been erected and projector installed. Gently bobbing before it was a floating lounge, a deconstructible auditorium for the castaways who imbibed cinema, hoping (or dreaming) that it were elixir. Soon a beam of light from the projecting tower pierced the darkness and illuminated the white canvas: it was indeed a cinema, and a unique cinematic experience. Hardly men had gone before to such length to enjoy movies. And of course, this is Thailand. 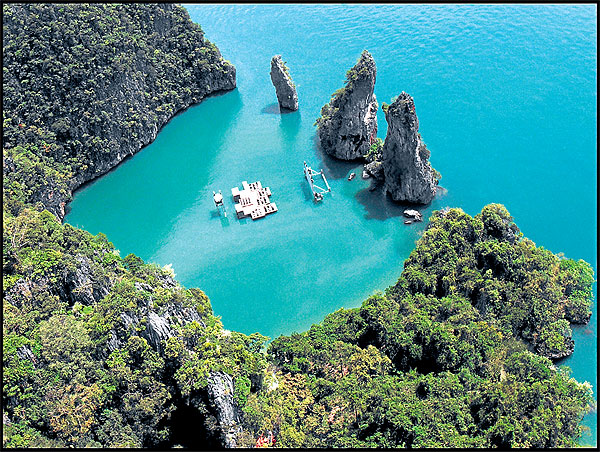 The lagoon near Kudu Island was one of the three screening locations of ‘‘Film on the Rocks’’. The ‘‘Cinema Archipelago’’ was designed by Ole Scheeren.

It was the last night of "Film on the Rocks", an aspiring, inaugural three-day event held last week in and around Yao Noi Island in Phangnga Bay. The host was the Six Senses resort, and the formula was a heated mix of luxury, avant-gardism and surreal dreams. Throw in the jungle, the emerald Andaman and a temple fair assembled in a rice field with a 16mm screening of a Thai horror, and the whole saga could come across as a live, postmodern gallery piece. Looked on from an angle, it was also an experiment on the meanings and implications of cinema art in relation to the real world.

The British actress Tilda Swinton was the force that raised the profile of this first-ever gathering to superstar level. Swinton was billed as co-curator, and she hand-picked a number of films screened over three nights at three  locations with Thai film-maker Apichatpong Weerasethakul, who also introduced other artistic elements. Their passion for movies was palpable _ you can talk to Swinton for hours about movies, old and new, from Narnia to the new Korean sci-fi she'll be shooting in May _ and they brought the feeling of heft and cinephilia to the seaside event that also took pride in parties, fusion food and lifestyle. 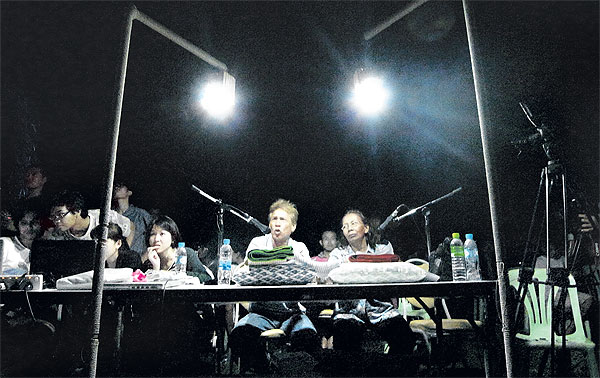 "It's my job to make Tilda and Apichatpong's dream come true," said Nat Sarasas, owner of Six Senses Yao Noi who co-founded "Film on the Rocks" with Chomwan Weeraworawit. It was a dream that included disparate faces and manifestations, from the projection of specially curated experimental films on the beach, a film workshop with local children from the island, a foundation to support young artists, and the aforementioned marine cinema where vintage titles were projected onto the screen in the middle of the Andaman Sea.

By design, art had a whiff of wilderness. On the first day, March 10, Rirkrit  Tiravanija served up an appetiser in the form of an art performance, staged in the verdant inferno of the island jungle and involving a 500-year-old tree, a canvas, spray paints, and a 16mm print of Andy Warhol's film Empire, flown in from the Museum of Modern Art in New York. Baptised No Fire No Ash, Rirkrit's brief vignette of sounds, actions and the palimpsest of text paid tribute to the empire of Nature, with its mysterious and humbling power, and typical of the man's aesthetics, the site-specific "piece" relied on experiential sensory as artists, audience, props and wandering insects shared the same space.

Movie screens, in different sizes and in different surroundings, were a key to "Film on the Rocks". Rirkrit's jungle screen displayed the primordial construction of moving images _ through successive layers of paints _ and back in the resort, young artist Nontawat Numbenchapol's installation, called Aurora, basked the screen in primary colours as the fragments of narrative unfolded in his digital short film. Those two pieces keyed in to the first night of the real screening, which was an ecstasy pill for cinephiles: the beach of Six Senses was transformed into an outdoor cinema, and rare films from the heyday of  experimental movie-making were shown. The best thing _ and the creators of "Film on the Rocks" would receive garlands and gratitude were their effort and generosity repeated in a more accessible location _ was that most films were projected with 35 and 16mm print,  licensed and imported from various museums, galleries and archives in Europe and the US. The screening was smooth, and the print quality was superb. It was one of the best experimental programmes ever presented in the country.

Left: Rirkrit Tiravanija and Arto Lindsay performing ‘‘No Fire No Ash’’ in the forest.

Right: Students on Yao Noi Island screened their short films made at a workshop with the Thai Film Foundation.

For instance, Swinton picked Portrait of Ga, a short by the little-known Margaret Tait, and The House is Black, a dark satire in screaming colour by Norman McLaren. Apichatpong meanwhile picked experimental shorts from the  masters like Bruce Baillie (Valentin de las Sierras) and DW Griffith (the seldom-seen The Unchanging Sea) as well as Dajang Soembi, perempoean jang dikawini andjing (Dajeng Somebi, The  Woman Who Was Married to a Dog) from upcoming Indonesian maverick Edwin. Taiwanese auteur Tsai Ming-liang, who was among the guests, also premiered his new short film, No Form, in which a monk moves in hyper-slow-motion between his zone of sub-conscious and the real, crowded, overloading reality.

"Film on the Rocks" thrived on the virtue of exclusivity, and the second night of the event, when the festival made contact with the local community, was a kind of experiment in itself. The March 11 screening happened in a rice field in the middle of Yao Noi Island, complete with a lively simulation of a temple fair (or in this case, a mosque fair, for the island is predominantly Muslim). The programme opened with five short films made by local students who joined a workshop by the Thai Film Foundation, and the pure guts and blithe simplicity of their endeavours prompted Swinton to salute them in a speech that also welcomed them into the worldwide "company of movie-makers". The children didn't know experimental movies, but their output was the sincerest form of one. (Last December, Argentine film-maker Lucrecia Martel also spent one month working with the local community to make a film; the result, a work in progress, was also screened). 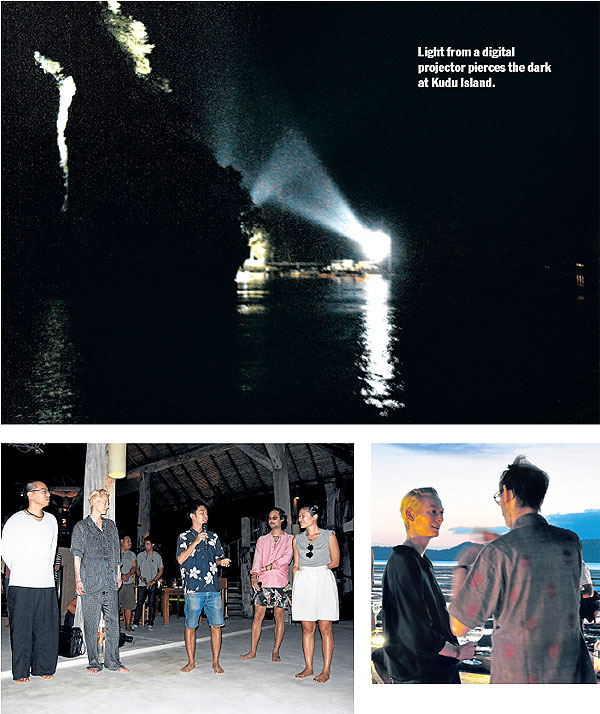 Villagers formed a mass behind the area in the front reserved for the guests; one imagined that a more seamless  integration would've better enlivened the screening of the 1959 Mae Nak Prakanong, the earliest film version of our famous ghost yarn. It was a silent movie, and the screening, with the support of the Thai Film Archive, followed the tradition of the 16mm era by featuring live dubbing performance. This was a fresh experience for most viewers present, and the two dubbers, boated in from the mainland, became the stars of the night. The effort to reach out to the community showed such great potential that we only hope the festival would continue to do it, even intensify it, in order to make it a complete and successful experimentation.

The audacity of "Film on the Rocks" was manifest, of course, in the dramatic screening on the last night in the Andaman. To picture the kind of effort spent in imagining, preparing and making  absolutely sure that everything would run slickly was like picturing the building of a mini-pyramid. Crazy, and beautiful. The centrepiece of the final screening on March 12, which took place near the craggy Kudu Island, 20 minutes by speed boat from Yao Noi, was a modular raft designed by architect Ole Scheeren. Seating more than 100, the steady, floating, aquatic living room, facing the movie screen, was built during low tides and sent bobbing when the water rose; his inspiration, said Scheeren, was lobster farmers' equipment. Only that this marvel is said to have cost more than one million baht.

The programme of the night, again, was rare films: the 1903 version of Alice in Wonderland, an edited clip of the Titanic reportage (something to do with watery woes!) and the 1924 Peter Pan.

But as impressive as in medio aquarum cinematographico was, the strongest feeling of the night was that we were dwarfed by the might of the surrounding nature _ the looming shadows of the outcrops, the impenetrable darkness behind the screen, and the invisible forces more primitive than the human need for moving images. Sitting there watching atomised light hitting the canvas, we felt the exhilaration, the thrill, mixed with the undercurrent of mystery, and even fear. The movie screen, a recurring motif of this three-day event, became the border between this man-made world and the spiritual, the preternatural and the realm of the unknown inhabited only by the real owner of the place. The night was one of the grandest experiences, and also the most humbling. We'd arrived small, and we left the rocks even smaller. If that was the final lesson, then this deluxe, unique and surreal experiment was complete. At least until the next one begins.