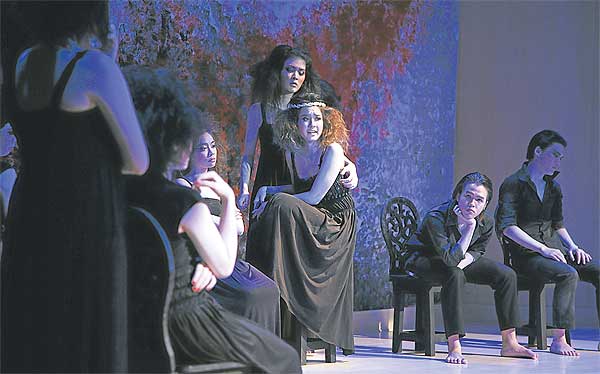 This may be Pattarasuda's boldest move with opera. She debuted with Mozart in Mischief, in which the young director strung together three scenes from three of Mozart's operas. For her second production, she sliced Donizetti's II Campanello and Battista's La Serva Padrona into pieces before stitching them together into one opera. With these experiments, Pattarasuda was mostly busy with giving the operas a young and sleek physical makeover while retaining the common interpretation of the music and the story.

Dido and Aeneas, however, has opened up new possibilities for her.

"I prefer it to Italian opera," Pattarasuda says of Baroque opera. "I like the sound more. The librettos were written so loosely that you get inspired more or you can connect your own dots more. Even with the prologue [in Dido and Aeneas], it's just a statement of something, and then you can just guide the audience in the direction you want them to go."

Pattarasuda first directed Dido and Aeneas for Silpakorn University three years ago. In this new production of Purcell's masterpiece, Pattarasuda pays closer attention to the psychological truth of the characters and portrays their relationships in a way that better reflects contemporary ones.

This production also marks her first collaboration with Israeli conductor and Baroque specialist, Shalev Ad-El, whom she met last year when he came to Thailand to conduct the Bangkok Symphony Orchestra (BSO).

The up-and-coming director sits down with the seasoned and exuberant conductor who proves that openness and experimental spirit also comes with age, experience, and opera.

Pattarasuda: I've been meaning to ask you. Before I even told you about my ideas, I never had the chance to ask what your interpretation for the music was. And it's the first time you've conducted it as well. So how did you approach this piece?

Ad-El: I see the role of the opera conductor in general as secondary. It's not like I come with the interpretation. The direction, for me, is number one. So there's the story, then there's the interpretation of the story by the director, then there's the music that should [be adapted] to fit it. It's very exciting because the music is changing completely. I think coming in with a musical idea is not necessarily beneficial. In one scene, the shadows become witches. It's wonderful. It's amazing. So the musical interpretation has changed according to this.

Pattarasuda: Originally this part was just sung, but we decided to have the human sounds transform into humans.

Life: Have you ever worked in this way before?

Ad-El: I've done a couple of operas with different directors. Every time, there's this communication _ it goes both ways. For example, in the prologue, there was this part where we needed to help the singer sing more beautifully, so [Pattarasuda] added some movement that would help them sing. I need her. She needs me to support her musical ideas.

Pattarasuda: I think we have one thing in common. I mean, we don't just stand and sing. It has to be the whole communication and storytelling, otherwise it's just boring.

Ad-El: Yeah, I wanted to talk about this Belinda thing. Did you have this idea before?

Pattarasuda: It started with the casting actually, because the singer who plays Belinda can look quite mean. She's very pretty and has a great profile. I worked with her in The Threepenny Opera. She was successful at playing a mean character. Then you have this other performer playing Second Woman, who looks innocent _ blonde, beautiful, angelic. Suddenly we have this three-sister kind of thing _ [Dido, Belinda, Second Woman]. I couldn't help noticing the contrast between the actress playing Belinda and the one playing Second Woman. So I made Belinda the evil one. Three years ago, when I did this opera, there were three sisters who really loved each other.

Life: This is a pretty physical interpretation of the opera.

Pattarasuda: Three years ago it was this physical or even. In the Overture, [the singers] were actually so busy, much busier than this time. And they were doing movements while singing. The music is so modern. It's very old, but at the same time, it makes me move. When I first listened to it and studied the text, I couldn't help moving.

Life: Opera training, has it gotten more physical? Before, we used to see operas that were more ...

Ad-El: I'm trying to separate these things because there are many little things, but in the end, we all try to express a common kind of thing. But the choir singing in general is very different than solo singing. In this production, most of the chorus members are soloists. They're less trained as choir singers. So to achieve unity and the same kind of sound production, they have to give up 40% of their personality, of their technique even. It's a process that could happen everywhere, not just Thailand. In Europe and in the US, people grow up much more with this music. It's part of the culture. Every school has a choir. Not so many people make it to soloists. Here, there's an opposite problem. There are really great singers. I had no expectation. And they're really young people with beautiful voices.

Pattarasuda: In this show, it's the chorus who sings more. They're there the whole time. So it's great training actually for young singers in Bangkok: You're onstage, and you have to be aware of what's happening around you all the time. You can't just be in your own little world and sing your own thing.

Life: You've directed a few operas. You used to put modern visual spins on operas, but this time you've made more drastic changes.

Pattarasuda: I think it gets bolder and bolder every time. The second production, II Compenello, I just cut the opera into four pieces and put another opera in between.

Life: But you didn't change it musically. You just cut and pasted?

Pattarasuda: I changed it in terms of plot, but I didn't change the interpretation. The opera that I inserted in between was La Serva Padrona. They just linked in terms of storyline.

Ad-El: These operas, they've never been recovered in their entirety. So it's only an assumption. In Baroque, things were much more flexible than they're considered to be today. Handel, for example, worked in the middle of the performance sometimes. It was very flexible. This is how you create.

Life: You teach as well. Do you teach students the same way you approach music?

Ad-El: Teaching today is really ridiculous and useless. Institutions today do not really allow people to become better. In the Baroque time, composers and students just met and made music. The students worked in music from the first moment. They never learned how to do it. They did it. This is the only way I feel I could give something or get something. It's like a communication. Like our work, I came with an idea. I know the music. She knows so well what she wants. And it was a kind of discussion. I consider myself a student and a teacher at the same time.