Love and other nightmares filled the first half of the 65th Cannes Film Festival. There's post-Revolution love from Egypt, and the love that finds its final destiny, as love should, in death. There are the usual sidekicks of love, such as loneliness and the desire to be recognised, in the heart and in the flesh, in one's own territory and in others. It's both helpful and futile to try to find a common theme in the competition titles at the most frenzied and influential movie festival on Earth, but please allow me to indulge in the activity as a cure to the unusually wet weather that has rendered the mood rather gloomy in this war zone of film criticism. 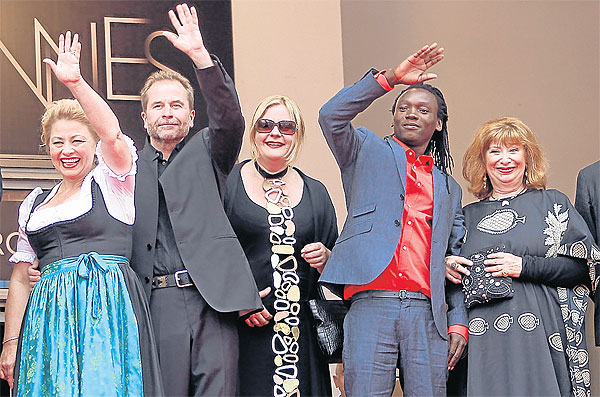 Journalists arrive in Cannes just like solders arrive at a trench battle, and the cold spring rain that soaked the famous red carpet has made the analogy even more fitting.

Expectations are habitually high at Cannes, and as of Monday nothing succeeded in flooring the critics. By the same period last year, Cannes had already screened The Tree of Life, The Artist and We Need to Talk About Kevin, which went on to become some of the highest-profile titles of 2011. This year, thus far, European auteurs delivered the foreplay that has yet to generate genuine sizzling action. The American big hitters will start punching today (see our updates on the website), since so far, John Hillcoat's Depression-era gangster flick Lawless fell pretty flat. From Asia, the harvest is pithy, and the only Korean film that has already played in the competition was a mild success.

That film is Hong Sangsoo's Da-reun na-ra-e-suh (In Another Country), a wry study of loneliness and the belief that meaning always lies somewhere else, perhaps in the real and metaphorical land apart from one's own. Exemplifying the global hybrid of cinema, the Korean movie stars French actress Isabelle Huppert in the lead (she plays three characters). Shot in a crummy seaside town _ a Hong's speciality _ the film isn't about the clash of culture but of perception, of the foreign and the familiar; Huppert plays three versions of Anne, a French woman who's looking for a lighthouse that may not even exist, and her encounters with Korean men in the successive episodes of the story slowly reveal her hopes and desires, which again she may not even be aware of. This is a human comedy, and like any good human comedy, it's tinged with longing and pathos.

Hired love and a foreign land result in a more curious film _ and the source of great bewilderment among Cannes participants. Like Someone in Love was directed by Iranian Abbas Kiarostami, and it's set in Japan and starring Japanese actors, a useful example of how it's getting increasingly difficult to classify movies by nationality. Kiarostami, still a towering figure in his 70s, is a respected veteran who professed deep philosophising in his early films such as Nema-ye Nazdik (Close-Up) and Ta'm e guilass (The Taste of Cherry) _ his previous film Copie conforme (Certified Copy) was a modest hit in Bangkok _ and in this formally weird yet curiously engaging film, he seemed to try to capture the vibrations of the Japanese urban vibe through interactions, movements, and lengthy dialogue (that he, as Iranian, didn't understand).

The story is about a college girl who moonlights as a prostitute and her meeting with one of the clients, an ageing professor of sociology. Like Someone in Love has a great opening shot and a maddening last one; it is a tease, an experiment, and its seeming incomprehensibility has made it the easy target of critical hatred at Cannes (there were boos and the resentful caveat that Cannes could never refuse to screen movies by brand-name directors like Kiarostami, regardless of the quality), but as Cannes has never failed to inspire, this will be the film that people will seek out and discuss in the months to come.

Darker love, like conspiratorial clouds, lurks elsewhere. One of the most expected titles here is called just that: Amour, or love, is the latest film by Austrian master Michael Hanake. The shock factor is minimised here, and Amour is surprisingly tender and low-key in its portrayal of the cloistered life of an old French couple facing the final test of their love when the wife falls ill with a terminal disease. But this is a Hanake film, and our knowledge that something frightening and emotionally wrenching won't be left out of the playbook is soon realised, bloodless and hushed this time. Tears are shed (a good and bad sign), and a closure comes in the form of a wandering pigeon. It's not hard to put the film as a frontrunner of the Palme d'Or. 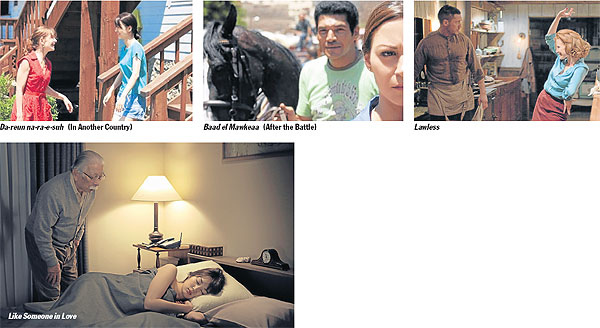 Amour is not the only film that brandishes the word "love" up front. But "love" assumes an extreme and alarming hue in Ulrich Seidl's Paradies: Liebe (Paradise: Love); when those two words are strung to make a movie title, you know that what happens can neither be paradisal or lovely. Seidl, as usual, digs into the underbelly of European guilt and bourgeoise weaknesses (his reading list may include Michel Houllebeqc); in Paradies: Liebe, a middle-aged Austrian woman travels to Kenya on vacation and soon adopts the lifestyle of a sex tourist. The musical chair of exploitation _ the visitors on the locals, the locals on the visitors, with the locals winning, because they don't believe in paradise bur probably only in hell _ becomes the projected image of post-colonial dream and fantasy and the dynamics of human relation at its most cynical tangling. Paradies: Liebe features several scenes of extreme awkwardness, including one in which four not-so-young women compete to get a young black man to have a hard-on. Maybe Seidl would consider making his next film in Thailand.

Class and love also clash in Baad el Mawkeaa (After the Battle), an Egyptian drama by Yousry Nasrallah set after last year's anti-Mubarrak protest. When a fashionable NGO woman falls for a rough horse-riding man embittered by the middle-class uprising, romance is not just impossible but also thornily politicised. A stolen kiss in the desert won't make an equal society. While the film is too unsubtle to exert any real impact, its subject matter is so topical and somewhat analogous with Thailand that I found it worthy to take note _ and to convince festival programmers in Thailand perhaps to consider bringing it home.

Cannes didn't plan this for sure, but the spectrum of love is so diverse and unpredictable at least during the first half of the 12-days festival that ends on Sunday. Besides the Competition films, we also saw the murderous love in Lou Ye's Mystery, showing in the Un Certain Regard sidebar, in which a man spreads his feeling among too many women and eventually becomes a lurid symbol of amoral nouveau riche of new China. Another hit in the Un Certain Regard is the 159-minute epic love story Laurence Anyways, by the 22-year-old Canadian wunderkind Xavier Dolan. This is a strange and tender creature: Laurence of the title is a man who decides one day to become a woman, and his troubled relationship with his girlfriend (also a woman) becomes the most intriguing gender study in the entire festival. It's not a "gay film" in that literal sense, but something that tries to represent the wondrous fluidity of sexual and human feelings. Dolan's style is a tad too florid for my taste, yet again, this is the director's worthy attempt to tackle a more adult issue, and I hope Bangkok festival curators will try to bing it here.

In the second half of Cannes, it seems that romance will have to give way to something else, like violence and apocalypse. Brad Pitt has arrived with his director, Andrew Dominik, to show Killing Them Softly, a crime noir about a poker game gone bad; and Robert Pattinson is in David Cronenberg's Cosmopolis, a limo trip through Manhattan hell.

We'll keep you posted on our website, since many films showing in the second half will be released in Bangkok. Meantime, we'll keep watching and prophecising, and of course it's not foolish to rely on something as delicate as wayward as love.

The oldest director who has a film in Competition this year is Alain Resnais, 86, a living legend who made the modernist masterpiece Hiroshima Mon Amour, back in 1959. Resnais is here, white-haired and red-shirted, and the name of his new film based on the play Eurydice _ about the love that lives even beyond death _ props up our hope in Cannes and in cinema as a whole. Vous n'avez encore rien vu (You Ain't See Nothing Yet), the title reads. Let's pray Resnais is right.