FOUR THAI ARTISTS PARTICIPATE IN THE LATEST EDITION OF dOCUMENTA, ONE OF THE WORLD'S MOST PRESTIGIOUS ARTSHOWS CURRENTLY TAKING PLACE IN GERMANY

As if in the myth of Pygmalion and Galatea, the kiss of art has transformed the German town of Kassel into a living being. The dOCUMENTA (13) exhibition, orchestrated by director Carolyn Christov-Bakargiev, opened on June 9 and marked a return of the intellectually challenging festival that is a beacon of contemporary art which takes place once every five years. 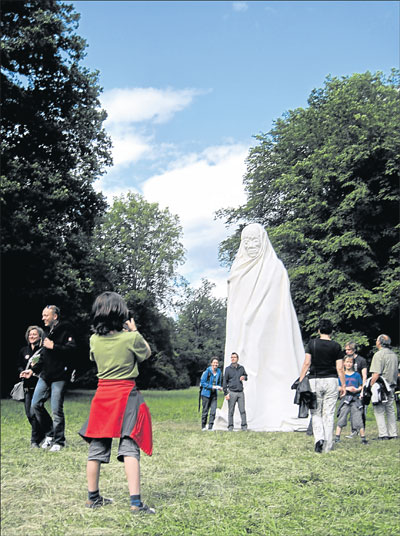 The Importance Of Telepathy, the five-metre-tall sculpture by Apichatpong Weerasethakul and Chai Siri at dOCUMENTA (13).

This time, the show was even bigger compared to the previous editions; the baroque Karlsaue park in Kassel is a new venue where small wooden houses and the latest installations by international artists play against the backdrop of a river, large trees, animals, and rows of mythological sculptures.

Four leading Thai artists have been invited to participate in the event that brings together 150 artists from 55 countries _ Araya Rasdjarmrearnsook, Apichatpong Weerasethakul, Chai Siri, and Prachaya Phinthong.

Each of them last week unveiled their latest works _ conceptual, teasing, provocative _ to the scrutiny of the crowd and art critics who gathered from around the world.

Representing Thailand, the quartet, luckily enough, aren't trapped in a mindset to present or interpret the so-called "Thai identity" _ that's the job of a beauty queen. Instead, Araya, Apichatpong and Prachaya invite us to break the frozen sea of perception; their depiction of what we may call "normal abnormality" touches the audience both through its objectivity and its content.

Conceptual maverick Prachaya Phinthong presents two sleeping (and hugging) tsetse flies on a white plinth underneath a thick cube glass cover _ he calls it Sleeping Sickness (2012). This is a piece with a quasi-anthropological framework based on the artist's research in Africa, particularly in Tanzania, Ethiopia, and Zambia. Prachaya's work is a process of experimental research which blurs the borders between art and real life.

The tsetse flies _ a species found in the Saharan Africa _ are literally sleeping as well as metaphorically referring to the "sleeping sickness", the malady caused by those slumbering insects that sometimes ravages the people of the Dark Continent.

Two sleeping tsetse flies give no clues, on the other hand, and they allow excessive and endless interpretation _ the work doesn't speak for itself unless it is nurtured by the text on the wall. 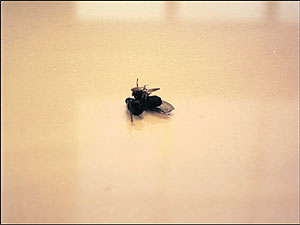 Is visual art not sufficient? Or can't visual language work on its own? The question of visual and textual language is still relevant, especially since most of the works are in Fridericianum Museum where most of the exhibited pieces still rely on the visitors to "read" the text more than just "see" them.

The Karlsaue Park offers a different personality from the Fridericanum _ a grand white cube as well as a form of institutionalisation. The open space of the park stretches the possibility of art and, at the same time, requires our ability to interact with the environment as we walk around taking in the pieces.

Can the enormous white ghost titled The Importance Of Telepathy, a sculpture co-created by by Apichatpong Weerasethakul and Chai Siri, take us to achieve this plain of consciousness? The 5m-high ghost figure in white contrasts with the green grass and dark forest. It attracts all passers-by _ the invisibility of phantoms has been solidified into a towering figure.

Many of Apichatpong's works _ he's best known as a film-maker with an experimental edge _ concern mythical stories and the elusive existence of spirits, which he has tried to visualise in film. He does that through sculpture this time.

"Film is transient, an illusion. The belief of phantoms I have is very concrete, so I solidified it. It may be seen as a haunting object," said Apichatpong.

It would be dull to simply see a solid and touchable ghost standing in the forest. The telepathic power of of The Importance Of Telepathy extends to the surrounding 20m radius, as 150 baked-clay wind chimes are hung randomly and invisibly on nearby trees. Only their lovely sound drifting through the wind amplifies the visual impact of the white ghost we confront.

It is a paradoxical moment: people cannot see but hear visible objects, while an invisible object becomes so massively clear in front of our eyes. As well as chimes, 30 army hammocks are tied with the trees waiting to be occupied by the audience. Chai Siri added: ''It's about the story of our home, so we brought the voice from there. Chimes are replicas of dolphins' bells we have at home. Army hammocks as well, we wanted to simulate a cinema atmosphere where people can dream and release their imagination.''

The installation is successful in terms of visual art.

The mythical object at the heart of the Baroque Karlsaue park is entirely amusing to people. It is also compatible with the white statues we see in the park, or the marble sculptors in the Orangerie, or even a reminiscence of the dark forest in Brothers Grimm tales _ all stories are implicitly woven together.

Looking beyond the artistic content, Apichatpong said: ''I want people to reflect on the political atmosphere in Thailand, where things are made invisible and immaterialised. Victims of political violence abound, and we have a lot of ghosts in Thailand. We've been living with ghosts.''

Not far from the phantom there's a house. The isolated structure with 3m-tall white fences under the shade of big trees is the place where Araya Rasdjarmrearnsook will be staying with her black dog, named Ngab, until the end of June.

This is Araya's exhibition, and it's called: Village and Elsewhere: In This Circumstance the Sole Object of Attention Should be the Treachery of the Moon.

The house is locked, thus people can only observe from the outside _ they curiously peer through the high fence, inside the white-haired woman and her black dog live.

Asking for donation for stray dogs in Thailand is part of this work; it is called DOG-umenta. It's a mockery of the name of the grand art festival as well as a parody of the strict manner of being in the high-art status. Araya _ a lecturer at Chiang Mai University and a unique conceptual artist who once read poetry to corpses in her study of death and flesh _ is well-known as an ardent dog lover, and this time she recruits one of her pets as part of the show.

Two boxes are placed on the front and right side of the house, and there are two video installations attached on each side of the wall. The donation is substantial so far _ the hilarious question comes when people ask if they're donating for stray dogs in general or a dog in the work of art. The question needs no exact answer, the charm when life interacts with art is that the message can be unclear yet funny.

One afternoon Araya stepped out of her white-fenced house to ask for a donation for stray dogs at Fridericianum Museum, and her action inspired mixed feelings. The purpose, however, is not at all money, but confrontation, and her act was interpreted according to individuals' perception.

''No private space entirely separates from the public one,'' she said.

dOCUMENTA is an event created in the post-war period of bustling modern art movements, and due to the lengthy gap between each edition _ five years _ sometimes it's referred, quite crudely, as the Olympics of Art.

The participation of Thai artists signifies the importance of the Thai art scene in the flowing currents of the world's artistic activities, and as Apichatpong's ghost, Araya's dog and Prachaya's flies greet the international visitors, it's time to make sure that Thailand doesn't suffer from the sleeping sickness that sometimes plagues our own art world. 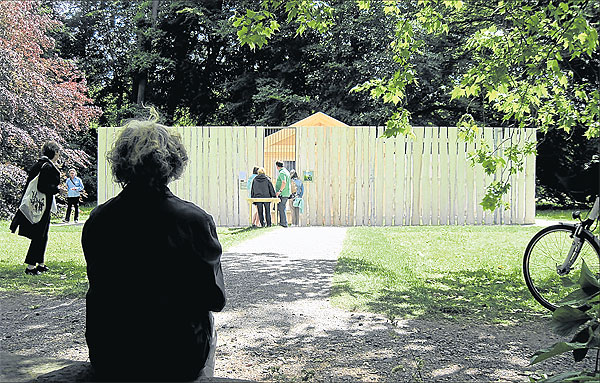 Araya Rasdjarmrearnsook’s installation work is a fenced house in which the artist lives with her dog. PHOTOS: JUDHA SUWANMONGKOL