To mark the 80th anniversary of Thai democracy, we look at the relationship between Thai movies and the democratic ideal

Eighty years ago, on June 24, 1932, the People's Party seized power and transformed Siam from an absolute monarchy to a constitutional democracy. A film crew recorded the historic revolution of that day on 35mm film, and the "movie" went on tour around Bangkok cinemas. 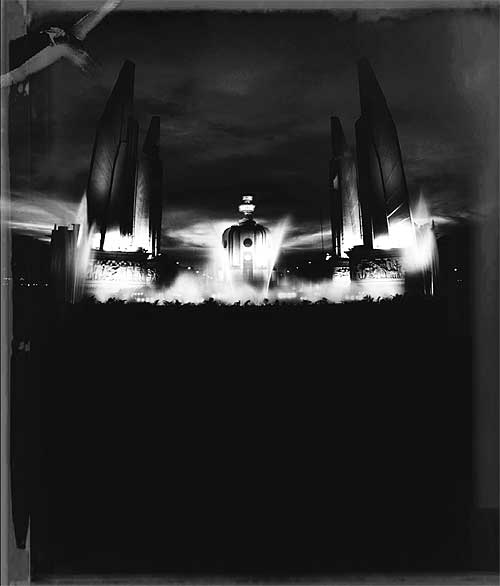 But the turbulence of those years was enormous. The tussle, coup and counter-coup _ above ground and underground _ between the conservatives and the revolutionary forces were protracted, and the film was later banned before it was allowed to be shown again in a back-and-forth wrestle that reflected the shifting of power beyond the cinema screen.

The film shot on that June day in 1932 no longer exists. That first Thai movie about democracy _ such an elusive, stubborn and inevitable subject _ was long lost to the dust of history, crumbling under the tyranny of time, oxygen and chemical disintegration. And crumbling along with it, perhaps, is the belief in film as a medium to record and champion democratic ideals.

This weekend, a number of commemorative events marking the 80th anniversary of Thailand's constitutional democracy will take place. On the cinematic front, the Thai Film Archive tomorrow will host a seminar titled "Democratic Ideology in Thai Cinema", with the aim to find out if _ or how _ Thai filmmakers discuss or promote democratic values through their choice of medium. Though history will surely be revisited, the talk is likely to focus on the post-Sept 19 coup turmoil and how contemporary directors express their thoughts, confusion and frustrations through film.

Ironically, the seminar seems to be aware of the built-in paradox of its own topic: Is there any representation of the democratic ideology in Thai cinema? Do we in this country _ both film-makers and audiences _ believe movies have that social and political function? And finally, is it even possible to make a film about democracy?

"We doubt that too, but it'll be interesting to try to find out," says Chalida Uabumrungjit, deputy director of the Thai Film Archive and host of the event. "Thai movies usually see things in black or white, right or wrong. It's not very nuanced, and not very accommodating to the idea of diversity, which is the basis of a democratic society."

Chayanin Tiangpitayagorn, a film critic who will moderate the session tomorrow adds: "We may have to make a distinction between films that react to a political situation, which we've seen more in the past few years, and films that try to address or advocate democratic ideology, which we hardly see.

"Even when we have films that discuss our present-day politics, most of them do it obliquely. We seem to have been trained into the mindset that movies are no place for politics."

In Sakdina Chatkul Na Ayutthaya's recent article on the subject, film was exploited by all sides in the years after the 1932 revolution. The film documenting the 1933 Bavorndej Coup was released to drive home the idea that the military was the protector of the newfound constitution. Soon after, the film Lued Taharn Thai (The Blood Of Thai Soldiers) was commissioned by the authorities to emphasise the same point, and during the rule of Field Marshall Por Pibulsongkram, the film Kai Bang Rajan (Bang Rajan Camp) was made with the aim to instill the concept of nationalism. All these historic films, that carried propagandist spectacles and not exactly in the spirit of democracy, are lost today.

The only pre-World War II film that still exists, luckily, is also the one that pushes the value of co-existence and peaceful resolution of conflict _ in short, a democratic cornerstone. Prachao Chang Puek (The King Of The White Elephant), a 1941 film by Pridi Banomyong, was made as a call for peace during the onset of the war. In this film about an ancient rivalry between two nations, the victor at last grants a safe passage home for his defeated enemy, as justice and righteousness rule.

But there's a few bright spots in the murky swamp. During the military dictatorship of the 1950s onwards, democratic ideology was suppressed, officially and unofficially, and movies drifted apart from political reality into the realm of entertainment.

For instance, it wasn't written in the law that the police couldn't be criticised, but it was implied by various means, and this bred the culture of self-censorship among moviemakers that is still very much potent today.

This continued largely until the uprising of Oct 14, 1973, after which there was a brief spurt of political film-making and art activism. Some of Thailand's landmark films on social politics were made during those giddy years, for example Jon Ungpakorn's 1976 movie Karn Tor Su Khong Kamma Korn Ying Rong Ngan Hara (The Hara Women Workers Struggle) and Tongpan (1976). And even a mainstream film like MC Chatreechalerm Yukol's 1974 release Theptida Rong Ram (Motel Angel) intercuts thugs brutally beating up a prostitute with images of the military crackdown on student protestors.

Film was an emotive, intense medium, but also a clunky, laborious and expensive one. ''For democracy activists, it was easier for them to just write an anti-government poem, climb on stage and read it to the crowd, than to try to raise money to make a film,'' says Chalida of the Thai Film Archive. ''During the military rule, strong ideas were found more in literature than in movies.''

It's safe to be apolitical _ even apathetic _ to daily occurrences, to flee into escapism. The ruling mentality that art doesn't need to have a social function is so prevalent here that it has become almost superfluous to discuss it, even when Thai cinema had gone through a depressing period in the mid-1980s to the renaissance of the late 1990s. And then came that unpleasant milestone of the 2006 coup _ the turning point in political history of which lasting tremors remain conspicuous today.

Just like the uprisings in the mid 1970s, the coup seemed to have sparked an awakening in the use of movies to respond to political uncertainties _ and no digital technology allows moviemaking to be as fast as writing a few lines of rebellious poetry.

Or does it? Consider the Arab Spring. A year after the convulsing protests in Cairo and the overthrow of Hosni Mubarak, Egypt has churned out at least a dozen films on the subject, both documentaries and fiction.

One of them, called After The Battle, was picked for the Competition at Cannes Film Festival last month.

In Thailand, after the 2006 coup and the yellow shirt rallies, and especially after the red shirt riots of 2009 and 2010, there have been a number of films that touch on _ usually in a roundabout or poetic way _ the political unrest that has turned the country into a colour-coded madhouse. Almost all of them are short films or independent films.

But while the fervour is obviously rekindled, there's still no film that nails the feeling satisfactorily, and only a few have attempted to transcend the immediate fracas into the realm of crystallised ideas.

Among the noteworthy titles is Tanwarin Sukkapisit's I'm Fine Sabai Dee Ka in 2008, a ''performance film'' in which the director locks herself up in a cage placed directly in front of the Democracy Monument and keeps repeating to curious passers-by that she's all right _ ''Sabai dee, because I'm Thai''. In Mundane History by Anocha Suwichakornpong, the image of political protest sneaks into the main narrative in the form of a strange, cosmic metaphor. In October Sonata, a 2009 film by Somkiat Vituranich, a love story has the backdrop of crushed ideology and disillusionment after the 1973 uprising.

And then there's the film that tackles our recent mayhem with great gusto and classical analogy, Shakespeare Must Die _ Ing K's movie, based on Macbeth, which tells the story of a power-lusting politician resembling Thaksin Shinawatra, which was banned by the censors in a high-profile case last month. Meanwhile, Thunska Pansittivorakul's The Terrorist, a staunch reproach of the Abhisit Vejjajiva government after the May 2010 crackdown, went underground and was hardly seen in public here.

''We have obviously seen more films that talk about politics _ especially among short-film-makers who can respond more quickly to what happens in the country,'' says film critic Chayanin.''In 2009 and 2010, there were a lot of what we can call 'red-shirt movies' made mainly as a form of reaction and screened only to a limited audience.

''Later, when things turned out to be more complicated, we saw films that were more ambivalent in attitude and perhaps deeper in terms of concept and political references.''

Wichanon Somumjarn, for instance, will soon release his first feature, In April The Following Year, There's A Fire. The film is set in the northeast, and while it professes no political agenda, it has scenes alluding to the Ratchaprasong demonstrations.

''I think I was trying to find a way to say what I want in an indirect way,'' says Wichanon, a native of Khon Kaen. ''I want to talk about how Isan people have been very active in the political upheavals of the past years, but I guess I was doing this in a more poetic way. Admittedly, I was careful not to be too blunt. Maybe this is not a place or a time to be too blunt.''

Apparently what film-makers are wary of is the accusation of taking sides. In an echo of the larger social climate, it seems impossible to discuss politics or evoke the term ''democracy'' without appearing to favour one camp over another.

The distrust and prejudices are entrenched in the consciousness, and such mental divisiveness is in itself a mockery of the democratic ideal.

When director Chulyarnnon Siriphol made A Brief History Of Memory, a film about the shooting in the Nang Lerng community, which was allegedly committed by red-shirt members, he was automatically catalogued as pro-yellow. The film, in fact, talks about political victimisation regardless of colour preference.

In his 2011 film, a short piece of barbed humour called Planking, Chulyarnnon appears in his own movie by performing the popular fixed horizontal position dubbed ''planking'' at various political sites in Bangkok while the National Anthem is played in the background. And with that, he could have easily been thrown into a different camp.

''I'm not saying which side is better,'' says Chulyarnnon, 27. ''The situation is more complex, and my thinking isn't fixed on any side now that things are changing so fast.

''What I think movies should do is go to beyond the bickering and perhaps suggest a way out, or at least reflect that reality is not black and white like we often think. In the end, it's best to question every side.''

And so the question remains: Will there be a way to champion democracy through movies? Eighty years after the first Thai film about democracy, and 80 years after 16 coups and countless elections, the search for democratic ideology in movies continues. Maybe the point is not to find it, but to keep on looking.

''Or maybe we need a little more time for the dust to settle,'' says Chalida from the Thai Film Archive. ''Then film-makers and artists can see things clearer.''

And if they do, hopefully the audience will, too.

The panel discussion ''Democratic Ideology in Thai Cinema'' takes place tomorrow at the Thai Film Archive, starting at 3pm. The talk is in Thai. Call 02-4822013.