Known as a gloomy rocker with a cult-like following, Apichai Tragoolpadetgrai brings melancholy to the screen in his debut film role

What does Apichai Tragoolpadetgrai have in common with David Bowie, Justin Timberlake and Frank Sinatra? At first glance, the long-haired 40-something singer has no resemblance to Ziggy Stardust, the R&B boy wonder or Ol' Blue Eyes. 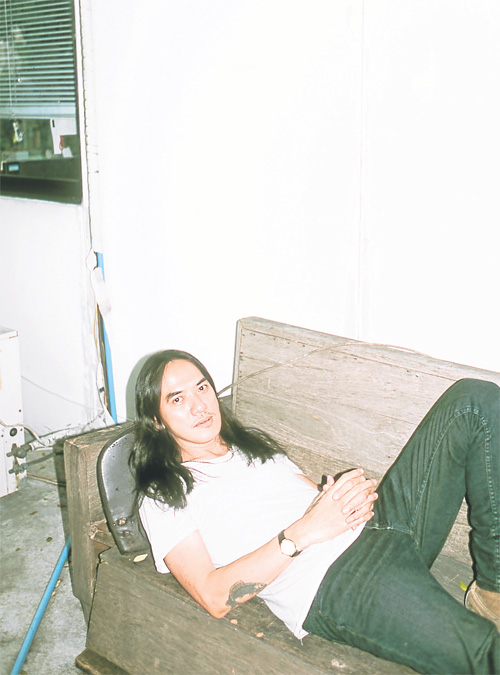 But with Tae Peang Pu Diew (P-047), Apichai, known by the moniker Greasy Cafe to music fans, now joins the rank of musicians who also thrive in the acting world.

It's nothing new for singers to jump over to the silver screen, but not many can do so with such intensity and originality that Apichai delivers as a lead in director Kongdej Jaturanrasmee's internationally lauded feature. P-047, which was premiered at Venice International Film Festival last September, will be screened in Thailand for the first time tomorrow.

"Don't go in with any preconceptions or else you won't be able to enjoy this movie at all," said Apichai. In P-047, Apichai plays Lek, also his real life nickname.

Lek is a locksmith who breaks into other people's homes with Kong, a hopeful screenwriter, to go through their belongings, hoping to learn what the inhabitants are really like. But one day, Lek wakes up in another town where people call him by a different name. Apichai, a first-time actor, gives a surprisingly powerful, non-referenced performance as well as soul-wrenching internal turmoil where life and art intersect.

"I remember being at Fat Festival 2010 when one of Kongdej's team members called me about the prospect [of playing the role],' he said. "I thought it was a prank at first. Then they sent me the script, and I thought I had nothing to lose trying out.

"It was difficult at first. I didn't know what to do, and the director didn't want me to take any acting courses, he wanted everything to be as real as possible. But the more I understood my character, the more I was able to relate to him, which made it easier."

''The director wanted a regular Joe. He wanted someone fresh. He said the reason he picked me [was] because he wanted someone who could just stay still, but emotions seemed to be bubbling continuously underneath,'' Apichai added.

The same can also be said for Apichai's music. Operating as Greasy Cafe, he has acquired a near cult status among serious music listeners, garnering awards as well as critical acclaims left and right.

Apichai, a gentle, good humoured older brother type uses melancholy in a non-overwrought way over his Brit pop inclined melodies, while his lyrics read like masterful poetry which requires a deeper understanding of human soul.

Greasy Cafe is one of a rare breed that commands respect and a loyal, diehard fan base that looks to his music as life saving and uplifting. Through his music and sincerity, Apichai has unknowingly earned an enigmatic status. 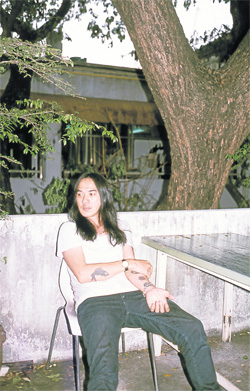 ''I am just honest about my emotions, and I tell them as they are, as raw as they might be. Everything I put out there is true. I don't think you can understand what I'm singing about just from one listening. It takes time. I feel that I'm just telling stories of things like love, dreams, naked reality and feelings that everyone goes through, so I think the listeners can relate and connect with me quite well,'' he said.

Growing up with a musician sister who played bass in a hippie band, Apichai came to love music from a young age. His sister's friend taught him how to play drums for a bit, but the lessons didn't last long, and Apichai ended up practicing his drum skills on pillows.

Then he became interested in his older brother's guitar, something the owner was rather possessive about.

''My brother didn't want to teach me. He said, 'If you want to know how to play, just learn it yourself'. That gave me such a push to teach myself how to play guitar. So I bought song books, and learned from there.''

After finishing a local art school, Apichai started working as a prop hand for a production company. It wasn't long before he decided he wanted to enhance his English-language skills abroad. He chose the UK. At first, he only aimed to study language courses, but once the courses finished, Apichai enrolled for a photography degree on recommendation of his language tutor.

''This was before the arrival of the internet, so I did my research from photo books to gain admission,'' he said.

Photography became his passion, but music was something he could never give up. Towards the end of his first year as a photography student, Apichai saw a ''guitarist wanted'' poster in his school's cafeteria. He thought of applying against his friend's objection.

''So I went to the audition. I walked in, and there were these three English guys. They asked me to improvise to their self-composed music on the spot. I didn't even have a guitar then! But somehow they liked my style, so I was accepted into the band. It was called The Light,'' said Apichai.

''We had a pretty good run, gigging around. We were serious about it back then. Just the other day, I was going through my things, and I found a notebook from that period, and all the bookings and gigs were written there. We played quite a bit!

''But after a year, reality caught up. The rest of the band needed to make real money, and I was about to finish my degree. There were a couple of interests from record labels, but we didn't have any money to write extra songs or rework what had already been submitted. We called it quits.''

After graduation, Apichai stuck around working odd jobs in the UK, before returning home. He landed a job with Bangkok Metro where he met Smallroom's founder Rungroche Uptampotiwat for the first time while photographing him, his assignment for the day. Greasy Cafe was featured in the label's first compilations, Smallroom 001 and Smallroom 002 roughly 12 years ago.

He became a full time musician much later. He worked as the official photographer for many successful movies, from Jan Dara and Mont Rak Transistor to Ong Bak 2.

''I was still shooting photos while working on my first album, but once it was completed, I decided to fade out as a photographer as I wanted to pursue music full time,'' he said. ''I still take pictures in my free time. I am thinking about holding a photo exhibition soon.''

Greasy Cafe's debut album, Sing Loa Nee (All These Things) came out in 2008, and Tid Tang (Directions) a year later. Both albums produced sleeper hits, and have remained firm favourites since. The upcoming The Journey Without Maps will explore relationships, and how they can be compared to a journey as well as the uncertainty of it all. It is also a result of Apichai's recent five-month journey to the UK. ''Musically, I want to return to the eclectic tempo of my first album. I want the music moods to be different from one song to the next,'' he said.

As for acting, Apichai said it's something he enjoys, and would take another stab at it if the opportunity comes along.

''The feedback from festival screenings has been good. I think acting is challenging, and I can do more, but sometimes I ask myself if I can be good enough, or what I've done with this movie is already enough. I don't care if [the next movie projects are] indie or mainstream as long as the parts fit me, and I think I can bring something extra to the table.''