And the strong line-up and perfect weather set the tone for the polyglot of rhythms and rhymes from near and far to flow; and they did, with local diva Zee Avi stealing the show. 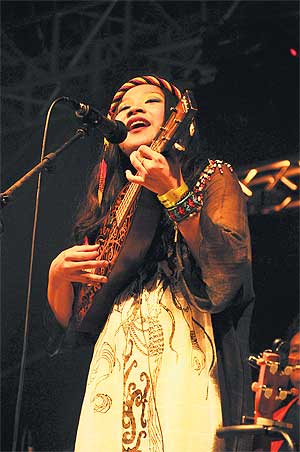 Even though the weather forecast warned of rain, the Sarawak Cultural Village was treated to perfect, mild weather over the three days (July 13 to 15). The village, perched on a sliver of land between the majestic Mt Santubong and the South China Sea, came to life during the festival. The wooden walkway of the circuit once again teemed with festival punters, who for the first time seemed to be as interested in the daytime activities as the evening shows this year.

As usual, the line-up included a neat mesh of local ethnic offerings and a wide array of global flavours. Opening the musical proceedings on the first night was the Sape & Warrior Dance ensemble, creating a colourful portal for the event anchored by the iconic sape stringed instrument that has become the calling sound of the festival.

The proceedings gathered momentum through the first night with the multi-national String Sisters who hail from five different countries but unify for soaring melodies and smiles on stage, looking genuinely chuffed to be there. After more local flair with Rhythm of Borneo, La Zikabilo brought their hyper-gypsy stampede to the peninsula, flooding the main stage with energy and infectious guitar-driven riffs of jazz, gypsy and rumba.

Then the pint-sized Zee Avi swayed onto the stage and stole the show. The local YouTube-rocker-turned-diva has taken flight from Sarawak to make good in the US, but seemed so at home in front of adoring fans who called for encores and more. She rounded out a complete night, which was appreciated by the 5,000-strong crowd, many of whom had made the trip after a week's work in nearby Kuching.

With so much already down, it should have been difficult to match the musical heights of the opening programme on subsequent nights. But the line-up promised to do so.

Khusugtun of Mongolia opened the international buffet on the second night, with their meditative throat singing and traditional string playing, drawing big cheers for their proud performance.

Danyel Waro from the Reunion Islands delivered his hypnotic, driving vocal Maloya rhythms that resonated through the festival site. Cankisou from the Czech Republic delivered some hyper-drive with an interesting array of instruments played over a rock base. The final night featured Hata, the super-band with members from all over Asia, both east and west, culminating in something of an Eastern orchestral symphony.

Then Oreka TX of the Basque region in Spain took to the stage with their eccentric txalaparta instruments. The two percussionists drew their sound from striking materials such as wood, stone and even plastic drums, in uncanny harmony. They smartly accompanied the show with a multimedia content.

Kanda Bongo Man anchored the festival, which proved to be a good choice. Their guitar-driven music is completely infectious and undeniably fun, perhaps the epitome of the world music sound, and when the buxom dancers stormed the stage, even some of the photographers in the pit couldn't stand still.

Then all artists merged on the stage for the finale, without the awkwardness of everyone trying to play at once like last year. And with rapturous applause both on and off the stage under the final fireworks, it was hard to know who was having a better time.

While the performances in the evenings were more than enough to fill out a weekend of world music indulgence, the days were again filled with various workshops and masterclasses from the wealth of musical talent on hand. This year had big crowds, with full attendances at most workshops.

On the opening day, The Zee Avi Story gave the back story of the pocket-sized star. Six of the Best gathered five stringed instrument players in an unlikely jam, which enabled the musicians more freedom to shine. The next day, Talking Tablas posited a conversation of percussion instruments, overseen by the bendy spirit of the versatile tabla drum.

Then on the final day, Fingers and Thumbs amassed a long line of string players on the stage from various corners of the globe, showcasing the versatility of the instruments while unifying their common themes.

While the popularity and awareness of the event continues to grow, it still remains a performer's festival, with the enthusiasm emanating from the stage itself rather than the promoter's bag of tricks. It's the secret to its success, and while it maintains this balance the festival will continue to charm.