The world is sick. And one of the problems is our indifference to its cries for help.

"Saving the environment is everyone's responsibility," says Kompin Kemgumnird, director of Echo Planet, Thailand's first animated movie on the theme of the environment.

The threat of global warming and the need to reduce conventional energy consumption are among the messages of the film that aims to raise public awareness about green issues. And the colourful attraction of the new movie _ Kompin was behind Thailand's hit animated films Kan Kluay and Kan Kluay2 _ is a means to pull young people into the cinemas.

The main characters of Echo Planet are four heroes from two cultures. Sam is the son of the President of Capital State; the boy represents an urban, technology-dependent mindset that doesn't care much about the environment. Norva is a cute 14-year-old Karen girl who is the older sister of Jorpe, a three-year-old boy who can communicate with animals and plants. Lastly there's Chepo, an orphaned tapir who follows Jorpe everywhere.

These three characters, said Kompin, are substitutes for local people whose lives remain close to nature. 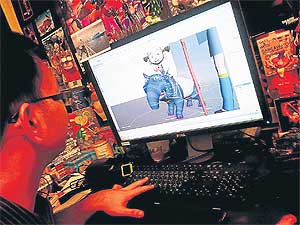 The adventure of the four heroes starts when little Jorpe is called to the save the world from an abnormality caused by BUCT _ an abnormal heat wave has mutated into a physical form. At the same time, scientists in Capital City, where life is surrounded by modern technology, find a way to eliminate BUCT by using the Cool Bomb. However, the Cool Bomb will cause a new problem: the village's shaman predicts that if BUCT and Cool Bomb face each other, it will cause the end of the world.

"People nowadays choose to solve problems with modern solutions," said Kompin. "We will do everything to solve the problem even though the solution can cause new problems. This approach will only worsen the situation instead of fixing it."

Kompin added that that the world isn't losing its balance, but it is adapting itself to adjust the balance. Changes happen all the time, but all of the problems created by humans will speed up those changes.

And while there are many future environmental problems that need to be addressed, humans are only concerned about those that affect them immediately. Global warming is a good example.

"Before I started Echo Planet, I had never asked taxi drivers their opinion about global warming," said Kompin.

"The driver would say that this is the problem of powerful nations, and it's nothing to do with him. He cares only how he can survive each day.

"But people should not just focus on solving current conflicts. They should rather look to the future.

"The best way to solve environmental problems is to change people's attitude. The word 'wait' is the major hurdle. The characters in this film reflect the human habit that they will not do anything more than what is necessary."

To put the message in local context, one of the distinctive qualities of Echo Planet is the Thainess of the characters. The style may be influenced by Pixar or other Hollywood studios, but Kompin worked hard to instill the four little heroes with local traits.

Some of the characters in this film are Karen _ a minority group inhabiting the Thai-Myanmar border. So to make these characters look truthful, Kompin and his team researched and collected data about the lifestyle, customs and beliefs of Karen in Mae Hong Son province. When the characters from different backgrounds meet, the film is made more realistic by highlighting their cultural distinctions.

"The only problem of animated films nowadays is the attitude of some adults that cartoons are a medium for children," said Kompin. "In fact, cartoons can be for everyone, depending on the content."

Kompin's idea is to make Echo Planet not just a cartoon for children, but for the whole family.

"I hope the audience will understand the messages that I want to convey to them," said the director. "When the viewers start to think and discuss with other people, their behaviour will be more environmentally-friendly." 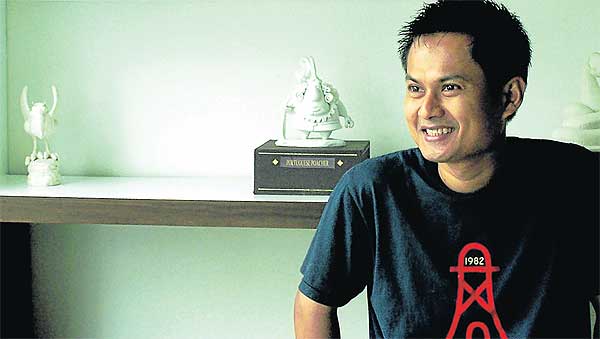