'No thanks, I'll take my movie elsewhere'
Life
Arts & Entertainment

'No thanks, I'll take my movie elsewhere'

The first 'Yes or No' three years ago was a box office flop in Thailand but its popularity around the region was so great the executive producer was able to pay for a sequel. She tells 'Brunch' the secrets of her success and how she turned down a Thai backer's offer to protect her story

Film production costs of 15 billion baht and box office receipts of 15.3 million baht do not equal good business. And that's especially true since cinemas take a 50% cut and you're left with half the revenue. The 2009 romantic movie about two lesbians Yes or No was not a hit with Thai audiences and was only out in theatres for two weeks. In China it had a limited release. In Indonesia it was banned outright. 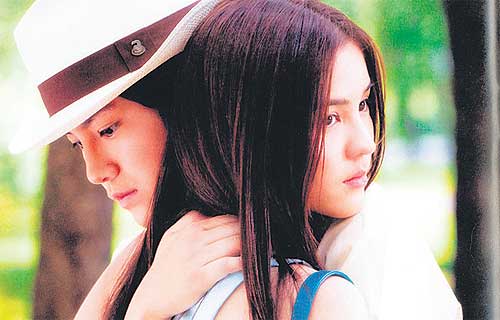 There were three main factors driving her decision. First, the original did not fare well at the box office, but it did make for lucrative business elsewhere. Through DVD sales and downloads it became a hit with regional audiences in places like Taiwan, Macau, Vietnam, Cambodia and Indonesia, despite the ban.

The third factor is that Chatchada just loves making movies her own way.

''I didn't expect anything,'' she said. ''If you have expectations, you'll have disappointments.''

She lamented the disillusionment, two-faced treachery and obsession with money that is rife in the industry. ''If you hate someone, tell them to go into the movie business,'' she said.

Nonetheless, Chatchada found a way to make her sequel, striking a chord with regional audiences and making clever use of merchandising.

Chatchada's success is evident in the rapturous reception her stars have received in the region.

Suppanard Jittaleela plays one of the film's two leads in both the first and second films, a tomboy. She gave her debut performance in the first film and now has tens of thousands of fans across the region.

While only a handful of fans show up to greet her at Suvarnabhumi, she receives the opposite reception in China. ''When I get off the plane in China, fans [over 1,000] welcome me,'' she said. ''They even get in their cars and follow me to the hotel.'' 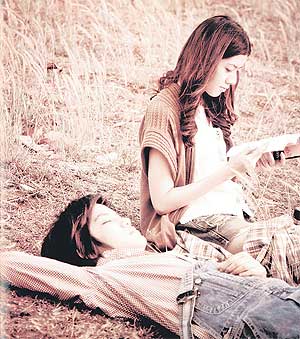 Over the past two years, Suppanard and Suchar Manaying, who plays her love interest, have held more than 10 concerts in China. They have also appeared on TV and on the covers of Chinese magazines, including Shanghai's Easy Magazine.

Merchandise has also proven lucrative. Yes or No has been out for three years and even now orders flood into Chatchada's office from the movie's website for T-shirts, posters, CD soundtracks and box sets. DVD buys have also been lucrative.

Chatchada would not reveal how much money has been made through concerts, appearances and merchandise _ but it did enable her to make Yes or No 2.

Suppanard suggested that the difference in the way Thai and regional audiences responded to Yes or No could be down to the fact that in Thailand it's normal for young lesbian and gay couples to hold hands and come home together to meet the family. The movie, though still considered controversial by the standards of the Thai movie industry, reflects an acceptance that is not unusual in Thailand.

That is not the case in places like China and Indonesia, where such behaviour is frowned upon. But lesbian love affairs, of course, take place regardless of cultural taboos and therefore the movie struck a chord with audiences where these stories weren't being told.

''Also, the movie is not dark, like this sort of movie usually is,'' she said. ''It has a light and innocent touch.''

''The more you try to shut things down, the more people are curious about it,'' Chatchada said. She is an author and publisher; Yes or No was the first movie she produced.

''I just wanted to give it a try. I wanted to make enough money to build a Buddhist centre,'' she said.

''But I have to do it my own way. Some Chinese investors approached me, wanting to invest in Yes or No 2, but on the condition that I had to change the ending to the lead female ending up falling in love with a guy. So I said no.''

Yes or No has since been featured at film festivals around the world and received accolades such as a Special Jury Mention Award at Festival MIX in Milan, Italy. It will also be released on DVD in the United States. Both Chatchada and Suppanard hope for more successes with Yes or No 2. A big concert is planned for the premiere of the film; expect a throng of Chinese fans to fly in.