Chinese film-maker Ying Liang, who can't return home after his new film upset the government, is in Bangkok this week to give a talk

Ying Liang first heard he couldn't go home when he called his mother in China. He was then in South Korea, and soon the news was confirmed by the police: should he set foot back in Shanghai, where his family lives, the film-maker will face arrest.

"It seemed completely absurd, simply because it was unbelievable," says Ying. "I thought it was only during the Cultural Revolution or earlier that you could be treated this way just for making a film."

It was May. The 34-year-old director had just screened his quietly moving film When Night Falls at the Joenju International Film Festival. A cool-headed crossbreed between documentary and drama, the film is based on a controversial real-life case of Yangjia, a man who became a symbol of political bitterness and resistance when he was arrested and beaten for riding an unlicensed bicycle.

Yangjia made repeated complaints about the beating _ all went unheard _ and the police continued to harass him. In 2008, Yangjia killed six policemen with a knife and was sentenced to death.

When Night Falls, however, tells the story through the perspective of Yangjia's mother, Wang Jingmei, a grieving woman who, in a labyrinthine complication connected to state apparatus, is inexplicably sent to a mental hospital and detained for 143 days while her son is on trial.

The weight of her worry and heartbreak drives the film, and what gives When Night Falls a stirring resonance is that the director doesn't brandish political activism but mournful humanism in his approach.

Yangjia's murders are real, and so are the injustice and cruelty surrounding his trial, but this 74-minute movie is about a mother trying to save her son, or at least his soul. After the trip home becomes impossible, director Ying has been living in Hong Kong. Earlier this week he arrived in Bangkok, where he will screen When Night Falls and give a lecture at the 16th Thai Short Film and Video Festival, on the 5th floor of Bangkok Art and Culture Centre, this Friday at 1pm.

"I don't really know what the [Chinese] government is thinking," says Ying.

"Before they threatened me, I doubt hardly anyone knew of a director named Ying Liang, or wanted to watch a film called When Night Falls. But everything they do seems to confirm my status as a director. It's awfully strange.

"Unless you're making an action film, I don't think most people would have thought of films or film-making as particularly dangerous."

Censorship and art often lock horns _ with the former the obvious victor _ in certain countries such as China and Iran.

But a threat of arrest pushes things a step further, though it's not unprecedented. When Night Falls has a line that mentions Ai Weiwei, the artist once detained by the authorities and who also made a documentary film based on Yangjia's case. When Ying's plight became known, the spectre of harassment and menace that Ai was subject to seemed to return with it.

It's widely reported that after the screening of When Night Falls, policemen visited Ying's family in Shanghai ''at least seven times'' and used ''intimidating words'', Ying wrote on Facebook.

Ying also relates that there was a strange offer by the authorities to buy the film's rights at a laughably exorbitant sum _ 5 million (200 million baht) _ from its Korean owner (Ying made the movie as part of a three-film ensemble commissioned by the Jeonju International Film Festival).

Ying has made three films before, and all have a low-budget appeal and spontaneous pluck while their critique of modern China is done in a way that doesn't call attention to itself.

Surprisingly, despite the subject matter, When Night Falls is Ying's most gentle film, yet its strength and humanist gravity are genuine and palpable right from the extended opening scene when Yangjia's mother recalls her ordeal while the screen shows still photographs of the incidents leading up to the case _ and more importantly, of the extravanganza of the Beijing Olympics that was taking place at the same time. 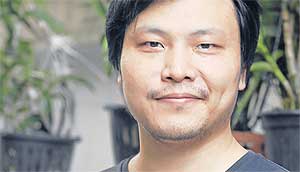 It's a personal feeling, though, that drove Ying to tell this story in his film.

''The film is about Yang Jia's mother. And what strikes me most about her story is that strangers got the news of her son's death earlier than her _ I could relate to such feeling of being kept away from the truth since it's part of my childhood memory.

''When I was 11, my father was kept away from home for three years. And my mother's reaction to this family disaster is unforgettable.

''On July 1, 2008, I was on the way back to my home in Shanghai. When passing by the Zhabei Bureau [where Yang killed the policemen] I saw lots of people in uniform, and it was quite crowded. Since my grandmother was once in charge of the public security system in Zhabei district, I've never been a stranger to the folks working in this building that was the crime scene.

''In fact when I was a kid I used to do my homework in one of their old buildings. My current home in Shanghai is just one bus stop away from the Zhabei Bureau. I feel I'm close to Yangjia, and I could relate to him.''

Ying's first film, Taking Father Home, features a boy from a rural area who's arrived in the big city (with a live duck in a basket strapped on his back) to look for his dad, who had disappeared, and becomes stuck in a mad swirl of political, natural and economic torrents.

His second film The Other Half, about a woman working in a law firm that deals with various cases of poor citizens, mixes real subversion with gentle comedy. A number of Chinese filmmakers _ Ying Liang, Jia Zhangke, Ai Weiwei, Lou Ye _ seem to realise that their role is artistic and journalistic, and their medium of choice can relate more than stories but also the social superstructure that's conditioning the life of people, mostly small people.

''I've always felt that films made about political subjects or about social movements are deeply important. But my own approach to politics or society has always been emotional, and my expression has always come from a personal or cinematic angle.

''My entry has always been the character, and the emotion that exists between characters. You could describe this as 'personal politics'. For example, I think if somebody has a lot he/she wants to say, but is forbidden from speaking, that's politics; at the same time, in this extreme environment, some strive for the right to speak, and that's politics, too. Of course, the film itself is just another mode of speech.''

Speech, as it happens, can cause alarm, even when a film like When Night Falls is ripe with sadness rather than rage, with motherly misfortune rather than dissident outcry. Ying's formal handling of space in every frame of the film will also be a cause for discussion at his session this Friday. After that, he'll think about what he'll do next.

''I have only two choices at present: stay outside of mainland China, or return,'' he says. ''The first choice can ensure my safety. If I were to take the second option now, I would lose my freedom. I'm not all that worried about this, but I need to carefully consider whether this decision would result in something worthwhile.

''I will continue to wait and consider.''

Ying Liang's masterclass will take place this Friday, at 1pm. The venue is the 5th floor auditorium of Bangkok Art and Culture Centre. Admission is free.

Ying will speak in Chinese assisted by a Thai translator, but the Q and A can be in Chinese, Thai and English.

The talk will be followed by a screening of When Night Falls.

The programme will also screen two other short films that were part of the Jeonju Digital Project: Light in the Yellow Breathing Space by Vimukthi Jayasundara and The Great Cinema Party by Raya Martin. Every year the festival, in a small town in Korea, commissions three film-makers to create digital shorts with complete liberty over subject and style. The length is usually around 30-40 minutes, but this year's three films in the pack run much longer.

Over the years, the Jeonju Project has grown into a much-expected event for it has enlisted directors with a strong, personal vision, such as Claire Denis, Jean-Marie Straub, Apichatpong Weerasethakul, Pedro Costa and many more.