Portraits from the fringes

A new exhibition showcases the works of two Myanmar artists

'Portrait of Myanmar" is an exhibition showcasing two of Myanmar's top artists, U Tin Win and Khin Zaw Latt. The exhibition brings the viewer into the lives of Myanmar people who are living on the fringes of society. 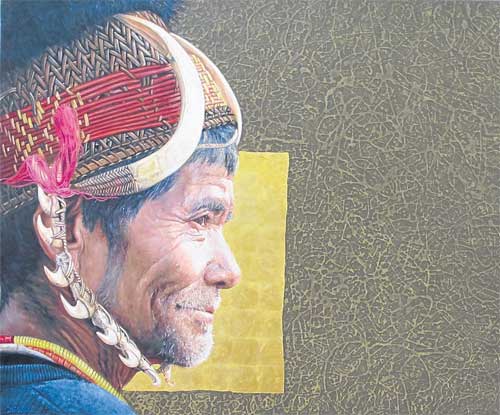 Naga man with tiger claws , by U Tin Win.

The artists are from different generations, and that fact allows them to bring distinctive perspectives to the rapid transformations happening within the country and the effects it will have on those most vulnerable to the change.

On the main floor of the gallery, Khin Zaw Latt's paintings show children who live hard lives on the streets of the country's urban centres.

Khin Zaw Latt, 32, has already acquired an international reputation. As a father of two he realised the importance of education but saw that many Myanmar children were not given the opportunity to learn.

"It is about the poor kids and also about their education. They have no chance to go to school and that made me create these," he said.

The black and white acrylic paintings illustrate the children who call the docks and the streets their home.

"Generally it is about the street kids but every single kid has their own story," he said.

"He was only 12 years old," the artist explains a picture of a bright-eyed young boy. "His father passed away a long time ago and he has two sisters and a mother so he sells postcards. When he saw I had a camera, he thought I was a foreigner so he tried to sell me the postcards too." 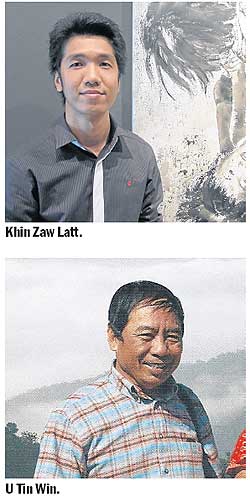 The harsh reality of the boy's life is exposed in the painting but his eyes show a youthful exuberance. Although life has handed them struggles it is apparent that the street children still have hope. Khin Zaw Latt said creating these pieces brought up a lot of questions.

"People don't look at them. I kept looking at them and wanted to ask why they are still on the street if Myanmar is progressing and developing?" he asked. "Progress in Myanmar is just on paper right now. Hopefully it will develop but it's still the same and hopefully people will see that by looking at these."

His paintings provoke the viewer to ask many questions about the development of Myanmar and about who will be left behind as the country changes in the future. As you walk up the stairs to the second floor of the gallery very different faces stare from the canvases. U Tin Win's portraits of tribal people show the cultural differences in a country with 135 distinct ethnic groups.

The 60-year-old U Tin Win is regarded as a master artist in Myanmar and his photo realism paintings demonstrate his technical and creative skill. The oil and gold leaf paintings show the tribes of the Naga people in the northern mountains to the Salone people who live most of their lives on the sea.

The faces that stare from these walls show a pride and strength not present in those from the city. Although they remain distant from the increasing outside influence in the country, U Tin Win points out differences in the traditions that confirm the affects of the changing social and economic situation even on those that are the most removed.

"This one is made of tiger's claws," U Tin Win said pointing at an elaborate headdress in a painting of a Naga tribesman. " [Outside] people look at that and say they want it. They go to the Naga people and say they will pay US$1,000 [31,000 baht]. The Naga people are very poor and they sell it. Now the accessory is no longer made of tiger's claws, it is made of wood."

He points to other paintings where the Naga have substituted the traditional tiger claws and ivory bands with wood, plastic, or even bamboo. While creating this series of paintings, U Tin Win visited the remote communities where the tribes live.

From the paintings, his admiration for the traditional way of life is apparent.

"They do an animal-dance and it's beautiful. Their bodies are very strong, and some have become very good friends with me now," he said.

It is why he is concerned about outside encroachment on the traditional way of life for these communities.

Although he supports increased access to medicine and education he is worried that the communities may lose more than they will gain.

"It is getting easy to use the internet and the mobile phones but I am an artist and I am worried about the traditional cultures. I think that one day it may all change to modern culture, our origins will disappear," he said.

As for the changes that have taken place for the artists themselves, both say it is moving in the right direction. Myanmar artists have better access to artists, works and exhibitions from other countries due to increased internet access. It has allowed them to showcase their work all over the world.

"We used to have more censorship. We still have censorship but before we could not make pieces about the poor, we had to make more scenery pieces," he said. "Even if you made it black and white they would ask a lot of questions. Now they are more flexible except you cannot make nude paintings."

Portrait of Myanmar is on view at La Lanta Fine Art in Sukhumvit Soi 31 until Oct 5. 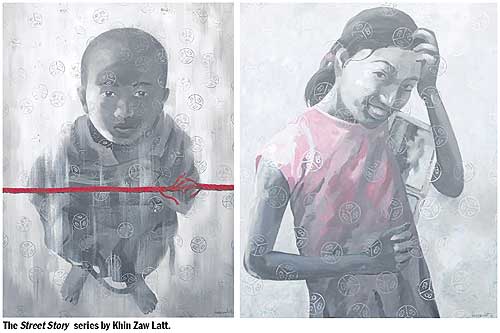