Creative guru Prapas Cholsaranon is a songwriter, author, TV producer, and now he's ready to unveil his first movie, an animation based on the Ramayana.

The man is 52, and yet retains his youthful vibe. His dark-framed glasses, besides his bright face, are what help us recognise him. He shows up slightly late, as to be expected from a founder, top executive, chief brain and nerve centre of one of the country's most powerful showbiz companies. On his desk is a dish of egg tarts, his choice sweet. He smiles and invites us to join him. Outside the office window of Workpoint Entertainment stretches out the vast, dry, flat, skyscraper-less expanse of Pathum Thani. 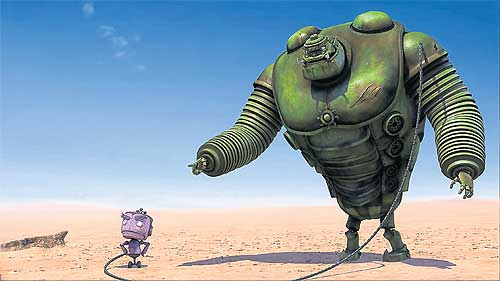 Yak the Giant King is Ramayana meets Wizard of Oz at a crossroads in Thailand.

Prapas Cholsaranon talks about robots. He talks about the colour, the material and the world in which he's chosen to populate them. He goes on at length about the 10-faced ogre that's proof, perhaps, of the omnipresence of the One. Is that Hinduism? Bhagvad Gita? Ramayana? Pantheism? It could be all or nothing. Or it could be, we gather, the joy and the gist of the first film he works as director, a much-awaited feature-length animated film called Yak The Giant King.

"Look at the colour of mural paintings in temples," says Prapas, sounding as if he was sharing a secret. "The tone is warm, slightly orange, with a touch of gold. I try to transport that into Yak. The tone of the film is red-orange, and since it's about tin robots, it works as rust colour as well. But not gold. Gold will be too bright, too much.

"In all, it's very Asian. It smells Asian. I don't know where we'll fit in in the world where we have Pixar on the one hand and Hayao Miyazaki's hand-drawn animation on the other. But we have cultural, historical, and intellectual resources to develop our animation," he smiles. "We'll see where we can go from here."

Yak will be released in two weeks _ on the same date as the re-release of Finding Nemo in 3D, one of the best-loved animated movies in history. "I just knew that now," Prapas says in mild surprise.

That's not something he seems to worry about, however. Yak, a 2D re-interpretation of Ramayana, which will be released both in Thai and English on Oct 4, is riding a positive hype generated by the lustrous, flowing quality of the film's animation that's not inferior, or imperceptibly so, than the Hollywood export.

With the monkeys and ogres and angels of antediluvian India replaced by tin robots wandering an imaginary wasteland looking for its maker, the film is Ramayana meet Wizard of Oz at a crossroads in Thailand. It sounds brave and slightly off-the-mark, and Prapas embraces that challenge, suggesting that he wishes to test the capacity of his first animation as a true global product. At Cannes Film Market this May, the early version was shown to selected groups of international distributors, and a few territories, including Russia, have already picked up the rights of the film.

The slick visual of Yak is just external and skin-deep. What makes the film a much-expected cultural spectacle is that it comes from the mind regarded as one of the sharpest in the Thai pop-culture scene of the past 30 years. 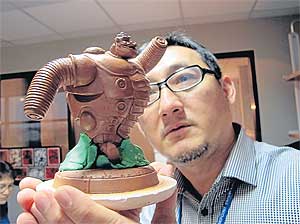 Prapas Cholsaranon and a model of the lead character.

Prapas, better known as Jik, belongs to the class of Chulalongkorn's architecture graduates who abandoned the draft table for TV, music and publishing in the late 1980s, and their particular brand of humour, worldview and uplifting outlook helped shape a stream of pop-consciousness to those who grew up in the 1990s. He is a songwriter, author, play director, TV producer, and he became a household name when he wrote songs for the band Chaliang two decades back _ songs like Mr Omelette, Kluay Khai (Bananas), or Rae Khai Funn (Dream Hawkers), whose lyrics sound utterly naive and childlike but may hide meanings about the joy and vacuum of life. Those are happy, new-agey songs, regardless of what you choose to learn from them.

Then Prapas wrote bestsellers, fiction and non-fiction, mostly relying on, in the standard of the 1990s and 2000s, irreverent yet not subversive humour. And yet in a curious evolution, Prapas's eccentric, slightly progressive aesthetics has also found its inspiration in traditional Thai culture, and this idol of the so-called alternative thinking went on to set up Workpoint with his friend and TV tycoon Panya Nirandkul. Today, Workpoint has grown into an empire: they produced hit TV shows such as Ching Roi Ching Lan (featuring slapstick interludes), Game Tosakan (a face-guessing game inspired by the 10-faced ogre in Ramayana), Fan Pan Tae (The Fan), Khun Phra Chuay (traditional Thai culture in a new presentation) and, yes, Thailand's Got Talent. The company is listed on the stock market, and it rarely makes a flop.

Workpoint has made several movies too _ none of them animated, though, and while most of them carried mass appeal and made money, they were derided by critics. Yak is the first time that Prapas sits in the director's chair. It's the film that will be associated more with him than with the studio, and that's enough to knock up the level of hype and interest.

Yak also continues Prapas's sensibility in trying to find that elusive equilibrium between what's Thai and what's universal. In finding new clothes for Ramayana characters _ Ramakien to Thai people _ he has the help of ace, US-trained animator Chaiyaporn Panichrutiwong (see box), who designed the characters and supervises the technical side. Otherwise the story, theme, messages, jokes and mood all come from the bespectacled man at the helm.

''I read the original text by Valamiki, the sage who wrote Ramayana, that says how the story in Ramayana can happen every day everywhere _ and it clicked,'' Prapas says. ''We don't have to do a literal narrative about Lord Ram, Hanuman, Tosakan [the 10-faced demon Ravana] and the abduction of Sita. We can tell a story about good and evil _ the evil outside and inside oneself. The main character, a giant green robot called Uncle Kiew, is a new version of Tosakan. He has only one face, but really, the message about finding out who you are plays nicely with our understanding that this guy should have 10 faces.

''I thought about robots because you can play with them. You can knock them about, you can hit their heads, you can throw them around a little bit, and it won't look violent. We create a world in this film _ but it's a world governed by a certain logic, and it's a world has the cultural details of Thailand. In the process, I think I'm trying to find a balance between the culture that we're familiar with and the possibility given to us by the medium of film and of animation. I can't answer you what the ''Thainess'' in the film is _ but I guess it's already there. Even the way we understand Ramayana is a Thai way.

''For me the animation is a new tool, a new paintbrush for artists,'' he continues. ''We have likay, we have Thai dance, we have shadow play _ and now we have this computer-generated movie. The story we're telling _ about friendship and self-actualisation _ has been told countless times before in literature and poetry, so now we're trying to tell it, enhance it, with this new means.''

In an unusual move, Yak will be released both in Thai and in English (''we have characters speaking LA accent, New York accent, Australian accent, depending on their personality,'' Prapas beams). As a public company, the studio's intention to expand into the international market is apparent and understandable, especially when the technical side of Yak is admirable _ and since recently Thai animation films like Kan Kluay did fairly well abroad. But also, the English-speaking Thai cartoon adds another layer to the cultural hybrid that Prapas seems to set out to explore.

''We did Yak the way most animated films are made, that is, we had the dialogue recorded first, and after that we did the visual,'' says Prapas. ''The first time I heard the characters speak, it was in Thai, and it sounded so strange to me. I don't know why, maybe we've seen too many non-Thai animated movies. So I decided to do another version in English. It works.''

What works for him, Prapas says, remains the same now that he runs a showbiz powerhouse as when he started out as a young man with nothing but idea. Ideas and dreams, maybe. What touches him remains the same: an angle of light, a cobweb, a crumpled paper bag, a banana. The way he turns those things into shared symbols of culture _ songs, sentences, movies _ is what makes him outstanding, and also what makes his critics jibe at his tendency to sentimentalise and at his dreaminess. They say what he makes is mass-produced culture _ as obvious in many TV products reeled out to great success by Workpoint.

''Steve Jobs and Apple have shown that it's possible to sell a lot of industrial products and to make those products beautiful and artistic. Art in the modern concept, I believe, makes no clear distinction between commercial art and pure art.

''Actually, I think everything I've learnt and everything I've done is a combination that points back to only one thing, one concept, one being,'' Prapas sounds conspiratorial. ''I don't know what that's called. It's just there, omnipresent, and every subject, every art work, is a manifestation of that thing. That's the story in Yak too.'' 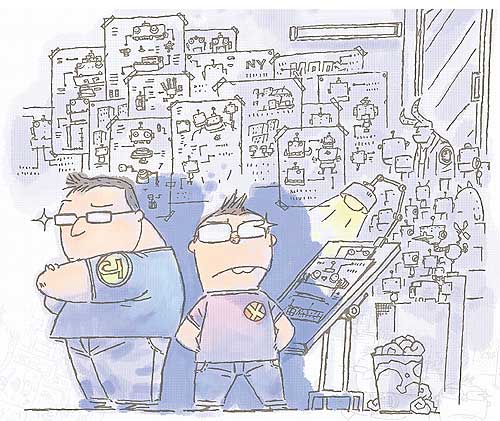 Thai animation in a flash

1955Payut Ngao-grachang made the first Thai animated film, the 12-minute hand-drawn Het Mahadsajan (The Amazing Incident). It is a witty account of several humorous incidents in Bangkok. Payut, who went blind in his old age and passed away in 2010, is still regarded as the father of Thai animation. 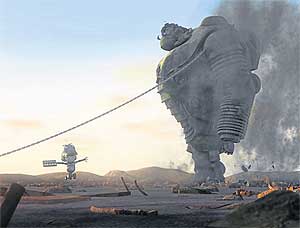 1979It took Payut 24 years after Het Mahadsajan to complete Thailand's first feature-length animated film, Soodsakorn. The film, also hand-drawn, is an adaptation of a Thai folk story about a prince and his fantastical adventures. No other full-length animation film would be made in Thailand for another 27 years.

1999The 3rd Thai Short Film and Video Festival initiated the Payut Ngao-grachang Award for animated movies. The award is still recognising outstanding works in the field until today.

1999Chaiporn Panichrutiwong won top prize from his 3D animation called Jiggy Bug at the Animation World Festival 2000 in Los Angeles, a surprise victor out of 700 entries. Chaiporn is the co-director of the film Yak (see main story). In the same year, his younger brother, Tharawit, won the Payut Ngao-grachang Award in Bangkok.

2006Kan Kluay , directed by Komphin Kehmgamnerd, was released by Kantana Studio. It was the first Thai feature-length animated film since Soodsakorn in 1979. Narrating the tale of a cerulean war elephant embroiled in the testy Thai-Burmese scuffle, the computer-generated film was a huge hit. It was also released in India and became a box-office hit.

2012In August, Kantana released Echo Planet, Thailand's first 3D animation film. It wasn't a success at the box-office though. On Oct 4, Prapas Cholsaranon and Chaipong Panichrutiwong will release Yak the Giant King. 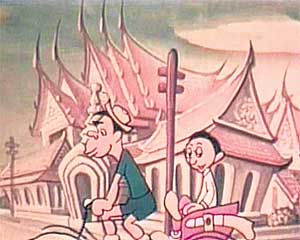