In the Spotlight
Life
Social & Lifestyle

Celebrity photographer David LaChapelle on creating, how to be happy, and finding balance in life

David LaChapelle didn't know the insides of coconuts _ not just the juice _ could be consumed. Upon suggestion that he should try one, LaChapelle, one of the world's best-known photographers, tasted the edible coconut flesh with an almost child-like wonderment. 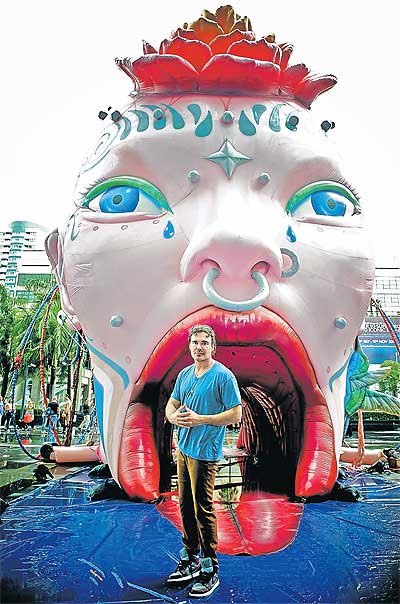 David LaChapelle with his inflatable sculpture You’re In My Head , as part of Smirnoff Midnight Circus world tour.

The master of vivid, hyper-realistic photography with a sense of humour and social satire edge was recently in town along with his gigantic inflatable sculpture as a part of Smirnoff Midnight Circus world tour.

It must have been LaChapelle's self-confessed love of lecturing to students that renders him an easy-going, open personality. He chatted, and stopped for pictures with throngs of adoring admirers who gathered around in his wake during the Midnight Circus party. He never once lost his apparent kindness _ far removed from a speculated moody, tortured artiste persona. If anything, as you'll see in his interview below, LaChapelle, at 49, seems to have found his inner sanctuary.

Starting out in the 1980s as an unknown photographer, his works eventually caught the attention of none other than Andy Warhol, who granted him a job as a photographer for the revered Interview magazine.

After the huge break, his career blew up thanks to his penchant for the stylised celebrity portraits and mind-blowing advertising campaigns. LaChapelle has developed a unique sense of naughtiness that spoke of high fashion and edgy modernity as well as spitting underlying social commentary. It would be pointless to list the names of publications he has shot for, but let's just say LaChapelle's photos have inspired generations of photographers, Thai lensmen included.

LaChapelle has also branched out into music videos, theatre and documentary films. Rize, a documentary on krumpers, showed us that there was more to the man than just flash.

Six years ago, LaChapelle, still very much on the high point of his career, abruptly announced that he would cut down on commercial works to concentrate on fine art photography, which is displayed in galleries and museums around the world. Every time he opens a show, he makes sure that there are accompanying lectures for students and young photographers.

This is what he has to say.

You always say that your works have narratives. What sort of stories are you trying to tell with the installation you've done for Smirnoff Midnight Circus?

The piece is called You're In My Head. Well, two heads are joined, and there's a hole through it. One is of sort of modern, futuristic tribal girl with tattoos and piercings on her face with contemporary make-up. She's kind of electro dance, Burning Man, you know. Attached to her is a face of a Masai female warrior. She has little pearls under her skin, tattoos, earrings and piercing. It's really to show how women have decorated their bodies with make-up, adornments and piercings for thousands of years. It's a part of our DNA as human beings to decorate ourselves, to wear certain colouring as culture, to distinguish ourselves, to celebrate. And also to come together and dance.

As long as people have been meeting, there has always been dancing. [Dancing] is something very humane, but it can also be looked at like 'oh, it's just a dance party'. But to me, dance was a very important part of my life growing up. When I was growing up in New York, you would go dance in a club and forget about all your problems. 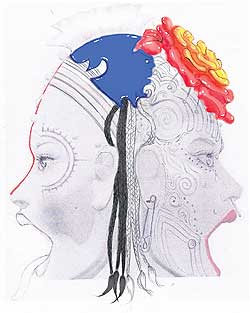 You’re In My Head Sketch.

There're a lot of things facing young people today that are very dark and very heavy in the world. Since we're in the age of information, we can see a lot of stuff [happening] that are almost apocalyptic. Look at what's happening with the environment, what's happening politically on a global scale, there's so much unrest and uncertainty. This is definitely a dark time. The world is experiencing mass anxiety. We need now, more than ever, a chance to release and forget. There's something beautiful about getting together with a big group of people to dance.

You're In My Head [also represents] how you're dancing with everyone, listening to the same music. It's very rare in the world today that we connect with other people.

Speaking of music, what kind of music is your favourite?

I couldn't pick one kind. I like anything that has soul. I've been listening to a lot of Etta James. She's certainly soulful. There's soul in every genre of music. It comes from the heart, and it touches you in very deep places. Adele has a lot of soul. I love her very much.

You've announced that you wanted to concentrate on fine arts, so why did you decide to accept this job?

I'm working on fine arts... museum shows, galleries and exhibitions around the world. I had five museum exhibitions last year. I'm working on them right now. When I have time, I like to work on other projects. I like to keep busy. I like to do things that keep people I work with working. I like to keep those relationships fresh. My museum and gallery works have to come first, but if I have time, and it's the right opportunity and clients with a lot of freedom, I will do it. It's also very light-hearted and pop... and happy. It is a fun project that keeps me in the flow. I like to have one foot in the world, or else I get too isolated.

What would you like to do that you haven't done yet?

I'm working on this new series, "Paradise". It's this chapter of my life now that I am experiencing. It's joy and rebirth, utopia existence. I think it's easy to illustrate darker parts of humanity in contemporary arts. It's much more difficult to photograph the joyful and heavenly things. The miraculous things that we experience as human beings. Unphotographable. So I try to challenge myself to photograph metaphysical things that can't necessarily be photographed. The idea of paradise is a challenge.

So you believe in life after death?

I think the idea of paradise can be achieved in our lifetime, in little moments. We can work on the feelings of joy and moments of being in paradise when we're alive today. It takes times, attitude and gratitude to remember how fortunate we are to do all these things. I find that the dark side of humanity is taken more seriously in contemporary arts when the lighter side is also as important, but they're sometimes looked at as trivial. I disagree with that ideology.

Are you an optimist?

I'm thinking that I'm more of a realist. I'm much aware of what's going on in the world. Ultimately, I have to fight [against] being pessimistic, giving into anxiety, depression and things like that. It takes work. I'm prone to those feelings. It's very private. I would never show it to people. I try to escape from them by throwing myself at my work. My works are not dark, you know. Although, I might feel that way, I express the opposite. It's just something I work at. As I get older, I find more balance in my life. It's important for me to be in nature, to have downtime and to do simple things like exercising, which increases endorphins. That keeps me more stable-minded. Very simple ideas.

Do you have any social issues that you feel strongly about?

Through the pictures that I've taken, I always try to address things as social commentary. My works comment on materialism versus spirituality, which is a paradox because I worked on those magazines that are selling those ideas, shoes and handbags. And I think there's nothing wrong with that. There's nothing wrong with adornment, putting on make-up, making yourself beautiful. But when that becomes everything, when life becomes an episode of Sex And The City, we're living in a decadent time. We have to keep things in balance, and if we don't keep our spiritual lives alive... we're letting our happiness come with the next purchase or a bigger house. That, we know, doesn't lead to fulfilment.

Is that why you choose to live in Hawaii?

Yeah, that's why I live in Hawaii. I'm very lucky to be able to live in a place like that. But you don't have to find an exotic place to move to. I'm just lucky to be able to do that. When I was living in New York City growing up, I would always go to the countryside to have nature around me.

The standard of beauty changes over time. What do you think is beautiful?

I try to find beauty in unexpected places that other people may not see. When I was working a lot with fashion magazines, everybody was shooting supermodels, but I wasn't. I worked with other girls. Beauty comes in many different ways. I always try to use beauty as a tool to talk about things that are difficult to talk about or are confusing. Beauty is different for every person.

Your idea of beauty changes, but your core belief is still there.

What I do is try to take photos that I love, and hope other people will do too. When you come to a certain point of your life, you have to do what you believe in. I find that the only way. If I think about what others want, I'd just be confused. But I always think about where the images will be seen. I always want clarity [to express] what is it I want to say to people, how I can communicate as clearly as possible.

Even if it's a challenging, difficult subject, I always have to use beauty because people turn away from ugly.

Has your approach to photography changed since technology is changing all the time?

I've really embraced digital since very early on. Analogue or digital, it doesn't matter. Digital is better for the environment, more economical. I like shooting it because I get better clarity. But at the end, you can't tell the difference between the photos that I shoot analogue and the ones that I shoot with digital. People can't tell the difference. Two means to the same end.