On screen, the monstrous waves roar and strike like liquid thunder. Ewan McGregor and Naomi Watts, playing a couple with three young sons vacationing in southern Thailand in 2004, watch in horror as the tsunami slams on shore like a titanic fist and sweeps them away in torrential whirlpools, shattering their peace and threatening to change their lives forever. 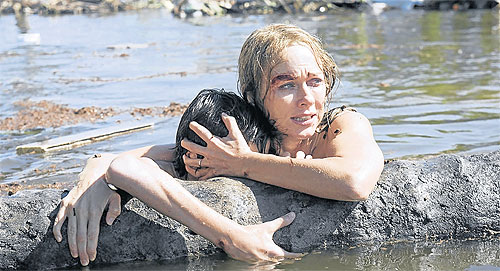 After nearly a decade, The Impossible attempts something extraordinary and risky: it is the first film that reconstructs, realistically, the experience of being hit and sucked and slapped around by the leviathan waves of 2004. It is a dramatisation of a nightmare that ambushes a family, and after the spectacle of aquatic terror the film also aims to celebrate the spirit of hope, survival and humanity.

I watched the film at the Tokyo International Film Festival, and there's a strange sensation _ not unpleasant, but ambivalent _ seeing the computer-generated waves crashing down on the people on the screen when, 20 months ago, we watched real, cataclysmic waves hit the northeast part of Japan and killing tens of thousands. In a way, the screening at the Tokyo festival was a test run for the film that, for obvious reasons, may prove sensitive to Japanese audiences. As of now, The Impossible still has no distribution deal in Japan.

The film will open in Thailand on November 29.

To be sure, The Impossible announces from the start that it's based on a true story; of course the 2004 disaster is real, but this means specifically the story of the five-member family that is depicted in the film.

In real life they're Spanish, which explains why, despite McGregor and Watts playing the British couple at the centre, the film is directed by Spanish Juan Antonio Bayona, whose first film was the chilling horror The Orphanage.

Before the screening in Tokyo this week, the film premiered in Toronto where the lead actors met the real family they portrayed. In fact, The Impossible's strength is its focus on the particulars of the event whose disastrous magnitude comes with facelessness and statistics: the entire film follows the Bennets _ Henry, Maria and their three sons, Lucas, Simon and Thomas _ and their ordeals right after the waves strike and the few days of emotional horror after that. We don't know how many deaths there are, and we don't hear that the tsunami strikes not just Thailand, but other countries in South and Southeast Asia. The film wants to show how a gigantic disaster affects individuals.

At the centre, however, is the re-creation of the Big Bang _ the moment when the waves hit. Clint Eastwood did that, half-heartedly, in his half-baked metaphysical drama Hereafter, and Bayona now ups that and goes all out for sheer, intense, wet, bloodied terror.

The trick seems transparent at first as we see the family arrive at a Khao Lak resort in southern Thailand, ready for the happiest Christmas vacation ever and, unlike us, unaware of the impending doom. Two days later, as the Bennets lounge around the pool, the Earth trembles, the Andaman roils and the wall of water comes crashing down.

I don't know if the effectiveness of the film-making is a blessing or a curse in case you lost friends or relatives in the 2004 tsunami. As you admire the realism of it all, you also feel the lump in your throat; our fascination with horror is one of the reasons why cinema exists.

Here Bayona reconstructs, from testimonies, the harrowing confusion when bodies are swooshed around underwater, like in a turbo washing machine, hitting wood and metal, and being stabbed by sticks and spikes. Maria (Watts) resurfaces to find her eldest son, Lucas, being swept along the muddy currents and together they manage to climb up a tree as the beachfront area becomes a wasteland of debris and muck.

A cemetery too, only they don't realise it then.

The rest of the film depicts the ensuing chaos at hospitals and shelters as Lucas tries to find his father and two brothers, while Maria awaits much-needed surgery on her lacerated chest and leg. Shooting on real location, the film has an authentic texture _ the provincial hospitals, the crowded corridors and the usually non-touristy spots of the South that suddenly become populated with scared tourists, still in their shorts and bikinis.

Confronting a nightmare is perhaps one way to overcome it. Soon after the 2004 tsunami, Thai film-makers made an ensemble of short films that approached the disaster and its aftermath from different angles, mostly oblique, and none had the means to feature even a mid-sized wave.

Last year, Sion Sono made Himizu, which opens with a scene of the dismal wreckage left by the March 2011 tsunami that struck Japan; again, no waves are seen in that film.

The Impossible _ just like recent films about the September 11, 2001, attacks _ has the advantage of budget and the buffer zone of time, a cushion that allows it to look back at the horror with eyes wide open. The virtuoso film-making of the wave sequence will beckon you to look, and still, you may also flinch. The antidote of terror, the film knows, is a miracle. We can only hope that, outside of the movies, we can also cherish the latter after the former befalls us.