Hearts in the darkness

Chris Coles _ in a book on noir and an ongoing exhibition at the Foreign Correspondents' Club of Thailand _ is one of the few artists to record the people and transactions of Bangkok's red light districts with all their vivid idiosyncrasies. He paints bright scenes in acrylics or watercolours, shapes the human form simply through thick black lines and captures some essential truths of a tawdry reality.

RECOGNISE ANYONE?: From far left to left:

American politician in the Bangkok night.

Girl from the Bangkok night.

Polish gentleman in the Bangkok night.

Part of a growing literary and artistic movement known as Bangkok noir, he adds his strokes of bounteous colour to a scene dominated by crime writers. Noir is often characterised by cynicism, fatalism and moral ambiguity _ a literal and figurative darkness for which Bangkok provides some fertile territory.

"The thing with black is that even when you scratch the surface, you can never find your mark. It vanishes like dreams, hope and love," writes author Christopher G Moore in the introduction to Navigating the Bangkok Noir, a book that collates a number of Coles' watercolours. What Coles does in his work is preserve the depicted noir before it fades.

Visually, the watercolours in the book are simple. Many look like they've been painted from photographs, with subjects posing. The more recent acrylic works of the FCCT exhibition, "Paintings from the Bangkok Night", are large profiles or tapestries of massage parlours and girl-bar strips, more detailed than those in the book and almost mesmeric in their alternating colours.

Few people are ambivalent about the red light districts, yet they are under-represented artistically. Berlin nightlife was a prime subject matter for German expressionists such as Emil Nolde in the 1920s, as was Montmartre for Henri de Toulouse-Lautrec and others in the late 19th century. Bangkok's red light districts haven't evolved the same mystique for artists.

Collectively, Coles' paintings and their captions shed some light on an underexposed side of Bangkok that attracts and repels, and its patrons have never been rendered so humanly.

His prostitutes have names and children, histories and dreams: "But she has seen too much, known too many men, danced too many nights. Her only desire is to go back to her hometown, take care of her 10-year-old son and live out the rest of this life in quiet, hoping the next cycle will be better."

His johns, punters and marks likewise have personal needs and insufficiencies: "They need her as much as anything else in their industrialised lives and will dream of her in their old age." 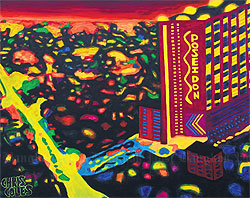 In the captions are occasional touches of poetry to add to those dabbed across his variegated canvas of the Bangkok night ("her whispered Thai words flowing across Bangkok's multi-layered spectrum as she weaves her multiple webs"), and some harsh realities ("no matter how wonderful the girls, how full of beauty, depth and soul, money determines the outcome").

To understand Bangkok it helps to understand such places; on the other hand, such places are not Bangkok; the city holds much more even under the banner of noir _ the police, the gangsters, the temples, the bribes, the waterways, gateways and getaways, beggars, the street life, the homeless, the illegal. Away from the darkness, the human landscape of the megalopolis can be varied and subtle, warm and compelling.

Depicted here is sexpat territory, the "neon triangle" of Patpong, Nana and Cowboy, along with a few other illicit parts of Bangkok. Coles in an afterward mentions that the Japanese, Arabs, Indians, Chinese, Nigerians and other groups have their own enclaves contributing to the Bangkok night. Yes, but it would also be nice to get beyond such enclaves. One of the book's negatives lies in its singular focus. There is also an occasional presumption that the Bangkok night equates to Bangkok as a whole, that red-light quirks can arise anywhere in the capital.

"If ... you ask, do you provide service, and they answer yes, it means they're available for sex, even if you didn't mean to ask. Whether in a department store, coffee shop, snooker place, barber shop, gas station or dry cleaner." Another such comment is "getting a haircut can mean more than one thing".

To 99.99% of Bangkokians, such terms hold no illicit secondary meanings. Other books on Bangkok's girl-bar scene often make similar generalisations about the city based on its sex trade, and thus rather than shedding light on an underexposed facet of local culture contribute to the many misunderstandings and occasional resentments between Thais and tourists.

Navigating the Bangkok Noir and "Paintings from the Bangkok Night", however, constructively add to the discussion. There is a captivating distance, a loving objectivity in some of the colours and words.

"If they are stylish, clever and speak enough English, they can end up in London, Beverly Hills or Sydney, living in a big house and driving a Mercedes. Or they can end up nowhere, too old, with too much mileage, unloved, their dreams of a better life unfulfilled," Coles writes.

And there is some perspective provided for those who look down on the sex workers: "No matter who and where we are in life we are all holding onto a pole and we are all for sale and we must examine our lives."

Decades and centuries from now these paintings may be among the few remaining records of a side of Bangkok that would otherwise have been swept under the carpet, its people and scenes faded into the darkness. For present and future these are creative noirish studies of a fascinating age.

'Paintings from the Bangkok Night' shows until Jan 15 at the Foreign Correspondents' Club of Thailand, Maneeya Centre, BTS Chidlom, open noon to 10pm on weekdays.

'Navigating the Bangkok Noir', by Chris Coles, is available from all good bookshops for 500 baht. 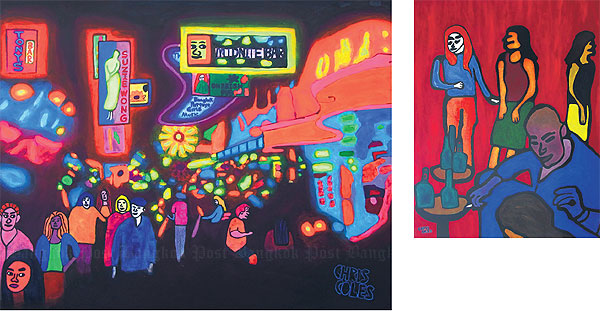 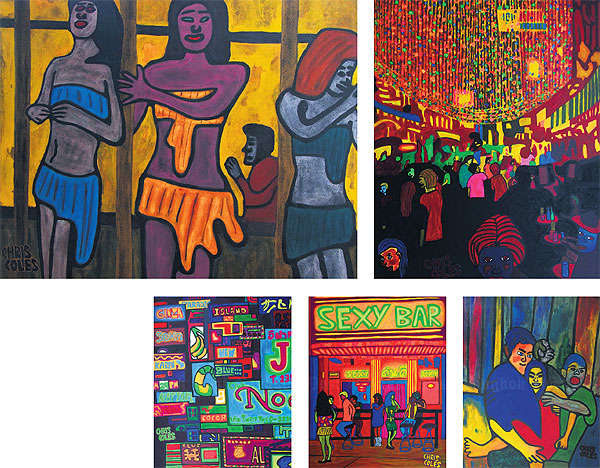 WHERE THE WILD THINGS ARE: