Model Siranpas "Mew" Kongtrakan says she is happy to pose as the sexy car-wash girl at functions, as long as her mum says its alright. 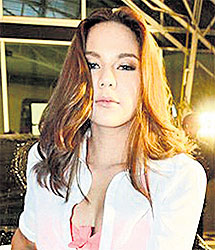 Mew appeared at a function to promote car cleaning products last week, where she stripped down to the bare essentials and cavorted over a wet car.

Two days before, actress and model Supaksorn "Kratae" Chaimongkol strutted her stuff as a bike-wash girl at a city department store.

One newspaper hailed the New Year as the season when models at industry events bend to wash cars while thrusting their bottoms in the air.

Mew said it was her first time as a sexy car-wash girl, and she thought long and hard before agreeing to the job.

Mew said she took advice on her moves from Kratae.

"Pi Kratae told me not to spread my legs too much, as it may not look too pretty," she said.

Kratae was the sexy drawcard of the Bangkok Motorbike Festival at CentralWorld on Tuesday. One unkind gossip magazine ran a picture of her rear end as she appeared to trip on a large motorbike she was washing.

Mew said Kratae's advice helped, as she had to overcome nerves. 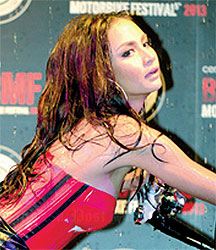 "I felt embarrassed, as there were so many cameras about, and I didn't know where they were looking," she said.

She would be happy to take such work again, despite the jitters.

Media outlets ran lavish spreads of Mew and Kratae washing their vehicles. Kratae, who said it was also her first time washing a vehicle for a crowd, said she rehearsed her moves about five times.

"I thought for a while before accepting the work, but when I went to start washing, it felt nice and cold," she said.

"I took precautions by wearing stockings and an extra layer underneath my shorts. During rehearsals, someone watched my moves to make sure I didn't show too much.

Not the giving type

Actor Nawat "Pong" Kulrattanarak skipped New Year celebrations with his girlfriend, and says he has also yet to think about buying a Valentine's Day present for her.

"New Year's Day is just another day _ do we have to give each other presents as well?" he asked reporters last week.

Pong said he spent the holiday diving with friends in Koh Tao. He did not take his girlfriend, Jarinya "Kaew" Sirimongkolsakul, with him.

The actor last year declared he was prepared to regard Kaew as his girlfriend, after keeping her waiting for months.

Pong, 34, a notorious Romeo, had promised that when Kaew turned 20, as she did in June, that he would finally anoint her as his girlfriend.

The two met the previous July.

The day came and went without any change, though Pong later relented and the two are now officially an item, though without the romance many young women might expect of an older suitor.

Explaining his apparent indifference, Pong said he is not the type who likes to make a fuss.

"I'm not the sweet type. We didn't spend New Year together, but I don't regret it. I'm passed that age now. We can meet any time.

"It's not as if we meet on New Year and have to feel better about each other than any other day," he said.

"We seldom post pictures on Instagram either, but as I say, I'm not the sort who feels the need to make announcements to the world. We're just going out normally," he said.

Asked about news reports linking him with various lady loves, Pong said he is always willing to discuss the rumours with Kaew.

"If I had to sit down and correct every news report which came long, I'd get tired soon enough. But we can still talk," he said.

It was natural that Kaew's parents should worry about her, as she was barely out of her teens.

"Occasionally they might advise me: 'Don't come home too late!"' he said.

Asked if he would consider buying Kaew a Valentine's Day present after missing New Year, Pong said it was probably a good idea.

"Exchanging gifts might be a good thing. But I don't know if I'll be busy with work.

"If we're not busy, we can probably meet. But I haven't given her anything yet," he said, laughing.

Keep me away from Carabao craziness

DJ Pakamas "Gay" Wangboon has sworn to avoid song-for-life concerts from now on after a teen fight broke out during Ad Carabao's concert in Bangkok last week.

"I've learnt my lesson. I'm not going to any more song-for-life concerts again _ not because of the artist, or the songs, but the security. Police couldn't control the event. Many were sitting around as if nothing had happened," she wrote on the internet. 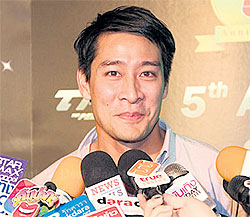 Two rival groups of teenagers clashed at a charity concert in Klong Toey by folk musician Ad Carabao and rocker Sek Loso on Monday, forcing an early end to the show.

A team of 700 police were deployed to stop the riot and used tear-gas on the mob. Four people were injured.

While some netizens have criticised police for using tear-gas, Gay said the police she saw barely stirred themselves.

"How could they let these young people run amok, challenging their authority as if they weren't scared of a thing. The police were so calm and composed, it was disappointing."

Gay said she and three friends asked police to take them to the shelter of a nearby carpark.

"One policeman looked at me as if to say, 'Don't bother me, would you?'

"They should have shown a little generosity, and offered to escort us. The carpark was less than 300m away. One policeman said: 'Keep walking. It's nothing.'

"I asked: 'Can you take us, please?' He replied: 'Keep walking. They won't do anything to a woman!'

"We were just four ordinary people, not bigwigs or VIPs. There was no need to form a squad or take us there in a big, over-the-top security detail.

"All we wanted is to feel a little safety and warmth from the police at a time of crisis," she said.

Metropolitan Police Division 5 deputy, Pol Col Jak Jittatam, said police were unable to control the crowd because teens were firing objects into the stadium from the street outside. He insisted police responded by the book.

"Every time Ad Carabao puts on a concert, trouble usually follows," he said.

Teen fighting broke out at a concert by another song for life veteran, folk musician Pongsit "Poo" Kampee, in Bangkok last month.

Four people including a soundman were injured in the fighting, which injured four people and forced the concert to an early end.

No blemishes on her record

Jazz told the media last week that she contemplated taking her own life after her face developed a reaction to cosmetics and broke out in spots.

The transsexual beauty pageant winner went before reporters last week after dipping out of the public spotlight for months.

"I didn't go out anywhere, because I was covered in spots and felt so defeated I just wanted to kill myself," she said. 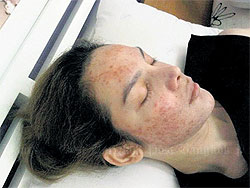 "Using the wrong makeup can have a devastating impact on your life," she added. "I cancelled work worth hundreds of thousands of baht."

Netizens rounded on Jazz, saying the story about her face breaking out was a thinly-veiled attempt to promote her own brand of skin cream.

Responding on Facebook, Jazz defended her decision to open up about her plight, and denied trying to hoodwink consumers.

"I went to pay New Year's greetings to the media, and reporters asked where I'd been for so long," she wrote.

"I took along some pictures of my face and reporters asked if they could publish my ordeal as an example to others about the dangers of using strong make-up.

"Yes, I sell my own brand of skin cream. But consumers can buy it or not; it's up to them. I'm not trying to con anyone. While my face is back to normal now, I still get an allergic reaction at times, as my face was exposed to strong chemicals," she said.