From the remains of suicide bombers to geopolitical divides, the visceral nature and realist purity of some of the works on display at 'Crossing Over' make this an unusually thought-provoking exhibition

Marco Evaristti is an artist who seems to like getting arrested. From scaling icebergs and spray-painting them red to serving up meatballs made using his own body fat, Evaristti is no stranger to controversy. Born in Chile, educated in Denmark and from a mixed Israeli, Russian and Italian background, Marco now divides his time between Bangkok and Copenhagen. Born into Judaism, he later converted to Buddhism. 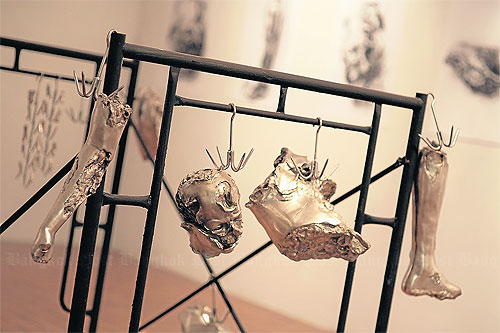 His latest exhibition, "Crossing Over", currently on display at the National Gallery, is perhaps an extension of the artist himself as he blurs the line between religions and vaults geographic barriers.

Marco exudes warmth and musicality, surprising traits in an artist who not only pushes boundaries, but sometimes forcibly rips them down. One is intrigued to learn more about a man who made international headlines in 2000 for "animal cruelty", after a visitor decided to press the button and liquidise the goldfish he had put in a Moulinex blender as part of his "Helena" exhibition.

Other controversial exhibitions include "Crash", back in 1995, in which he used blood from Bangkok traffic-accident victims in lieu of paint in order to draw attention to the dire situation on the capital's roads.

The first part of "Crossing Over" is a showcase of both his architectural talent and his passion for Thai design. It features room designs and examples of locally produced furniture he created for the new U Hotel, due to open in Sukhumvit later this year. It is clear that the extensive amount of time Marco has spent in Thailand has rubbed off on him since the hotel's themed rooms acknowledge a host of style influences from the North, East and South. 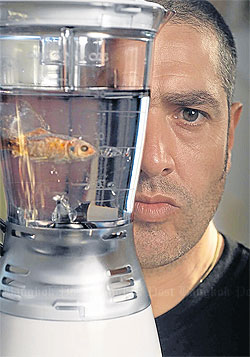 Themes of geographic "ownership", politically motivated hatred and the environment are central to his oeuvre and "Crossing Over" treads that line.

A bronze casting entitled Terrorialista features a disarticulated body. Fragments of teeth, a contorted face and a torso dangling off meat hooks. Marco modelled this work on a photo of the remains of a suicide bomber and his victims, creating "one" body to accentuate the futility of politically based conflicts.

This sculpture, glinting golden under the dim lights of the gallery, possesses an impressive physicality and serves as a poignant reminder of the brevity of life and the senselessness of geopolitical and religious divides.

What is striking about this show is the visceral nature and realist purity of the artwork. By confronting viewers with the "real", such as the mangled body of the suicide bomber and his victims, the audience becomes an active participant and is forced to confront societal taboos. This is what Marco means by "crossing over".

As an artist, Marco seems to work like the water that makes watercolours bleed into each other, turning what was solid and expected into something new and amorphous. Provocative he certainly is, and yet profound, too.

Let's start with that goldfish in the Moulinex and your "Helena" exhibition back in 2000. Did you expect anyone to press the button?

No, I didn't. It was interesting as it divided people into three groups _ the sadists, the voyeurs and the moralists. It asks, which [group] do we belong to? One of the examples I gave in my defence was that if I were to sell you a car, and then you went out and killed people, is it my fault? I sold you the machine, but am I responsible? Of course, I was let off!

Would you consider yourself a shock artist?

No, but that name doesn't offend me. I want to create dialogue and conversation. I want people to go home and think about what they have seen.

You have recently opened a studio space in Bangkok. Why here?

I like big cities. I first visited Bangkok in 1995. I had a successful exhibition called "Crash" and studied Buddhism for 11 months. I love Buddhism as a way of life. I have a friend who, every week, goes to the market and buys seven fish and then goes to the river and releases them. I think that is a beautiful way of life. Now I split my time between Denmark and Bangkok and spend about eight days of the month here. I feel cleaner here.

Where did you find the body for Terrorialista, the sculpture of a dismembered terrorist?

Jerusalem, but that doesn't matter. Here, I have made one body from the remains of both the suicide bomber and the victims. They are the same. They fight each other because they have been told the other is wrong. This idea comes from a larger project called "Brotherhood", which was an attempt to unite what culturally, historically and religiously has divided people, making them enemies by definition. Essentially, we all came from the same tree in Africa; everything belongs to us. You can't say you own land because you were born there. In death we are all equal. Why not treat each other as equals when we are alive?

Were you emotionally affected while creating that piece?

I was detached. It may seem morbid, but it makes me appreciate living more. You can't realise the meaning of life without death.

So this breaking down of boundaries is a theme that permeates your work?

Yes. I like to put reality into my art and that's why, for example, I used my own blood to draw the skulls. Then it's not just an interpretation; it becomes reality itself. I become closer to the audience and also to myself and the audience comes closer to confronting reality.

Your artwork Trilogy, when you painted an iceberg red, rejects territorial expressions of power and draws attention to the benign restrictions society places on us. Did you ask permission to "decorate" those landmarks?

No, why should I ask permission? Nature belongs to us. It is ours to decorate. If I were married to you I would want to decorate you and give you a ring and a necklace. It is the same. The governments came in and arrested me. They told me I had to get rid of it and I told them [I would do so] only when they stop dumping atomic waste and contaminating the environment. Of course, they let me go. I used an extremely concentrated red food dye made from berries, so it wasn't polluting. Greenpeace actually supported me as it drew attention to these environmental issues.

What made you choose the colour red and those locations?

I chose red as it is so symbolic and means many things: love, anger, blood. And it is the most beautiful colour against the sky. I chose the locations because they are iconic. And, secondly, because they were close to me. Mont Blanc is the highest point to me. The Sahara, the hottest and driest. Greenland, the coldest.

What issues do you address in "Crossing Over"?

The environment, politics and religion. These are three really bad things for us. Especially religion. Religion dictates politics. For example, we cannot have a Muslim president in Denmark. Also, taboos. We are so completely full of taboos, everything is taboo; we are not allowed to show pornography, for example. Why? It is a public space, but if you go to Patpong... there is this double morality. I think it is important for my work to create dialogue and conversation. What I want is for people to come and see what I do, then go home and think. 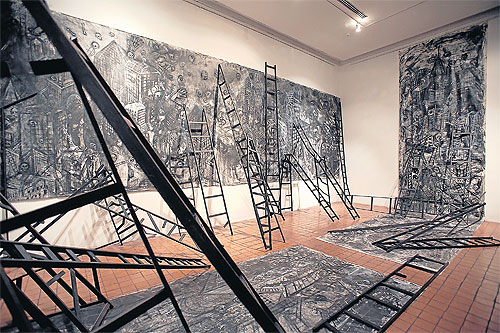