Phaptawan Suwannakudt's work will be on display as part of the Australian capital's Chinese New Year celebrations, a global stage for a woman who once had trouble being taken seriously amid chauvinism in her home country

Phaptawan Suwannakudt battled discrimination in what was once Thailand's male-dominated art scene to become one of the Kingdom's first prominent female professional artists. Now her talents will be on display on the global stage in a special exhibition that will form part of Chinese New Year celebrations in Sydney, Australia. The exhibition featuring one of her works, "Snake Snake Snake", will be held at Sydney Town Hall until next Saturday. 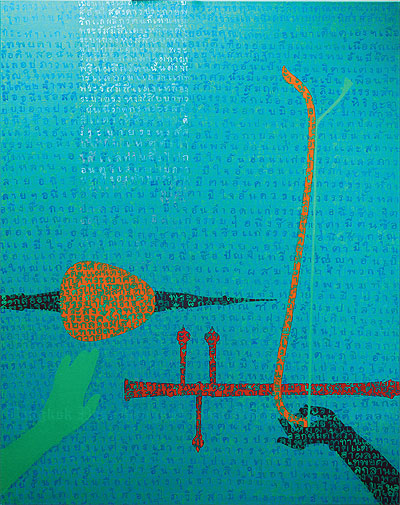 Gill Minervini, who oversaw the creative content for this year's New Year celebrations, said that one of her goals is to promote the contemporary Asian art scene. "Phaptawan's work makes this a very rounded exhibition; her works are very beautiful," she said.

Born in 1959, Phaptawan has, in addition to her own body of work, organised art exhibitions for other women in Bangkok, including "Womanifesto" in 1997.

But the road to acceptance in the art world was not an easy one. Early on in her career she found it difficult to be taken seriously by her contemporaries.

Her father, Paiboon Suwannakudt, was an established temple painter who fostered her artistic ambitions by letting her sit by his side while he taught her how to illustrate Buddhist narratives. However, when it came to formal schooling, the mores of the times meant she was encouraged to study language, majoring in English, rather than receive a formal arts education.

The course of her life changed and her artistic vocation was set in stone after her father fell ill with cancer and she was brought in to complete his paintings.

Shortly afterwards, Phaptawan's career blossomed with her own commission offers and she worked as a freelance artist in traditional Thai paintings, including murals.

As her father's successor, she would begin to receive the respect that had previously been lacking and worked extensively in Thailand for 15 years.

Her featured painting at this year's "Snake Snake Snake" exhibition is called Bhava 5, meaning "the state of being", and is one of a series of seven pieces. Using acrylics on canvas, Phaptawan employed the technique of layering icons, figures and texts derived from the teachings of Buddhist monks. "It's a representation of a person who's come from a different background, relating to their new environment," she says.

For Phaptawan, making connections between old and new surroundings started in 1996, when she first moved to Australia, and this forms a running theme throughout many of her works. She believes that her artworks can be communicated to people outside of her background. "There are no boundaries between Thai and non-Thai art, but art cannot be separated from life." 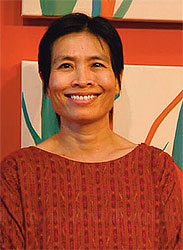 Phaptawan's message is integral to the aims of the "Snake Snake Snake" exhibition, which endeavours to explore notions of cultural heritage, travel and identity.

Ms Minervini makes clear that the Sydney Chinese New Year Festival is a celebration of other cultures within a wider artistic context, including theatre, music and dance. "There's an incredibly dynamic and fresh art scene across Asia that's in all art forms," she said. Such artistic exchanges, she added, promote emerging as well as established artists and build a stronger relationship between Australian and Asian cultures. At last year's festival there was a 20% increase in attendance above the previous year.

Ms Minervini said her idea to stage the "Snake Snake Snake" exhibition stemmed from the success of a contemporary art exhibition held at the Red Gate Gallery in Beijing. This exhibition inspired her to bring a similar opportunity back to Australia for international artists to stage their works. "It's very much about exposing contemporary Asian culture in a Sydney context," she says.

Catherine Croll, founding director of Cultural Partnerships Australia, is curator of the "Snake Snake Snake" exhibition and meticulously selected the artworks. She spent three months researching Asian Australian artists who then went before a selection committee. Phaptawan is one of 45 artists featured out of more than 150 entries.

Ms Croll first noticed Phaptawan's work at a Gallery 4A project titled "Edge of Elsewhere". "I was impressed by the strength of her imagery and her use of symbolism, so I was keen to invite her to participate," says Ms Croll. "I love the way she uses a wide range of materials to portray her message and the amount of thought and layered symbolism she incorporates into her work."

She feels that Phaptawan's work provides a perfect piece to the exhibition. "My aim in staging the exhibition was to show the broadest range of Asian Australian contemporary work, incorporating an eclectic mix of painting, sculpture, installation, video and photography," says Ms Croll. "I believe the collective artworks provide audiences with the unique opportunity to explore a variety of common issues which affect Asian Australians _ including individual journeys, and concepts of 'home'."

Phaptawan's individual journey has allowed her to witness a rapid shift in women's roles within the art world in Thailand _ from hardly existent, to leaders within their traditional and contemporary fields.

She thinks that in general Thailand has "moved on to a more modern, broad-minded society ... the gap of equality is narrower. Now when I go to Thailand people accept me as an artist."

Her 16-year-old daughter seems to be following in her mother's footsteps and is studying visual arts and design. Phaptawan says her 13-year-old son is just as creative.

The "Snake Snake Snake" exhibition displays the works of artists with Asian heritage residing in all states and territories of Australia. Another Thai artist, Somchai Charoen, is also featured, with a piece titled Keep Out 2. The exhibition also presents talks and forums that delve into the personal stories behind the art, intended to contribute to building understanding of issues affecting Asian-Australians in the broader community.

‘Keep Out 2’ by Somchai Charoen