Wong Kar-wai's long-awaited biopic of Yip Man is an elegant, elegiac and soulful romance of the kung fu kingdom. It's a swirl of movements, limbs, smoke, droplets, embroidered hems; the fighting is a cubist deconstruction of fists and legs, more sensuous than violent, all atmospheric, a state of mind rather than a corporal brawl. 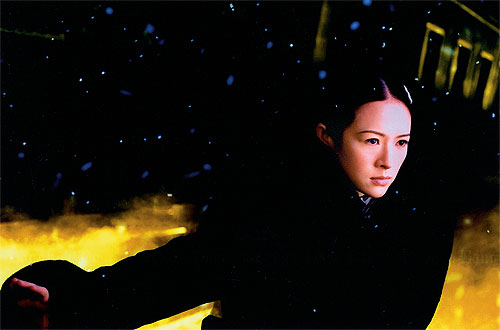 Zhang Ziyi plays the revenge-seeking Gong Er in The Grandmaster .

In short, The Grandmaster will leave hard-core kickboxing fanboys who adore the earlier version of Yip Man starring Donnie Yen in perpetual yawn. Wong gives us an unlikely combination: a sad martial arts movie, in which heartbreak is more resonant than the cracking of bones. This is not unexpected from the director of Fallen Angels, In The Mood For Love, 2046, or more to the point, Ashes Of Time, a melancholic kung fu drama that pre-cursored the mournful air of The Grandmaster.

By making fist-fighting so abstract, or at least a blur of impressionism, Wong and his martial arts choreographer Yuen Wo-ping move beyond the demonstration of skills into _ when they succeed _ meditative reverie. If this is just another side on the Orientalism coin, so be it: no one can make combative, hand-to-hand scuffle as romantic as Wong does, especially when his fighters are swathed in a classical wardrobe of pre-war cheongsam, Bolshevik-inspired fur and post-war noir-gangster jackets. When two fighters face-off in a do-or-die match at a snow-covered train station and spar without taking off their lush winter coats, looking exquisite in the heat of vengeance _ the opening, a slow-mo-heavy fight in the rain is much cited, though this one in snowflakes is much more stirring _ we know it's enough to watch The Grandmaster solely for such display of tasteful conceit, and nothing else.

In those beautiful clothes are warriors tough of mind and soft of manner. Tony Leung Chui-Wei plays Yip Man, first seen as a 40-year-old kung fu expert, bourgeoise, happily married and entrusted with carrying the torch of his southern fighting style into an honour match with an ageing, respected master from the North.

Soon it becomes clear that Yip Man, despite being the grandmaster of the title, is not the sole virtuoso of this tale: Gong Er, played by Zhang Ziyi, daughter of the northern master, enters the foray like a repressed wildcat. Gong's duel with Yip in a gilded house resembles a courting dance, their motion poeticised by Philippe Le Sourd's cinematography and fragmented into a continuous twirl. Yip Man is best known in general context as the mentor of Bruce Lee, the man who made kung fu so realistic. But in The Grandmaster, the fight is chimerical, elusive, misty _ it's a romancing of the fist, and the martial arts exist as much in the head as in the flurry of the action.

Like in Crouching Tiger Hidden Dragon that made her famous over a decade ago, Zhang plays a woman who wishes she could spiritually become a man. To beat her way to the top, she has to sacrifice the qualities associated with womanhood, and that's perhaps the saddest thing of all. After that fight with Yip, Gong, or Zhang, almost usurps the whole film as we follow her in her quest for revenge against her father's estranged protege (which leads to that Dr Zhivago-inspired fight scene in the snow), and at one point without warning, The Grandmaster morphs itself into something that Wong has always been famous for: a love story saturated with longing and unrequited emotion. To some, this is not what a kung fu film is supposed to be. To admirers, such wistfulness is a pleasant surprise and the real strength of the film.

In the early 2000s, young filmmakers around the world, and particularly in Southeast Asia, in an awestruck daze, started imitating Wong's romantic vision of loneliness and the sweet hurt of unfulfilled romance; watch how a camera lingers like a stubborn lover on the image of coiling smoke, or the rustle of clothes, or the face of the unattainable.

At his best, Wong's movies have the quality of music: style is content, the melody is the subject. When not at its peak, the self-consciousness of form can feel like a drag, and we feel a bit of that here. The Grandmaster has scenes that are utterly irrelevant and hardly serve any narrative purposes _ for instance, the much-wowed opening fight in the rain, with Lueng Chui-Wei doing The Matrix against a mob of lesser warriors.

But the most jarring note here is the Chang Chen character "The Razor": first seen fleeing Japanese soldiers and later in post-war Hong Kong, this swift, handsome fighter has nothing to do with Gong, Yip or the rest of the film, and we wonder if Wong is too stingy, or too generous, to leave him out.

What I feared before seeing The Grandmaster was that the film would be an unintentional parody of the director's own famous style, that the interminably coiling smoke would become too much. But Wong's touch remains deft, his whims trustworthy, and his indulgence is still carried over from the screen and becomes our own.