The English translation of The Tale of Khun Chang Khun Phaen by Chris Baker and Pasuk Phongpaichit has won the Becker Prize awarded by the Association of Asian Studies. The award was announced at the Association's annual conference in San Diego, California, on March 22. 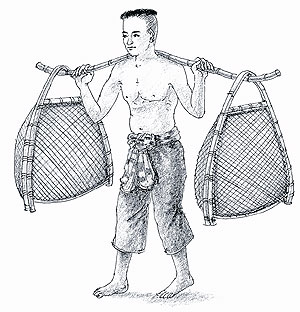 The annual prize, named after a famous translator of Indonesian literature, is awarded for an outstanding translation of Southeast Asian literature. This is the first time the prize was awarded in open competition.

The prize citation calls the translation "a tour de force". "It arguably represents the greatest achievement to date in the field of Southeast literary translation, providing access in English to a well-known but otherwise esoteric traditional verse text which even native Thai speakers find inaccessible... Rendering this linguistically complex literary work into English has not simply been an act of mechanical translation but rather a seven-year-long project of intellectual rigour based on historical and linguistic research. The result is an invaluable contribution to out knowledge of traditional Siamese literature. Not to mention, a gripping read."

The translation, published by Silkworm Books, Chiang Mai, in 2010, is based on the standard "Library Edition" edited by Prince Damrong Rajanubhab, but also includes many passages from earlier versions. Besides the text, the publication has 400 original illustrations by Muangsing Janchai from Suphan Buri, over 2,000 footnotes, maps of all places visited by the characters, identification of over 200 plants and 100 animals mentioned in the text, and an essay on the history and significance of the work. The translation is already used in courses on Southeast Asian culture and on world literature in several universities around the world.

Baker, who also contributes book reviews for this newspaper, says: "It's great to have won a prize for something that was such fun to do. Khun Chang Khun Phaen is probably the only old Thai literary work that comes from popular tradition."

Pasuk adds, "It's a great story of love, war, rich and poor, success and tragedy, packed with many details of Thai culture that have been forgotten. We hope the prize will tempt a few more people to enjoy it."

Pasuk is Emeritus Professor in Political Economy at Chulalongkorn University. Baker formerly taught Asian history and politics at Cambridge University, UK, and has lived in Thailand for more than 30 years. They have also translated works by King Rama V, Pridi Banomyong, the Communist Party of Thailand and others.