Coffin up cats and dogs

Poo is to blame for this. Saiyuud Diwong's brilliantly titled Cooking With Poo is the reason I am contemplating making a coffin for a dog knitted from carefully collected cat hairs. The Klong Toey cooking guru is the reason I now think of Richard Branson when I pee. 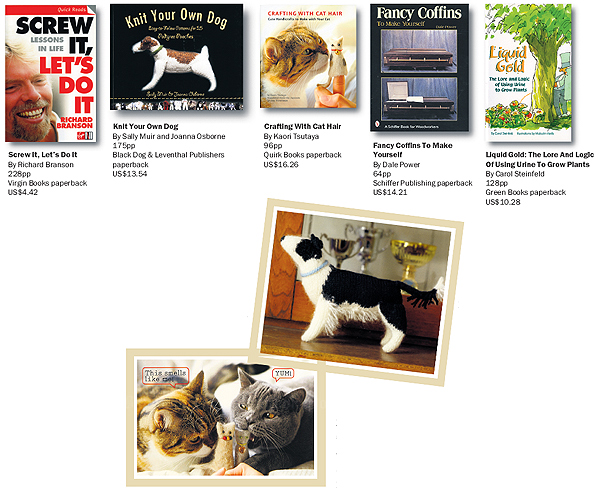 Let's rewind. Late in 2011, stalking a bookstore in Australia, Cooking With Poo grabbed my scatterbrained attention for the same reason it caught everyone's eye. I dutifully laughed, pointed it out to my girlfriend, and, like the brainless zombie slave of Mark Zuckerberg that I am, snapped a photo for posterity and adulation on Facebook.

A former Canberra colleague, Ari Hall, found Cooking With Poo so hilarious he bought a copy online. His young children took delight in the title and he reported that the meals were delicious.

So far, so what, you might think. And you're right: this sequence of events caused no glitches in the Matrix, as far as I'm aware.

Then I moved here. A few months later a package from an anonymous sender arrived at the Bangkok Post office. It contained Screw It, Let's Do It, the penetrating insights of Richard Branson in book format.

On the same day came another thick, brown cardboard envelope. Knit Your Own Dog. Right then. What could this mean? It doesn't get much more cryptic unless you're doing a crossword in a crypt.

After a bit of befuddlement wondering who in this or any other world would want me to knit my own dog, pausing only to admire the design of the border collie, I noticed the receipts. Hall introduced me to the website the books were purchased from, one offering low prices and free shipping anywhere in the world, so he became suspect No.1.

Months passed and the books sat around, laughed at, but unread. (No dogs were stitched up in the making of this yarn.) They were nearly forgotten until another two packages turned up. Fancy Coffins To Make Yourself by Dale Power and Crafting With Cat Hair by Kaori Tsutaya. The day after, there was a fifth: Liquid Gold: The Lore And Logic Of Using Urine To Grow Plants by Carol Steinfeld. Now Hall was really taking the piss.

These deliveries made me laugh and brightened my days, but left me wondering what was expected of me. Should I pick up a pair of knitting needles and fashion myself a woollen English sheepdog? Make a tiny tote bag out of cat hair? Urinate on my girlfriend's orange tree? Get out the saw and hammer and fashion a coffin for my sanity (which is in terminal decline and bound to depart any day now)? Or was he after some wicked and incredibly complicated combination of all the above?

Ah, let's do it, there was only one answer and I knew it. I opened the books.

Branson's slim volume of lessons in life takes barely two hours to read and probably didn't take much longer to type. Straddling the manic and the maniacal, it is a barrage of upbeat positivity and can-do enthusiasm that battered the shrivelled, cynical side of my soul to the point where I started enjoying myself. The infectious and irritating (if you'll forgive such a rash assessment) 106 pages zip along with self-help phrases, anecdotes and the odd attempt at modesty. The nagging thought "well, Branson, you can afford to say that" does itch away when reading about a billionaire's successes.

But it's hard not to be charmed by a man who can go from "he was rescued just before he froze to death" to "the whole trip was an amazing experience" without seeming to pause for breath. Or thought, for that matter.

Sally Muir and Joanna Osborne's opus Knit Your Own Dog has even fewer pearls of wisdom, but the purls are on show in pictures of the 25 canines they have created. It's very cute, and as the authors exhorted me to "stitch your bitch" in the introduction, a pair of knitting needles has found its way to the condo.

But like a dog that's finally caught his own tail, I have no idea what to do next.

Translated from the Japanese, which says it all, really, Crafting With Cat Hair promises quirky projects made from clumps of fur your feline friend has left around the house or all over your clothes. Making finger puppets, book covers, tote bags, mittens and scarves from discarded cat hair sounds revolting to me, but fortunately there is enough humour to undermine the creepiness.

Not entirely helpfully, there's a warning on page 58: "These crafts are not recommended for people with cat allergies." Apart from being eye-bleedingly obvious, no one allergic to car hair would have survived the previous 57 pages of instruction _ they would have been dead before they'd completed a single coin purse.

Fancy Coffins provides help for "one of life's most critical undertakings" and Power says coffin making "has always been a grave matter". Those two phrases are the best parts of the book, mainly pictures and carpentry instructions. There's no point reading further unless you intend to knock together a final resting place for yourself or your nearest and dearest loved ones and enemies.

Last was Liquid Gold, which does offer a couple of hours of reading material along with slightly troubling images of smiling people pouring pee on their pot plants. As soon as I sat down at a cafe and opened the book, I heard the call of nature. I may have also made a mistake ordering a golden lemon squash.

Steinfeld, who is a project director at environmental advocacy non-profit group Ecowaters, go figure, puts the case that we are pissing away amber gold, that urine can be sustainably recycled as fertiliser. At the start there's a snapshot of how urine has been used and ingested throughout history in industry, rituals and medicine.

"There appear to be no well-controlled studies that show that urine therapy can cure life-threatening internal diseases, only anecdotal reports." There should be an award for an author who can construct a sentence like that.

I will admit to skipping the section "Carbon matching for the hardcore urine user". It just didn't seem applicable to my life right at this moment. The hardcore are featured, however, with multiple examples of gardens thriving because of the golden touch. Peeing is believing, apparently.

Reading of the trials and research already taking place, much of it in Sweden, is interesting. Steinfeld is not entirely convincing, and a few loopy "web of life and energy" phrases filter through. Still, it makes you wonder if wide-scale urine recycling could become reality, even if it does sound like a brain fart from the Bear Grylls school of resource management.

Thanks to Hall, I am wondering if Branson's just-have-fun business advice can be applied to knitting a coffin with a urine diverter to water the plants that I grow to feed a vegetarian cat that sheds its fur so I can make pin cushions.

Time to mete out some revenge. Credit card willing, a couple of ominous brown envelopes will soon turn up at his workplace. Inside will be copies of Scrambled Brains: A Cooking Guide For The Reality Impaired, since that's how he's left me feeling, and Grow Your Own Drugs, in the hope that one way or another it messes with his mind.

All books are available at www.bookdepository.co.uk