A new campaign by the Tourism Authority of Thailand (TAT) that targets foreign gay and lesbian travellers is so tactful in its methods that any criticism of its rhetoric could seem churlish. 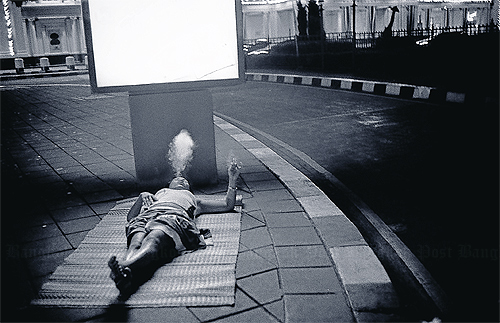 A photograph by Cherdwood Sakolaya, part of the ‘Night Shift’ exhibition.

We see pictures of happy gay couples strolling along a Bangkok pier and lounging amidst a beachside idyll; the models are "ordinary" _ no gym-queens, for instance _ and the images avoid stupid stereotypes about mixed-race partners. Moreover, the accompanying blurb isn't shy about mentioning the sleaze-pits of Patpong and Saphan Kwai alongside ostensibly more enriching cultural experiences to be had in this country.

The slogan of the campaign is "Go Thai, Be Free", the people depicted are, well, just like me and you, and the options available are variable. Again, to criticise this campaign might seem a bit hasty, or overly nasty. Sincerity surely usurps critical judgement.

However, Thailand's much vaunted and long-standing acceptance or tolerance of queer communities belies a complex undercurrent: how do, or can, these communities challenge the very structures that hold them in this state of "acceptance" or "tolerance" and therefore do not treat them as completely equal; for example, normative notions of family life? 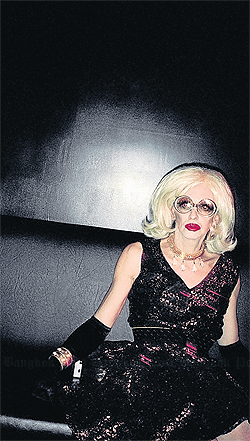 One of Benya Hegenbarth’s images of Bangkok after dark.

In this respect, the neutral patina of TAT's campaign takes on an ominous aura, a benignity that could be part of the problem of what it means to establish a truly diverse and welcoming society. Or, in other words, why not publicise pictures of old, fat white men with gorgeous Thai guys, or vacant-eyed muscle queens or hard-drinking lesbians "acting like men" (so I've been told) in go-go bars? Queer is not queer if it is not queer.

I ask this, not because issues of "accuracy" or "truth" should matter when it comes to the world of images, but because a healthy, progressive society needs to face up to and understand what it officially finds troublesome. We are not all the same, and certainly not all treated as equal, so any attempt to impose a sense of problem-free uniformity will inevitably come across as disingenuous, dull or just plain dumb.

A selection of Ohm Phanphiroj's indelibly beautiful and infamous photographs of underage, topless, Thai male streetwalkers are included in "Night Shift", an exhibition that provides glimpses of the lurid, strange glamour and mostly dramatic landscape of nocturnal hedonism and its detritus. The ambiguity of Ohm's works _ what is he saying about the lives of these kids? How can these photographs aid understanding? _ claim an important power for photography: we don't know how to look at them and therefore they avoid a partisan, overly ideological view which could insist that images do, or say, one thing or another (like that TAT campaign!). Further, Ohm's photographs forcefully raise questions about ethics and representation _ what does it mean to reveal the identity of these kids? _ but, in doing so, he confronts issues around the function of art and photography. If art serves an affirmative or moral function it is not doing what it does best: exploring humanity in all its terrible variety.

Or, as a novelist I admire once put it: "When I write, I can **** on my father's grave and **** children, it is not my job to say these acts are right or wrong. As an artist, I say they are possible and therefore happen." And, anyway, so long as we are arguing about the ethics of Ohm's photographs, we are doing nothing about the children themselves (or, worse, we think we are).

"Night Shift" reveals itself as a powerful exhibition in terms of questions of ambiguity and ethics and what it means to represent marginal denizens, the destitute, the caught-unawares and the mess-ups of nocturnal lawlessness. From Cherdwood Sakolaya's black-and-white shots of grinning, sexy and languorous homeless to the doll-like but cynical poses of Bangkok go-go girls captured by Ekkarat Punyatara.

These photographs don't reveal or instruct, but quasi-celebrate all that would attract anyone to the very idea that nothing, for the moment, needs to make any particular sense.

So beautifully produced they seem almost handcrafted, Thapphawut Parinyapariwat's photographs of neon signs of stylised, big-breasted women momentarily put into relief the visceral qualities of other works in this exhibition. Not melancholic, they nevertheless hold a distant, cool objectivity towards the sensational, while maintaining seductiveness. It is said photography can function as a means of memory, but in Thapphawut's works memory appears less past than we would expect. Caught in a rhizomatic relationship between then and now, perhaps unable to forget or refuse beckoning neon.

Benya Hegenbarth captures the distinct ambi-sexuality of Bangkok's nightlife, its glamour and potential squalor. While Ponlawat Poungsiri images those who deal with the often destructive consequences that an abandonment to nightlife brings.

But, again, there are no instructions or lessons in "Night Shift", and, no "exposes" or voyeurism or sanitised views, nothing that anyone can push against and declare "this has got nothing to do with me". And "Night Shift" achieves this because it refuses the pieties that would declare any of us as better than someone else, in spite of our individual flaws.