Sporting a sleek moustache and beard makes him look respectable, said David Asavanond, but actually it's his facial hair that lends him his distinct roguish appeal. 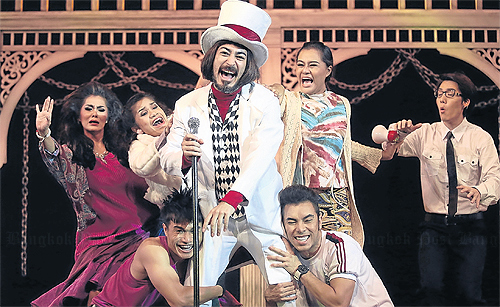 In the spooky comedy Mondum Complex , David Asavanond gets to sing and dance, showcasing his skills as an all-round entertainer.

"I could shave but that would make me look too young," said the 38-year-old actor, whose star is on the rise after he earned critical plaudits and bagged three prestigious awards for his role as a psychotic torturer called Jesus in last year's Countdown.

Suddenly Asavanond has become that rare breed in Thai showbiz: an actor who is capable of acting and has a passion for the profession.

This month, Asavanond's bad-guy magnetism has landed him another juicy role. From now until June 22, he's playing the evil sorcerer Geiji Moo in the play Mondum Complex, which is claimed to be Thailand's first 3D theatre production (see sidebar).

Playing Jesus on screen, however, was a revelation for both the actor and viewers. In the film that catapulted him to fame _ even though Asavanond has had experience in Off-Broadway plays in the US _ Jesus (pronounced "Hay-soos" in the story) descends like an angel of death on three Thai teens living in the Big Apple. The kids are holding a New Year's party in their apartment when the sadistic hippy-looking drug dealer Jesus joins them in a horrific countdown that leads to a long stretch of confessional nightmare that changes their lives.

"Very self-centred and weird, Jesus is a motormouth who keeps on talking. In short, he's ostensibly bad but ultimately good and that throws the audience in the end when he turns out to be some kind of holy spirit that comes down to punish the kids," Asavanond said of the character that won him best actor awards at this year's Subhanahongsa and Tukta Thong ceremonies, as well as from the Bangkok Critics Assembly.

"The awards kind of set a standard for myself as well as for the audience, who I can't let down. I have to live up to their expectations," he said.

The accolades mark a huge comeback for the half-Thai, half-French actor, who left Thailand seven years ago to study acting in New York where he had opportunities to perform in Off-Broadway and Off-Off Broadway productions. His stage role in Mondum Complex, now showing at M Theatre, is his first theatre appearance following his return. 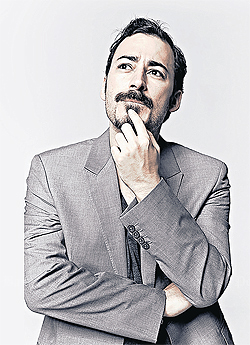 ''Around 10 years ago, when I was 28, I had a chance to do some TV hosting and acting, which was absolutely a dud. So I needed the training and to study straight acting, meaning that I don't sing and dance because I'm not good at those,'' he said. ''Off-Broadway and Off-Off Broadway shows are mostly dialogue-driven plays, and I was fortunate to have gained acting experience from them.''

Asavanond earned a degree in psychology from Boston University in the late 1990s, and in 2008, he received a certificate in acting.

We can't help making the connection: the man with a psychology degree has made his name playing a sort-of psychopath, and while his educational background helps him analyse and understand characters in order to make them come alive through his acting, he's still fathoming Geiji Moo, a weird and wacky practitioner of black magic in Mondum Complex.

''I still don't really know the psychological aspect of Geiji Moo. But I know that he's strange, irrational and unpredictable and I have to play with the unpredictably of this character and make him colourful but with a tinge of darkness,'' he said. ''This character has me doing bad things but he has his charm and cutesy quirks.

''Both Jesus and Geiji Moo are weird. But Jesus seems to be one thing throughout the movie, whereas Geiji Moo reveals different flavours of his evil side in the play, to keep the audience questioning the character. For example, is he gay or is he straight?''

The supernatural comedy challenges him to sing and dance, and he now finds himself having these skills to be an all-round entertainer.

In person, the outspoken thespian is as larger-than-life as the characters he plays, and he admits that he walks out of each role with a different chemistry in his personality.

''You can't have a small personality, and a good performer needs to be larger-than-life. Even though you're quiet and an introvert, your heart and soul, your imagination, your dreams have to be big,'' said the actor, who lived a big part of his life abroad which contributed to his strong and straightforward personality. In Europe he even found himself working as a waiter and a butcher, but all along he wanted to be an actor. And David is actually a nephew of one of Thailand's most famous actresses of the 1960s, Amara Asavanond.

''Acting is fun and I don't feel like I'm working. In addition, I have lived my life to the point where I can't do the same thing over and over every day. I don't like routine and acting is not a routine thing,'' he said.

In his late 30s, Asavanond returned to an industry in which good-looking teens quickly rise to stardom. Does he find himself a good fit with the Thai entertainment business?

''I can fit in as long as people know where I come from,'' he said. ''I'm not aggressive. I'm only expressive and like to speak my mind and say how I feel without offending people.''

The award-winning actor doesn't care if he has to play a bad guy all his life. Because he can't sell his face, he only has acting skills and experience to offer the Thai entertainment industry.

''I believe that you have to be an experienced human being in order to be a good actor.

''And, say, at under 25, what do young actors know about life? They know nothing,'' he said. ''Marketing makes them products with pretty faces and that sucks.''