The future may have already arrived; well, for those of us who live in Asia's cities. As is regularly and widely reported, the rapid rate of urban growth and change in this part of the world leaves most of us reeling. As soon as we begin to understand the present, it is usually already past. 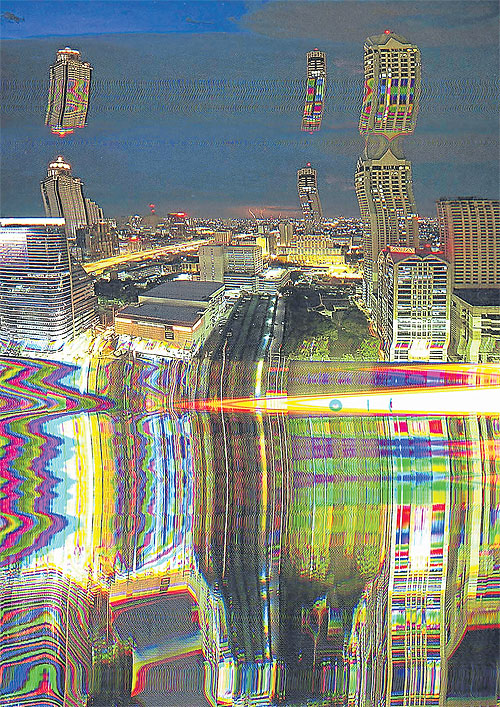 But Shanghai is not Bangkok and Phnom Penh is definitely not Dubai. Beyond the broad strokes of history-unfolding-before-your-eyes, how do we understand local differences? For Bangkok, the city is typically distinguished by signs of ancient beliefs that persist on every street and in many buildings, and most postcard views. Be they glittering temples or spirit houses strategically positioned near the entrances to multiplexes or the stages in go-go bars.

Any number of artists, writers and academics have explored this conjunction of sacred practices and decadent secular consumerism, and most offer a new spin on an endlessly fascinating topic. The British artist Gareth Proskourine-Barnett recently entered the discussion.

Gareth has just completed a four-month artist residency in the Faculty of Fine Arts at Chulalongkorn University and has mounted an exhibition "Brutkok: Distorted Landscapes, Future Ruins And Spirit Houses" at the Chulalongkorn University Museum. The press release for this exhibition quotes the great US architect and academic Brian McGrath: "Bangkok is a copy with no original. It is a hyper-modern milieu of surfaces and signs without an authentic centre or origin over-occurring within the same space of ancient beliefs, practices and rituals."

How did you come to do this residency?

As part of my undergraduate studies at Birmingham City University [BCU] years back I had the opportunity to come and study at Chula. I had an amazing time and thought it would be great to come back. I now teach at BCU and proposed a summer residency. Luckily they had a scheme in place for international artists and the lecturer, Araya Srikanlayanabuth, shared my love of Brutalist architecture, so a plan was hatched to come for four months, teach and work towards an exhibition.

Architecture defines our experience of the city and it can provide a visual language for addressing the contradictions of contemporary urban life. I want to create artwork that uses architecture as a medium from which to critique living and working environments. As a visual artist I am naturally drawn to certain things over others within the urban environment. For example, I love the raw physicality of Brutalist architecture and am fascinated by the concept of Utopia especially now that the very act of dreaming, or considering a brighter future has become, in itself, an act of nostalgia. My work normally begins by walking to specific sites, exploring a sense of place and the physicality of space.

What is your perception of Bangkok in this regard? 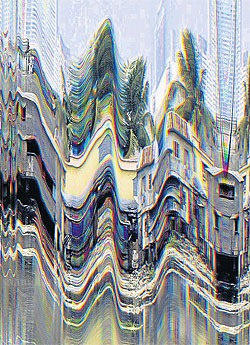 I love the expression "same same but different"; that really encapsulates the city and the attitude of its inhabitants for me. Bangkok is a fascinating city and really unique; it's simultaneously a combination of Eastern rituals and traditions alongside a hyper-modern version of Western capitalism.

Buildings like the Sathorn Unique Tower, which was never completed, have inspired my work. It was a victim to the economic crash of 1997 and whilst new buildings continue to be constructed around the city, the Sathorn Unique remains abandoned. In 1998 the Sathorn Unique was 80% completed when the project crashed; a pack of dogs now lives on one of the floors. A short distance from the site of the Sathorn Unique is the State Tower on Silom Road, which was completed in 2001. Despite their differences, the two buildings look remarkably similar, even sharing the same neo-Grecian balconies. What becomes apparent as you explore the city of Bangkok is that you don't need to go to Ayutthaya to see the ancient ruins; they are already looming over you. The buildings of tomorrow are the ruins of today.

Say something about the artworks you have made on the residency.

The work projects an alternative future for Bangkok. Just like Ayutthaya, the city is abandoned _ tourists visit to wonder at a strange civilisation. The work subverts the romanticism for ruins by examining recent examples of architectural ruin instead of the palaces, temples and ancient ruins that have been preserved for tourist or nationalist purposes.

There are four main segments to the exhibition. The first is a pair of concrete rubbings printed onto Thai silk. The same image is presented twice, manipulated slightly differently. I wanted to explore contrasts in Bangkok through material: a drawing collected from the texture of a building is printed onto silk; luxurious and decadent, but the remains of a ruin.

I have made a series of spirit houses that reference construction sites and the transferable nature of everyday street materials, where car tyres transform into plant pots or street signs. The sculptures feature bricks and stones found in the street, either cast in resin or covered in gold leaf, ceramic structures that appear on the verge of collapse and scaffolding systems that have no function. They are monuments to the un-built voids that occupy the landscape. I am always interested in pushing the boundaries of drawing. Over the [course of the] residency, I have been experimenting with a digital scanner. Postcard images are presented on light-boxes, manipulated through the scanning process to distort the landscape. The act of drawing becomes trapped in a moment in time.

I feel like the work I have produced could only have been made by being in Bangkok. I have tried to avoid a lot of the obvious cliches about the city and challenge my own working practice. Simply, the work is an attempt to observe and understand. 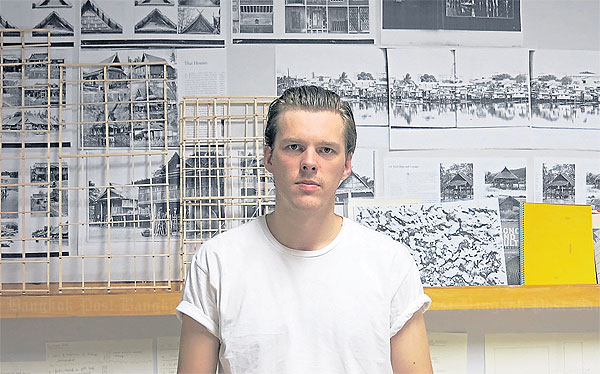