You say that, as a classical collector, there are at least 74 recordings that you need to buy before investing in yet another version of Bach's Brandenburg Concertos? That you already have a version of choice (possibly Alessandrini's or Gardiner's most recent account), or maybe several, that aren't likely to be superseded in your affections any time soon? Listen to a few excerpts from this set on the Linn Records website and you may decide that there is still room on your culture shelf for one more set. 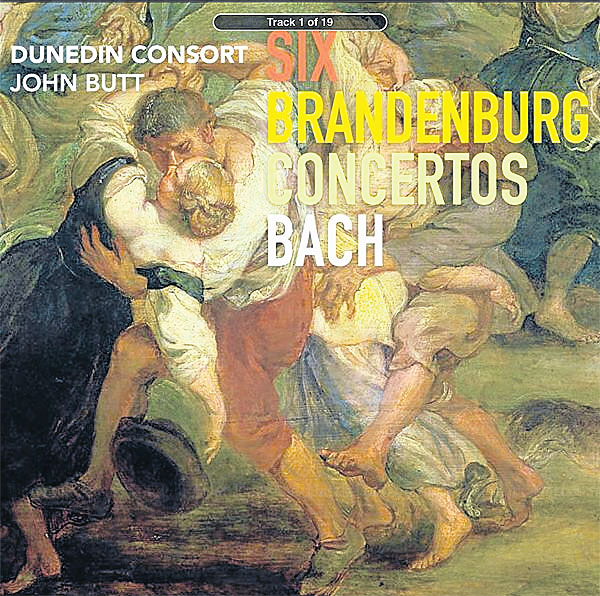 The Dunedin Consort have already made a number of lavishly-praised recordings of music by Bach, including accounts of the St John and St Matthew passions and the Mass In B Minor. I have not heard those, and have held off after learning that they used the one-voice-per-part performance style in the choral passages, an approach, however correct historically, that I have resisted so far. But this recording of the Brandenburgs, their first of purely instrumental music, is so close to my personal ideal that I may return to the Linn site and do some more downloading.

As the First Brandenburg Concerto begins, listeners who know Gardiner's account will notice that the horns have the same brash and raw sound. In his detailed notes to these performances, conductor John Butt points out that in courts like Coethen, where Bach was working at the time when these concertos were composed, hunting stood in for military might, and that the horn players, who were usually also trumpeters, where the highest-paid musicians in court orchestras. The more horn players of high quality that a prince had in his employ, the richer his court appeared.

Butt goes on to mention that there is evidence that the concerto still plays well if the horns are omitted, and that Bach may have permitted this practice "as a critique of social hierarchy", but also that "the horns contribute immensely to the style and ethos of the piece with their unabashed hunting calls. Indeed, Bach seems to have gone out of his way to make the horns clash against the rest of the texture". Listeners will be happy that Butt stuck with sonority rather than politics here, as it is the raucous sound of the horns, played for all they are worth here, that gives the piece much of its character.

No one can imagine the Second Brandenburg with the trumpet omitted or replaced by another instrument. In this recording it is played with the greatest virtuosity by consort member David Blackadder and recorded in a way that allows its silvery tone to blend naturally with the ensemble. In traditional recordings the instrument strands out so prominently that it completely dominates the busy discourse. Here it participates with the other instruments as an equal, lending its special personality and colour to the musical phrases it discusses with the oboe, recorder, and violin, so that the piece doesn't seem as much like a trumpet concerto as it does in many other accounts.

A similar approach is used in Dunedin's irresistible performance of the Fifth Concerto. Despite the starring role given the harpsichord in the opening Allegro, it is not given the kind of spotlighting and enhanced sonority that it has in most other recordings. Here the instrument, played by conductor Butt himself, is allowed by the recording engineers to retain its natural timbre and dynamic, so that it doesn't shove its way forward for a star turn. Its sound and presence in this recording are ideally balanced with those of the other instruments, much as the harpsichord is in the Prausnitz recordings of Elliot Carter's Double Concerto discussed in this column a few weeks ago. A challenge to the engineers, and well met. Butt plays the big cadenza in the first movement with great virtuosity, although without the ferocity Renaldo Alessandrini brings to it in his own performance on the Naive label.

Butt's notes to this release make it clear that he has researched the Brandenburgs and their performance tradition in the greatest detail, and has made used of his knowledge in these accounts. One major result is his adopting of a pitch lower than the one notated, reflecting what he believes is close to what was used in Bach's performances at Coethen in an ear where pitch was not strictly standardised. The enrichment of tone permitted by this downward tuning is especially noticeable in the dark string sonorities of the Sixth Concerto. But there is no scholarly dust on the performances, which are thrilling and vibrant throughout, with brisk but not excessively fast tempos.

Listeners who have players that can handle high-resolution FLAC files should consider going to the Linn website and buying the Studio Master version (24 bit 192 khz), which requires a hefty 4GB download. It is also available as lower resolution downloads and also as a set of multichannel CDs. But the sound of the Studio Master recordings is absolutely spectacular, with the presence of the instruments almost tangible. As a set of performances, Dunedin's versions are a good first choice along with Alessandrini's.