An American in Klong Toey

Now you can learn about the livelihood of slum dwellers in an art gallery. 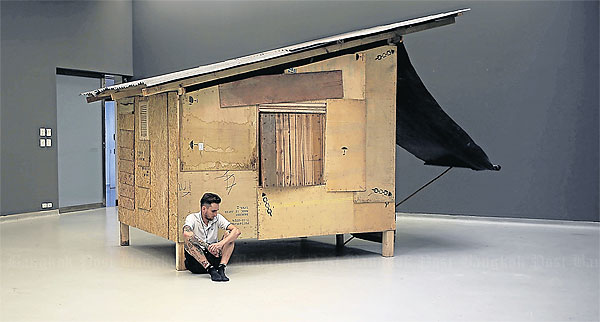 An installation by Phil America.

The atmosphere of Klong Toey and its famous slums is filling the gallery of Bangkok University as an American artist has moved a slum house of his own to be put on display there until the end of next month.

Phil America, a California-born, New York-raised photographer/artist/writer with a degree in psychology, moved to the Klong Toey slums, had a house built by a local carpenter in the same architectural manner as the other homes in the area, and interacted with the locals to achieve a better understanding of the area and life there.

The home, moved to the gallery with all of its contents, is presented with a multi-channel sound installation, traditionally used in cinemas, playing sound recorded in and around the house to give a 360-degree experience to the viewer taking them outside the gallery and into the heart of the slum.

Along with the house and sound installation is a video projection showing the entire process mixed with video from the surrounding area and the school itself.

Phil's home is filled with artifacts used during his stay, along with the work of Thai artist Orawan Arunrak. Her work includes small, postcard-sized acrylic paintings on canvas hidden throughout the house.

The paintings depict a dream-like version of well-known, high-end furniture unobtainable to the inhabitants of the community or the young students of the university.

She uses the language of art to show the ideology of dreams and goals in an easily digestible manner and projects the time she spent in the slums and at Bangkok University conversing with them and observing their way of life.

Called "Villa in the Slums", the work aims to bring about some engagement, exceeding the exhibition, with the neighbourhood and its inhabitants and take on an ongoing dialogue on social cohesion with both viewers from outside and the university's students, as well as bringing local and global awareness to the one third of the world's urban population living in slum housing.