When discussing LGBT, the letter that sometimes gets the least airtime is L, which represents "lesbian". While coverage of gay and transgender people seems to have increased, lesbians remain a minority within the minority. As a reporter interested in the issue, I always want to write more about the lesbian community in Thailand and elsewhere. 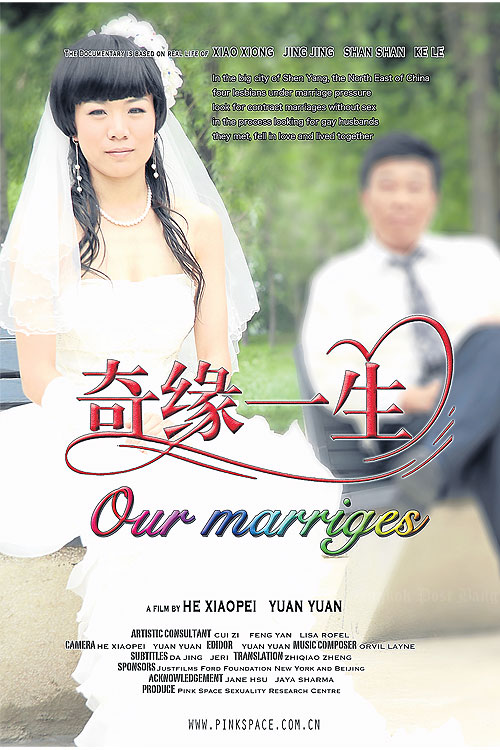 Last week I got that chance when Anjana Suvarnananda, the founder of Anjaree _ Thailand's leading lesbian advocacy group _ informed me of the world premiere of Our Marriages, a documentary about a group of Chinese lesbian women and their marriages with gay men in order to fulfill their parents' wishes.

The film was first screened at the Queen Sirikit Convention Center, but I viewed its second showing at Film Archive Cinemateque at Bangkok Art and Culture Centre, where He Xiaopei, the film's director, along with the four lesbian women who appear in the documentary, were present to answer questions from the audience.

A Chinese friend once said it is tough being a woman in China, but it is tougher when you are a lesbian. After watching the 75-minute documentary, I had to agree with him.

Our Marriages follows the lives of four young lesbian women from Shenyang, a metropolitan city in the northeast of China, from 2011 to 2013. We see two loving lesbian couples who share the same apartment and listen to their stories, from struggles with their sexuality to love affairs to marrying gay men to please their families. The venue was small, but the screening was full.

Before the film, the organisers asked the audiences not to take pictures of the lesbians, who preferred to keep their names anonymous because their families do not know their marriages are bogus. Organisers also said, however, pictures posted on social media outlets wouldn't reach China anyway because websites such as Facebook and YouTube are blocked in the country. Moreover, news that refers to the existence of the LGBT community in China will most likely never appear to the public.

Gays and lesbians who are not "out" usually experience pressure to marry, but it is especially serious in China, where people over the age of 25 are expected to wed by family and society. It is, as said in the film, a child's duty to do so for their parents.

The documentary's subjects introduced us to what is called a "contract marriage", in which a lesbian woman and a gay man marry one another to avoid family pressure. Contract marriages have become an answer to a number of gays and lesbians in China. The women used the internet to their advantage, creating a special chat room in which to look for gay men who faced the same problem.

The film didn't follow their dating process, but recollected their stories in interviews, photographs and wedding video footage.

There are many interesting scenes in the film. One of the women, who usually dresses in masculine outfits, appeared at her wedding _ which had one of the most fancy receptions I have ever seen _ as a beautiful bride. In the end, though, she said her wedding ring was just a giant fake diamond, a prop. According to the film, wedding ceremonies have to be as big as possible so that parents will not "lose face". Another scene has a guest wishing the bride to "get pregnant with a baby boy" as soon as possible, showing the importance of being a man in Chinese society.

The film also discusses the movement of same-sex marriage. One of the subjects, however, said she believes that even if same-sex marriage is legalised, gay and lesbian couples will still have to marry a member of the opposite sex, because people will still be against same-sex relationships.

At the end of the film, Xiaopei explained that the project started as part of her non-profit organisation Pink Space, which supports people with different sexual identities. The idea for the film stemmed from her advocacy work. The four lesbians in the film were also members of the organisation and volunteered to share their stories and struggles.

At the end of the film, one of the women says she is not proud of her fake marriage, but the idea of the film is to allow audiences a glimpse of Chinese society, which suggests that unmarried people are failures and that same-sex relationships are taboo.

I asked the women whether there was also pressure placed upon them to have a child. All four nodded, and each had a plan or excuse to avoid the issue. Xiaopei said perhaps this would be the subject of her next documentary project.

Our Marriages, to me, is more than a story about four lesbians and their fake weddings. It is a love story, albeit a bittersweet one. It shows how much one does for love, even when it means having to deceive those closest to you. There's a thin line between right and wrong.